Animals that aren’t naturally found in the wild here in Singapore, like rabbits, may not know how to fend for themselves without human care.

That was unfortunately the fate of 13 rabbits which rescuers found at the void deck of an HDB block in Clementi. 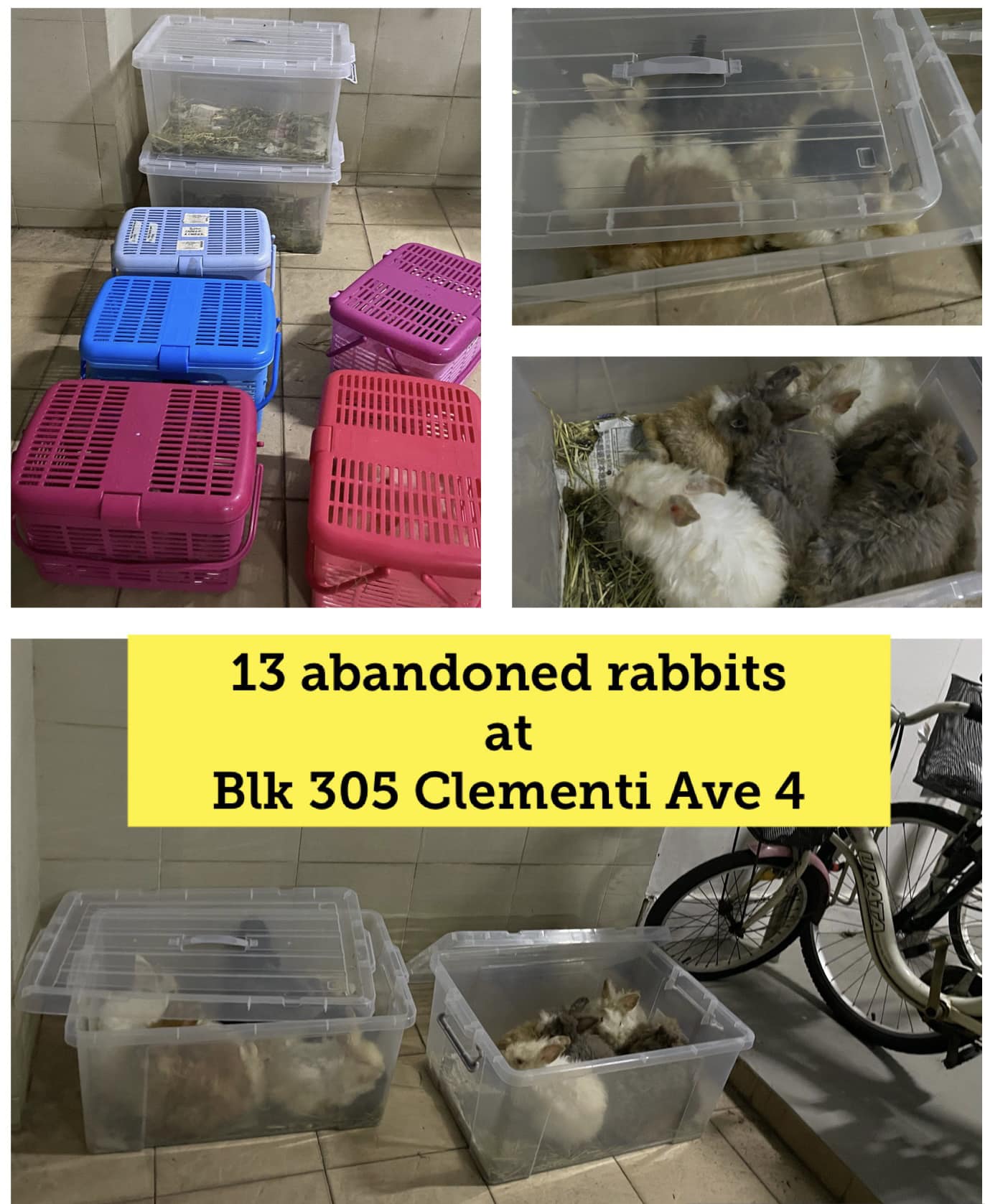 The creatures apparently had matted fur and were crammed into two plastic boxes.

In a Facebook post on Thursday (1 Dec), HRSS shared that a foster parent had made an emergency call at about 10.45pm on Wednesday (30 Nov) night.

Her friend reportedly found rabbits abandoned at an HDB void deck in Clementi.

While they couldn’t afford to bring the bunnies home, they stayed till rescuers came to pick the furbabies up.

Upon arriving there, HRSS volunteers found two large plastic boxes full of rabbits. One was fully open, while the other was partially covered. 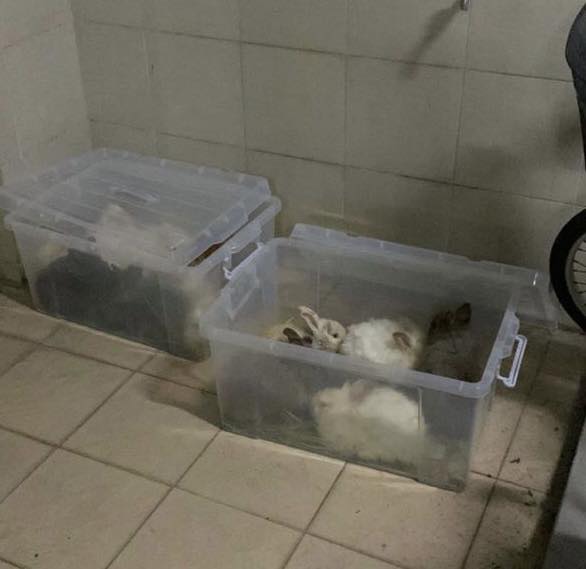 Afraid that some bunnies may have hopped out, the folks who found them went in search of possible escapees. But since the rabbits appeared scared and stayed in their boxes, they came to the conclusion that all of them were there.

Thankfully, volunteers brought carriers with them, into which they transferred the rabbits. They then discarded the plastic boxes.

At first glance, they noticed that the bunnies, which looked to be a Wooley/angora mix, had matted fur stained with pee. As a result, they reeked pretty badly.

Volunteers took them back to HRSS to rest for the night before planning their next steps.

On Thursday (1 Dec) morning, volunteers took the rabbits to a vet, who determined that seven were male and six were female.

They also discovered that the bunnies have various medical issues that would require treatment over the next few weeks.

Since they require proper care, a good diet and an environment to heal, HRSS will be taking in the seven males. The six females will go to Bunny Wonderland for the time being.

Frustrated by the evident lack of care for the animals, HRSS has reported the incident as an abandonment case to the Animal & Veterinary Service (AVS).

They claim that AVS has gotten in touch to obtain more information.

As investigations are underway, HRSS is appealing for any form of information that could help. Those with info can contact them via Facebook here.

Since the rabbits’ treatment will take time and money, they are also appealing for donations. You may find the relevant details and channels in their Facebook post.

Meanwhile, Bunny Wonderland, who’s helping to care for the seven male rabbits, shared that they are running out of space.

As such, they urgently need fosterers to help take in seven rabbits under their care that are in healthier conditions, temporarily. 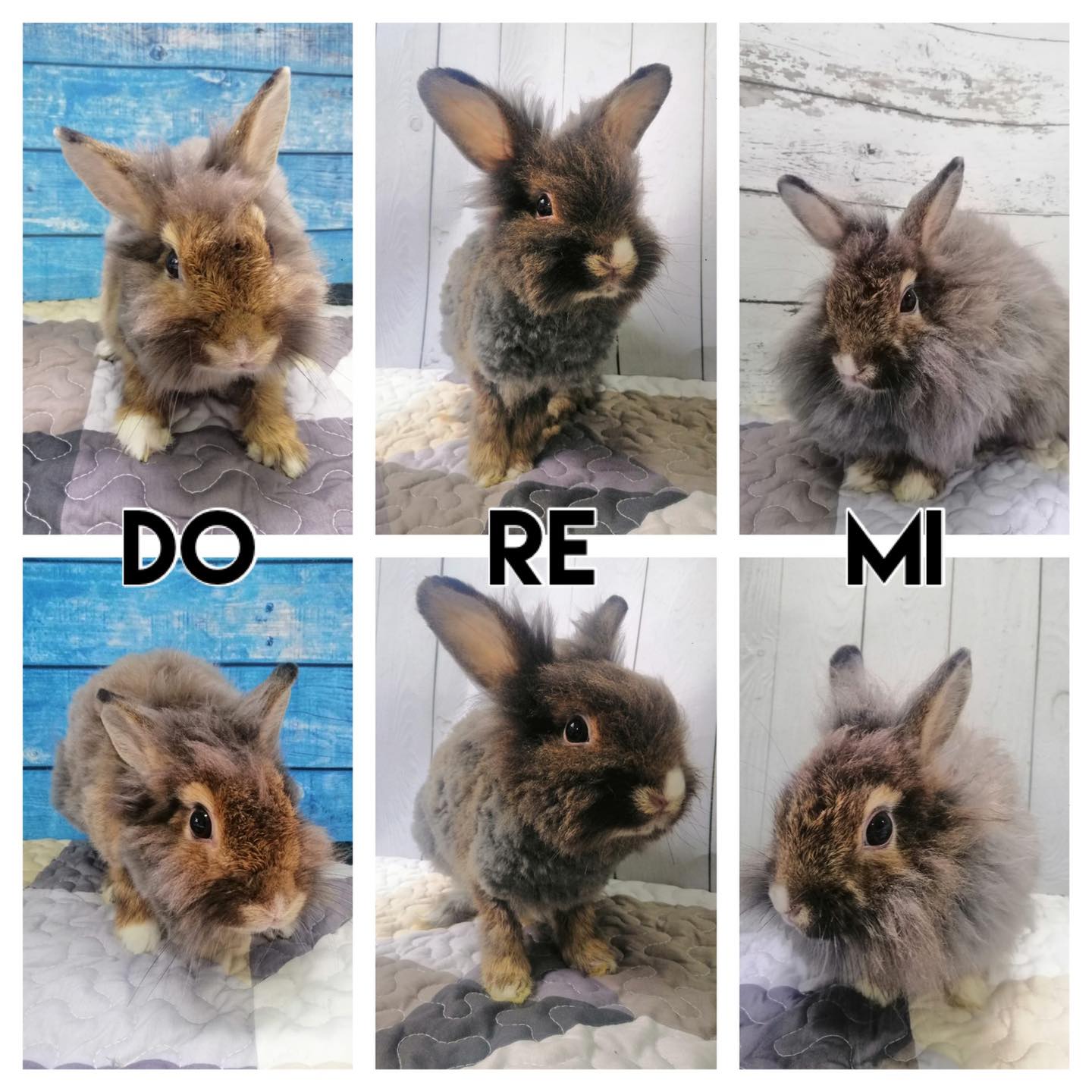 They will cover the rabbits’ vet expenses but will need fosterers to care for the bunnies like their own.

The rabbits’ conditions are no doubt pitiful but we’re glad that kind rescuers and volunteers came to their aid.

Hopefully, with consistent treatment, they can recover from their medical issues and be healthy again.

If you can help HRSS and Bunny Wonderland in any way, do not hesitate to do so. We’re sure any assistance will be greatly appreciated.

We also hope that the rabbits will eventually find loving homes, where they will be cared for properly.