The banner's image drew negative comments when posted in a few Facebook groups.

One indication that National Day is coming is that banners celebrating the occasion will pop up all over our neighbourhoods.

While they always have the smiling faces of our MPs, the faces of ordinary Singaporeans are also included.

Unfortunately, a National Day banner in Tanjong Pagar GRC has drawn negative attention for the family featured in one corner. Responding to the controversy, a national athlete has come forward to say that it’s his family in the banner, and they’re all Singapore citizens.

He & siblings are born & bred in Singapore

In an Instagram post on Monday (2 Aug), Mr Thiruben Thana Rajan identified his family in the banner. 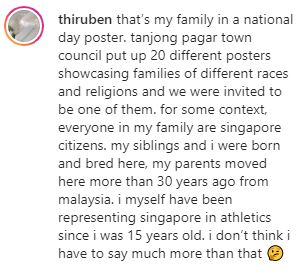 He said all of them are Singapore citizens.

While his parents moved to Singapore from Malaysia more than 30 years ago, he and his siblings were all born in Singapore and grew up here.

Mr Thiruben also said the family was invited to be on 1 of 20 different banners that showcased families of different races, cultures and religions in Singapore.

Indeed, his family wasn’t the only group invited to be on the banners.

There are actually many versions of the banners printed by Tanjong Pagar Town Council, and each of them features different groups of people of a variety of races and backgrounds.

Here’s an example of 1 of them:

Images of the rest can be found on their Facebook page. 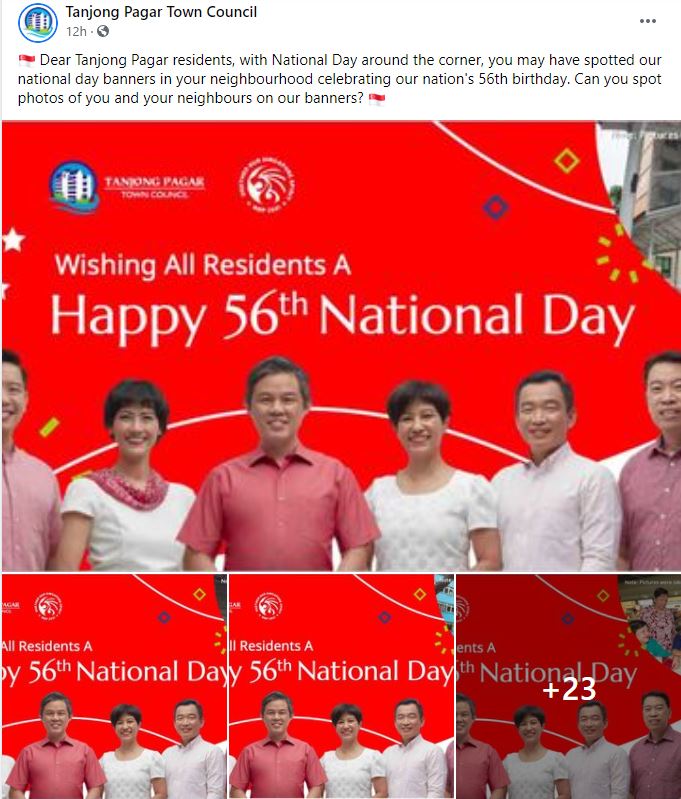 If Mr Thiruben was an unremarkable Singaporean, his explanation would be good enough.

However, he’s done something that many of us haven’t – represent Singapore in athletics.

In fact, he’s been doing that since the tender age of 15, he said. 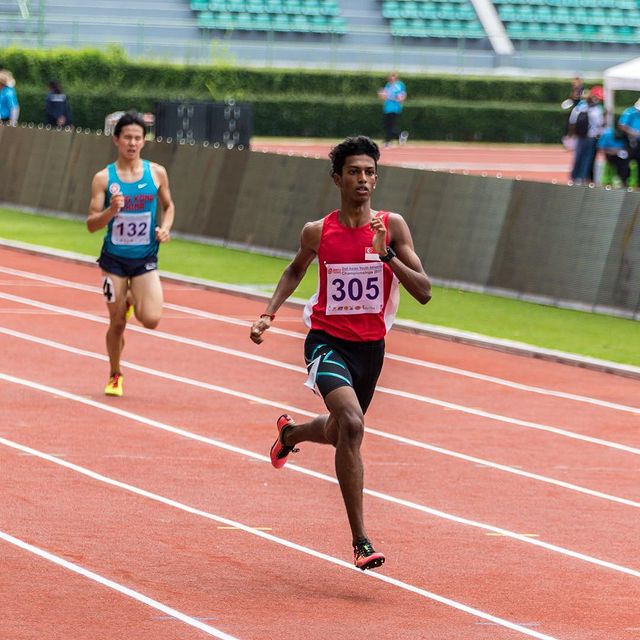 When he was at National Junior College in 2017, Mr Thiruben received a SINDA Excellence Award under the Singapore Schools Sports Council Special National Colours category.

According to a speech given by then Minister for Education (Schools) Ng Chee Meng, he broke a 32-year record at the Singapore Athletic Championships, in the 400m event.

He also set a new national 400m record while representing Singapore at the Under-18 World Championships in Kenya. 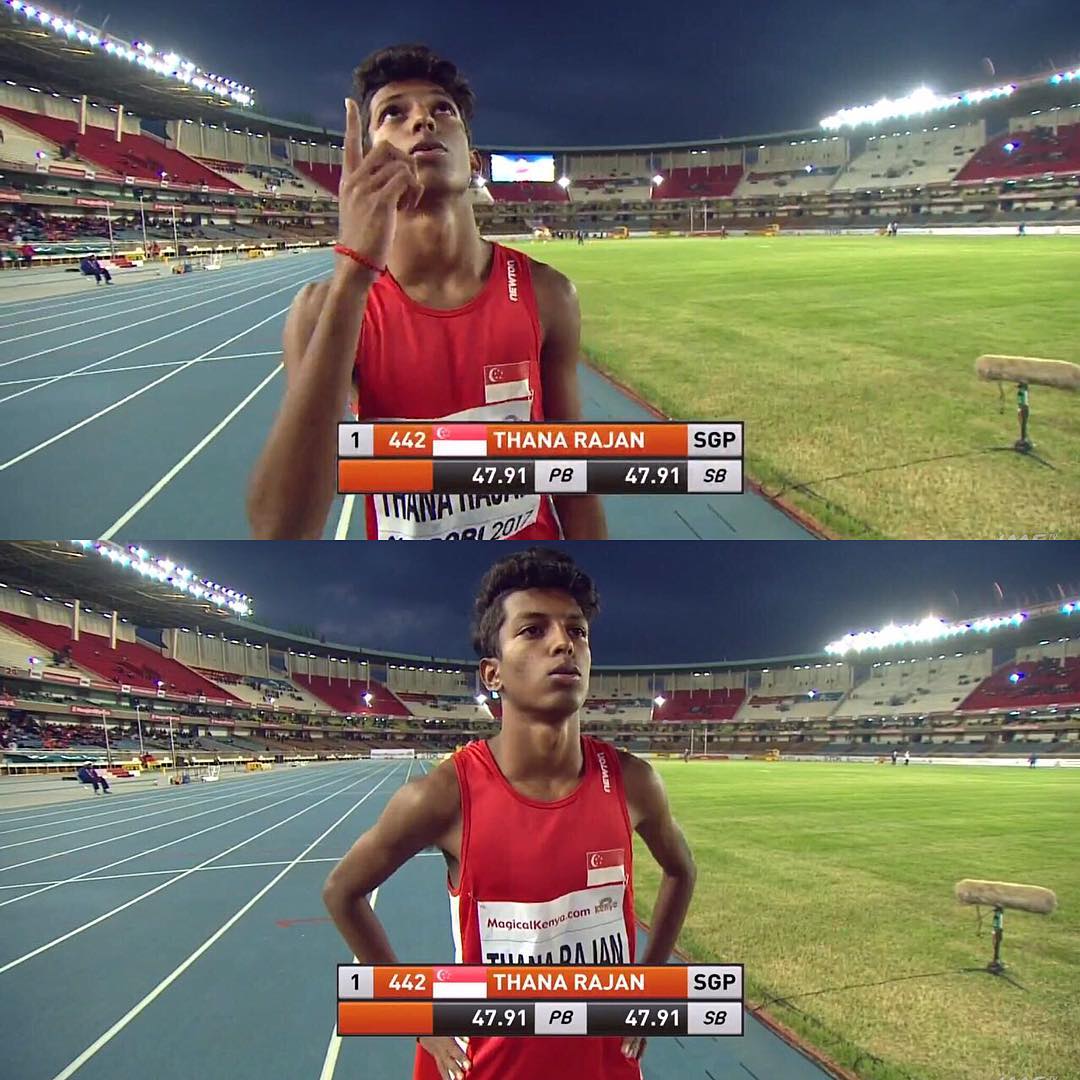 Mr Ng also praised him for his “passion, commitment and discipline towards his sport”, balancing his studies with training 6-9 times a week.

We think that deserves a spot on a National Day banner, don’t you think so?

Unfortunately, some netizens weren’t convinced when they saw Mr Thiruben and his family on the banner.

The image was posted on some Facebook groups, and attracted negative comments.

It apparently tapped into sentiments among Singaporeans concerned about the Singapore-India Comprehensive Economic Cooperation Agreement (CECA).

CECA has been blamed for bringing about social ills and displacing Singaporeans from jobs.

This intensified when the Delta variant started spreading in Singapore.

The consequence was that Singaporeans of a minority race were targeted in attacks both physical and verbal.

We’re loath to repeat some of the comments made, in order not to contribute to their proliferation.

However, Tanjong Pagar MP Alvin Tan – whose mug is also on the banner – called them out in a Facebook post on Monday (2 Aug).

He called the comments “sickening”, as at least 1 of them cast doubt on the nationality of the family, ostensibly based on their appearance.

Another one snarkily suggested that Chinese were “not included in the celebration”.

They do not and should not represent who we are as a people.

Thanking those who spoke up against the comments, he called on Singaporeans to do better.

For Mr Thiruben, it’s obviously distressing to see his family being subjected to negative comments.

He shouldn’t go though this, especially considering all he’s done for our sporting scene.

We wish him and his family all the best, and hope they’ll receive comfort and support from Singaporeans.

Though some might have legitimate concerns over competition for jobs with foreigners, we really should refrain from implicating innocent Singaporeans.