We’ve all heard stories of neighbours complaining about one another’s cooking in recent times.

Although those stories involve residents cooking in their own homes, there is one family who decided to cook bak zhang along their HDB corridor.

A video showing the ‘outdoor kitchen’ was posted on the Singapore Incidents Facebook Page on Monday (22 Nov).

Despite its obvious potential fire hazards, netizens viewed it differently and said it reminded them of the good ol’ days.

The short video shows an elderly woman and a younger man cooking on a charcoal stove along an HDB corridor.

It seems as though the pair had just returned from a shopping trip, with bags of groceries among other cooking apparatus laid along the corridor. Interestingly, they were cooking bak zhang in a tin can, ones used to hold cooking oil.

The stove was also uncovered and charcoal soot splattered on the HDB corridor.

Despite the caption of the video advising against cooking along HDB corridors, netizens had an opposite view of matters.

One comment explained that this was a common sight back in the 70s-90s. Families of all races and religions would come together to share treats during the festive season. 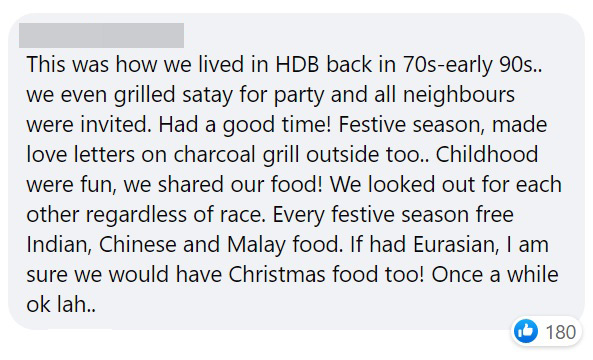 One netizen mentioned that the video clip reminded him of days gone by and how his own grandma used to cook.

Another user shared that this cooking experience does not pose a fire hazard and is only used so their homes would not become greasy during the process.

Although the sentiment seems to be in favour of the style of cooking, residents ought to be extra careful should they choose to cook this way.

Separately, cluttering the corridor may not be the wisest thing too if an emergency were to break out. Additionally, keeping fire safety equipment nearby would be a good shout too.

Some traditions can be kept throughout the years but we must remember that the times have changed and so have the rules.