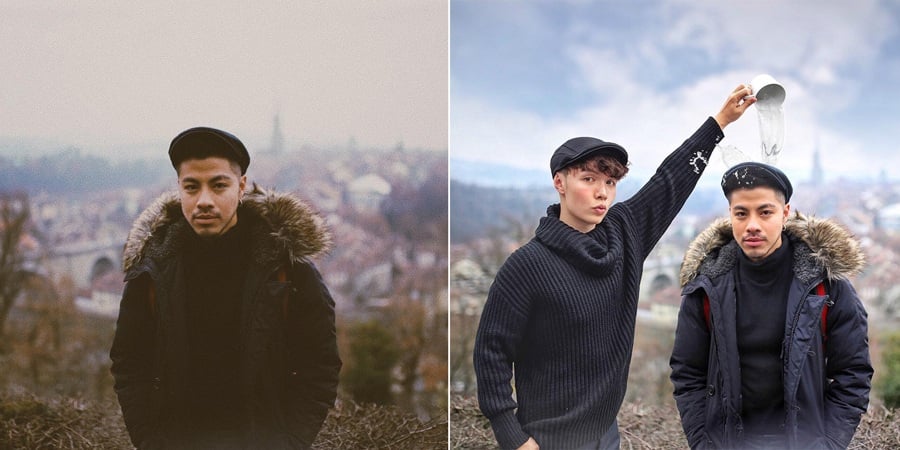 If the name ‘Daryl Aiden Yow’ sounds familiar to you, you’re either a fan or you heard his name on the news some time in June.

The social media star was called out for posting pictures on Instagram that weren’t his, promptly facing intense media scrutiny. After making a public apology, Daryl quietly withdrew into a hiatus.

But in Oct, he emerged from his social media slumber with more followers than before.

This time he would brand himself, not just as a photographer, but also a Photoshop expert. Many of his new posts feature both the edited and original photos. 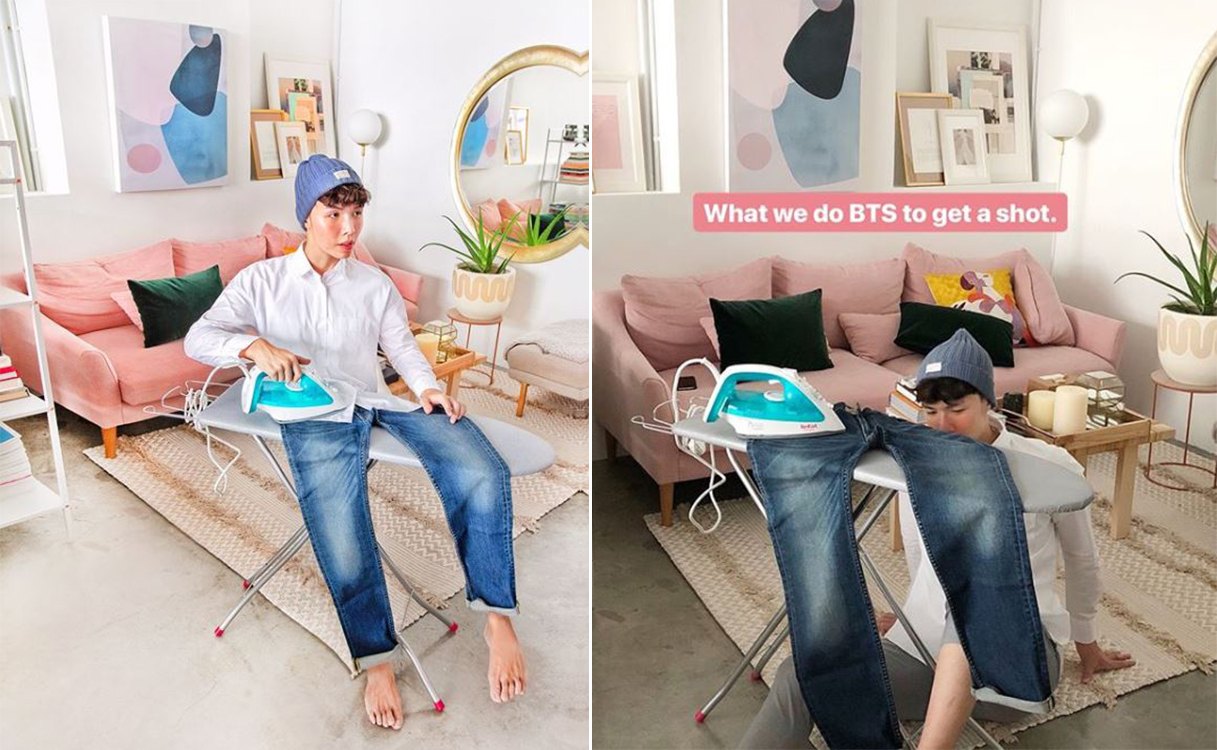 Recently, Daryl started putting up pictures of himself and singer Benjamin Kheng. In one, he was seen pouring water on the head of a seemingly oblivious Benjamin. 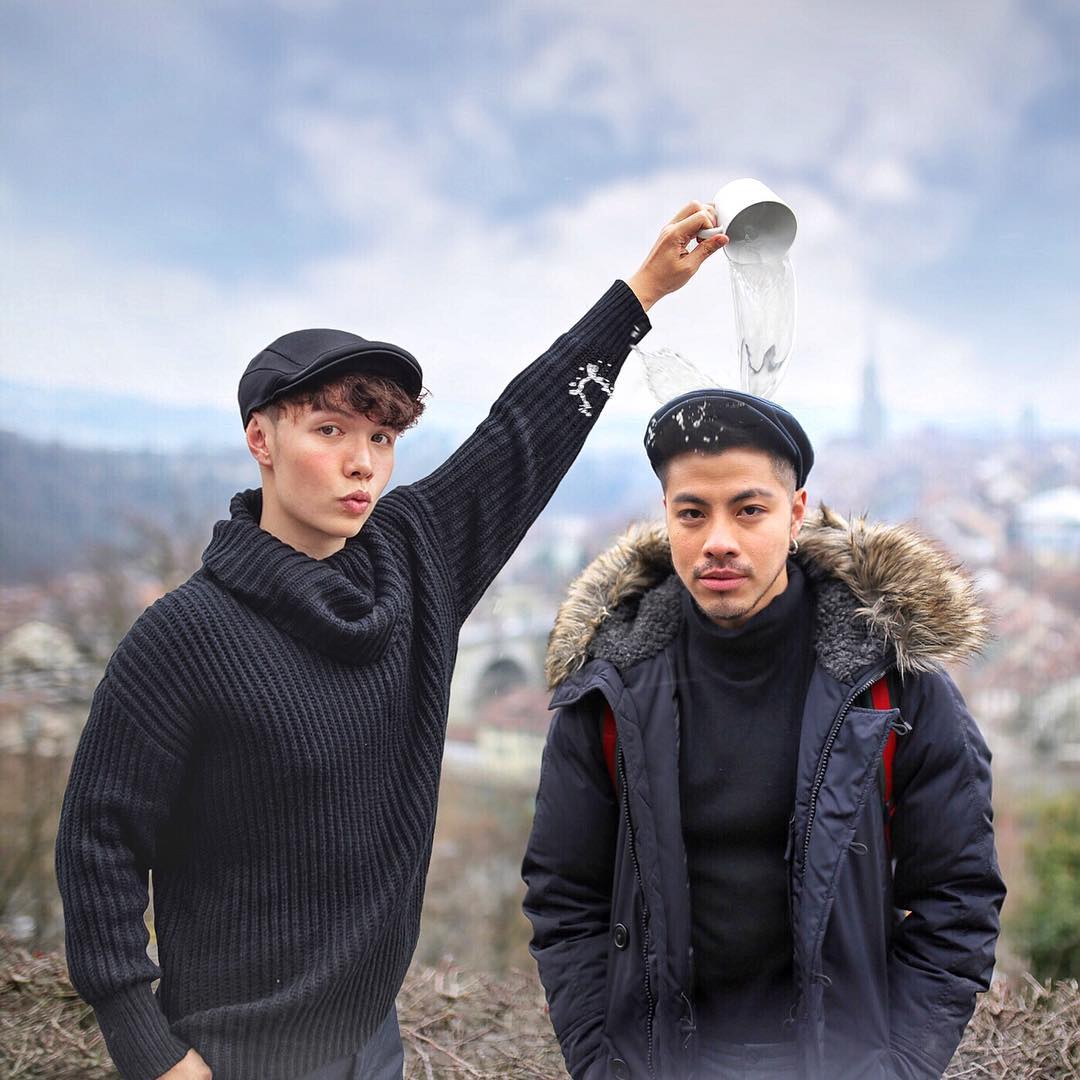 An amused follower hilariously suggested that Benjamin probably didn’t notice the splash as he may have been taking an open-eye nap.

In another picture, Daryl was seen affectionately resting his hand on the singer’s head. Switzerland is pretty cold at this time of the year, leading one follower to ask how Daryl could get by wearing such a thin layer of clothing. 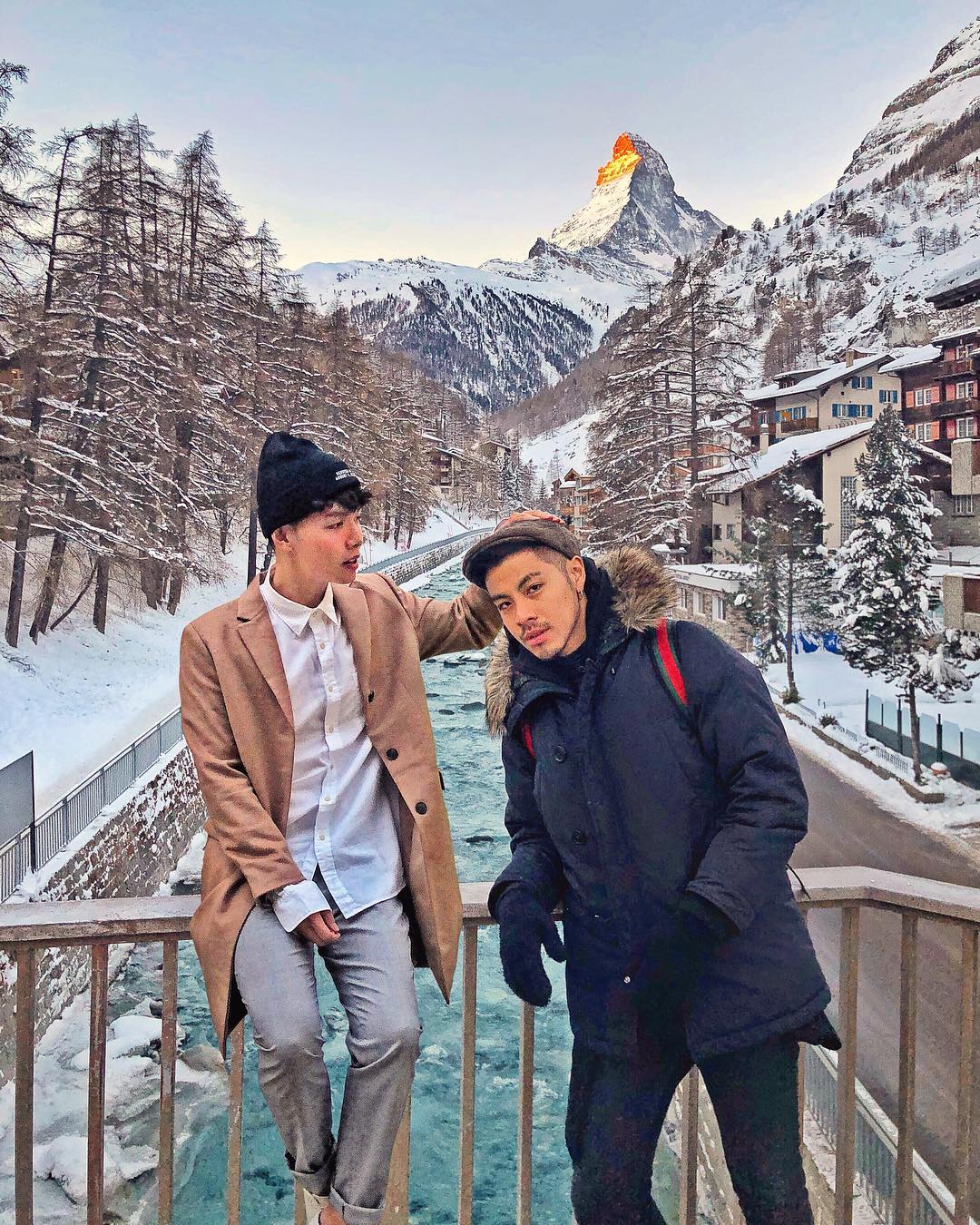 Then came the twist in the story.

Daryl revealed in a tongue-in-cheek post that the pictures of him and Benjamin were all doctored — he wasn’t actually there. He had slid into Benjamin’s pictures with the magic of Photoshop. 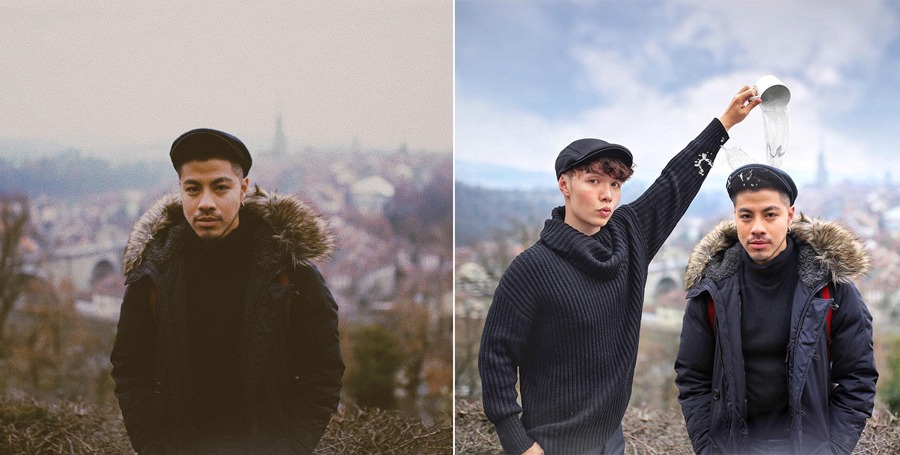 Here’s a side-by-side comparison of the original and photoshopped image so you can play spot the edits. 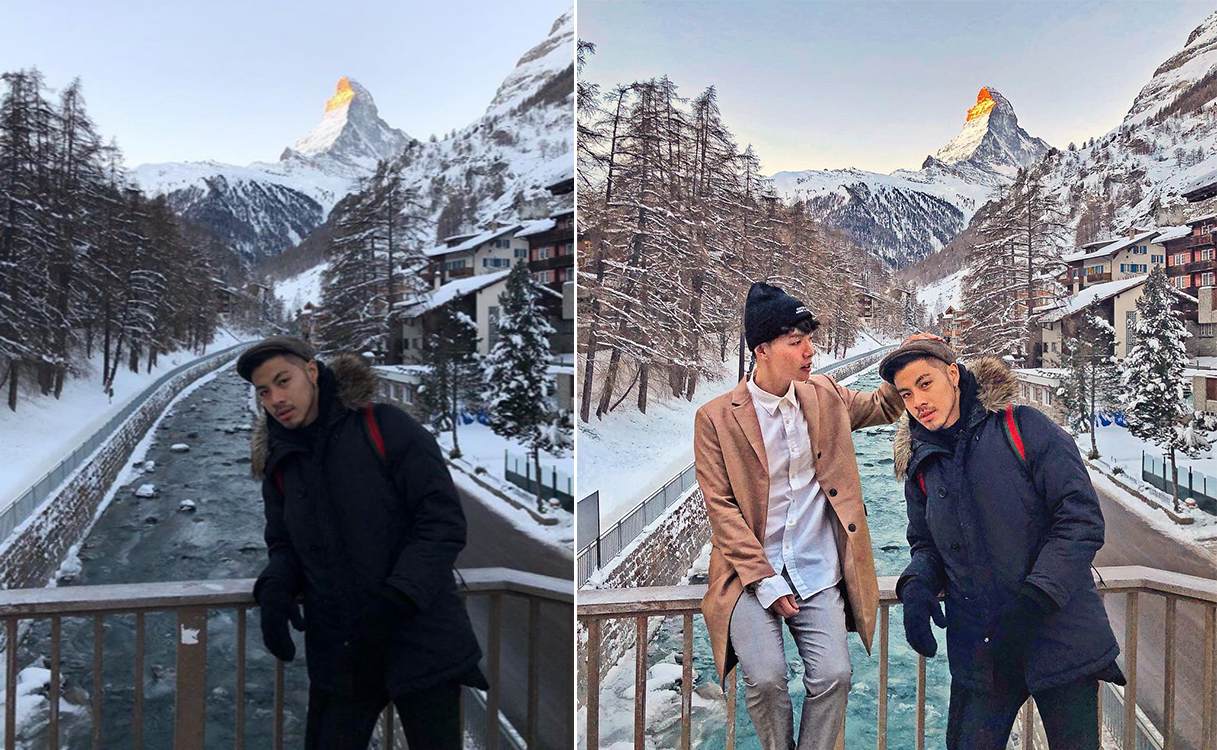 According to Daryl, he had been seized by FOMO when he saw Benjamin shooting in gorgeous Switzerland for his new travel series No Sleep No FOMO. But the problem was, Daryl was stuck in Singapore. So he did what he could — photoshop himself into the fun.

You might as well say that his pictures were ‘FOMO-shopped’.

Personalities like Prettipls and Dee Kosh who stole the show in the first iteration of the #DarylAidenChallenge quickly jumped into the fray to partake in hilarious parodies of his work.

Local comedienne Prettipls had a heartwarming take — romantically inserting herself into a ‘couple selfie’ with Benjamin Kheng. 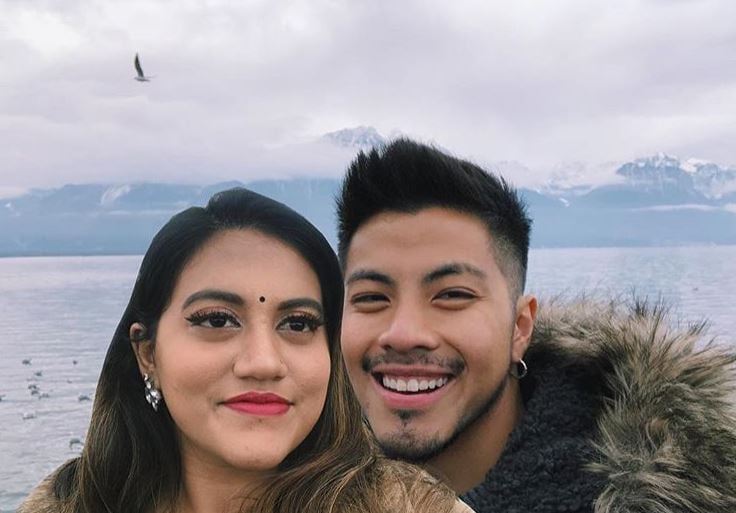 “Baby it’s cold outside ❄ but not in my heart!”
Source

Dee Kosh also laid claim to the Photoshop crown – and Ben Kheng by extension – in his entry that had him plastered all over Benjamin. 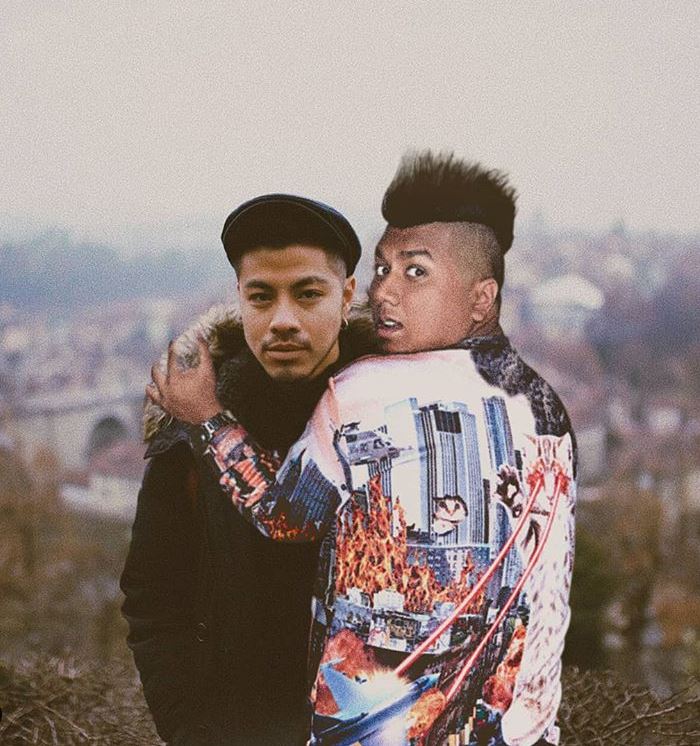 “Ben is all mine pls. No fomo here at all 🙃“
Source

Fans were quick to notice, however, that all of the parodies and posts carried the curious hashtag #ViuNoSleepNoFOMO.

No Sleep No FOMO

So what’s No Sleep No FOMO? In a nutshell, it’s a travel reality show produced by Viu — a media streaming platform that all your K-drama-loving friends will be familiar with.

No Sleep No FOMO sends anchor host Paul Foster, and a guest co-host – in this case Benjamin Kheng – to a random holiday destination. The two will then compete to complete as many challenges from a “FOMO list of 60” as they can within 60 hours.

Doing the math, 60 tasks in 60 hours means 1 hour for 1 task. As the name of the show suggests, both Paul and Benjamin probably won’t be getting much sleep, if any at all. But it’s all for a worthy cause — getting rid of FOMO. 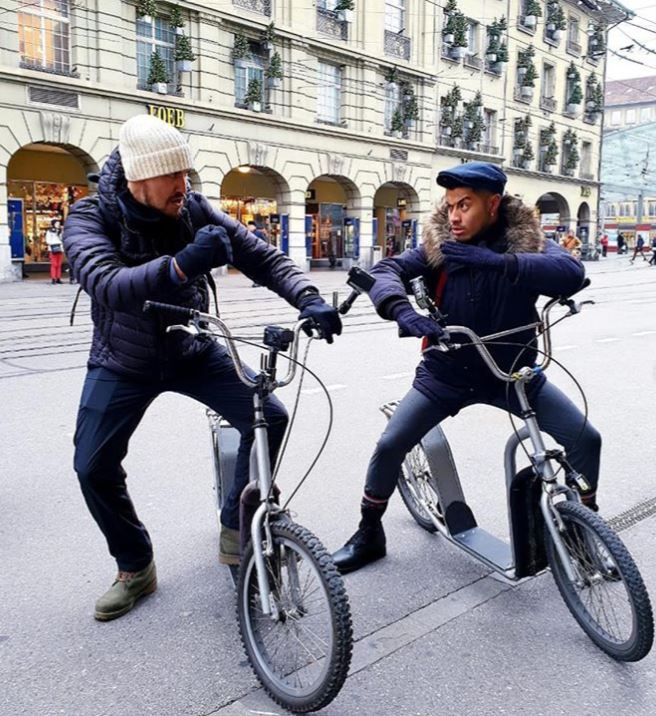 The bucket list of tasks they’ll have to check off range from tourist-appropriate picture-taking to dressing up as pimps in a bar as voted by fans. 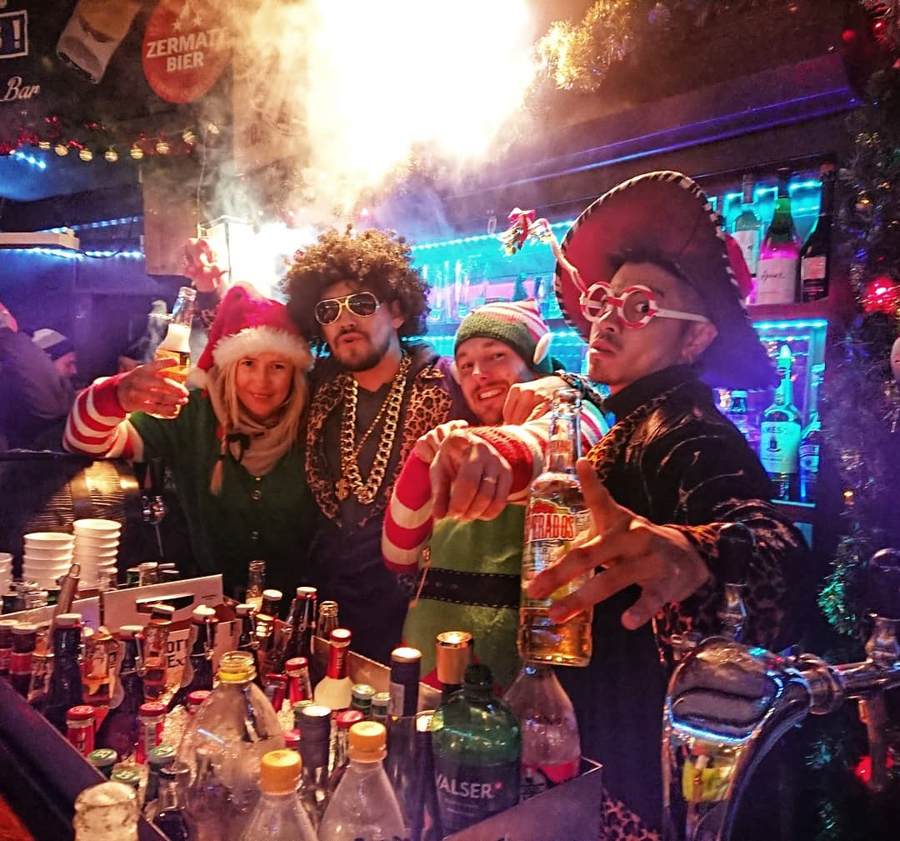 MS News understands that other famous regional stars are also on the roster.

One of the upcoming guests is a famous Korean star who’ll be gracing our shores with Paul in the near future.

So if you’re into handsome Korean oppas or noonas, you’d best keep your eyes peeled. All you have to do is do what you do best — stalk the hashtag #ViuNoSleepNoFOMO on Instagram for more updates.

Not your typical travel show

No Sleep No FOMO isn’t your typical travel show.

Fans get to ‘travel alongside’ and engage with the hosts through Insta-live and Insta-polls. They’ll help to decide how hosts will complete certain tasks while influencing the fates of their favourite celebs.

Here’s Paul asking the fans to make what seems an obvious choice, as part of a beer-selling challenge. 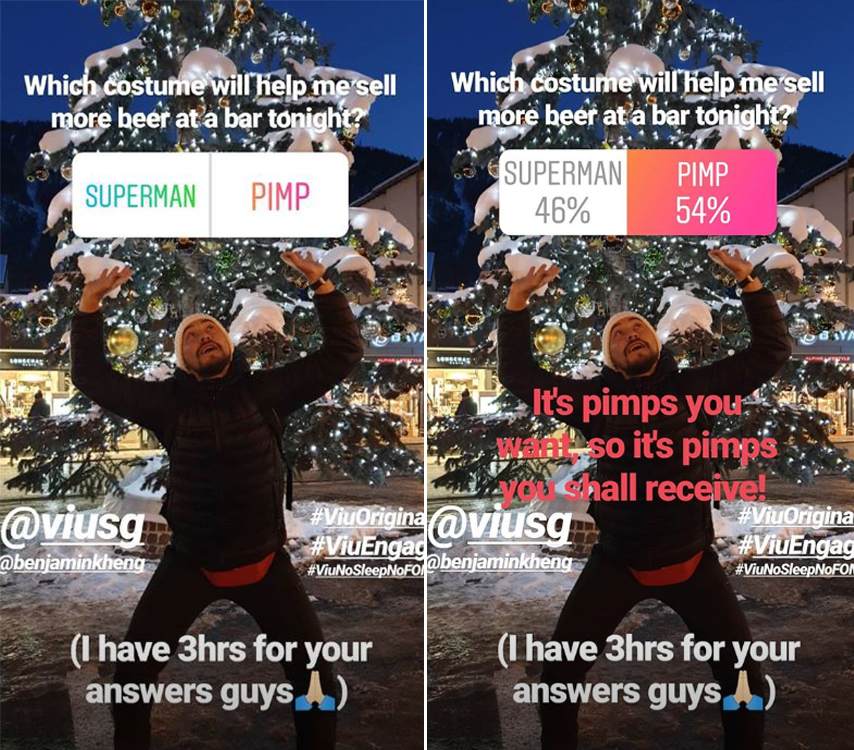 He also sought advice from his followers while he was in Korea pitting himself against Nat Ho. We think he’d look fabulous in both a male or female hanbok. 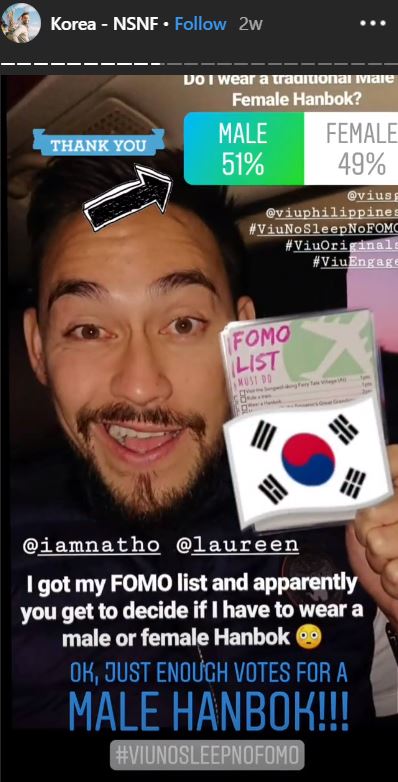 Of course, what’s the fun if there’s no carrot to chase? The winner – the one who completes more challenges – gets rewarded with a personalised local souvenir. The perfect way to immortalise the experience.

The loser on the other hand, will be punished. But not just in some trivial way. The winner gains full rights to ‘sabo’ the loser by determining his forfeit.

We feel FOMO everytime we scroll through our Instagram feed and gawk at pictures of our high-SES friends traversing the globe on wild adventures.

Daryl’s temporary fix of FOMO-shopping himself onto Ben Kheng’s pictures may be a clever solution. But catching No Sleep No FOMO come early 2019, will be a great way to watch your next travel adventure unfold before you.

You’ll even get to copy their itinerary jam-packed with crazy escapades as Paul and his guests go all out and spend 60 hours without sleep. But for all the fun and adventures they’ll manage to squeeze into that time, it’s probably worth it.

This post is brought to you in collaboration with Viu.