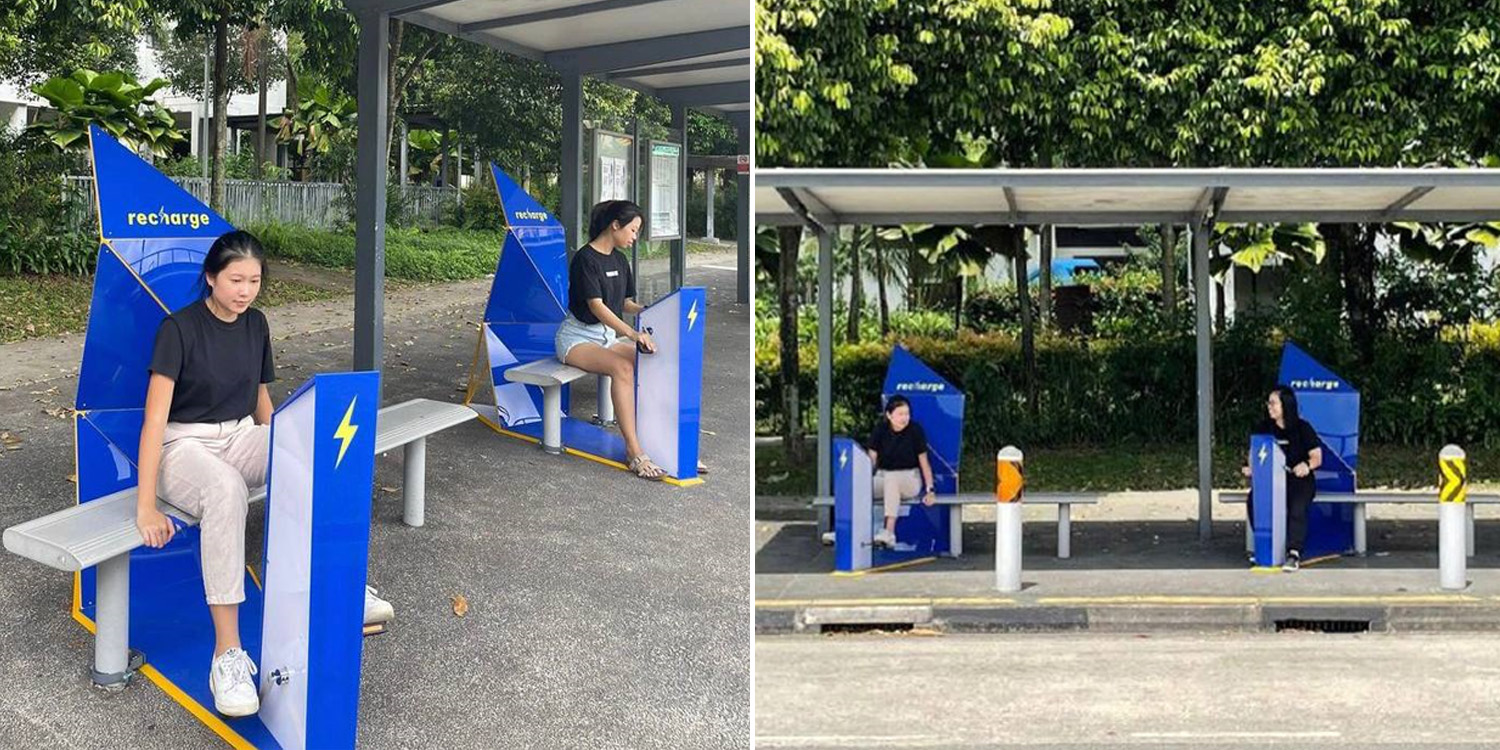 The project will run for two weeks until 5 Dec.

Most of us are familiar with the health benefits associated with exercise, but not everyone might be able to set time aside for the occasional run or gym session.

Hoping to address this issue, a group of students from Singapore University for Technology and Design (SUTD) came up with an innovative way for Singaporeans to exercise.

From 21 Nov to 5 Dec, a makeshift ‘gym’ has been set up at a bus stop in Boon Lay, allowing commuters to exercise and charge their phone while waiting for the bus to arrive.

Those who manage to clock 150 minutes per week will also stand to win vouchers.

In an Instagram post on Wednesday (23 Nov), Minister for National Development Desmond Lee unveiled details about the project. 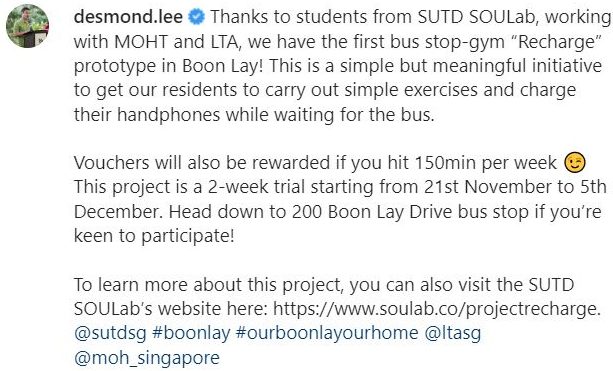 Named ‘Recharge’, the makeshift gym is located at the bus stop at 200 Boon Lay Drive. With the help of two machines, commuters can work out their arms or legs and charge their phones at the same time. Mr Lee added that the ‘gym’ is currently a prototype and will be on trial from 21 Nov to 5 Dec.

The project is a collaboration between SUTD SOULab, Land Transport Authority (LTA), and Ministry of Health Office for Healthcare Transformation (MOHT). According to SOULab’s website, the project came about after students conducted engagement sessions with Boon Lay residents. 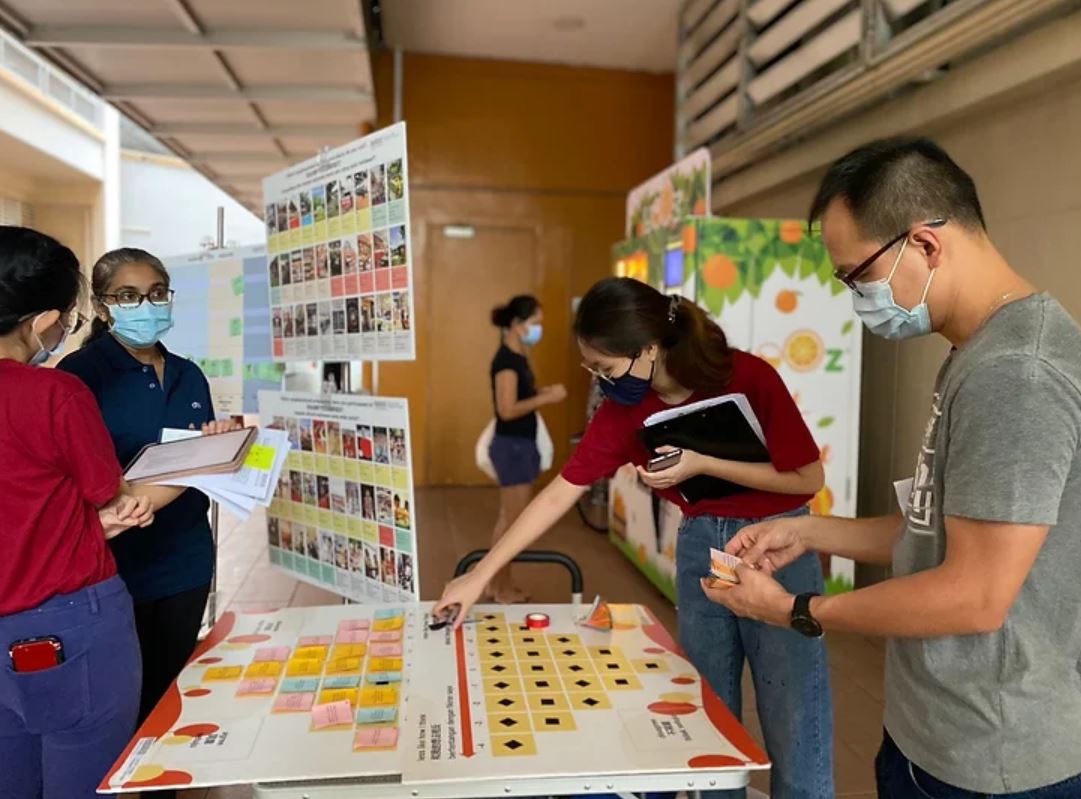 This was done to understand their perception of physical activity, healthy eating, and rest.

They then developed 16 recommendations, of which ‘Recharged’ emerged top.

Described as a “fun exercise game”, it incorporates simple fitness stations for citizens to recharge their bodies and phones while waiting for the bus. 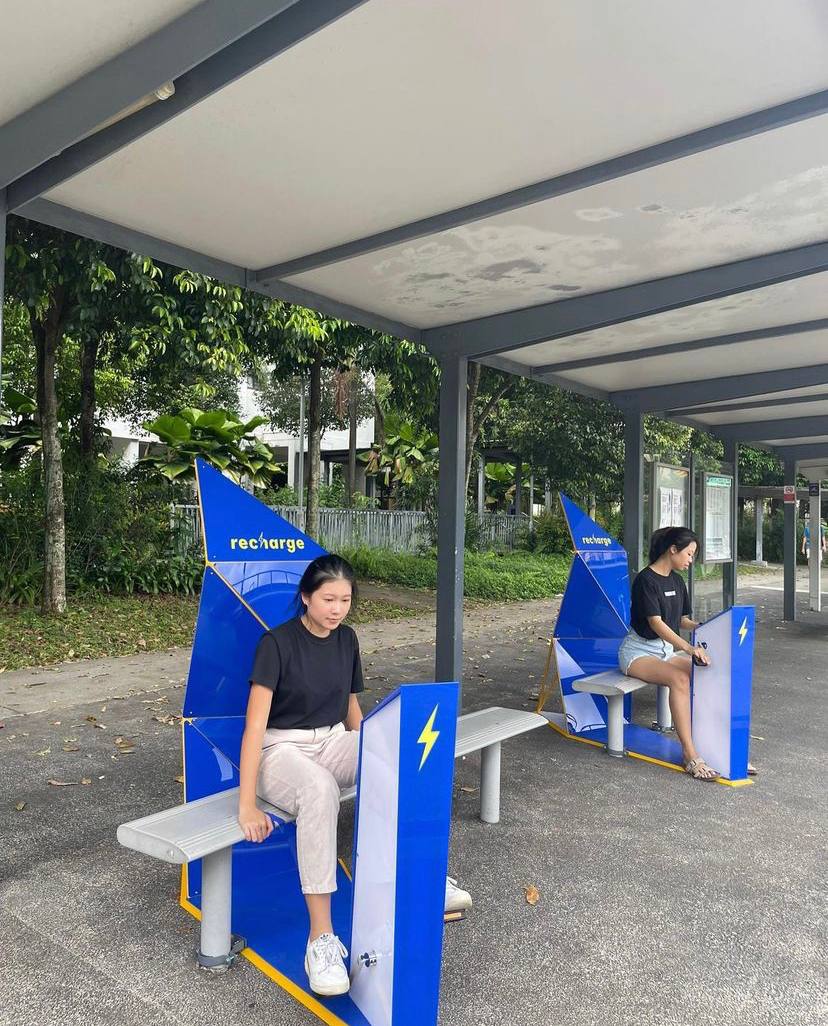 Selected users will receive a Bluetooth card to track their activity and coins accumulated. Users will also have to tap their card on the podium to start exercising.

Once the workout begins, they can exercise and charge their phones as well.

This trial is only open to Boon Lay residents between 18 and 75 years old.

They will also have to be Singapore citizens or Permanent Residents, and not have any physical disabilities that impair their movement, sight or hearing.

Those who successfully clock 150 minutes of exercise per week will also be rewarded in the form of vouchers, according to Mr Lee.

More information on the project is available at the following link.

Kudos to SUTD students for coming up with such an innovative way to help Singaporeans maintain a healthy lifestyle.

Hopefully, this will make exercise more accessible to members of the public and that similar projects will be implemented at other locations across Singapore.