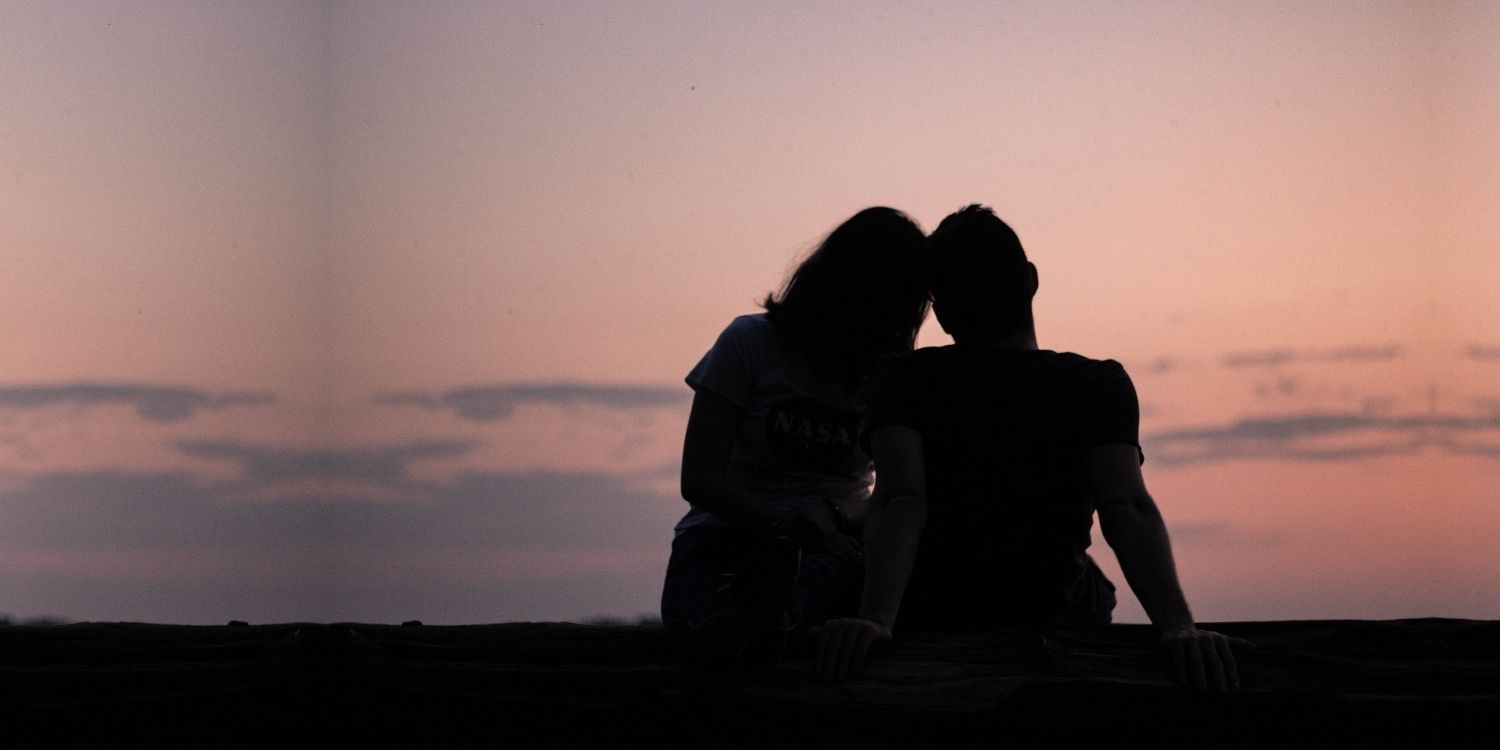 Things you wouldn't know unless you go through them on your own.

My boyfriend’s going to jail.

For the longest time, Kathleen couldn’t bring herself to utter these words out loud. If she did, it would mean her worst nightmare was coming true.

But being optimistic – or in denial, some would say – could only keep her and Brandon going for so long.

And on that fateful day, sometime in April, she watched the man she loved being escorted out of the courthouse and into a vehicle that would ferry him to his’ home’ for the next three weeks — Changi Prison.

There was little time for proper goodbyes. Already separated by the cold glass doors of the State Courts before his incarceration, they bade each other farewell – for now – by mouthing “I love you”.

The court was adjourned. And after moving around in a daze, Kathleen found herself standing in front of Brandon’s HDB unit alone with tear-stained cheeks.

It’s just three weeks. I can get through this.

Picking up the pieces after months

Almost two months later, Kathleen, in her 20s, still has to fight hard to stave off an emotional breakdown when she recalls those tumultuous days.

It’s been a while since she’d picked up Brandon at Changi Prison Complex after his sentence was over. 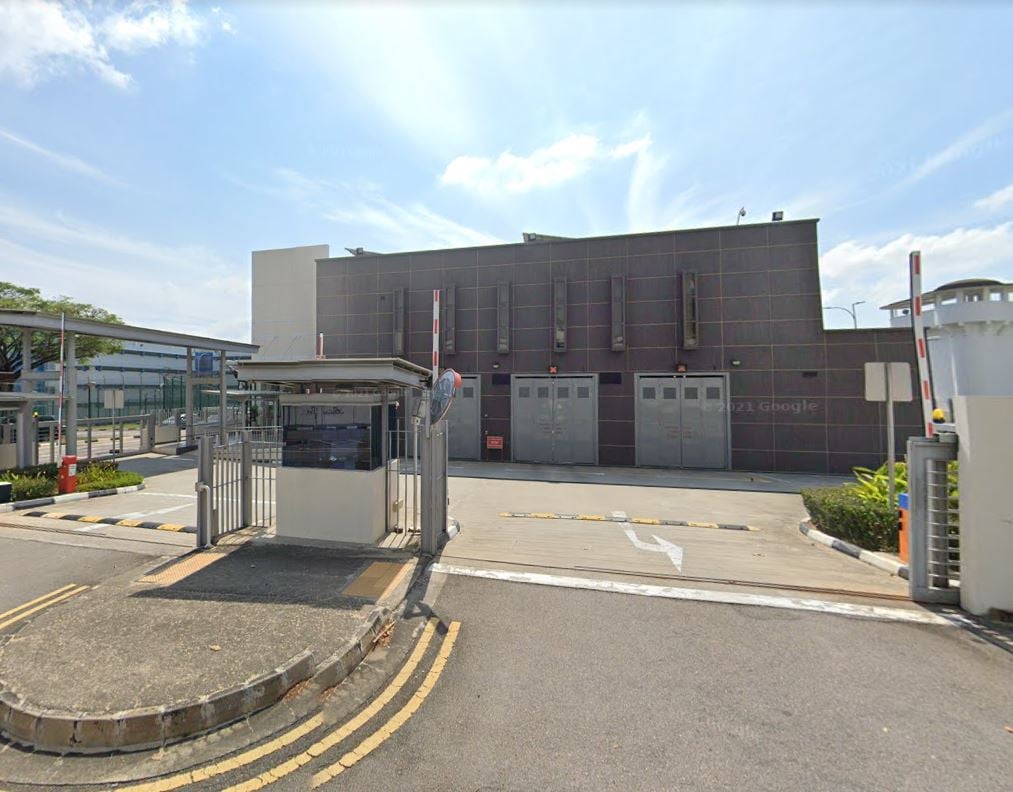 But, as she sits in a Woodlands coffee shop to recount her experience with MS News, fresh tears pour as if it just happened yesterday.

“Before Brandon, I didn’t know anyone who had gone to prison,” she admits. “If I did, perhaps the process would have been much easier.”

While she did find prisonlife.sg and other online FAQs, most of them were tailored to inmates with longer sentences. She couldn’t find a summary of what loved ones could expect from the procedures. 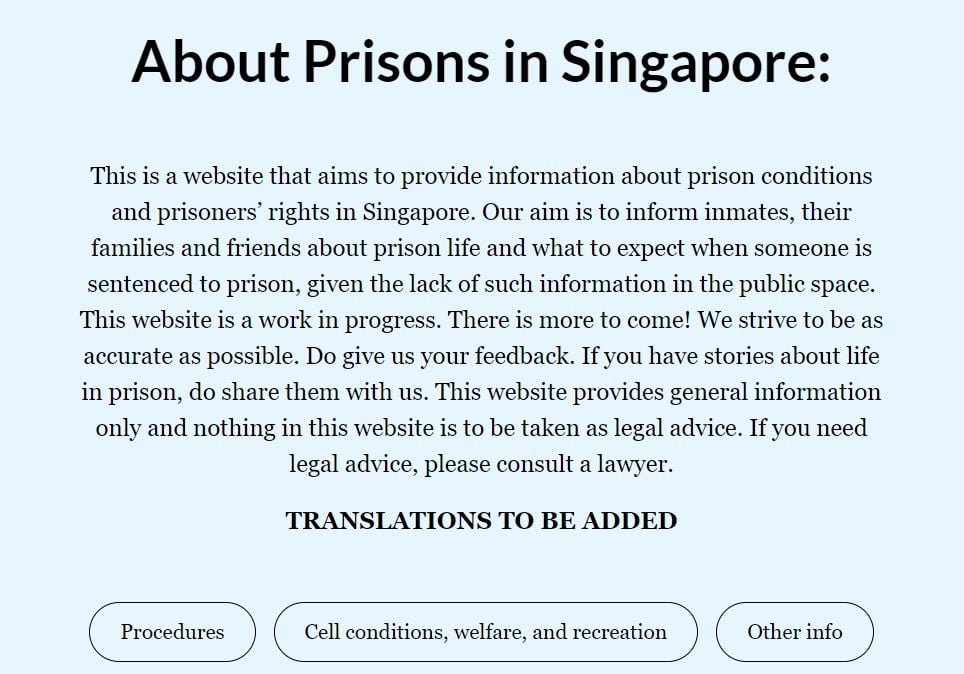 Kathleen recalls feeling a lot of confusion because she was highly unprepared. She also felt for Brandon’s mum, who was alone and didn’t know who to call. Whenever Kathleen went over to visit, the septuagenarian would ask her why they had no updates from Brandon.

“A lot of information wasn’t readily available. We could only wait, wait, and wait until someone from the prison contacted us,” Kathleen tries putting her exasperation into words.

How long to wait for an inmate number

Time seemed to pass by excruciatingly slowly when Brandon was in prison. Kathleen notes that this was exacerbated by the delay in relaying information to inmates’ loved ones.

She was left in the dark for about a week, with a tragic dearth of details found online. “I needed Brandon’s inmate number, but there was nothing from them (the prison) for days.”

“Every time the phone rang, I hoped it was someone from the prison, or better yet, Brandon himself. When someone finally called to tell me his inmate number, it had been seven days,” she sighs.

Kathleen explains that the inmate number was precious information because it was her only key to connecting with Brandon when he was behind bars.

You can’t even ask the prison authorities to check using their NRIC. It had to be the inmate number. Everything was a waiting game until I got Brandon’s.

“I wish I had known that it would take them seven days. It would’ve saved me so much time and worry during the first week,” she relates.

How to send a prison e-letter

As seen in CNA’s documentary Maximum Security, inmates have dedicated tablets, which they can use to send and receive e-letters every month. It’s pretty much the prison version of e-mails. 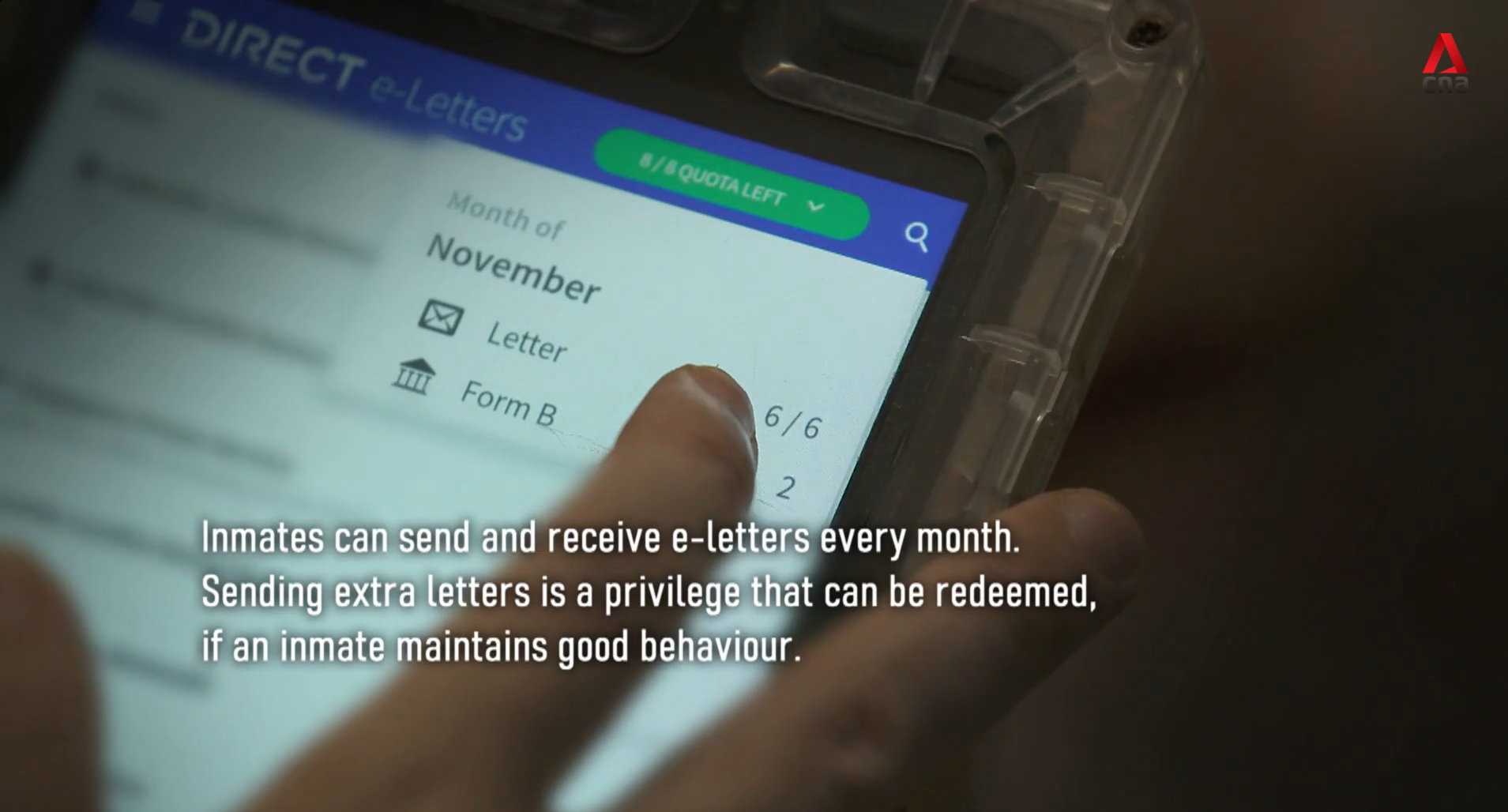 But kickstarting the e-letters arrangement was another source of confusion for Kathleen.

After receiving Brandon’s inmate number, she thought she could finally open the elusive one-way portal to her boyfriend, to get him to hear her words, thoughts, and feelings.

When filling up the form, Kathleen remembers being asked to state her relationship with Brandon. She found the ‘girlfriend’ option — though she was quaking slightly, thinking she wouldn’t as it was at the bottom.

“And that’s it. I submitted a request. It was pending.” But Kathleen wasn’t about to sit around and wait. Once again, she actively sought answers.

“Inmates apparently can’t be the first to send e-letters. I found this out much later.”

Growing desperate, Kathleen needed to hatch a plan. So she found a way to request to book a slot for visitations, thinking it was a better solution than writing e-letters.

“But because I am Brandon’s girlfriend, I’m only considered a friend. And they said it may take up to 21 days to process this request,” Kathleen holds back her laughter as she remembers the incredulous moment — the processing time was as long as Brandon’s jail term.

So I can’t even talk to him, can’t even write to him, or visit him. How am I supposed to communicate with him throughout?

How to procure a tablet in Changi Prison

At a loss for answers at that time and not knowing where to turn to, Kathleen felt like she was trapped in complete darkness for a while.

Until one fine day, she decided to dial up the customer service hotline of Singapore Prison Service’s e-Letters System.

Her saviour came in the unlikely form of a comforting voice on the other side of the phone.

The customer service officer asked Kathleen when Brandon had entered prison. She gave him the date, adding that it was going to be his second week now.

“And he was like, ‘Oh, if he (Brandon) went in last week, he wouldn’t have his tablet.’ I was like, ‘What?!’ Apparently Brandon was to undergo a 10-day quarantine and would only get his tablet on the 11th day,” she said.

In other words, all of Kathleen’s worries were for nought. Brandon was fine. Brandon didn’t forget about her. Nothing happened to Brandon. He just wasn’t eligible for his tablet yet because of Covid-19 quarantine protocols.

Police sitcom-worthy moment notwithstanding, Kathleen was still very much living in a drama on her own. She was still reeling from the fact that none of the above had been communicated to her.

After spending a good deal of time processing this, Kathleen remembered to ask her most crucial question, “When is he (Brandon) coming out? I need to know this.”

But alas, she was directed to call the prison hotline. Some 30 minutes later, another person called from the prison service, telling her that the prison authorities would contact her soon with the information she needed.

How to talk to someone behind bars

Handling communication with the prison service was only one facet of Kathleen’s experience. Another significant part was managing her own emotions due to the sudden lack of interaction between her and Brandon.

Some nights, she would quietly cry herself to sleep, especially when her thoughts were a little less kind.

“No one in my family knew about Brandon’s situation. Not even my best friends. It was Brandon’s request, and I did my best to respect his privacy,” she confesses.

As the couple did not want to arouse suspicion, they devised a ‘social media plan’, which involved Kathleen holding onto his phone and posting things occasionally on his socials as if life was fine and dandy. 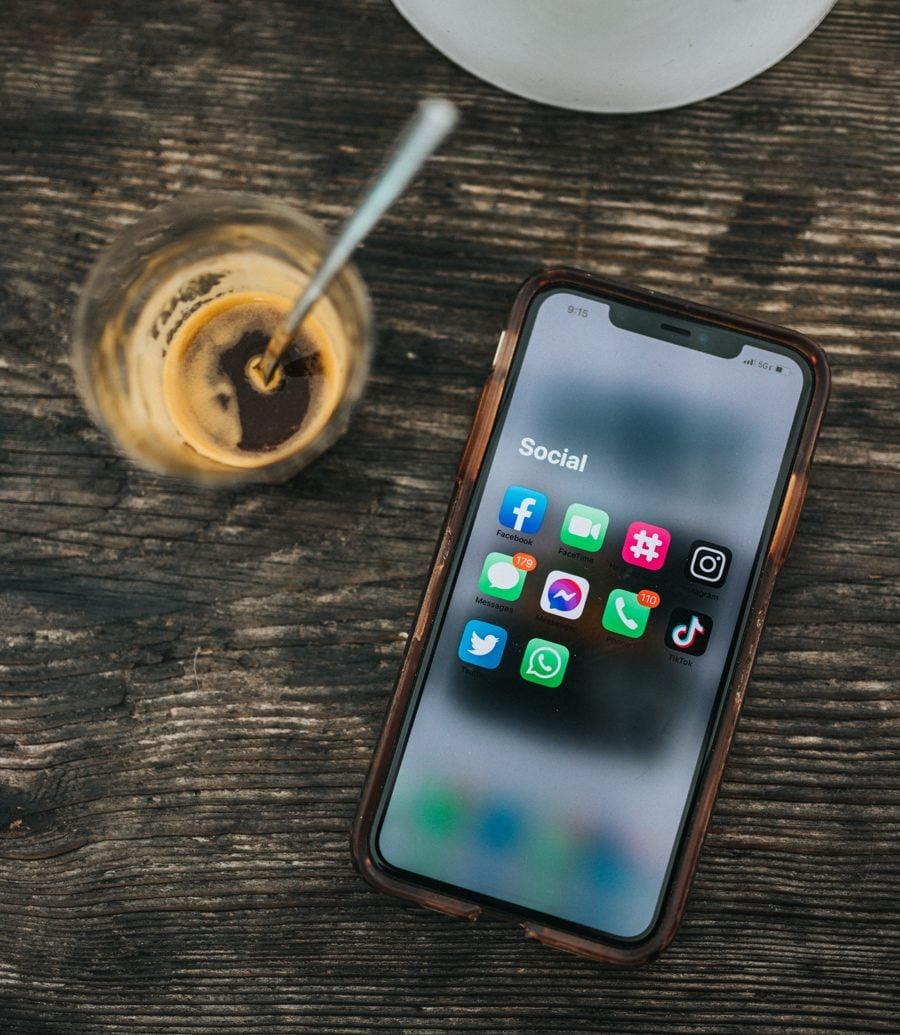 Despite the rosy facade painted online, cracks began to form, especially when the lights went out and loneliness became her companion.

We were so used to updating each other about our lives. Who was I going to talk to?

Kathleen’s eyes are brimming with tears at this point of the conversation.

She knew she needed to stay strong. And she was still determined to tell Brandon about her day. She found an empty journal in her drawer and started writing.

She broke down each time she wrote an entry, so she tried to write as quickly as possible. Knowing that Brandon would be able to read these impassioned scrawlings kept her determined to chronicle her days until she could have him in her arms again.

How to cope with hurtful comments on social media

Then, there was the not-so-rosy side of the Internet: media coverage of Brandon’s case. It wasn’t exactly a high-profile one, but getting jailed for assault – even a mild one – was enough to set tongues wagging and fingers furiously typing.

Keyboard warriors were ruthless. Using words as their weapons, Kathleen says she witnessed a barrage of nasty remarks raining down in comment sections — as if Brandon had hurt them personally. As if they really knew Brandon.

So many horrible things were being said. When the media outlets picked up the case, it was so hard for me.

“As wounded as I was on Brandon’s behalf, I was more concerned about him getting tagged in the comments by friends who recognised his full name and age in the report, then our entire plan would be over,” she recounts.

Kathleen diligently maintained the veneer of innocent, intermittent postings on Brandon’s accounts. She thought that if there were regular updates on his feed, no one would suspect anything.

“Brandon has always been my rock. For him not to be there, for such horrible things to be said about him by strangers, it was hard, so hard,” she manages a sob mid-interview.

Eventually, Kathleen realised the only way out of this swirling vortex was to stop obsessing over social media and drown herself in work as a distraction.

On one uneventful Friday, when she was toiling away at her work desk, glorious news – in Kathleen’s words – awaited her. Someone called to inform her that Brandon would be out the next day, on a Saturday.

And the rest was history.

How to help others

After Brandon’s jail sentence has been completed, the worst seems to be over now for the couple. It could’ve been more difficult, but Kathleen hopes that Brandon has truly learnt his lesson.

In retrospect, she was still grateful for everything that they’d been through. She now has the chance to share her experience in the hope of letting others in similar situations know they’re not alone.

At least, they now have a more tangible idea of what to expect from prison procedures.

Watching a loved one going to prison and choosing to stand by them despite life’s adversities is tough yet admirable.

We wish Kathleen and Brandon all the best.

EDITOR’S NOTE: Names have been changed to protect the couple’s privacy.

Kathleen’s experience with Changi Prison procedures may differ from others. You can check out Singapore Prison Services’ website here for more information.

Featured image adapted from Unsplash for illustration purposes only.