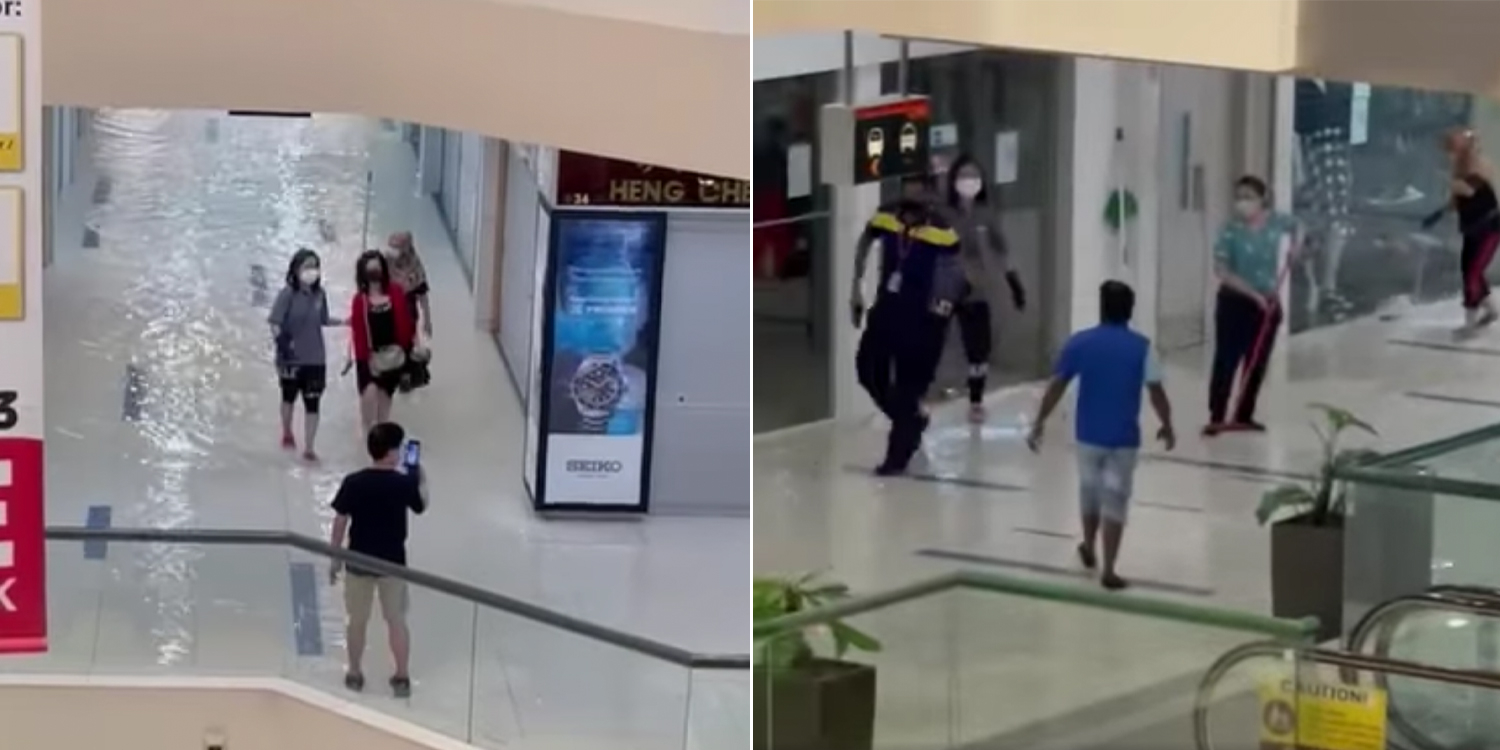 Water was seen dripping from ceilings and escalators.

Singapore residents woke to thundery showers on Tuesday (24 Aug) morning that caused flash floods in several areas around our island.

The floods left many road users stuck in traffic but the staff at Bukit Timah Plaza may have had it worse.

In photos and videos circulating on social media, some levels of the mall appeared flooded, with water dripping from the ceilings and escalators. On Tuesday (24 Aug) at about 10.30am, Bukit Timah Plaza started flooding when water poured in from a B1 entrance along 1 Jalan Anak Bukit Road.

The water flowed from a pedestrian walkway and at one point reached about 15cm high, reported Channel NewsAsia (CNA).

According to a Facebook post by Ms Faridah, an employee there, this led to spillover to B2.

In photos and videos, water can be seen dripping from ceilings and escalators in the mall.

Shoppers were also seen wading through large pools of water.

The flood only began to subside at about 11.30am.

Elevators and some escalators at B1 and B2 were reportedly temporarily suspended as a safety precaution.

During the ponding situation, cleaners and technicians worked together to drain, clean, and repair escalators between B1 and B2. 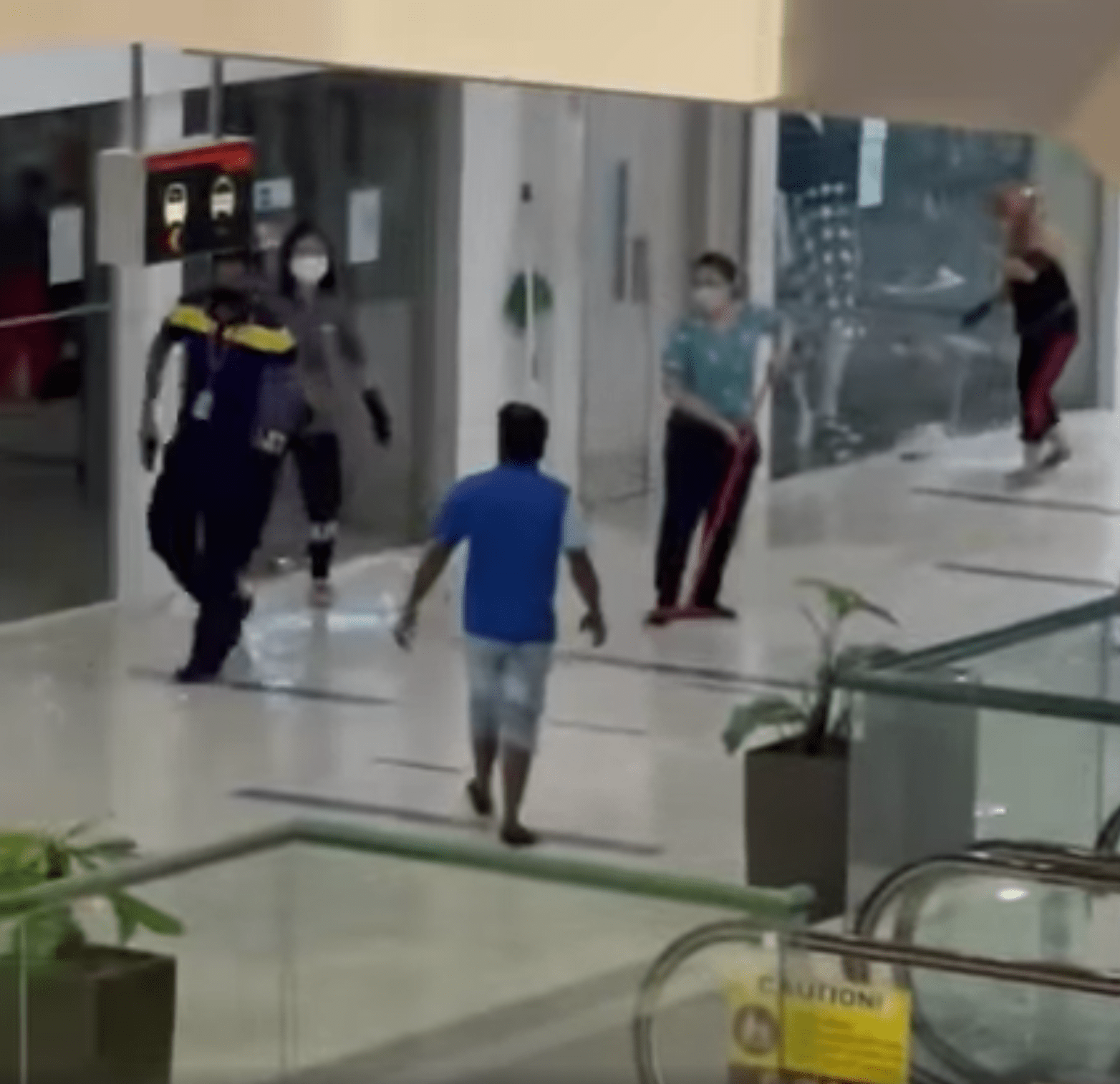 At around 12.30pm, store owners were still mopping their storefronts and using blower machines to dry the floor.

Many stores, including a clothing outlet at B1, suffered damages to their floors and merchandise..

Speaking to CNA, the store owner said when he arrived at 12pm, the water had swept apparel all over his store.

He added that the vinyl flooring in his store would probably also need replacing as water was still leaking from cracks in the floor.

And the damage was not just isolated to the stores. Below an escalator between B1 and B2, water started pouring down from a part of the ceiling.

Following that, at about 10.30am, a portion of the false ceiling collapsed.

The area was later cordoned off and water continued dripping from above.

First time mall flooded in the past 10 years

At 1pm, a Bukit Timah Plaza spokesperson said they were still trying to drain water out of the mall but business is as usual.

According to Shin Min Daily News, he apologised for the inconvenience caused to the owners of the affected units.

This was apparently the first time such a flooding incident had occurred there in the past 10 years.

Earlier this morning, the national water agency PUB had issued a flood risk warning at several locations around Singapore. 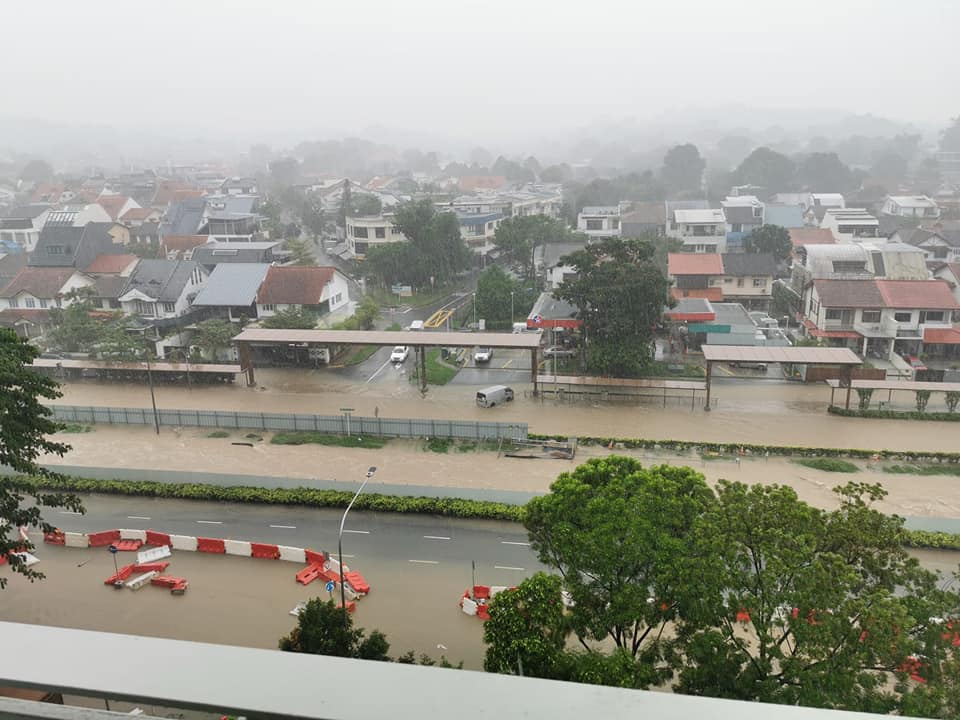 The agency also warned that water levels in drains and canals along Upper Bukit Timah Road had reached about 90%.

To see images and videos of shoppers wading around in water at a mall is certainly unprecedented in Singapore.

With the wet weather we have been experiencing lately, there have also been more incidents of flash floods.

And as the heavy rainfall is expected to persist in the days to come, it might be wise for us to stay indoors and only go out if we absolutely have to.