The Malaysian driver appeared to push the Singaporean driver.

When it comes to taking a quick day trip, heading to Johor Bahru (JB) is one of the best options for Singaporeans.

However, being stuck in bumper-to-bumper traffic takes a toll on drivers and things can get heated along the way.

This happened recently when a Singapore-registered car allegedly cut in front of a Malaysian one at the JB checkpoint.

The Malaysian driver then confronted the Singaporean driver, even getting physical at one point.

He had to be held back by his female companion, who tried her best to defuse the situation.

Footage of the incident, which happened on Wednesday (17 Aug) at 4.34pm, shows that there were queues at the JB customs counters as the Singaporean car, a grey Volkswagen, approached.

The driver continued to move past the Malaysian car, a white Honda, which was in the right lane, presumably waiting to enter a queue.

As the Singaporean car passed the Malaysian one, the driver of the latter seemed to be caught off guard and immediately moved forward as well.

Unfazed, the Volkswagen turned into one of the counters and the Honda came to a stop beside it.

With their car windows down, the occupants of both vehicles then appeared to start shouting at one another. 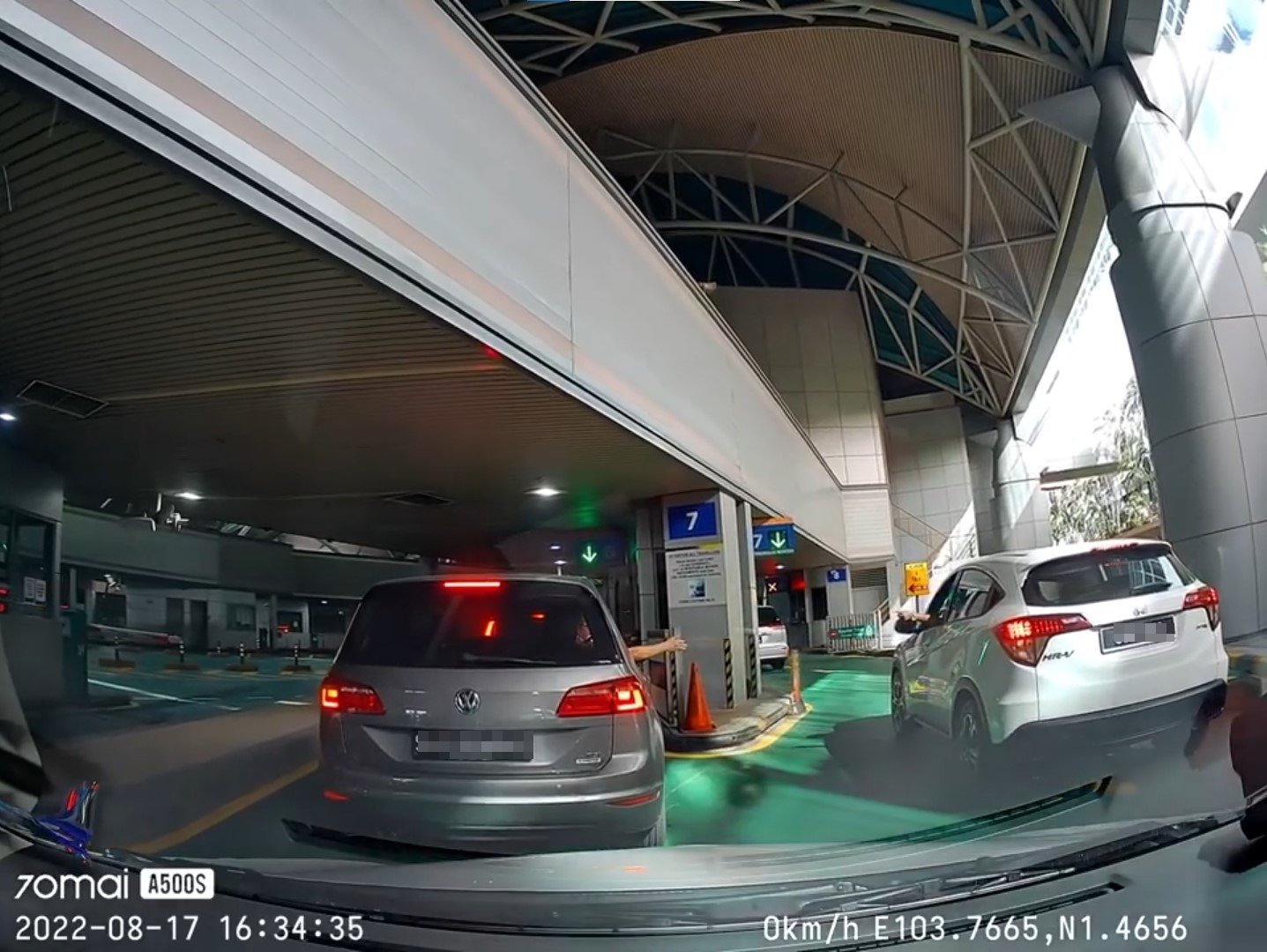 Soon, they were making furious gestures out of their windows.

After a short while, the Honda driver exited his car and approached the Volkswagen. He stood by the vehicle, exchanging words with the driver.

Things between them did not seem to calm down even as the Honda driver’s female passenger tried to placate things.

She pushed the Malaysian man away from the Volkswagen, but the Singaporean driver could still be seen gesturing out of his window.

The Honda driver kept lunging forward while confronting the man in the Volkswagen but was repeatedly held back by his companion. As things got increasingly heated, the Malaysian man managed to break free from the woman’s grasp. He reached into the Volkswagen and appeared to push the driver.

The woman then pushed him toward their car, holding him back in a tight embrace.

Both drivers kept on gesturing wildly at one another before the Singaporean driver drove up to the counter.

The incident then seemed to come to an end as the Malaysian man and woman returned to their vehicle.

No need to pick a fight

The circumstances of the incident remain unclear and it’s hard to say if the Volkswagen driver meant to cut in front of the Honda.

Regardless, there was no need for the drivers to pick a fight with one another.

After all, all it usually takes is a simple conversation or an apology to clear the air and resolve matters amicably.