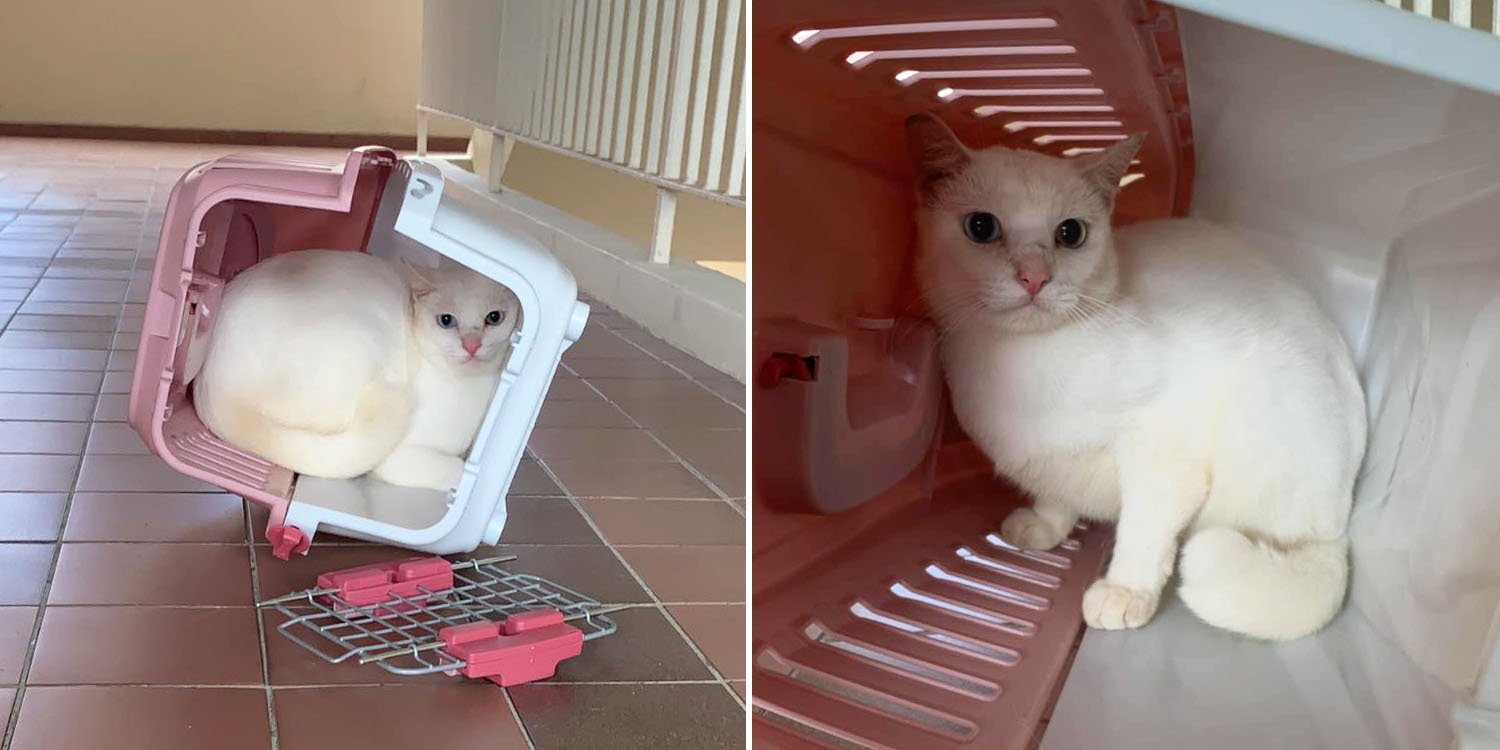 The cat was so scared that it couldn't leave the carrier.

Pets are loving and fun, but when it comes time to shoulder responsibility, it’s unfortunate that not every owner is able to do so.

On Saturday (1 May), a woman was at a HDB lift lobby when she found a cat apparently abandoned in a broken carrier. 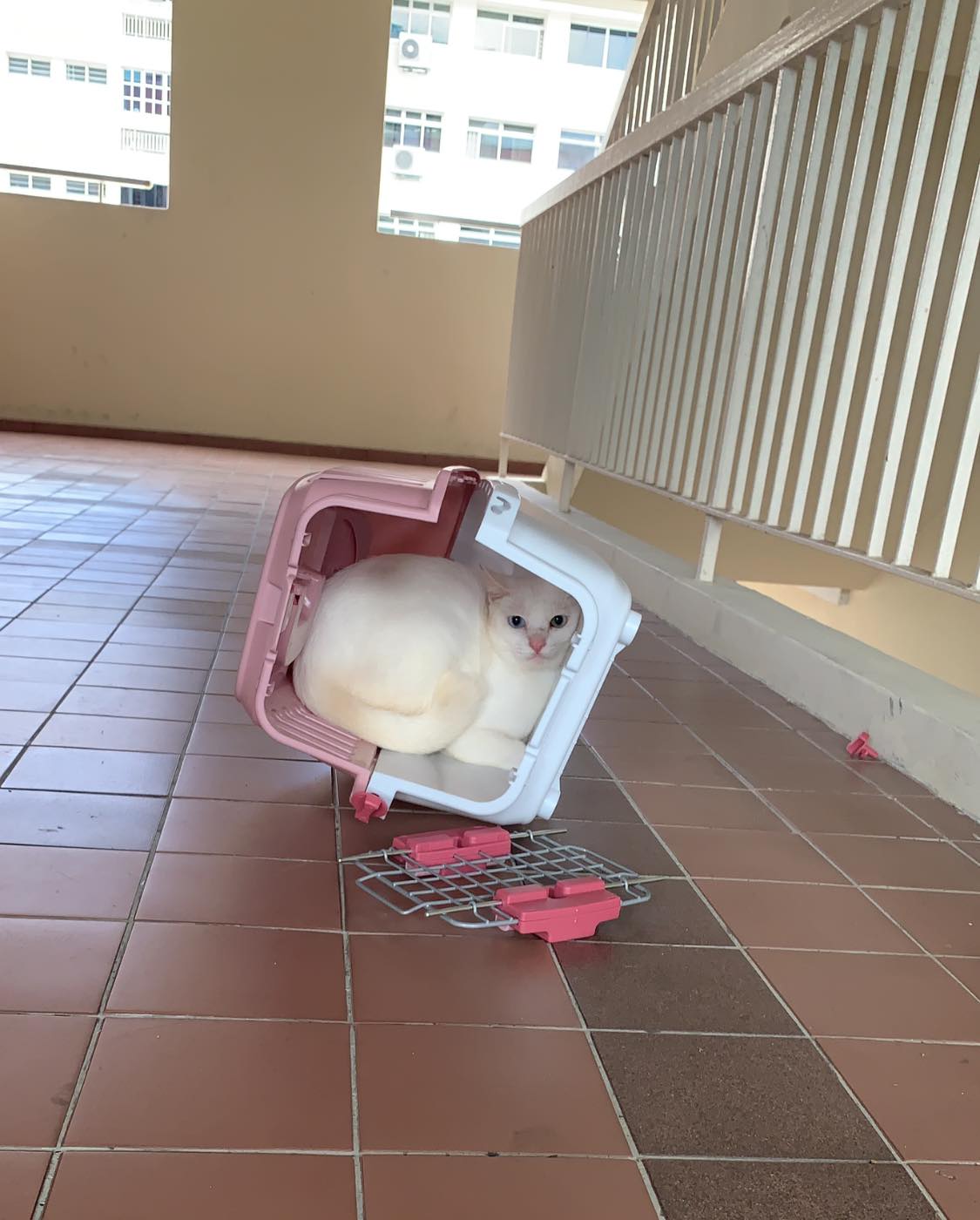 The carrier appeared to have been thrown onto the ground with the poor cat in it.

She later took to Facebook to share about the incident, urging members of the public to be responsible for their pets. 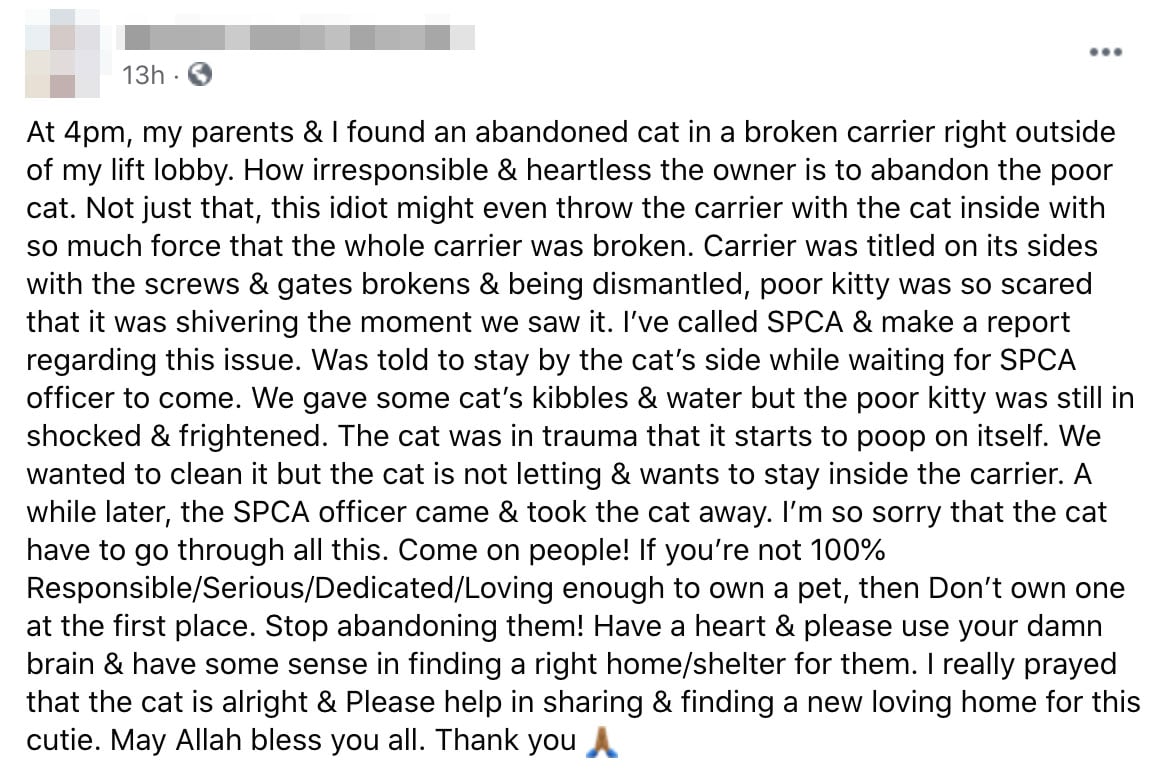 On Saturday (1 May) at around 4pm, the woman said she was walking with her parents when they came across an abandoned cat in a broken carrier at the HDB lift lobby. 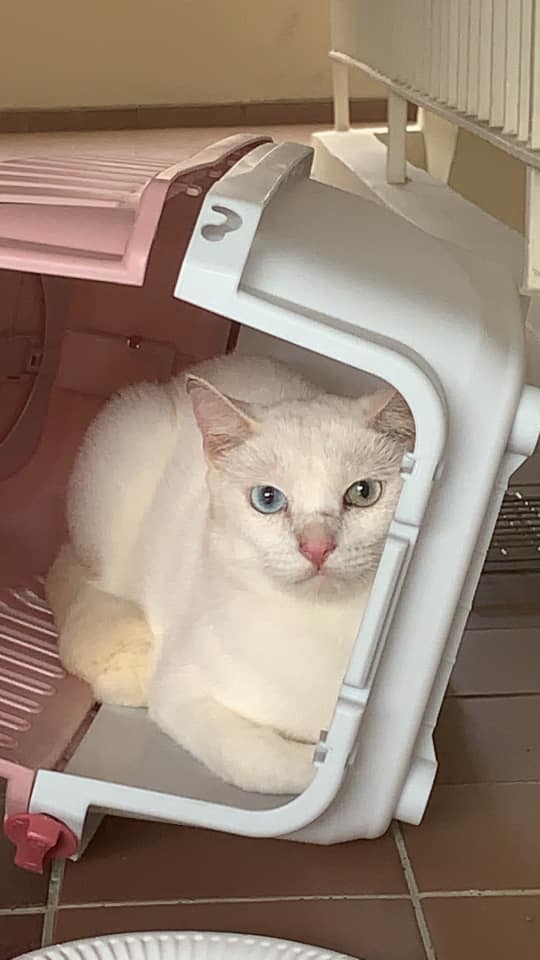 It looked as if the carrier, with the cat in it, was thrown onto the ground, breaking on impact.

In fact, the impact seemed to have been hard enough for the carrier’s mesh door to be broken off. 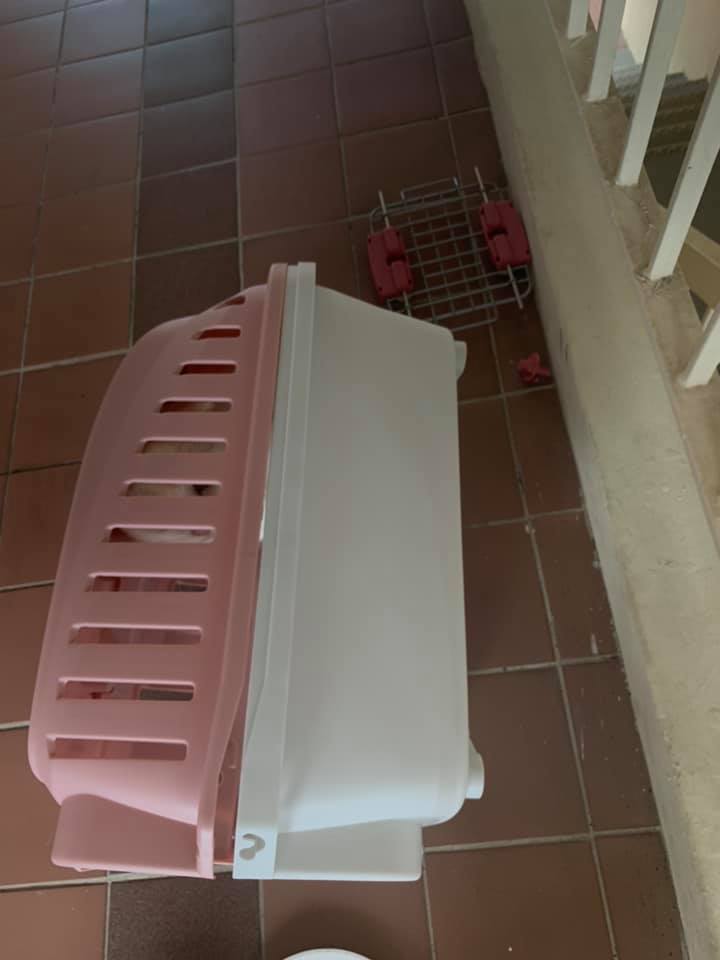 The carrier, which was tilted on its side, had also opened up along the sides.

The poor cat was so afraid it was shivering as it cowered further into the carrier.

Worse, the cat appeared to have started pooping in fear. 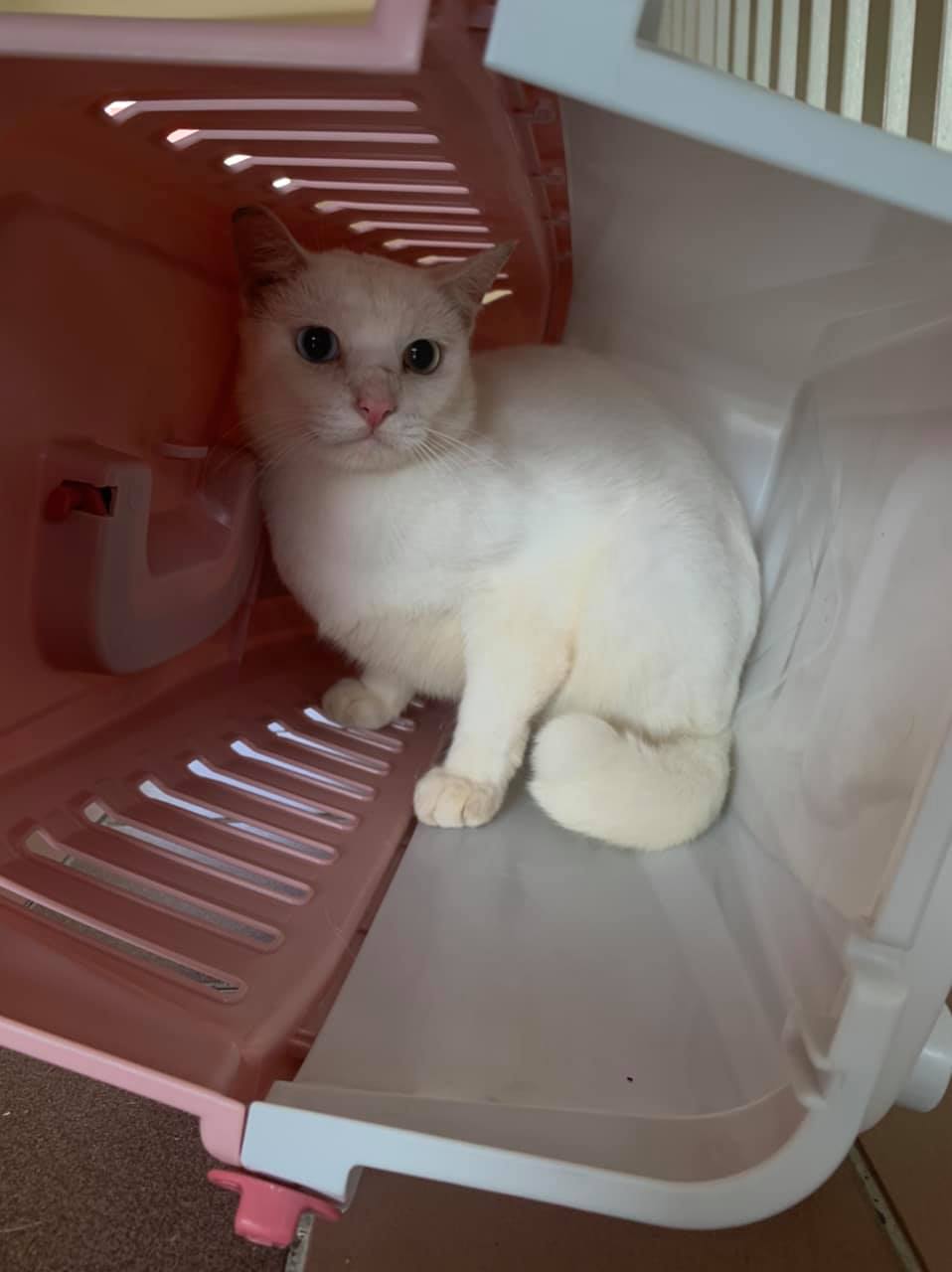 Hoping to render it some help, the woman called the Society for the Prevention of Cruelty to Animals (SPCA) and made a report.

SPCA instructed her to stay with the cat while they deployed their staff to the scene.

She and her parents then tried to offer the cat some food and water.

However, the cat was too scared and in shock to eat. It even pooped in the carrier out of fear. 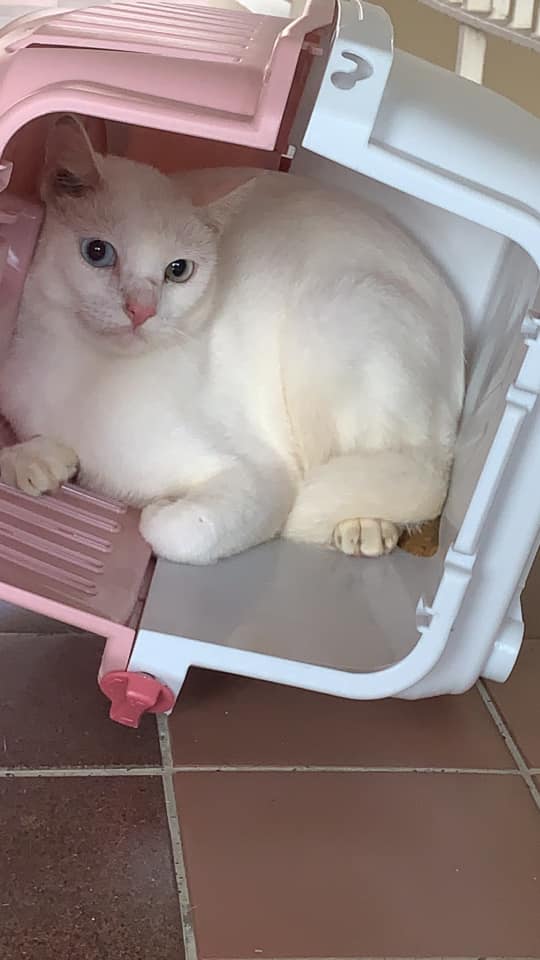 When they tried to clean it up, the cat refused, only staying put in the carrier.

SPCA personnel later arrived at the scene and took the cat away.

Concluding her Facebook post, the woman shared that she felt sorry for the cat that was put through all of this.

Addressing the public, she warns prospective pet owners that if they do not feel 100% confident of being responsible, dedicated and loving owners, they should not get a pet.

She urged people to “have a heart” and stop abandoning pets.

At the very least, she felt owners should find the right home or shelter for their pets.

Do not resort to abandoning pets

It is saddening to see a cat be literally tossed onto the street to fend for itself.

Unfortunately, this is only one of many pet abandonment cases.

But these creatures deserve to have a proper home, even if an owner can’t provide one.

If pet owners have reasons they need to give up their pet, they should be responsible and ensure they are re-homed into a loving and caring environment and not resort to abandoning them.