The stall owner insists the cockroach didn't come from their kitchen.

Man Finds Cockroach In Porridge From Tampines Stall On 23 Jan

There are so many ingredients that could make a bowl of porridge taste great, but a cockroach certainly isn’t one of them. Unfortunately for one man, he allegedly found this surprise ingredient in the porridge he ordered from a stall in Tampines on Sunday (23 Jan). 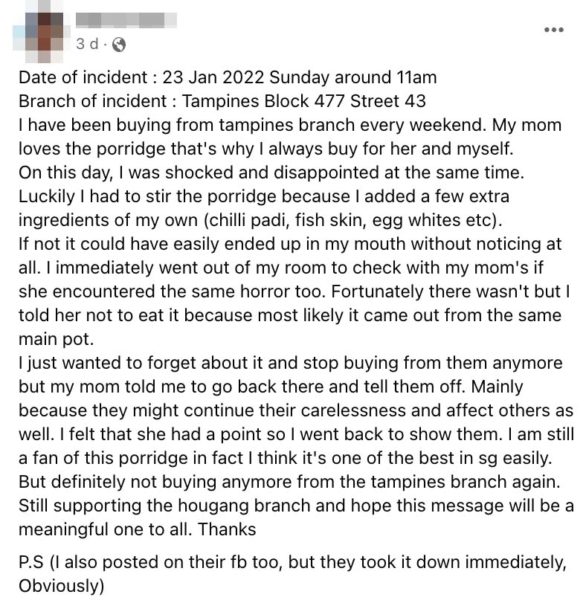 Sin Heng Kee Porridge’s Tampines outlet has responded to his post, saying that it is unlikely to be their fault due to their thorough cooking process and hygiene protocols.

The Singapore Food Agency (SFA) is currently investigating this incident.

According to a Facebook post in the Complaint Singapore group, the customer had a close call as he only noticed the cockroach when he was stirring in the extra ingredients he added.

Had he not ordered those ingredients, he claimed that it would have been likely that he would have placed the cockroach into his mouth.

The customer expressed his disappointment in the stall which he apparently patronises every weekend for the porridge he really loves.

A Facebook user likely with links to the Tampines stall later commented on the post, apologising for the customer’s experience.

However, she also urged everyone to be fair in assessing the situation and passing judgement. 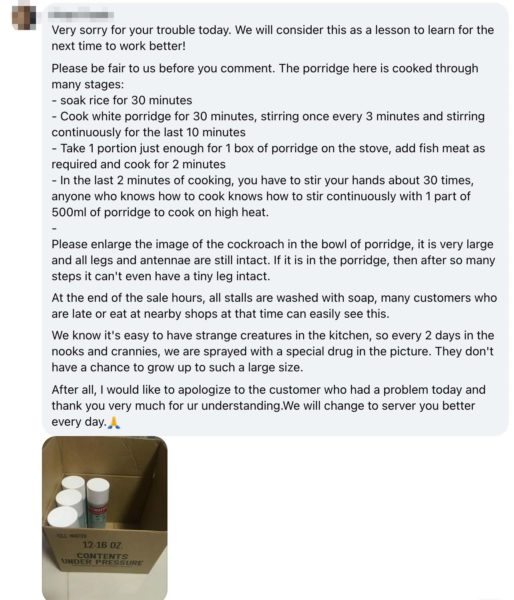 In her reply, she explained the long and elaborate process of preparing the porridge. Due to this, she believes that it is highly unlikely for the cockroach to come out whole, the way the customer found it. 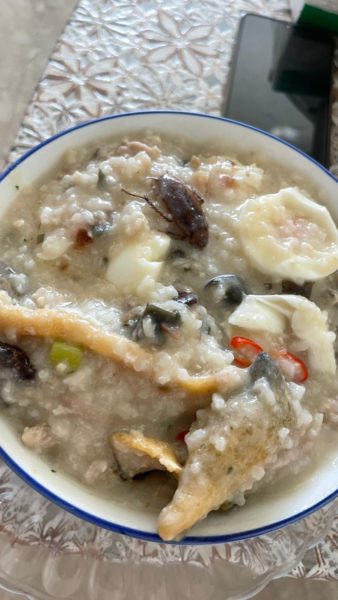 From the photo provided, it can be seen that most of the cockroach’s legs and antennae are still intact.

The netizen added that they use a special drug to kill pests at their stall every 2 weeks. Hence, she insisted that it would be impossible for a cockroach to live long enough to grow to that size in their kitchen.

Sin Heng Kee Porridge, meanwhile, commented on their Facebook page that the Tampines branch is not affiliated with their Yishun and Hougang outlets. Instead, it only shares the name because of ancestral relations.

In response to Stomp’s queries, the SFA said that they are currently investigating the matter.

They also took the opportunity to remind the public that food safety is a joint effort. While the SFA can impose and enforce regulations, food operators are expected to maintain good hygiene practices.

They also stated that they would not hesitate to punish irresponsible or negligent food handlers if they have sufficient evidence.

Food has always been a huge part of Singaporean culture.

Food safety is thus held in high regard, with F&B business owners holding a huge responsibility to uphold it.

Since this incident is under investigation, we urge everyone to avoid making speculations pending further information.