Probably one of the worst news you can receive while overseas is that your house has been broken into.

That was exactly what happened to 53-year-old Mdm Lin while she was holidaying in Japan.

In an interview with Lianhe Zaobao, her brother Mr Lin said that Mdm Lin had asked her friend to watch over her rental flat in Bendemeer while she was overseas.

Near midnight on Friday (1 Mar), he received a call from her friend saying that Mdm Lin’s front door had been “forcibly opened”.

After rushing down, he saw that the unit’s iron gate had been completely removed and the lock to the wooden door damaged by drilling.

Suspecting a burglary, Mr Lin immediately called the police and informed his sister.

When the police arrived, they swept the house for any lurking intruders before allowing Mr Lin to go in to check for missing valuables.

To both parties’ surprise, nothing was missing. This led the police to label the incident as an act of mischief. 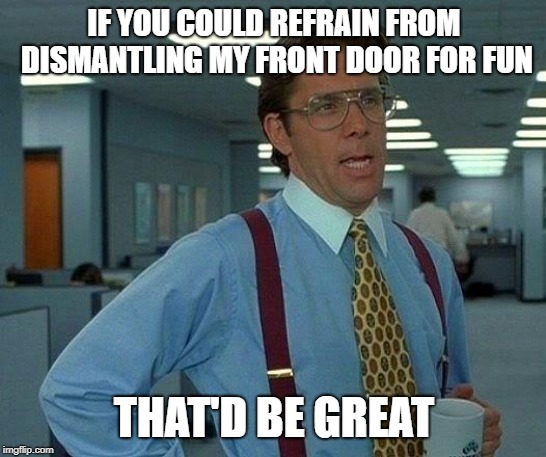 The next day, Mr Lin contacted the Housing Development Board (HDB) about the matter, and learnt that the contractor had done repairs on the wrong unit.

Instead of changing the locks for a vacant unit, number 779, the contractor changed the lock for number 799, Mdm Lin’s unit.

And since the iron gate was in the way, he dismantled it. At Mr Lin’s request, HDB sent a maintenance team down to fix the gate and the door.

That afternoon (2 Mar), Mr Lin went down to check on the repair work. To his bafflement, he saw the workers drilling holes at the front of the iron gate, intending to screw them into the wall.

Mr Lin thought that that would be ridiculous, since anyone could easily unscrew the iron gate and take it home.

Instead, he asked the repairmen to install the screws inside, such that they would not be accessible when the gate is closed.

Don’t panic if your door is missing

If there’s any lesson to take away from this, it’s that you should always remain calm when you find your front door completely dismantled. Most probably, it was a repairman who got the wrong address.

Just kidding. You should call the police in case there really is a burglary.