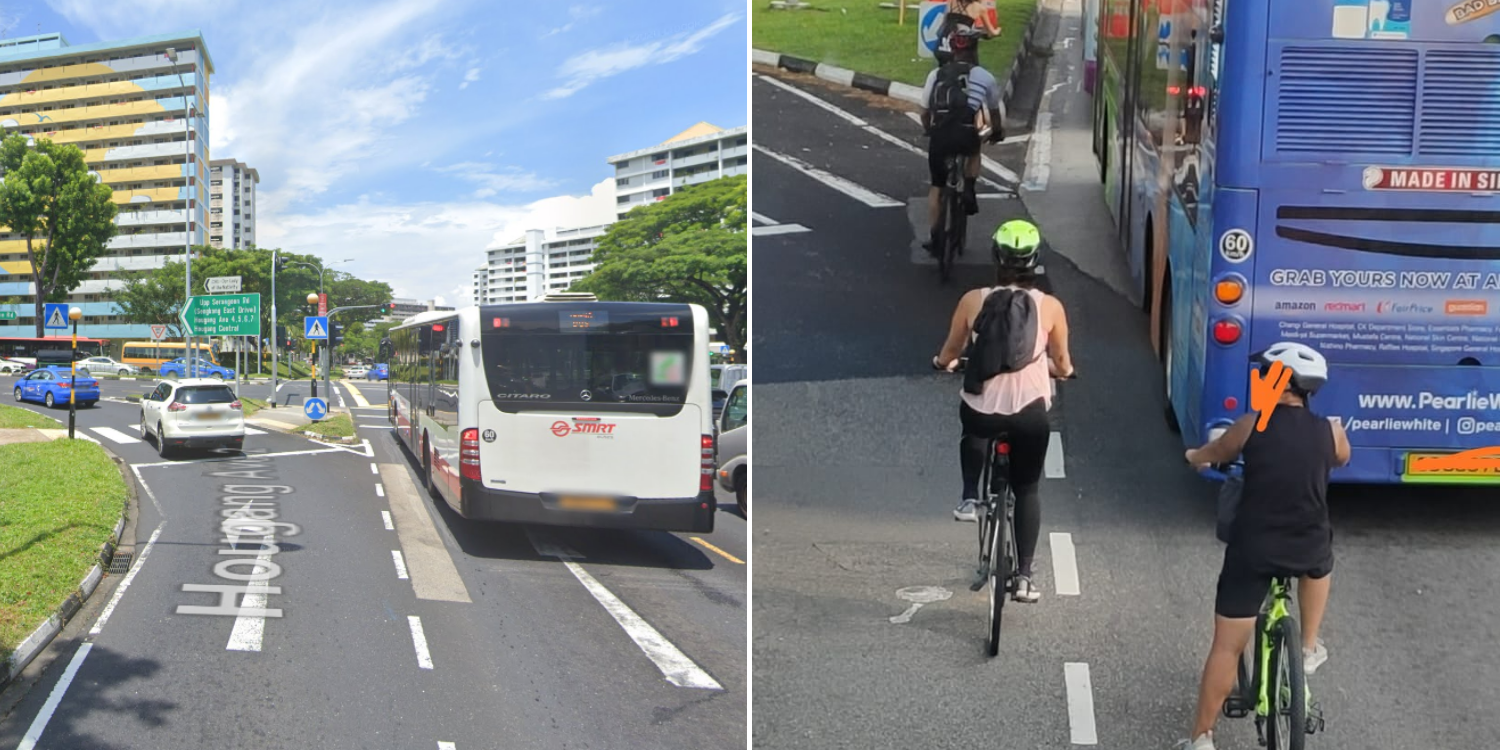 While cycling on the road is permissible with helmets, riding a bicycle alongside heavy traffic poses considerable danger.

Having sighted 4 cyclists on a busy road frequented by cement trailers and buses, a netizen took to Facebook to caution against it.

His post seems to have struck a chord with many, as it went viral with over 2,600 shares in a day.

We summarise the sentiments of the OP, Mr Nooraidil, below.

On Saturday (5 Jun), Mr Nooraidil was travelling in bus 854 when he spotted 4 cyclists in close proximity along a busy road in Hougang. 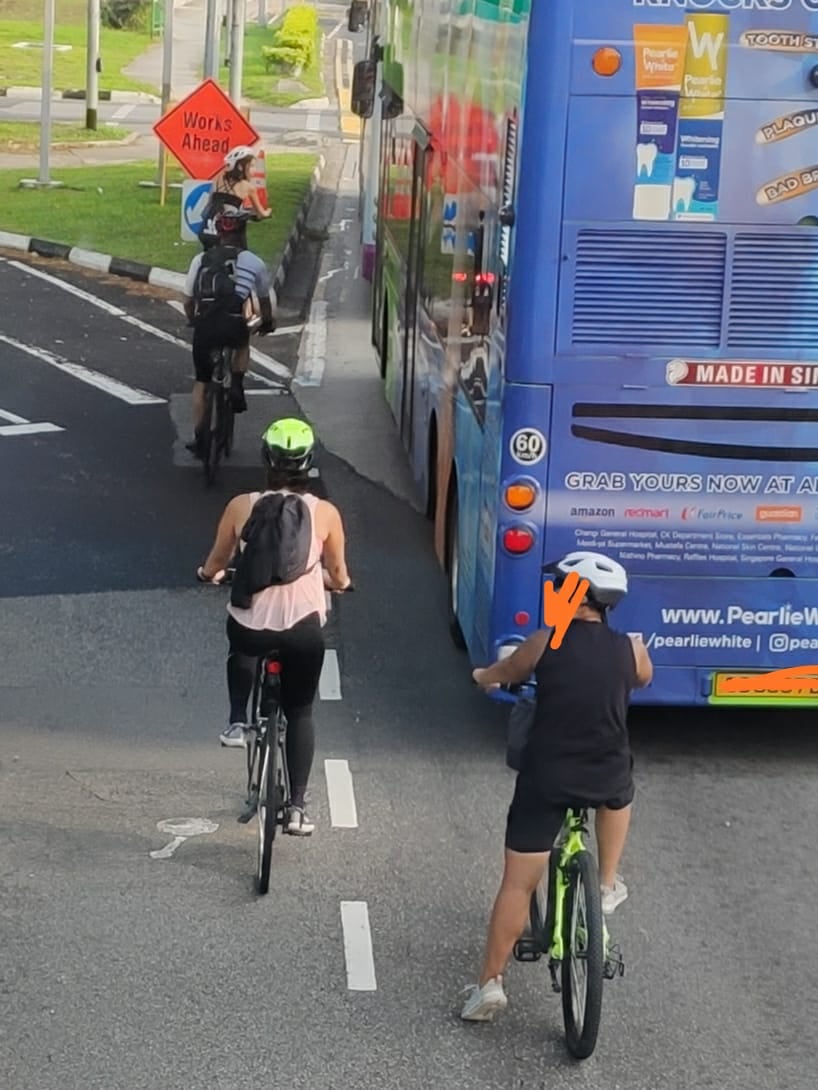 The sight left Mr Nooraidil evidently distraught, as the road is peppered with heavy vehicles like buses and cement trucks.

He claims that some road cyclists rarely look around to check the traffic or give way to buses when nearing a bus stop.

More alarmingly, they frequently position themselves in vehicles’ blind spots — aka the strip of road between pavement and vehicle.

As such, accidents can easily occur with the driver’s field of vision compromised.

Cyclists should take to emptier roads

Given their relative sizes, cyclists are more prone to injuries, some of them fatal, when caught in an accident with bigger vehicles.

Meanwhile, the driver is more likely to be liable for reckless driving causing injuries or death, which would probably cost them their jobs.

However, that’s not necessarily fair, claims Mr Nooraidil, as drivers can’t be blamed for their vehicles having blind spots.

The same applies to heavy vehicle drivers and bus captains who may spend the rest of their lives in the shadow of an unfortunate accident. 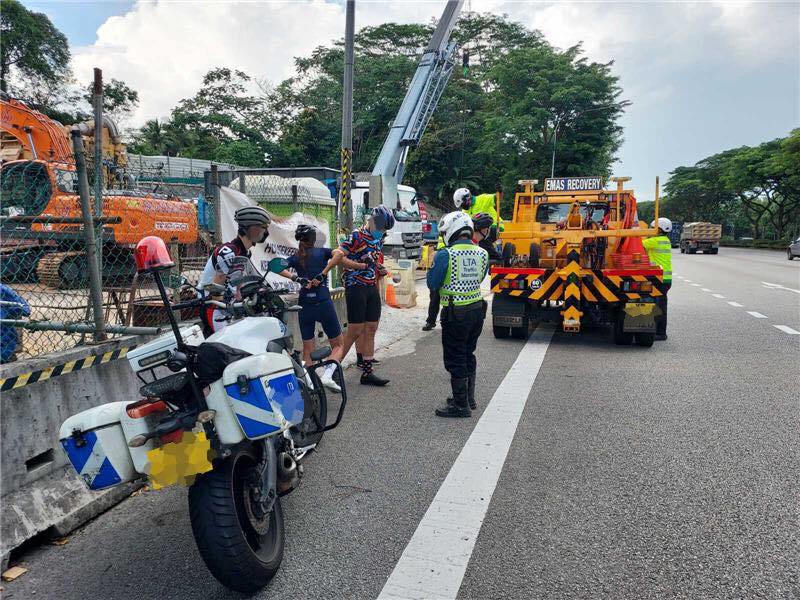 Therefore, the OP pleads with cyclists to refrain from travelling on busy roads.

Instead, they should join the pedestrians on footpaths.

Alternatively, they can choose emptier roads, which are less dangerous to cycle at a higher speed.

A possible reason why many cyclists seemingly continue to put themselves at risk, claims Mr Nooraidil, is that they’re not aware of the dangers.

One important aspect is how all vehicles have blind spots, with heavier ones having more.

Here’s a video by the Automobile Association of Singapore with more details on the subject.

Mr Nooraidil urges cyclists to read up on the potential dangers of cycling on busy roads, which will benefit all road users.

While Mr Nooraidil’s sentiments are certainly sensible, there’s also much room for improvement in the realm of cycling infrastructure on roads.

However, cyclists should keep in mind his reminder to be aware of vehicles’ blind spots and to stay clear of them.

It takes all parties’ efforts to stay vigilant and display thoughtfulness to make our roads safer.