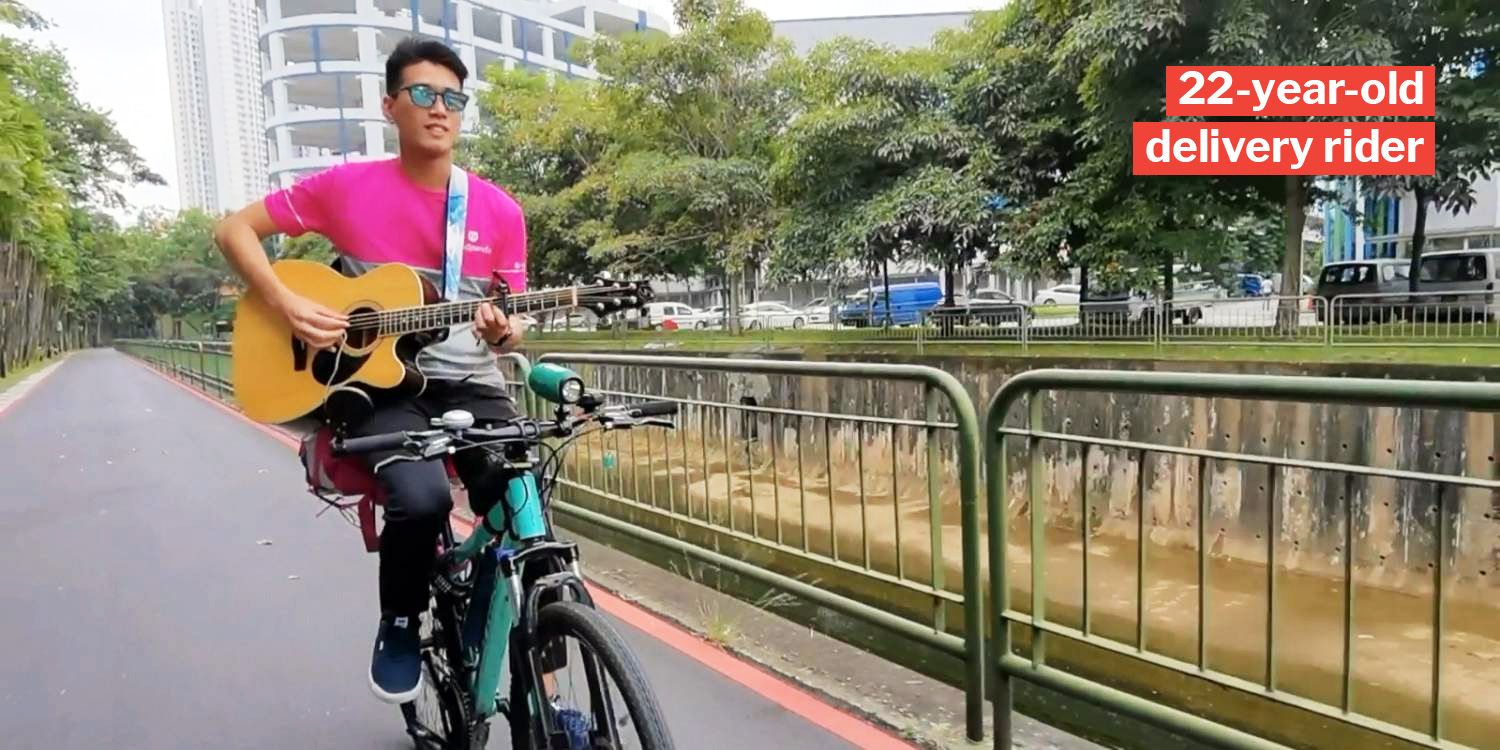 As Singaporeans stayed indoors during the pandemic, working as food delivery riders became a popular option for earning money due to increased demand.

But each rider is unique, with diverse interests outside of their work, such as music and technology.

Fascinated by a tech convention he attended, one delivery rider Lau Jin Ming decided to explore what he could do with artificial intelligence (AI).

The engineering student eventually made a self-steering AI chip for his bike, which frees up his hands to do other activities when cycling, such as taking pictures when he comes across a particularly scenic sight on his ride. 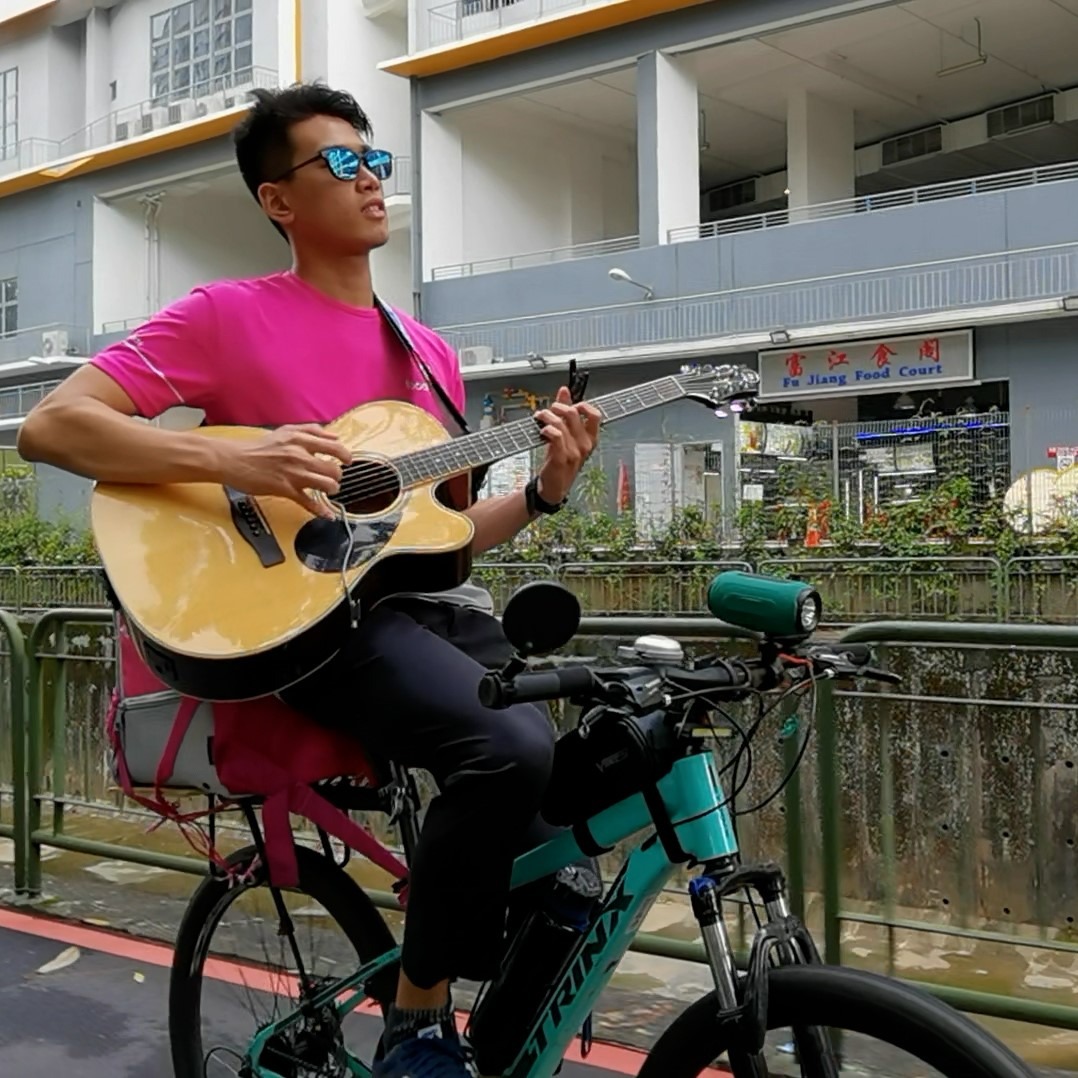 After difficulty securing an internship, he decided to work as a delivery rider during the Covid-19 pandemic.

He was able to combine his love for cycling with his various interests, including transport, and make money at the same time.

When he completed his National Service in early 2020, he found himself in a Covid-19 world, which meant working remotely at home instead of at the workplace.

Because he felt he wouldn’t get the full workplace experience that way, Jin Ming decided to turn to foodpanda and work as a delivery rider before his enrollment in NUS. 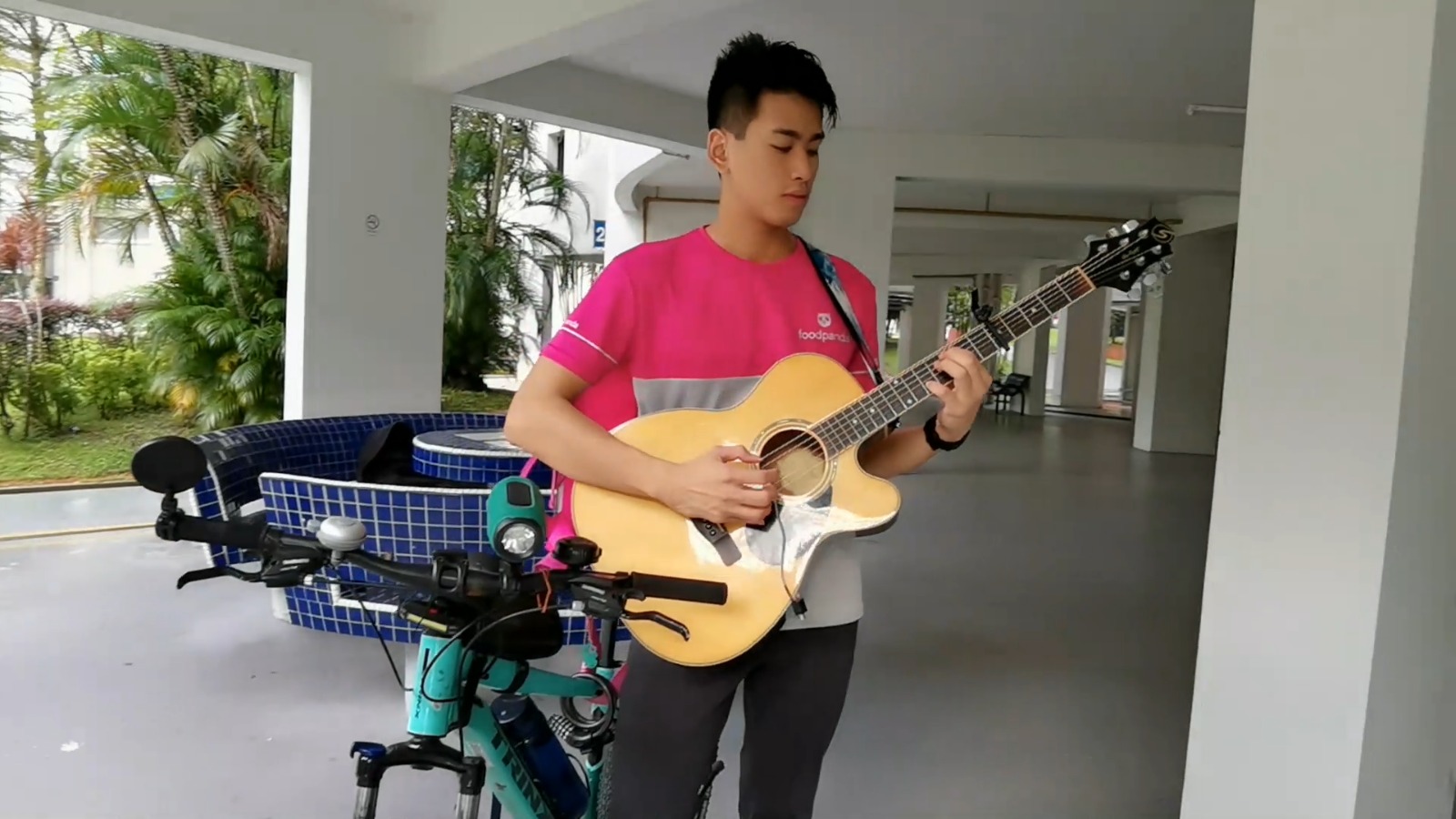 The job allowed Jin Ming to combine the joy of riding with a way to earn money and venture outdoors during the pandemic.

Jin Ming’s curiosity about tech and AI was sparked at a convention, BrainHack, and he decided to try something out on his own after that.

He realised that he could apply AI to various things in life. And since he also cycles a lot, he started thinking about how to implement AI onto a bicycle.

Hence, the idea for a self-steering chip was born.

Cycling around Singapore became a casual way for Jin Ming to explore Singapore and document his life around him, and his AI chip frees up his hands to record beautiful sceneries on the go. 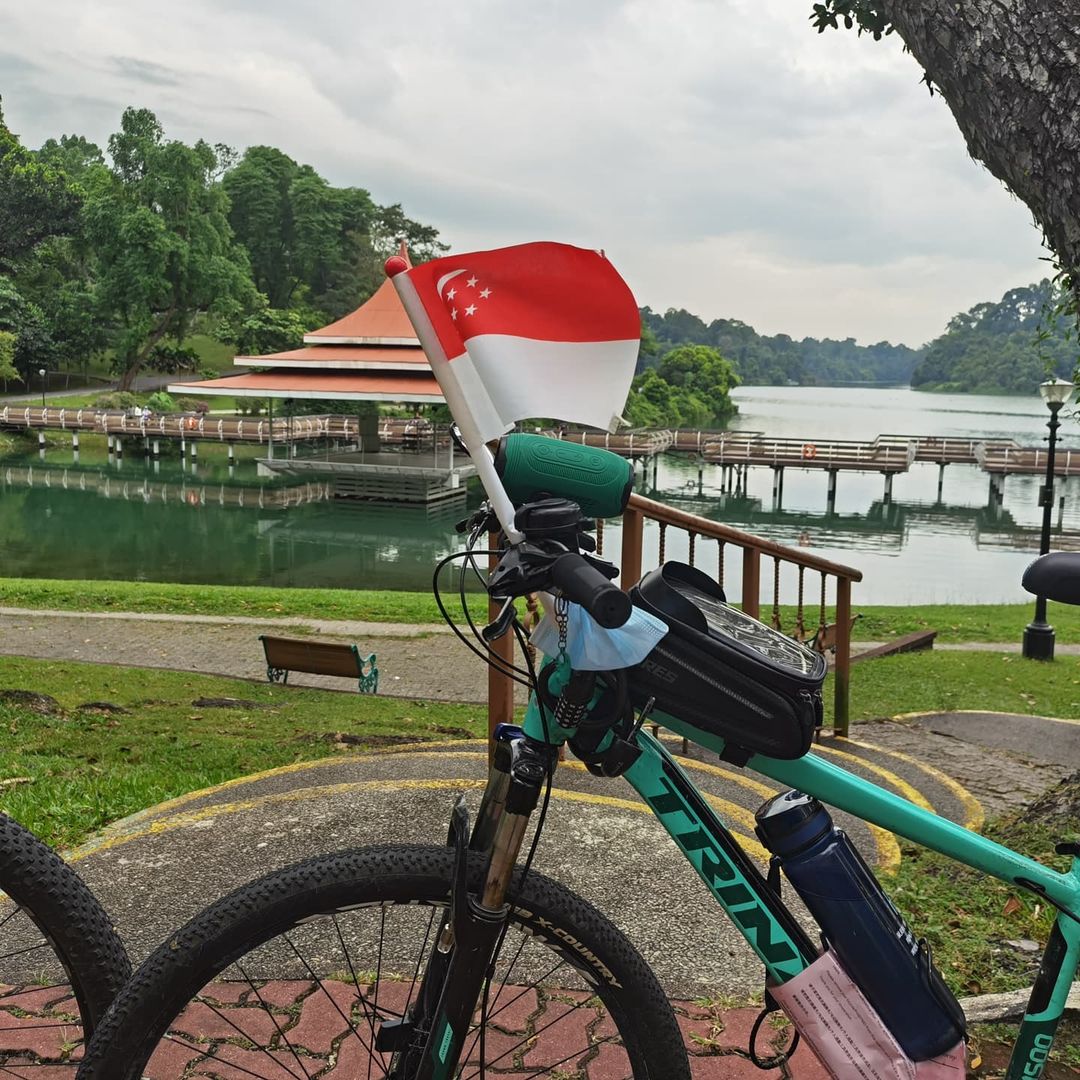 However, it took him a year to perfect the technology as the main issue he faced was programming the steering mechanism, specifically how a bike turns.

“When you want to turn left (while cycling), you actually turn right a little before turning left. So it took me 1 year to figure that out.”

And once he did, the process of making the chip became smooth-sailing after that.

Jin Ming said there are many misconceptions about what the AI chip does. Basically, the chip helps him steer the bike hands-free as it can chart a path independently.

The answer as to whether the bike can do things like stand on its own or balance itself is — no.

“What it does is that the AI analyses what is in front of it and follows a path, be it a PCN or the path below your block, in real-time,” Jin Ming explained.

This makes for some practical uses, such as grabbing a quick bite while riding to fulfil his delivery orders.

In other words, the chip helps him to go hands-free in situations where he might need it.

Works on music when not working

Despite his initial difficulties, Jin Ming managed to secure an internship with a semiconductor company this year. When he’s taking a break from work, he picks up one of his instruments.

Alongside cycling, music is what Jin Ming puts his time into outside of work. He mostly posts his music covers on Instagram. 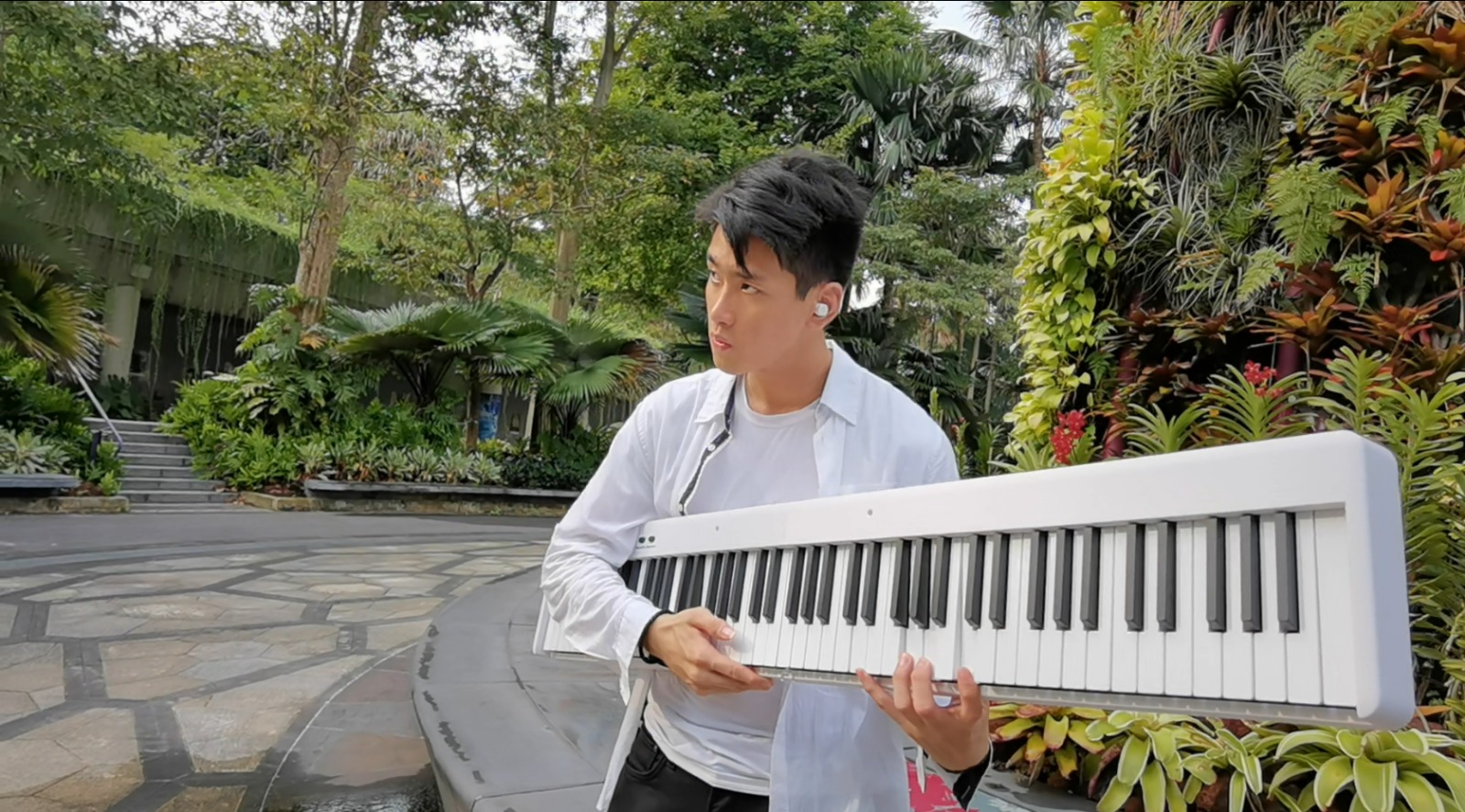 At the age of 5, Jin Ming was instinctively drawn to a small keyboard inside a kid’s store at IMM in Jurong.

According to his mother, he could replicate the background music playing in the store perfectly without ever playing the piano before.

His parents decided to get him a piano after that, and Jin Ming taught himself how to play by picking up sounds by ear and playing the notes on the piano.

Perhaps this background allows Jin Ming to do things like creating a mashup between classical artists and modern ones like Frank Sinatra.

Over the years, Jin Ming has picked up even more instruments, such as the:

Although Jin Ming cannot read notes and doesn’t know music theory, he’s still found a way to compose music and has done so for his Choir CCA in secondary school.

He continues to help out as an alumnus for the CCA.

When MS News spoke to Jin Ming, his passion for transport shone through his ideas for how Singapore could improve its infrastructure.

One of his hopes is to increase the safety and availability of cycling paths to create a smaller reliance on vehicles.

“Road cycling (is a thing) because Singapore’s pavements… aren’t friendly for cyclists. Secondly, it burns a lot of calories because you just want to go as fast as you can.”

At the same time, improving the accessibility of cycling paths can also ease the tension that currently exists between cyclists and others, like pedestrians and road users.

With many delivery riders also reliant on bikes, this can definitely improve the experience for everyone—from riders to customers and businesses.

His goal is to secure an internship at the Land Transport Authority (LTA) or a similar transport-based statutory board, before launching his own start-up once he has enough funds.

While Jin Ming said he doesn’t have a specific idea yet, it may well be the case that in a decade from now, we’ll be talking about a start-up founder who used to deliver food on a bike.

A man of diverse talents

From self-steering to composing songs and thinking about how transport can be improved, one gets the idea that delivery riders are definitely composed of Singaporeans from all walks of life.

Beyond their main job of providing a service, these people all have their own stories and ideas to share.

So perhaps if you’re in between jobs or awaiting an internship, why not take up delivery riding as Jin Ming did? Maybe you’ll find out what you really want to do.