Since the start of the Covid-19 outbreak, demand for deep cleaning and disinfection services have unsurprisingly increased.

While that means that cleaners have become a very important part of society, their jobs have also become tougher and more complicated. Not only have they been taking on more thorough disinfecting jobs, their working hours have become longer.

Cleaning teams in a TODAY article have said that they are “struggling to manage” with the increased demand for their services due to lack of manpower. A disinfection team even said that its working hours have doubled from eight hours to 16 hours a day. 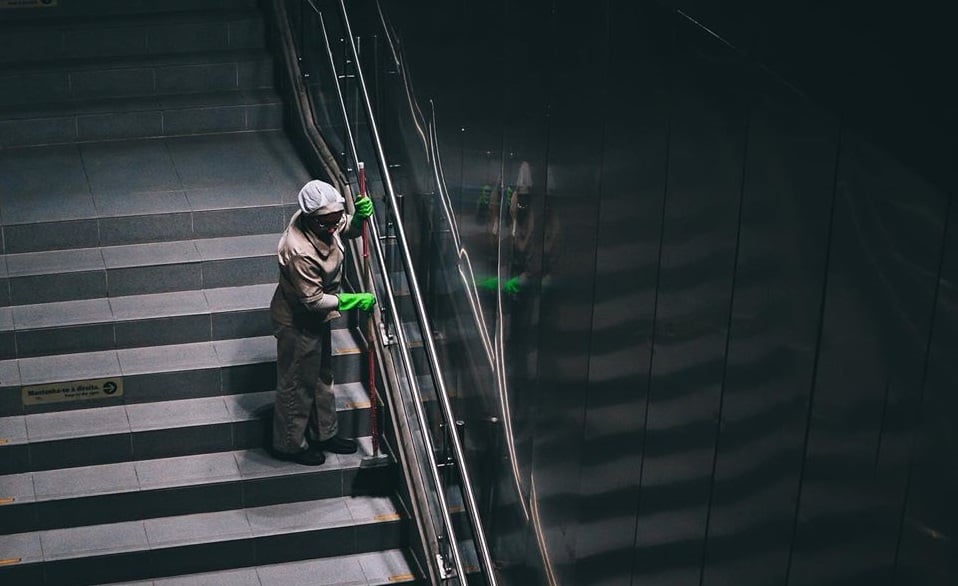 As Covid-19 seems to be here to stay, a team of scientists have found a solution to cope with cleaning tasks — a disinfection robot. 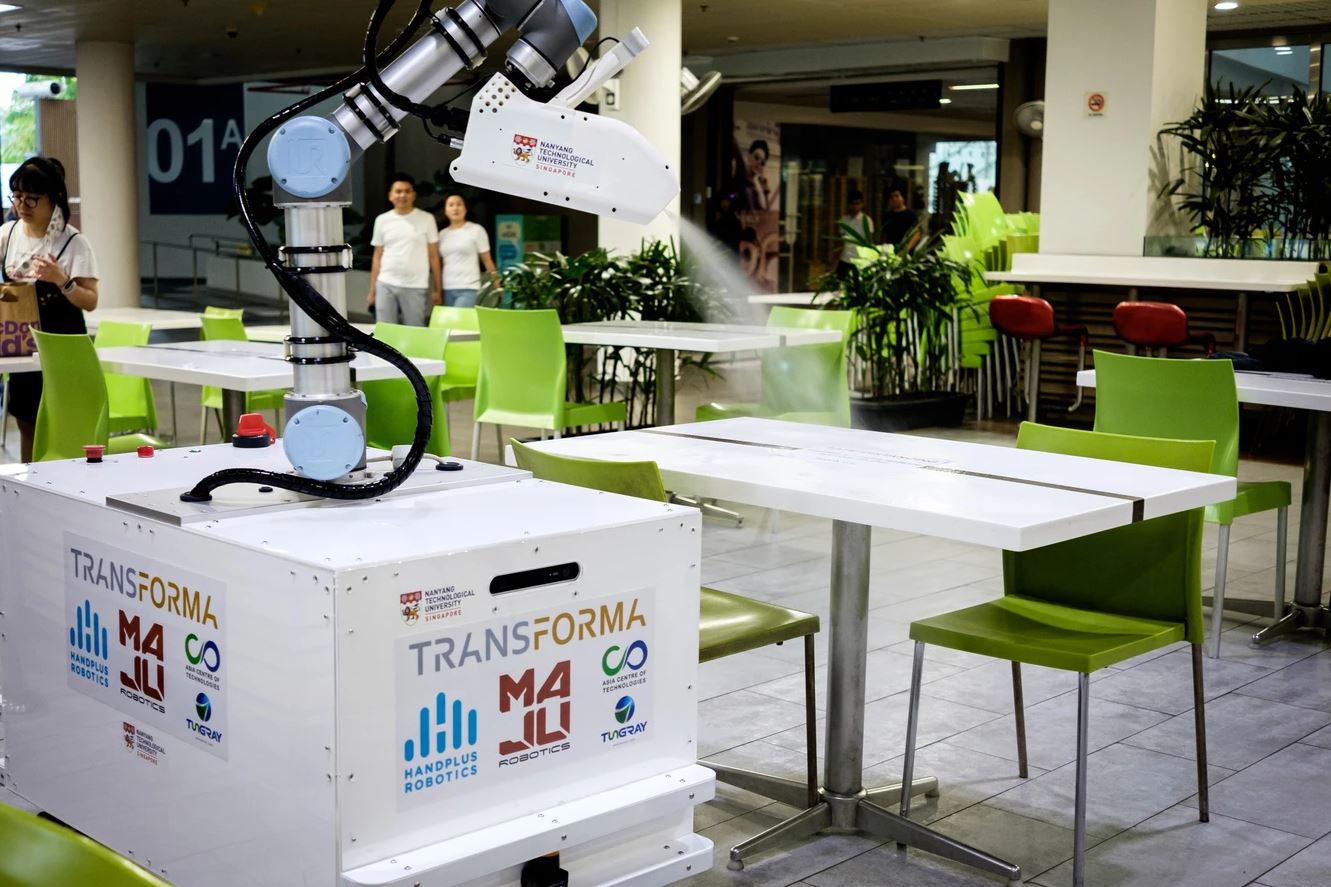 NTU researchers came up with robot prototype in 2 months

The eXtreme Disinfection roBOT, or XDBOT for short, was developed by researchers from Nanyang Technological University (NTU) led by Professor Chen I-Ming, according to a press release from the university on Tuesday (14 Apr).

Prof Chen, who is a roboticist from the NTU Robotics Research Centre and founder of tech firm Transforma Robotics, said the idea for a disinfection robot came about when Covid-19 started spreading around the world in February, and cleaning was stepped up all over Singapore.

He also said in the press release,

To stop the transmission of a virus means we need a way to quickly disinfect surfaces, which is a labour-intensive and repetitive activity.

Based on this immediate need, his team – which worked with Transforma Robotics, Hand Plus Robotics and Maju Robotics, and had assistance from industry partners – developed and built a prototype for XDBOT in just two months. Features of the robot

The XDBOT is reportedly able to disinfect a surface area four times larger than that cleaned by humans in the same. How does it do that?

Here are some of its features that help:

1. Its 6-axis robotic arm can mimic human movement. However, unlike a human, it can easily reach challenging locations such as under tables and beds, as well as doorknobs, tabletops and light switches. The arm can also be raised to spray area that are higher than those an average human can reach.

This differentiates it from other cleaning robots that are designed to clean only even surfaces at ground level. 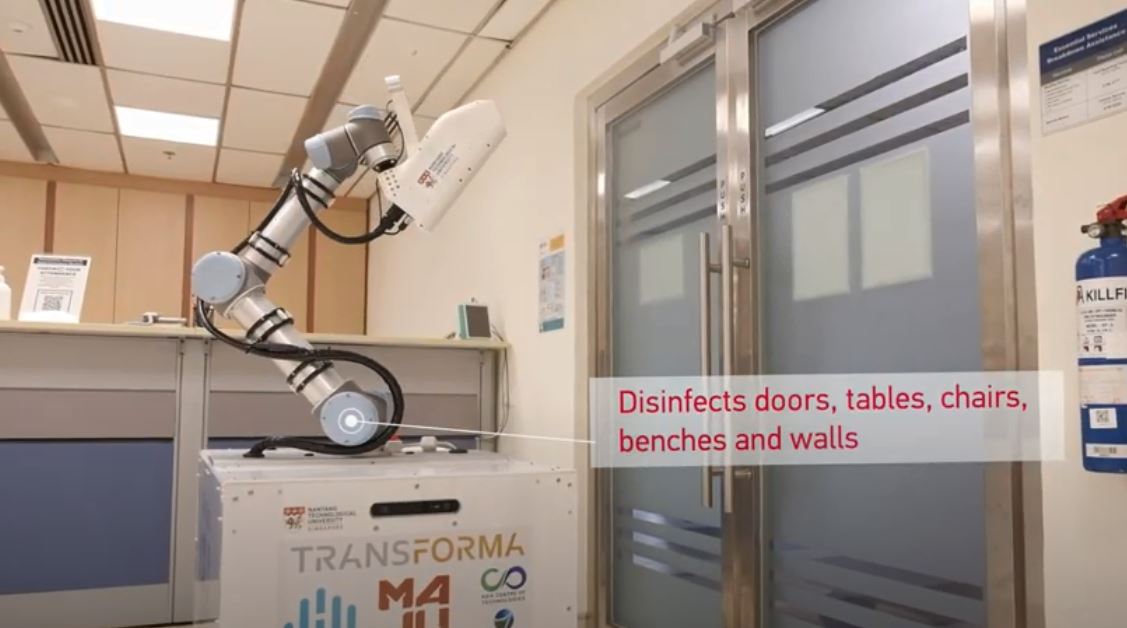 2. It has an electrostatically charged nozzle, instead of a typical pressure-spray nozzle.

It works similar to magnets, in that its chemicals will be sprayed with a positive electrical charge, and attach to negatively charged surfaces. So surfaces that have already been sprayed will repel the spray and the process is more efficient.

This means the disinfectant can be sprayed farther and in a wider range, as well as behind and over hidden surfaces. 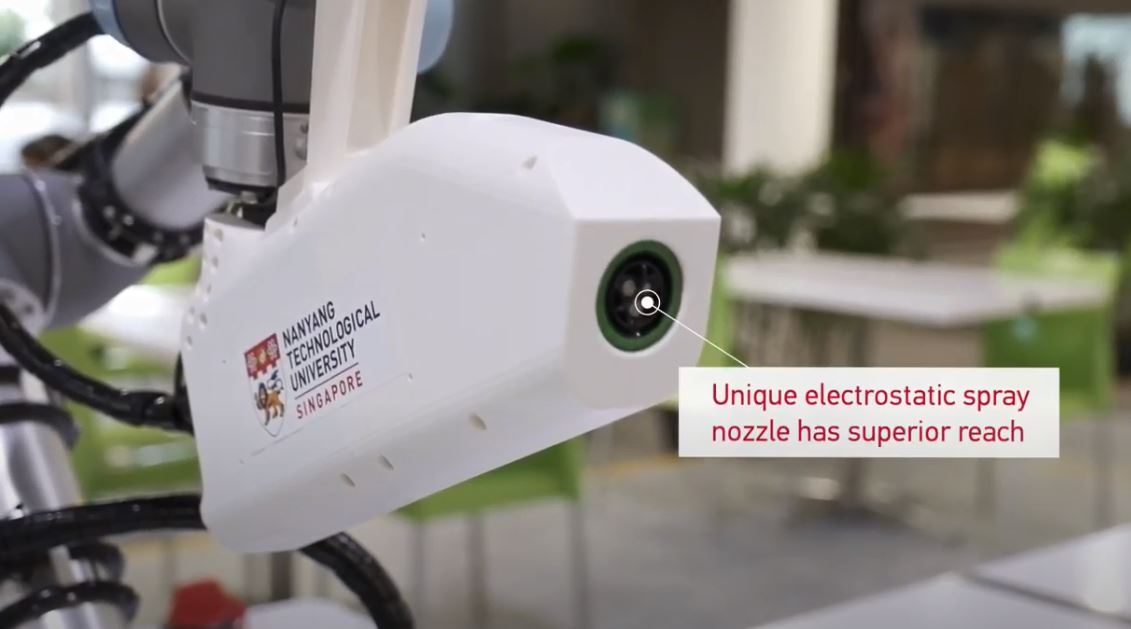 3. It has a semi-autonomous control unit with motorised wheels, which allows it to move around on its own in all kinds of environments using sensors and cameras. Its arm can be guided by an operator who can be holding a laptop or tablet up to 30m away. This distance can go up to 50m if more antennas are installed. As the robot can be controlled remotely, not only does it reduce the need for cleaning staff to clean dangerous areas like engine rooms, but it also reduces the risk of staff getting exposed to the virus. 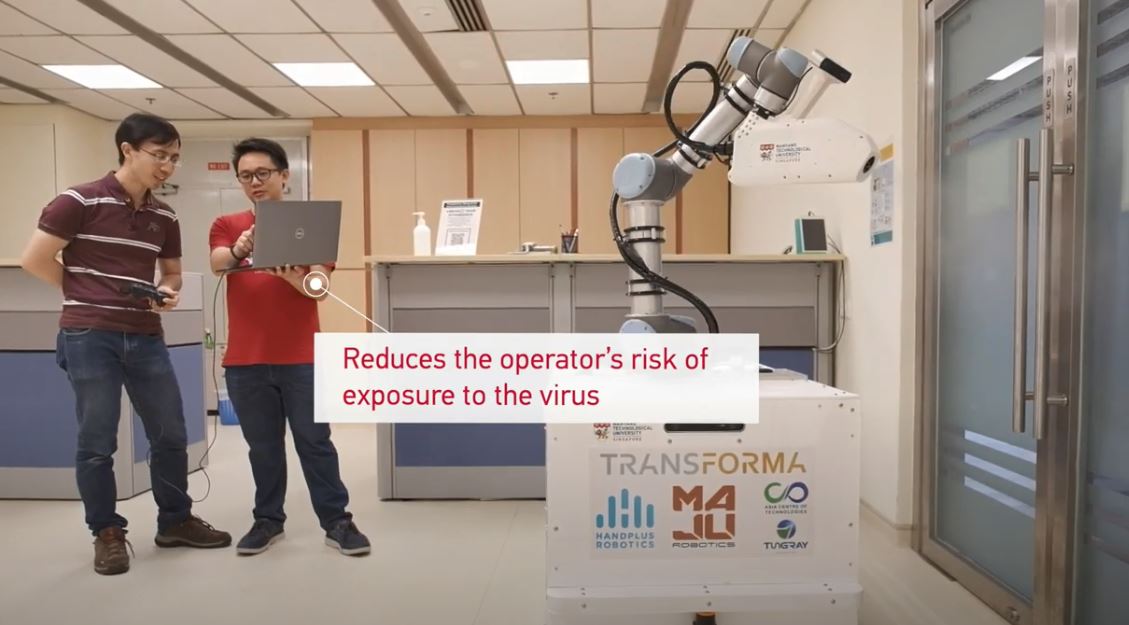 5. Its battery is rechargeable, and can power the XDROBOT continuously for 4 hours — roughly half the normal working shift of a human cleaner. 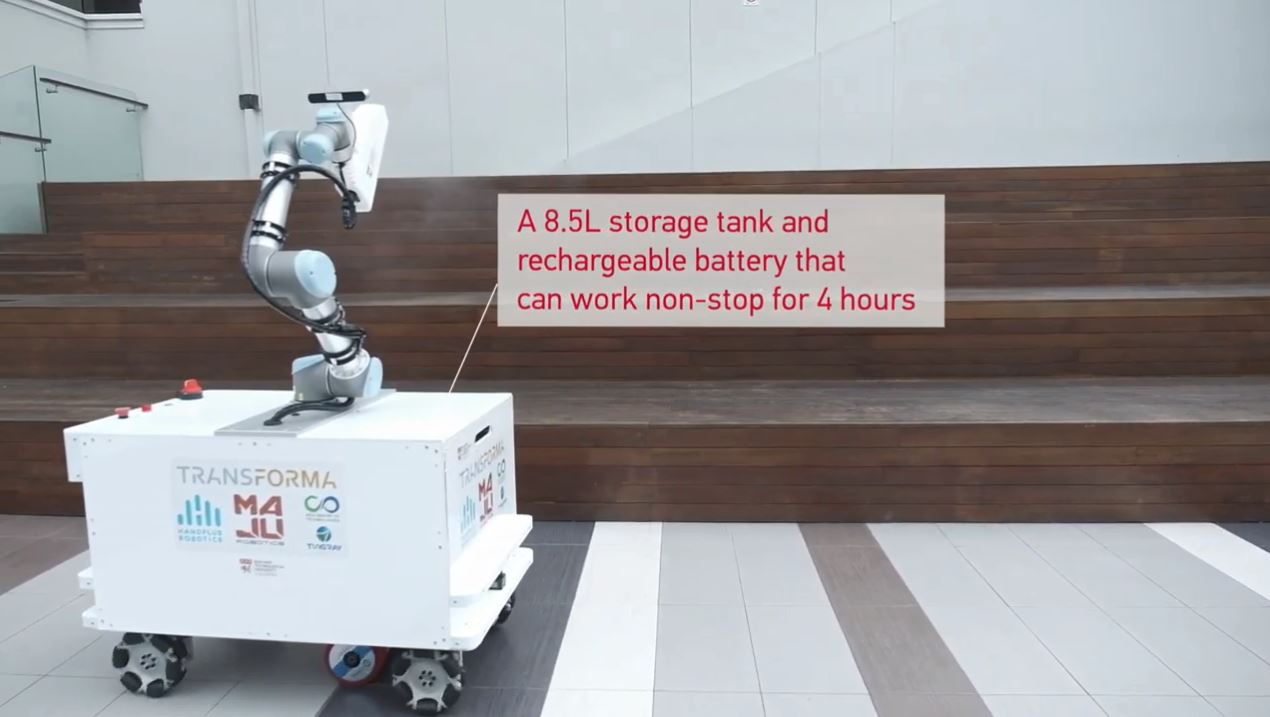 Public trials are being planned

While the XDBOT has been tested around the NTU campus, public trials are being planned so that the robot can be called into action as soon as possible to help alleviate the Covid-19 crisis.

To stop the transmission of a virus means we need a way to quickly disinfect surfaces, which is a labour-intensive and repetitive activity. 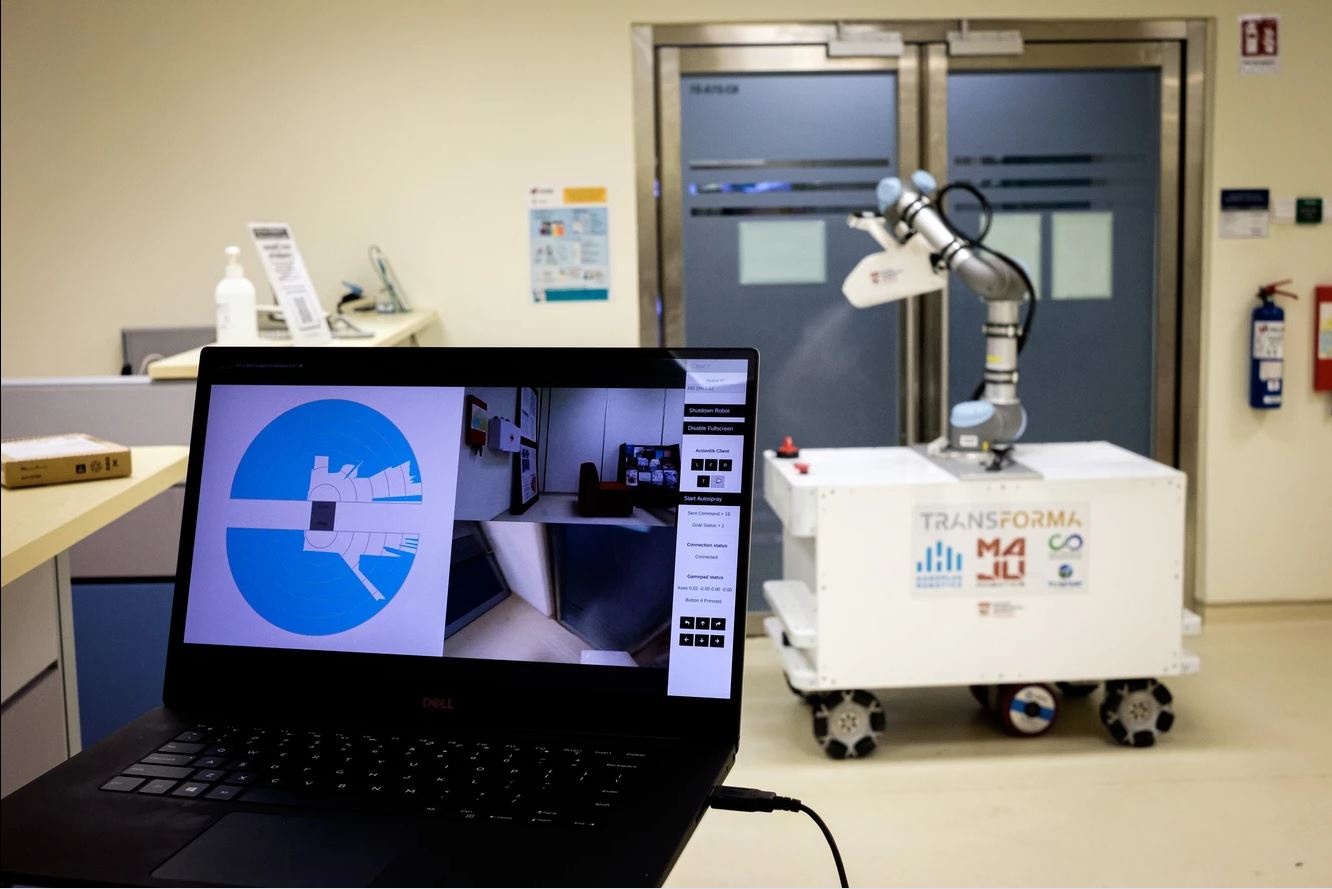 Lightening the load of our cleaning staff

While human staff will presumably still be needed to clean sensitive areas, operate the XDBOT, and provide quality control, it’s about time that technology is used to lighten the loads of our overworked cleaning staff.

After all, they deserve to have an easier time on the job, now that they are needed more than ever.

Let’s hope the XDBOT will be called into action sometime soon.