Would your dog appreciate being coloured?

It is fairly common for pet owners to dye their pets, especially during festive occasions like Chinese New Year or Christmas.

But one Thai dog owner who decided to have her dog’s ears and tail coloured reddish pink certainly didn’t expect the horror that followed.

While the original Facebook post documenting the event seems to have been taken down, a re-post of it in Thai can be found here. We also translate and summarise the post for you after the jump. Ear falls off after allergic reaction

On Wednesday (6 Feb), the owner of a Pomeranian dog named Diffy brought her canine companion to a salon in eastern Thailand to have her ears and tail coloured.

According to the Facebook post, the dyeing process lasted 40 minutes, involved aluminium foil, and had no heat involved. That said, it wasn’t stated if the salon was one dedicated for pets or just a regular one for us hoomans.

After having her fur dyed, the owner noticed that Diffy’s ears were drooping, in contrast to her pre-dye state where her ears were perking up.

Sensing that something was amiss, Diffy’s owner enquired about her dog’s condition. Salon staff allegedly assured her that Diffy’s ears would return to normal after 2-3 days. 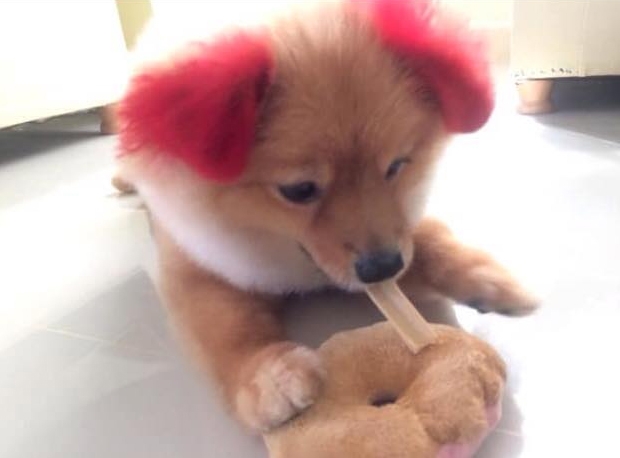 Despite the salon’s reassurance, Diffy’s ears started burning up due to a suspected allergic reaction to the dye used. The pooch also started developing itchy skin and scabs soon after. Things only got worse from there. As the scabs came off later in the day, Diffy’s left ear allegedly came off altogether. Yup, you read that right.

But instead of pointing fingers at the salon involved, Diffy’s owner blamed herself for the mishap. She also pledged to love Diffy all the same and claimed that she will never abandon her, adding the hashtag “mom is sorry”.

In most cases, animal dyes generally consist of either organic or plant extract that are reportedly safe for animals.

However, The Society for the Prevention of Cruelty to Animals (SPCA) advises pet owners against dyeing their pets as it is “unnatural and unnecessary”.

Pets can also be physically harmed and subjected to stress in the process.

Given the freaky nature of the incident, some netizens were understandably skeptical about the alleged events.

In response, Coconuts Bangkok approached a professional veterinarian, who confirmed that it is possible for a dog’s ear to come off due to the dyeing process.

The chemical could have burned the ear off, the salon could have done it too harshly, the dog could have developed a severe allergy to the dye. This could have been caused by a lot of reasons.

But this doesn’t solve the mystery of why Diffy’s right ear and tail remained intact despite being dyed pink as well. Lastly, there were no mentions of any follow-up actions at a vet after Diffy’s left ear came off — which would surely be the first response of any responsible pet owner.

This unfortunate tale quickly became viral in Thailand, with mainstream media reporting on it.

International publishers from the likes of Daily Mail, Metro and even UNILAD also caught wind of the post and covered this shocking story too.

Most netizens reacted with shock and horror.

Many also slammed Diffy’s owner for her actions.

A cautionary tale for pet owners

Even though we can’t confirm if this story is true, it still serves as cautionary tale for pet owners who wish to colour their pets for fun.

Artificially colouring our favourite canine companions actually does them no favours, and serves no purpose other than for our own amusement.

Let’s never forget that our pets love us unconditionally regardless of how we look. Shouldn’t this standard be applied both ways?

Let us know your thoughts on Diffy’s story below.