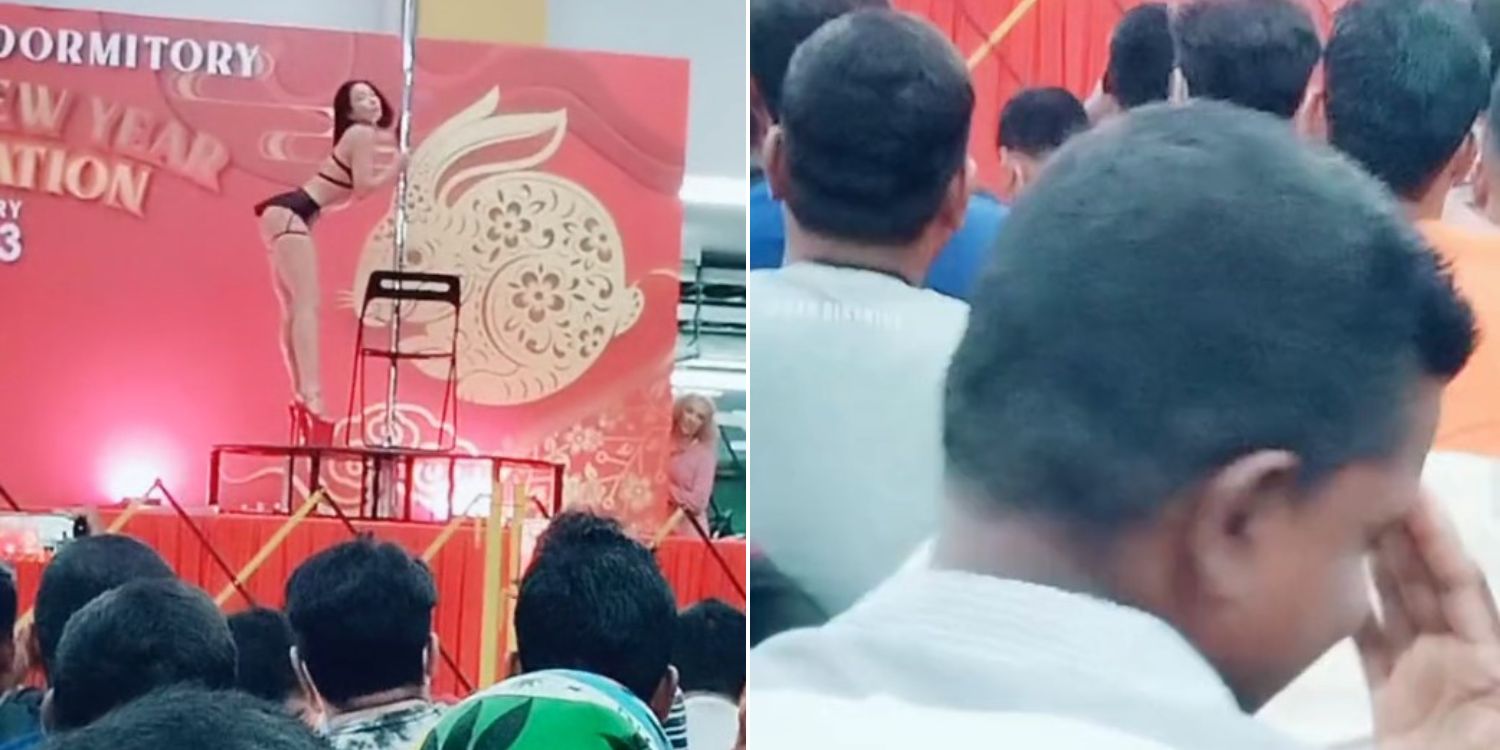 Another less risqué dance seemed to be well-received by the audience.

While Singaporeans are currently celebrating Chinese New Year (CNY), migrant workers living in dormitories deserve to have some fun during the holidays too.

Among the entertainment provided was apparently a pole dancing segment. 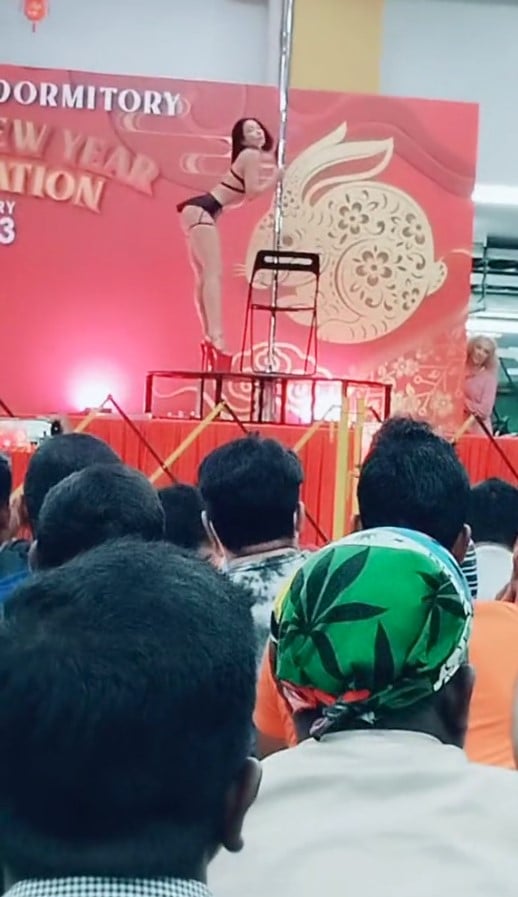 While it was difficult to gauge the reactions of the largely male audience, one man seemed to cover his eyes in slight embarrassment.

Woman gyrates around pole in dorm

Part of the performance was captured in a TikTok video posted on Saturday (21 Jan).

The 33-second clip showed a woman dressed in only a black bikini set with garters and red heels gyrating against a pole set up on stage.

Her moves were made to the song “Feeling Good” by Michael Bublé. 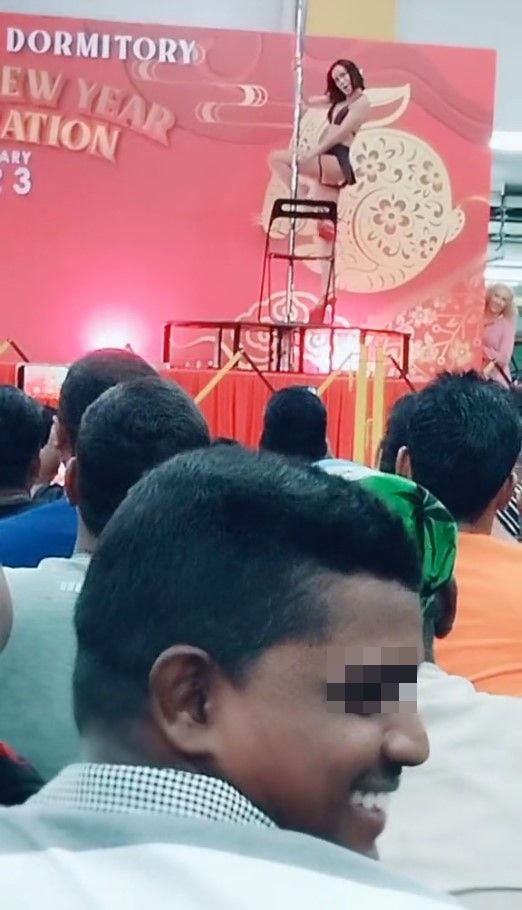 Seated in front of her were a group of male migrant workers who were ostensibly residents of the dormitory.

At one point, the woman turned sideways and stuck her left leg in the air, prompting the man right in front of the camera to sheepishly turn his head sideways.

He also briefly covered his eyes with his hand, as if from embarrassment. 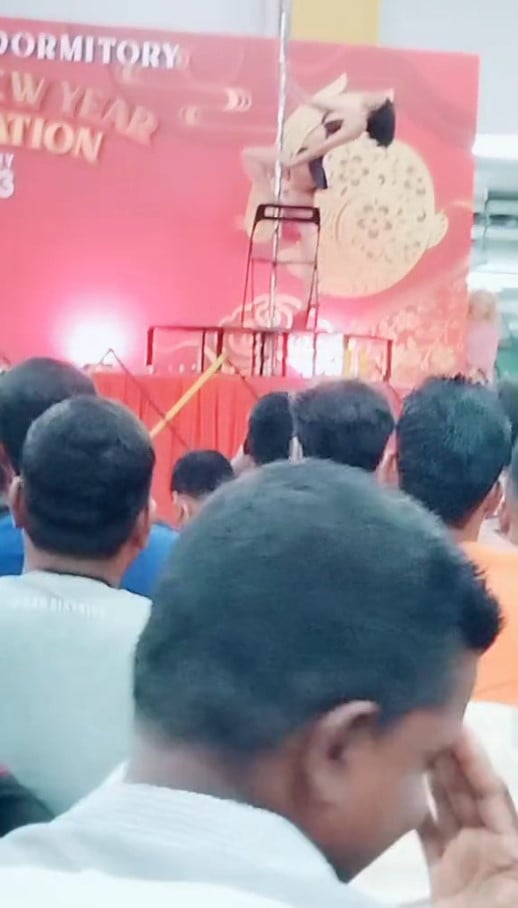 The dancer continued her routine, twirling around the pole and balancing suggestively on a chair. 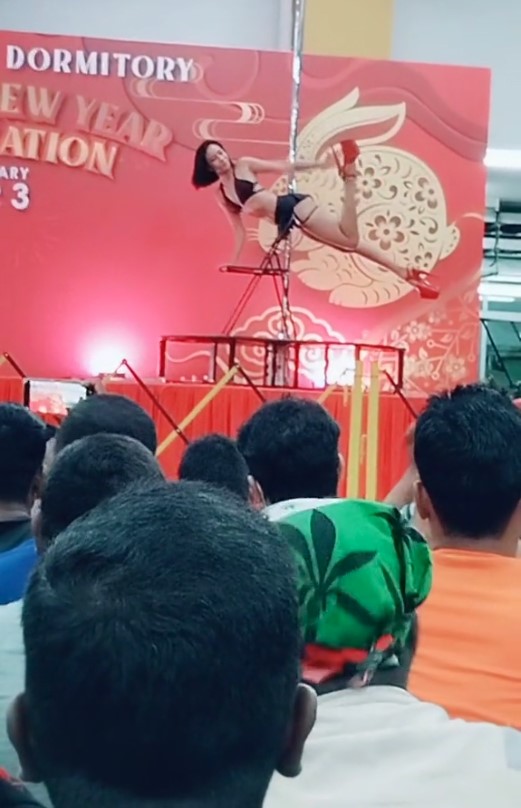 While only part of the backdrop could be seen, it appears to indicate that it’s a CNY celebration at a dormitory, and the rabbit design clearly means it’s for the Year Of The Rabbit.

Another TikTik video of the same event showed a male dancer putting on a less risqué show, this time to cheers and whistles from the crowd. 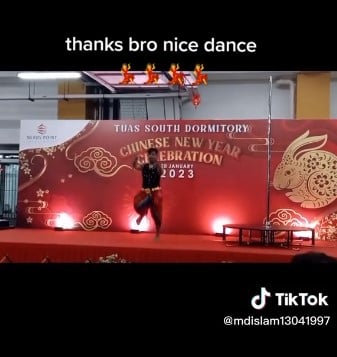 A fuller view of the signage can be seen in this video, indicating that the event was a CNY celebration at Tuas South Dormitory on Friday (20 Jan).

In this video, the pole can be seen on stage, unused. 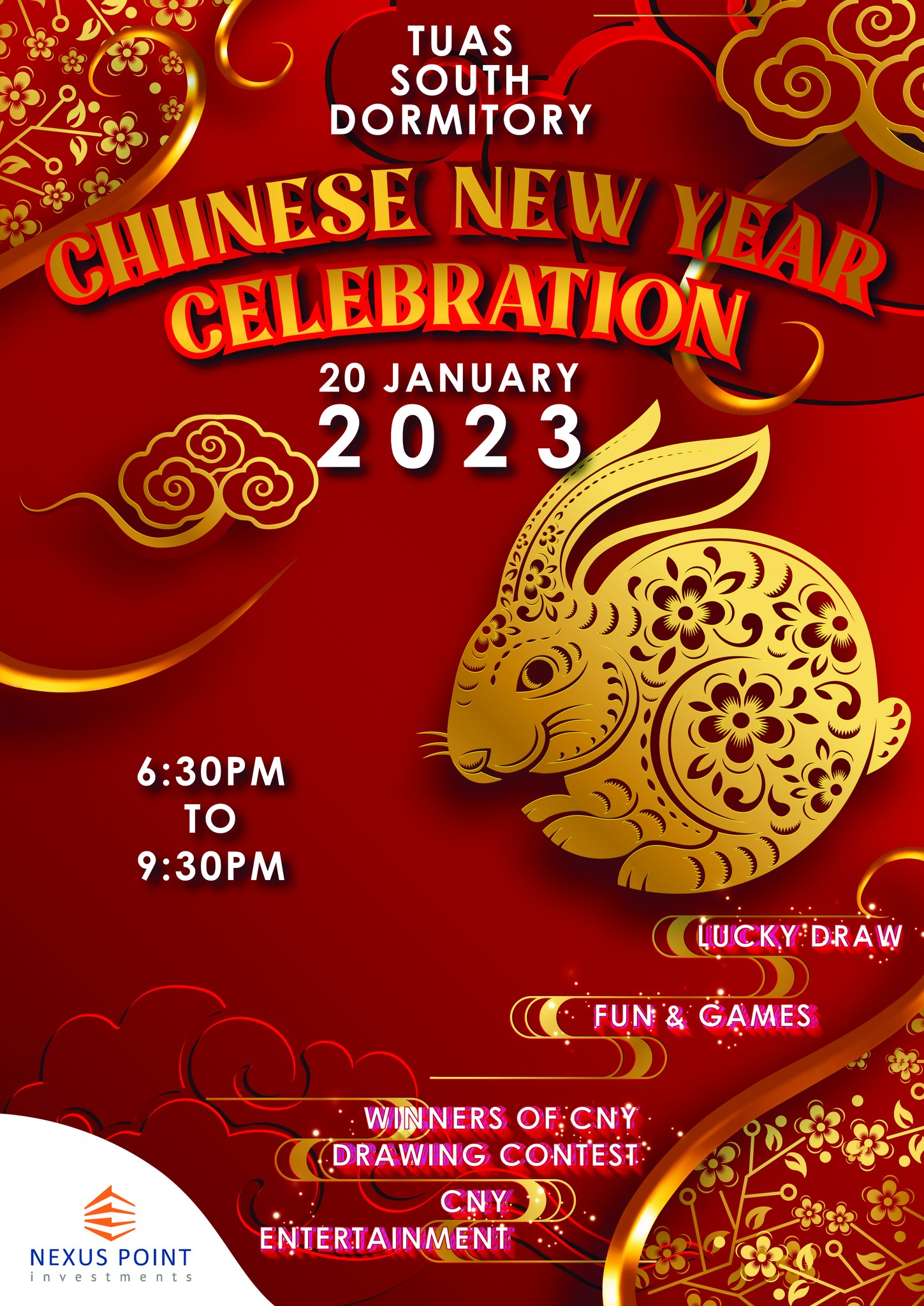 The poster for the event promised “CNY entertainment”, among other activities.

Several were incredulous that such a performance could be put up for CNY, while one netizen thought it was a “disgrace” to the festival. Another commenter felt bad for the wives of the migrant workers. Someone also felt second-hand embarrassment for the pole dancer.

One woman placed the blame on the organiser.

However, a couple of netizens approved of the show, saying it must have been the dancer’s dream. 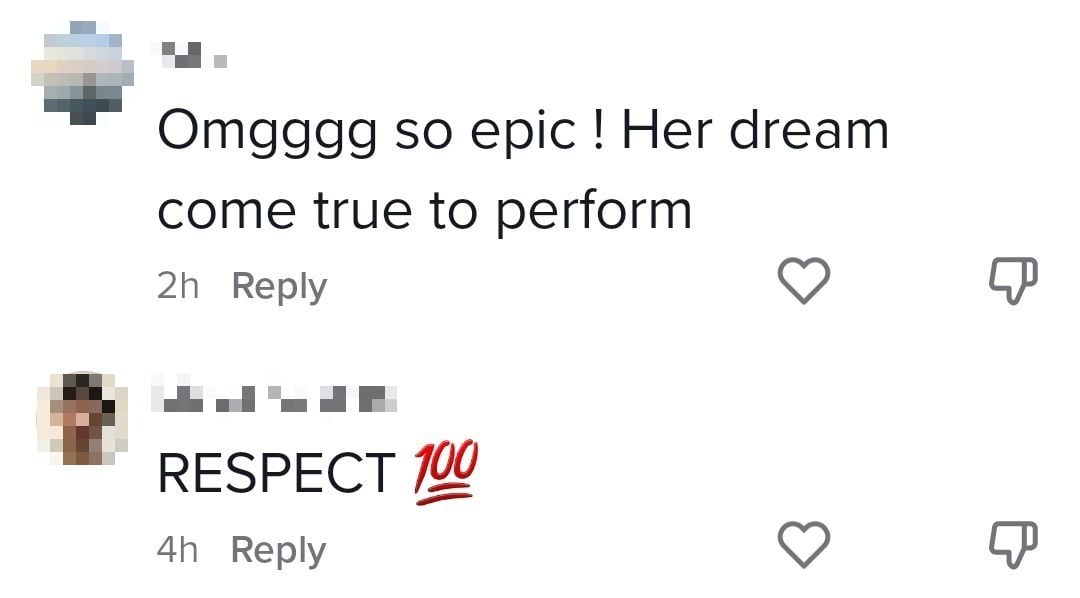 One contributor reasoned that this particular audience “wouldn’t understand” other types of performances — although the other video with the male dancer showed that the crowd was quite happy with that performance. 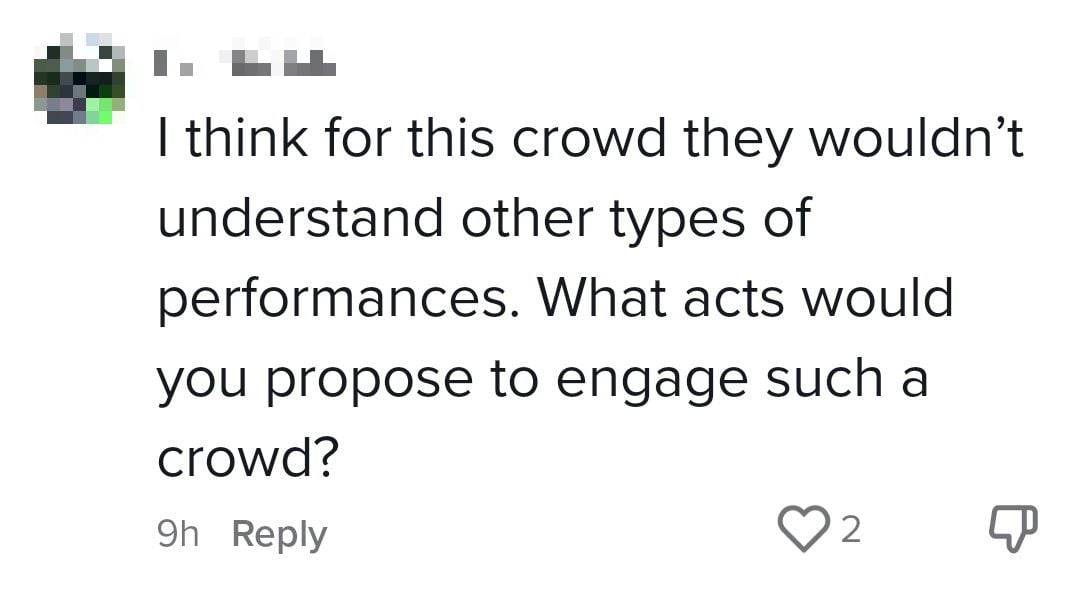 Another steamy show in Taiwan

This isn’t the first time a steamy show was put up for an unlikely audience.

Last year, a lady in lingerie performed for elderly residents of a veterans’ home in Taiwan for the Mid-Autumn Festival.

The home’s management apologised for hosting the incident after getting flak from netizens.

MS News has reached out to Nexus Point Investments, which manages Tuas South Dormitory, over this incident and will update this article if and when they respond.