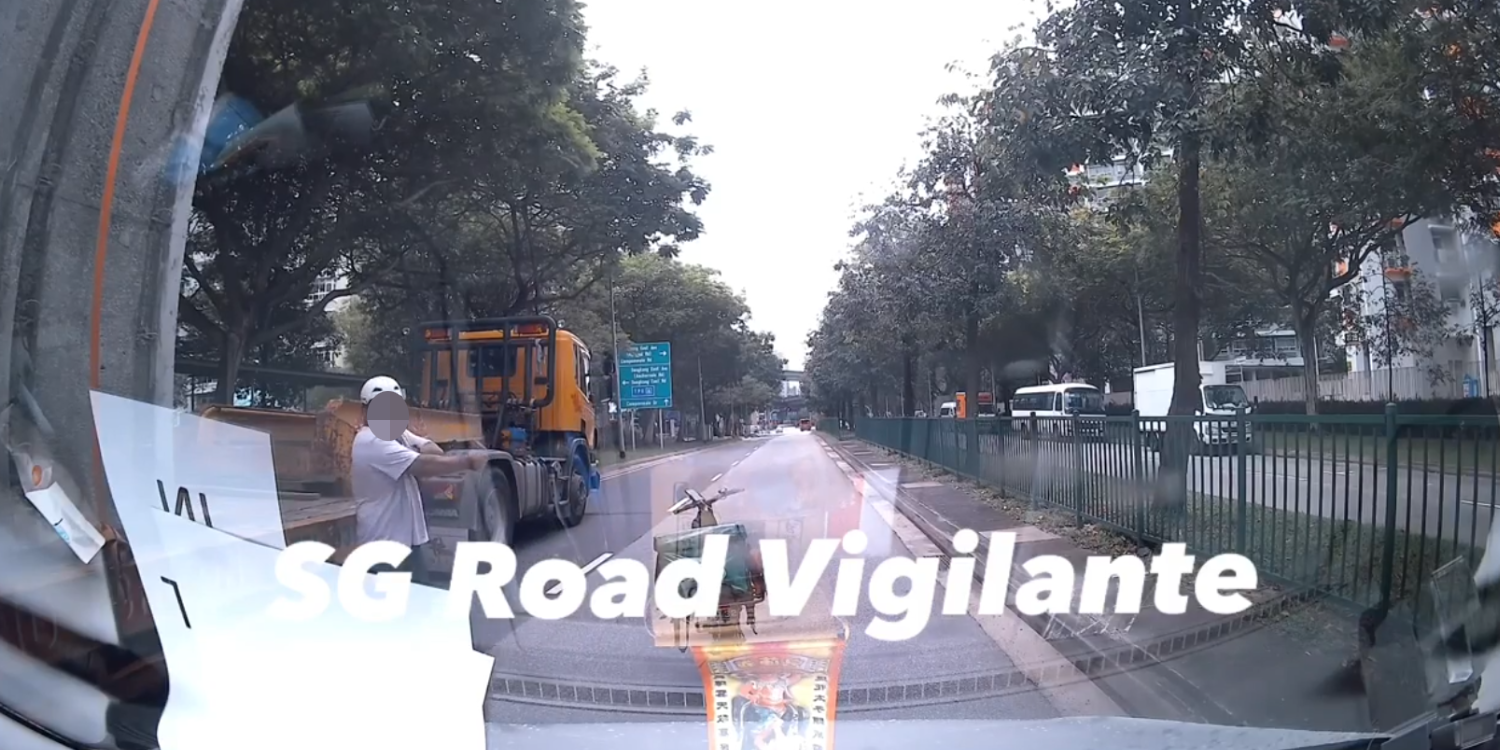 Instead of accelerating, the rider slowed down after hearing the driver honking.

Driver Honks At Cyclist For Hogging Lane Along Sengkang Central

While travelling on the roads, we may encounter drivers who’d honk for prolonged periods. While most of us may either signal apologetically or choose not to respond, one cyclist in such a situation decided to let the driver have a piece of his mind.

In a video posted on Facebook, a driver can be heard honking at a food delivery rider who appeared to be hogging a lane in Sengkang.

Visibly annoyed, the cyclist got off his bike and seemingly gestured for the driver to demonstrate how he was supposed to cycle any faster.

Clips posted on the SG Road Vigilante Facebook page showed the cyclist initially riding in the left-most lane of the road behind a double-decker bus. The incident apparently happened at about 1.52pm on Thursday (9 Jun) along Sengkang Central.

Without warning, the cyclist started veering to his right, prompting the driver of the dashcam vehicle to sound the horn.

Visibly annoyed by the driver’s actions, the cyclist aggressively indicated his intention to cut into the right-most lane.

Cyclist alights & gestures for driver to have a go at riding

A few seconds later, the driver again honked at the cyclist. But instead of accelerating, the latter started slowing down and eventually dismounted his bike.

The cyclist then activated the kickstand and parked the bicycle in the middle of the road.

While standing next to the bike with his arms crossed, he seemingly signalled for the driver to have a go at riding the bike himself.

Sensing that the driver wasn’t going to accede to his request, the rider ended his stunt soon after with a vulgar motion toward the driver.

After the encounter, the rider kept to the right side of the road, seemingly in preparation to turn right at the upcoming junction.

Thankfully, no accidents unfolded and nobody appeared to be physically hurt.

Hope all users will be gracious & understanding on the road

While some may think that the driver could have been kinder in alerting the cyclist, others could argue that the latter should have also made way for other road users instead of obstructing traffic.

Thankfully, the driver did not ‘take the bite’ and pursue an argument, or things could’ve ended a lot worse.

We hope all road users will be gracious and understanding and will do their part to prevent any unnecessary mishaps.