An unexpected gesture of goodwill.

Ask any driver and they’d agree that being stuck at a carpark gantry is a rather frustrating affair. For one driver at a Jurong carpark, insufficient CashCard value became his letdown, as he was unable to cover parking fees.

Though he intended to top up his card, a most surprising saviour came his way.

Several motorcyclists who were there offered to settle his parking fees, without expecting any compensation.

Facebook user Wyser was leaving after a supper session at the Jurong Central Park McDonald’s on Friday night (12 Feb) when he realised that his CashCard had insufficient funds. 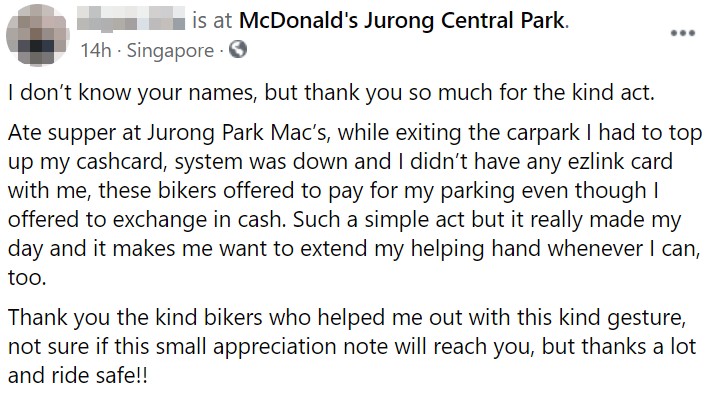 Unable to top it up due to a faulty machine and without a backup card, he found himself quite literally stuck.

Perhaps noticing his predicament, several motorcyclists nearby offered to pay his parking fee for him.

When he tried to pay them the amount back in cash, they apparently refused to accept it.

He did, however, get a partial snapshot of them in his rearview mirror after driving out onto the main road. 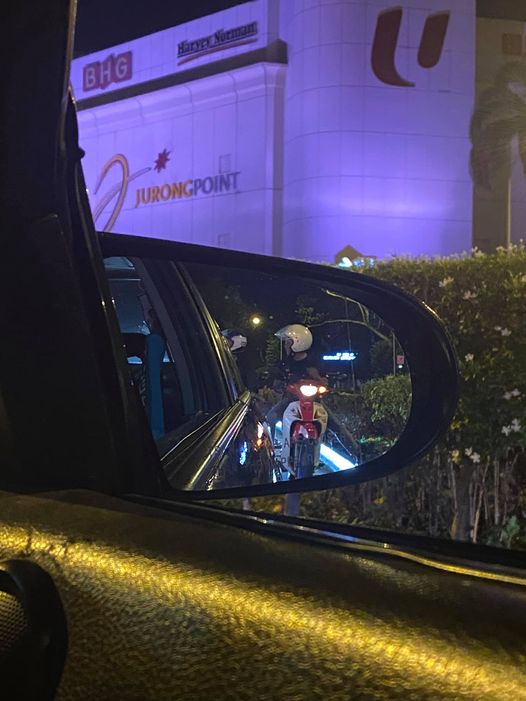 Touched by their “simple act” of kindness, he hoped that his “small appreciation note” via his post will reach the strangers.

With over 700 shares at the time of writing, it appears that it may have, as someone tagged the riders in the comments section.

Wyser thanked them once again for helping and making his day, and wished that they would “(r)ide safe always”.

A little goes a long way

If there’s anything that heartwarming incidents like this prove, it’s that even the smallest gesture can leave a big impact on someone’s life.

Kudos to the kind bikers who sincerely helped the driver without a moment’s hesitation.

We hope that their deed will inspire others to be kind too, and to help those in need.