Drivers In Punggol Throw Punches At Each Other, Police Intervene & Break Up Fight Their partners were also shouting at each other.

Driving can test people’s patience for many reasons. While some can take it in their stride, others can’t seem to be able to avoid confrontations.

Recently, a video of an altercation allegedly between 2 drivers gained traction in the SG Road Vigilante Facebook group. The confrontation in Punggol appeared to escalate, with the drivers throwing punches at each other at one point.

The police eventually had to step in to break up the fight.

According to SG Road Vigilante, the incident happened at 4.45pm on Monday (23 Aug) within the vicinity of Edgedale Plains.

At the start of the video, a bald man who had his back to the cam car is seen exchanging seemingly heated words with a man who had a ponytail and mustache.

As the latter started gesturing, the former held up a balled-up fist as if poised to fight. 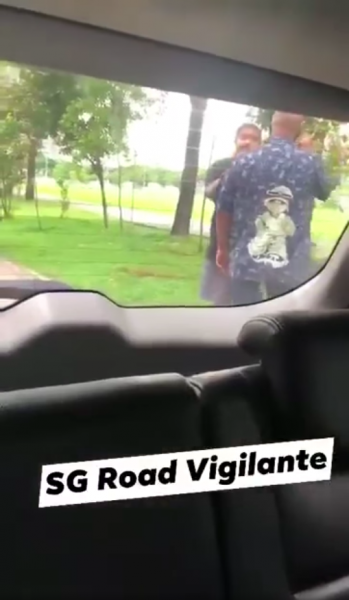 Just 5 seconds into the video, the cam car driver threw a punch at the other but missed.

To retaliate, the other man in a black t-shirt and who had likely stepped out of the Audi behind started throwing punches back.

The Audi driver then started shouting that he would sue the other for punching him.

Both parties also rained a torrent of expletives on each other.

2 women, presumably the drivers’ family members, also appeared in the frame at several points and can be heard arguing too.

Police arrive at the scene to break up the fight

Soon after, 2 uniformed police officers arrived at the scene while the men continued arguing. As soon as they begin to tussle, the officers stepped in to break them apart.

However, the Audi driver still had his arms in a punching position when an officer tried to calm him down. 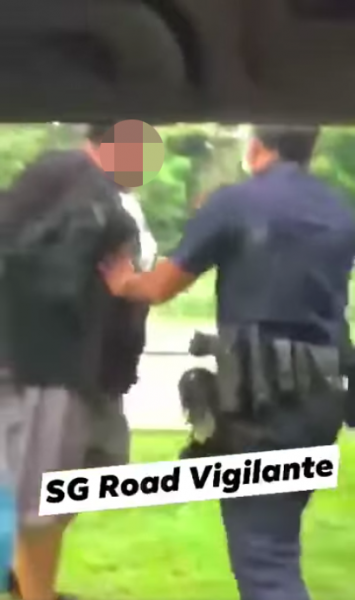 The volume of their shouts audibly waned after the cam car’s door was subsequently closed, making it hard to catch what the people outside the car were saying.

But things must have gotten quite heated as the women nearly got into a fistfight too. Thankfully, the police were there to stop them.

The rest of the video largely focused on the Audi driver who was explaining the situation to the policemen.

Though they hadn’t seemed to have arrived at a resolution yet, the video ended after the partner of the cam car driver took the phone away to stop the recording.

Whatever the argument was about, there was no need for the drivers to get aggressive.

To prevent injuries and legal issues, it is best to settle any argument peacefully rather than letting it turn physical.

We hope all parties were able to resolve any issues they had amicably so they can put this incident behind them.