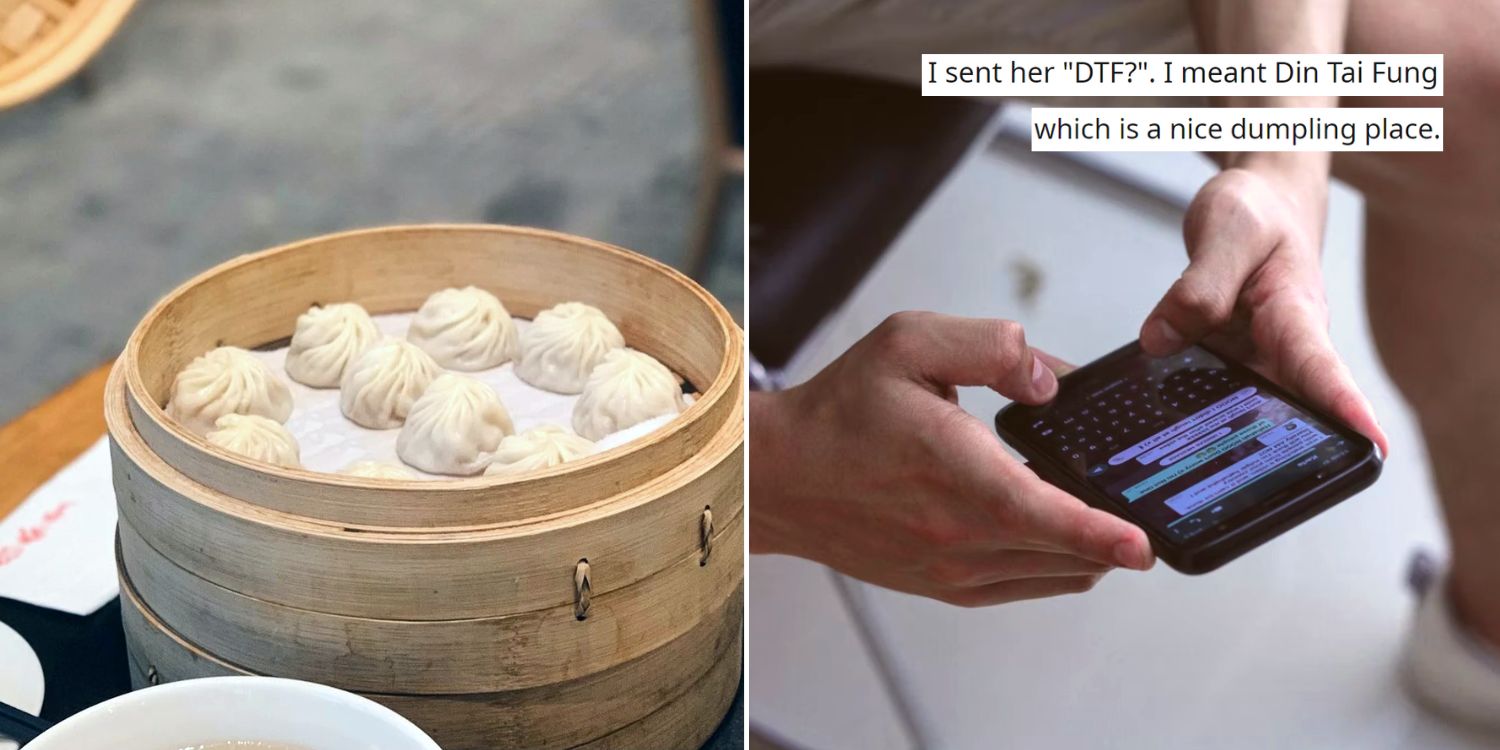 The woman and her friends thought he was making an indecent proposal.

Singaporeans love acronyms. From classics like MRT and GST to newer pandemic-related ones like ART and WFH, our country has no shortage of familiar three-letter terms.

We also use it to describe our favourite restaurants — how many times have we been jio-ed for HDL or SLF? However, those who don’t live here may not get the memo, as one guy found out the hard way.

Recently, Redditor u/NotFromYouTube shared a story about how an innocent remark on a woman’s Instagram Stories took a very unexpected and dramatic turn. 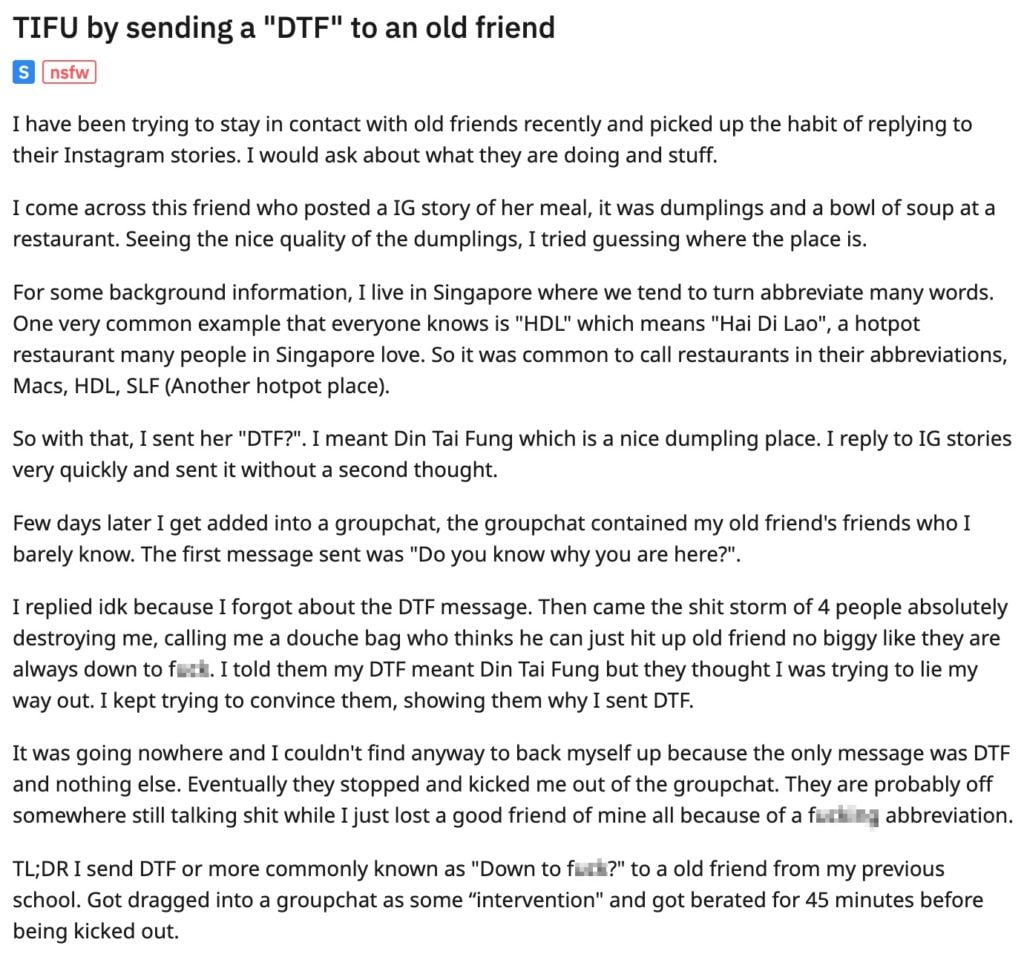 Somehow, commenting a simple “DTF?” on a friend’s Instagram Stories to ask if she was having Din Tai Fung ended with her friends accusing him of wanting to sleep with her.

As it turns out, they thought he meant “down to f***”, which is also commonly abbreviated the same way as the Taiwanese restaurant chain.

Last Friday (24 Jun), Reddit user u/NotFromYouTube posted a story on r/tifu about how a harmless comment landed him in hot water with a woman’s friends.

The subreddit name, which stands for “Today I F***ed Up”, is where people rant about how they caused things to go horribly wrong. And things certainly went horribly wrong for the poor OP, although most agree it wasn’t his fault.

According to OP, he’s been making an effort to stay in touch with old friends by leaving comments on their Instagram Stories.

One day, he saw a woman’s photo of her having dumplings and soup at a restaurant. 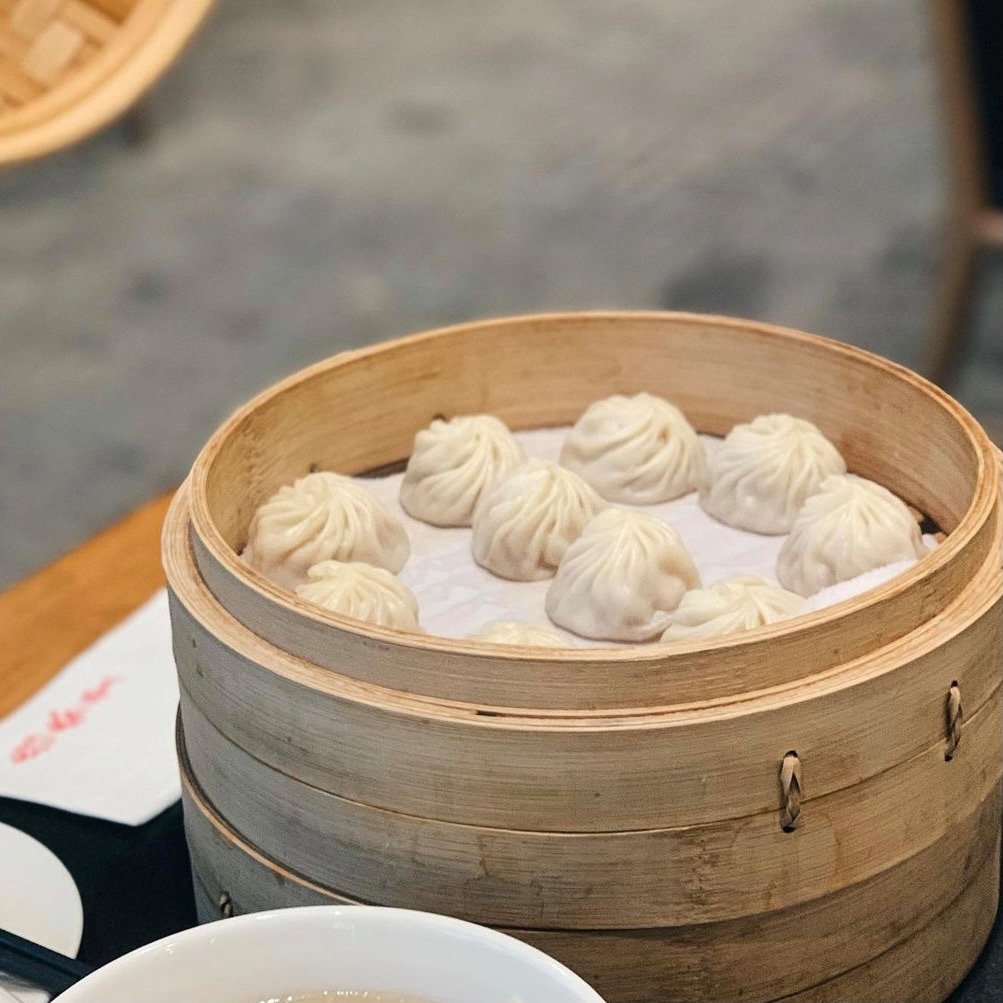 Thinking she might be at Din Tai Fung, OP commented, “DTF?”

He explained in his post that he’s from Singapore, where it’s common to refer to restaurants using abbreviations like Macs for McDonald’s and HDL for Haidilao.

However, his friend understood his remark as something else completely.

A few days after OP left the comment, he got added into a group chat consisting of the woman’s friends, whom he barely knows.

They chastised him for 45 minutes, calling him names and accusing him of thinking he could just hit up old friends and ask to sleep with them.

Despite his best efforts to convince them otherwise, the group didn’t believe OP and kicked him out of the chat, still fuming.

I [sent] DTF or more commonly known as “Down to f***?” to [an] old friend from my previous school. Got dragged into a [group chat] as some ‘intervention’ and got berated for 45 minutes before being kicked out.

Netizens are on OP’s side

When the post went up, most netizens sided with OP, saying that his friends were immature.

Many also made fun of how the friends created a whole group chat just to shame him, saying that it seemed like something only high schoolers would do.

As it turns out, OP and his friends really are just teenagers, which might explain the situation.

This user reassured OP that he’s better off cutting ties with this “child and her gang of children”.

The post was also shared on the Facebook group Subtle Asian Traits, where users defended OP as well.

The top-rated comment notes that it’s better for the OP to stay away from this “toxic group of people”.

“It would’ve been okay if they just called you out and asked you to be more careful,” she wrote.

But the way they handled this insignificant situation was just petty, immature, and honestly pathetic.

Hope they can resolve misunderstanding

On one hand, receiving indecent proposals is indeed a very annoying and inappropriate thing.

However, the woman and her friends could have made a better effort to listen to OP’s explanation instead of blindly making accusations.

Hopefully, they’ll all be able to resolve this misunderstanding somehow. It’s not worth ruining friendships over three letters, especially if they just stand for a restaurant.

Featured image adapted from Unsplash and Din Tai Fung Singapore on Facebook, for illustration purposes only.