The groom, who was recently diagnosed with lung cancer, said the wedding was to commemorate their 40 years together.

For some, a relationship can end right after the very first argument. But there are a few others who are lucky enough to enjoy a love that stands the test of time.

The latter was certainly true for one elderly couple in Singapore.

After spending 40 years together, they decided it was high time to cement their relationship by tying the knot. 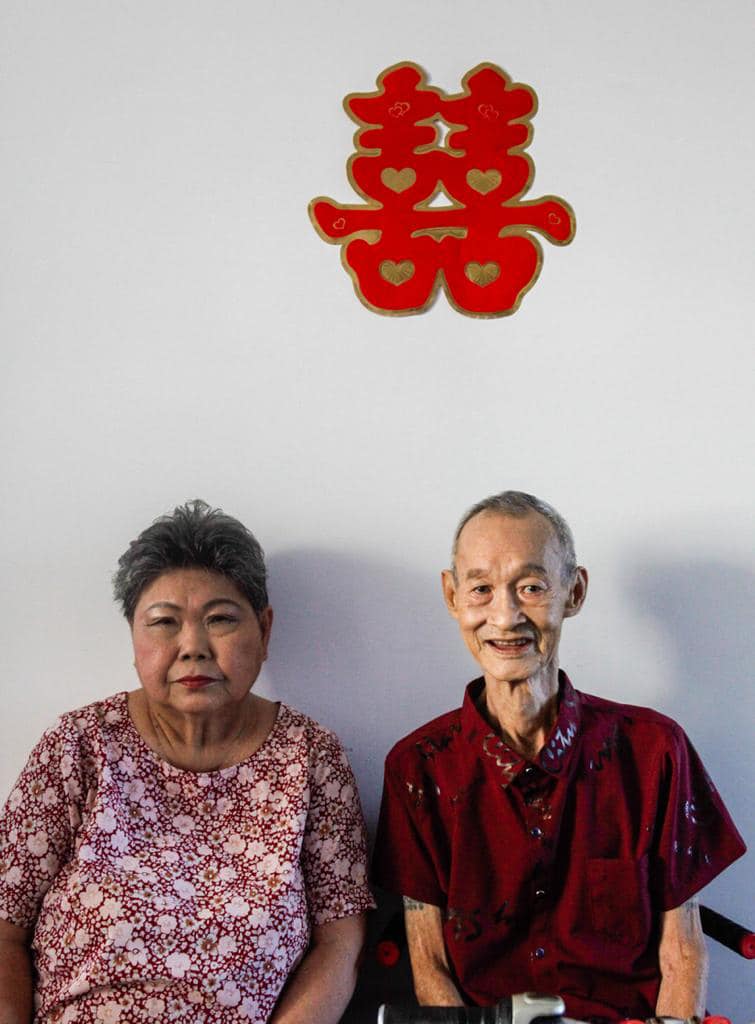 So, with the help of hospital volunteers, social workers, and their families, the two of them got married in an intimate ceremony at an HDB lift lobby.

Together for more than 40 years

76-year-old Wu Yongcheng and 70-year-old Wang Aijuan, aka Mr and Mrs Goh, have been together for more than 40 years since divorcing their respective ex-spouses.

According to Shin Min Daily News, the pair never intended to get married at first. However, this changed when Mr Goh was diagnosed with lung cancer in May this year.

In order to fulfil his wishes, the couple decided to tie the knot to avoid having any regrets. 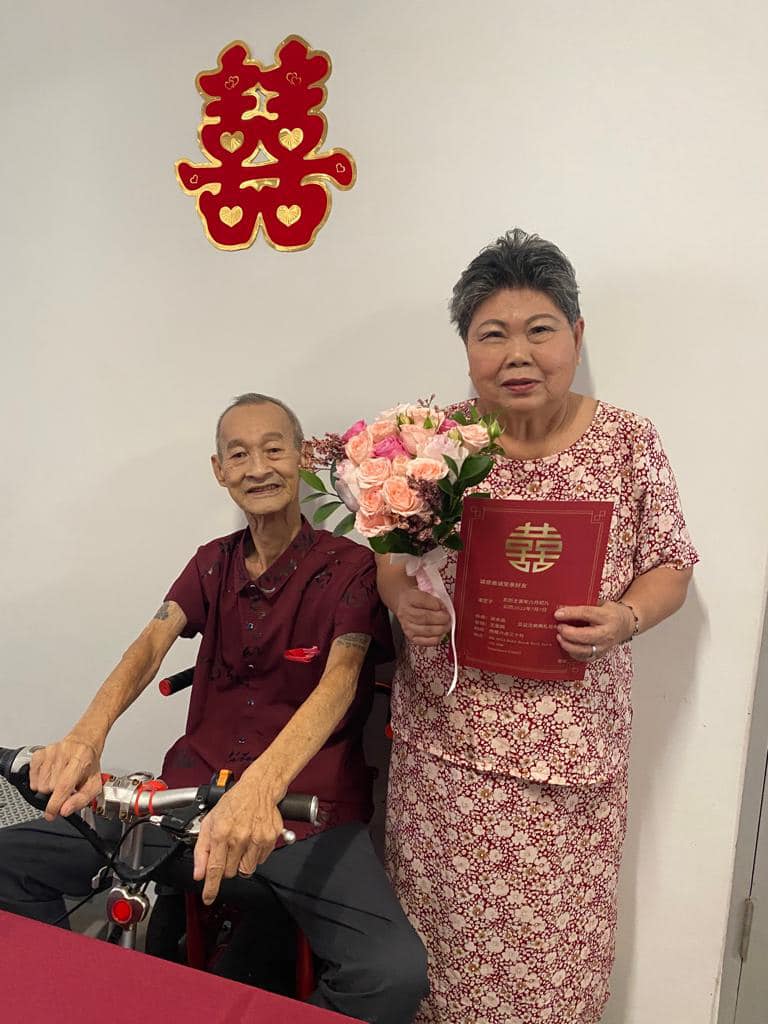 Speaking to Shin Min Daily News, Mrs Goh said that she met her husband as an employee of his wholesale fish ball and fish cake business.

The pair, both divorcees, eventually fell in love and moved in together. Mrs Goh explained that they were so busy living life day by day that they didn’t even think about getting married.

Instead, they agreed that as long as they were together, they would support each other.

Supported each other through tough times

Over the next four decades, Mr and Mrs Goh continued to work and live together.

They even spent 20 years in Cambodia, where they opened a Chinese restaurant. 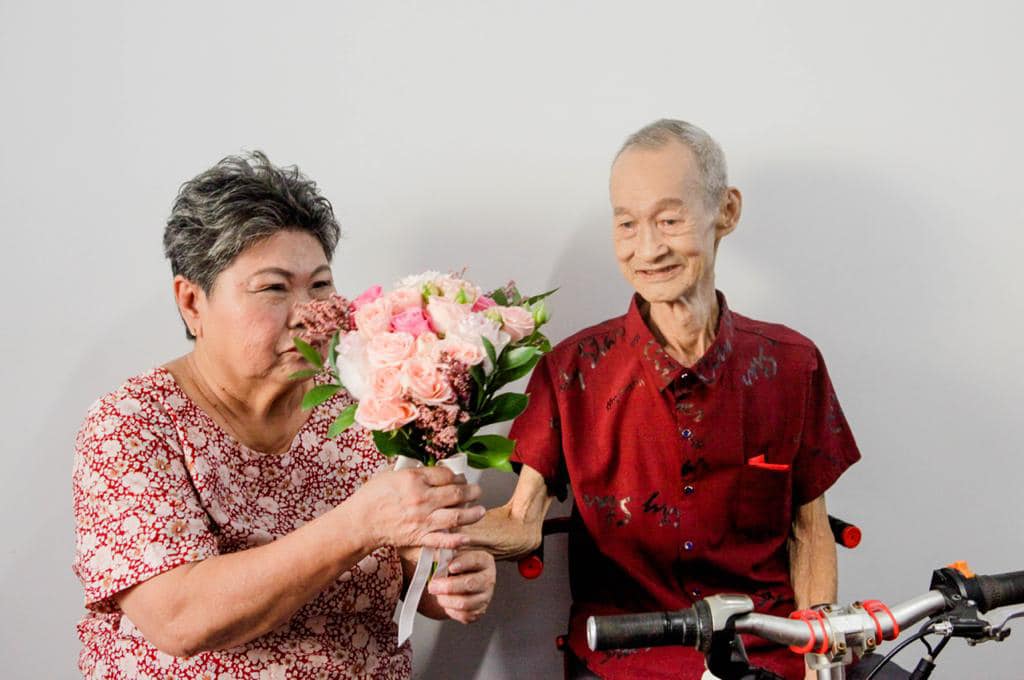 Mrs Goh admitted that she had followed Mr Goh to Cambodia despite her sister’s objection. She even pawned about S$20,000 worth of her jewellery to start their business.

Together, the couple opened the first Chinese restaurant in the country, selling fried noodles and other dishes. They also adopted their neighbour’s daughter after the mother passed away from an illness.

However, running a business in Cambodia was not easy. During peak travel seasons, they would be extremely busy, but no tourists also meant meagre earnings.

In addition, rising rental rates forced them to frequently shift their eatery around. Eventually, they shuttered the business due to the high costs.

After the closure, Mrs Goh continued to work in Cambodia for four years, earning less than S$150 a month.

The couple moved back to Singapore five or six years ago due to health issues. Mr Goh is currently waiting to undergo chemotherapy and radiation therapy for his lung cancer.

When asked if he had any wishes he’d like to fulfil, he said that he’d like to marry his wife to leave good memories for her.

Marriage is to commemorate the 40 years that we have been together.

Got married in HDB lift lobby

With the help of Ambulance Wish Singapore, a charity organisation that grants the wishes of terminally ill patients, Mr and Mrs Goh registered their marriage in a heartwarming ceremony on 7 Jul.

On 9 Jul, Ambulance Wish Singapore took to Facebook to share more details about the event, which took place in the lift lobby outside the couple’s apartment.

The intimate affair was attended by their children, daughters-in-law, grandchildren, and neighbours. Mr Goh’s nurses and medical social workers were also present. 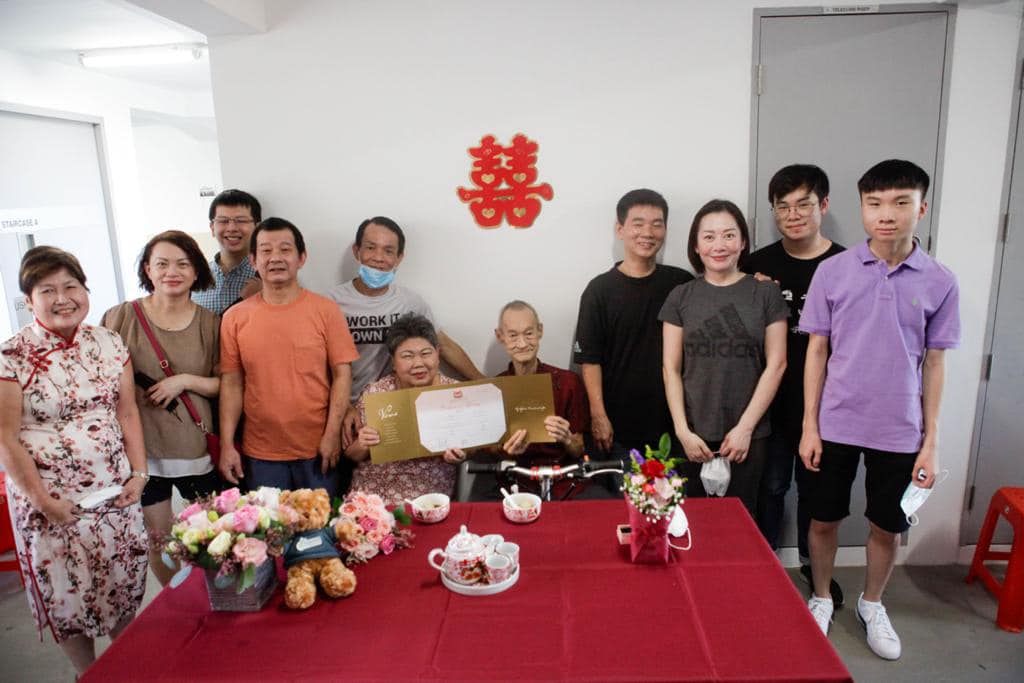 The organisation went all out to make the day as special and memorable as possible. Besides preparing red date longan tea, tangyuan, a wedding cake, and Mrs Goh’s favourite flowers, they also gifted the newlyweds with a pair of wedding bands engraved with their names.

Guests then settled down for dinner, which included Mr Goh’s favourite delicacies like braised pork buns and Hokkien mee. 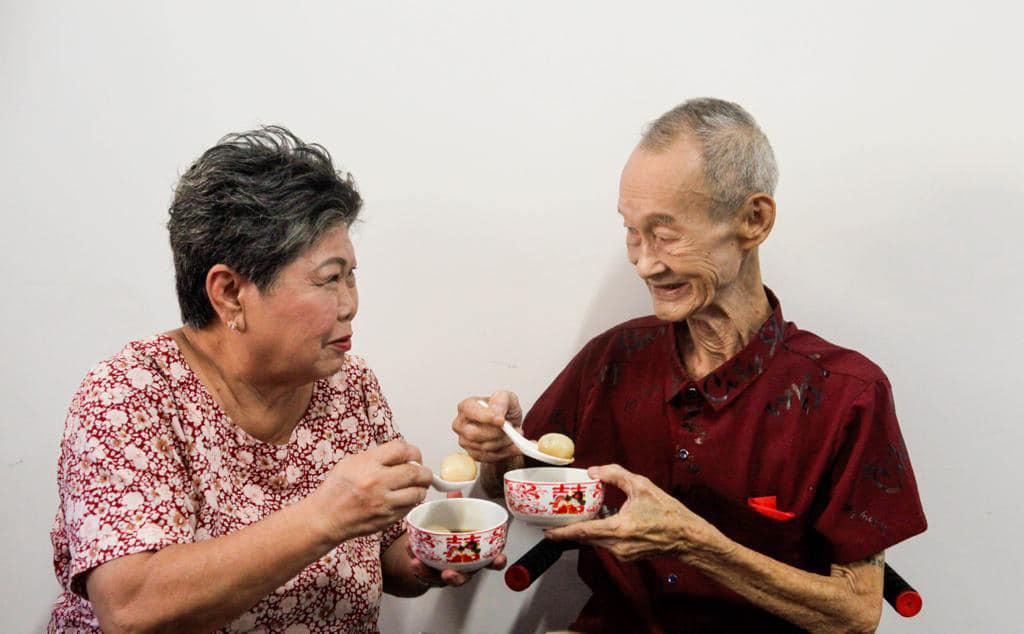 Ambulance Wish Singapore noted that while this was not exactly a typical ROM, it suited Mr and Mrs Goh perfectly.

Wishing the happy couple the best for their future

Not everyone may have the chance to meet their soulmate, much less get to spend so much of their life with them.

However, Mr and Mrs Goh have shown us that such a true and long-lasting love is possible, setting an example for the rest of us to admire.

We congratulate them on their marriage and wish them many happy days ahead.