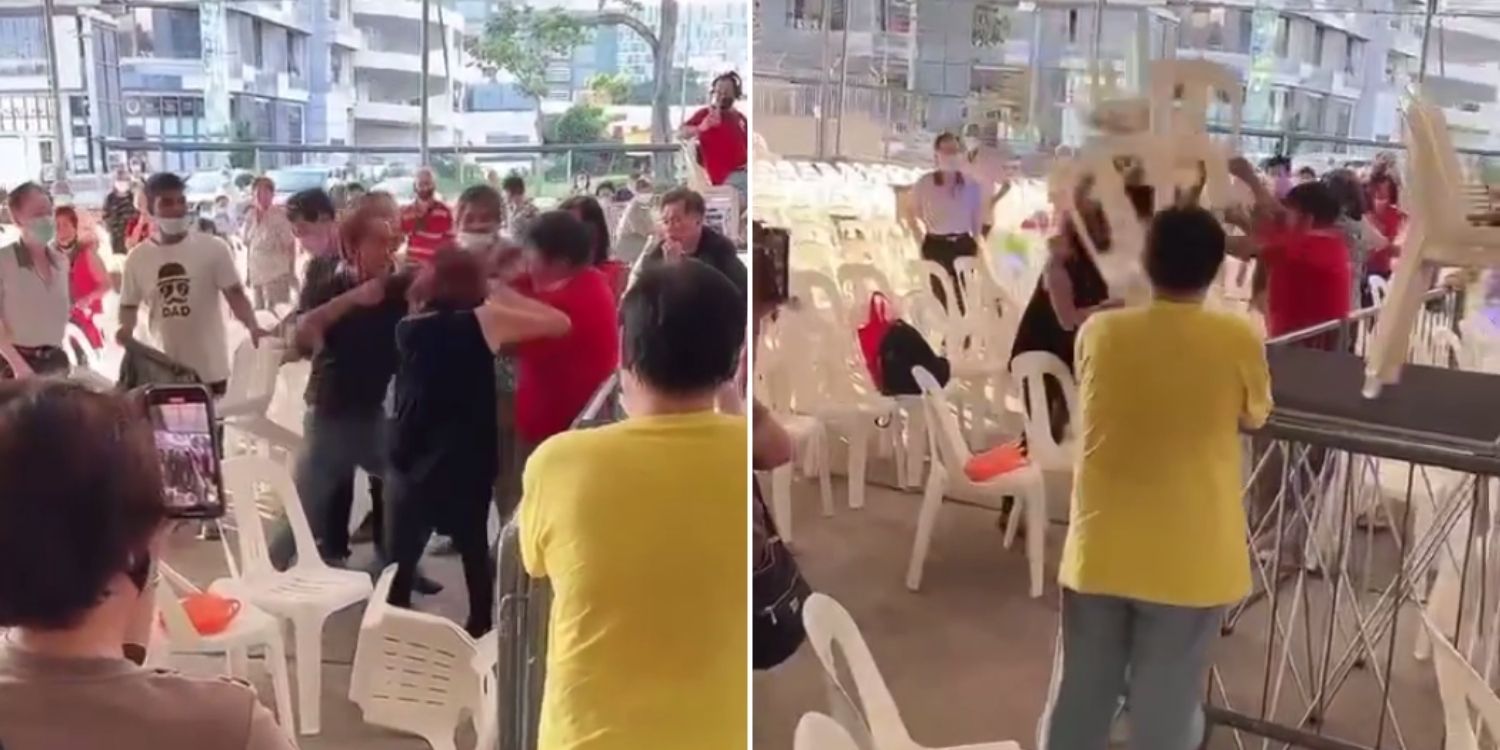 The brawl started after a couple allegedly took a seat that had already been 'choped'.

Verbal arguments can quickly turn into full-blown fights if nobody does anything to defuse the situation.

Recently, three elderly individuals had a physical altercation at a getai event in Ubi, with one woman ending up with a bloodied face.

The fight happened after a couple allegedly disposed of the woman’s snacks and drinks that she used to ‘chope’ a seat at the event.

Furious, the victim threw a plastic chair at the other woman and the brawl ensued.

Reports say that all three of them were eventually arrested by the police.

Channel NewsAsia (CNA) reports that the incident took place on Wednesday (10 Aug) along Arumugam Road in the Ubi area.

A video of the altercation also went viral on social media.

The recording starts by showing several people holding plastic chairs in front of them.

The victim, who is in a red shirt, then goes on the offensive and throws the chair at the other woman sitting just metres away from her.

As soon as the chair makes an impact, the man and his wife rush toward the woman in red and they all start hitting each other with chairs.

Bystanders quickly step in and successfully pull the chairs away. However, this frees up the trio’s hands and the couple starts punching the victim instead.

The man does not appear to pull his punches as he pummels the victim’s face.

At one point, he even lands an elbow swipe that seems to leave the victim dazed.

The victim cowers away from the blows but slowly straightens up again, with blood all over her face. 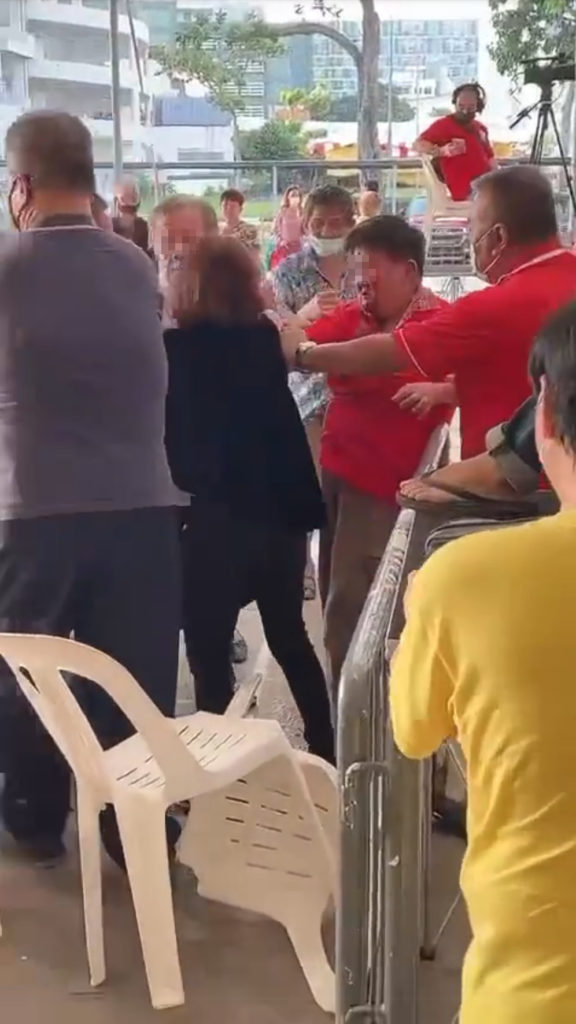 While onlookers manage to pull the man away, the victim grips tightly onto the other woman’s black shirt.

This violent ‘tug-of-war’ continues for a few more seconds before a bystander separates the pair.

The couple then walks off, with the husband holding his limping wife.

Speaking to Shin Min Daily News, the woman in red, 71, said that she had lined up two rows of chairs at the event at 11am that morning.

She is apparently known for helping people reserve seats at getai performances. While not everyone is happy with this, some audience members buy her food and drinks to express their thanks.

On the day of the fight, a friend had bought coffee and bread for her, which she put on a chair as a way to reserve the spot.

At about 5pm, the couple allegedly took over the reserved seat, even throwing away the items she had placed there. This is what sparked the brawl.

The 71-year-old woman was conveyed to a hospital while conscious. She told Shin Min Daily News that she needed to get stitches before going to the police station to make a statement.

She only returned home at 5am on Thursday (11 Aug).

Hope victim recovers from her injuries

While it can be frustrating to see someone steal your seat even after you’ve ‘choped’ it, there is absolutely no need to resort to such violence.

Still, even though she essentially started the fight, the victim didn’t deserve to get punched like that. It’s clear that the man’s excessive use of force was quite uncalled for.

We wish the victim a speedy recovery and hope that all of them have learned their lesson and will think twice if they ever feel the need to trade blows again.