We’re often told in school and at work that plagiarism is a serious offence. This applies more so if you take what is other people’s work and passes it off as your own.

A Singaporean-British chef whom you might recognise from Uncle Roger videos was accused of plagiarism in her cookbook, Makan.

The allegations surfaced after a Singaporean author, Sharon Wee, made a public post on 6 Oct. 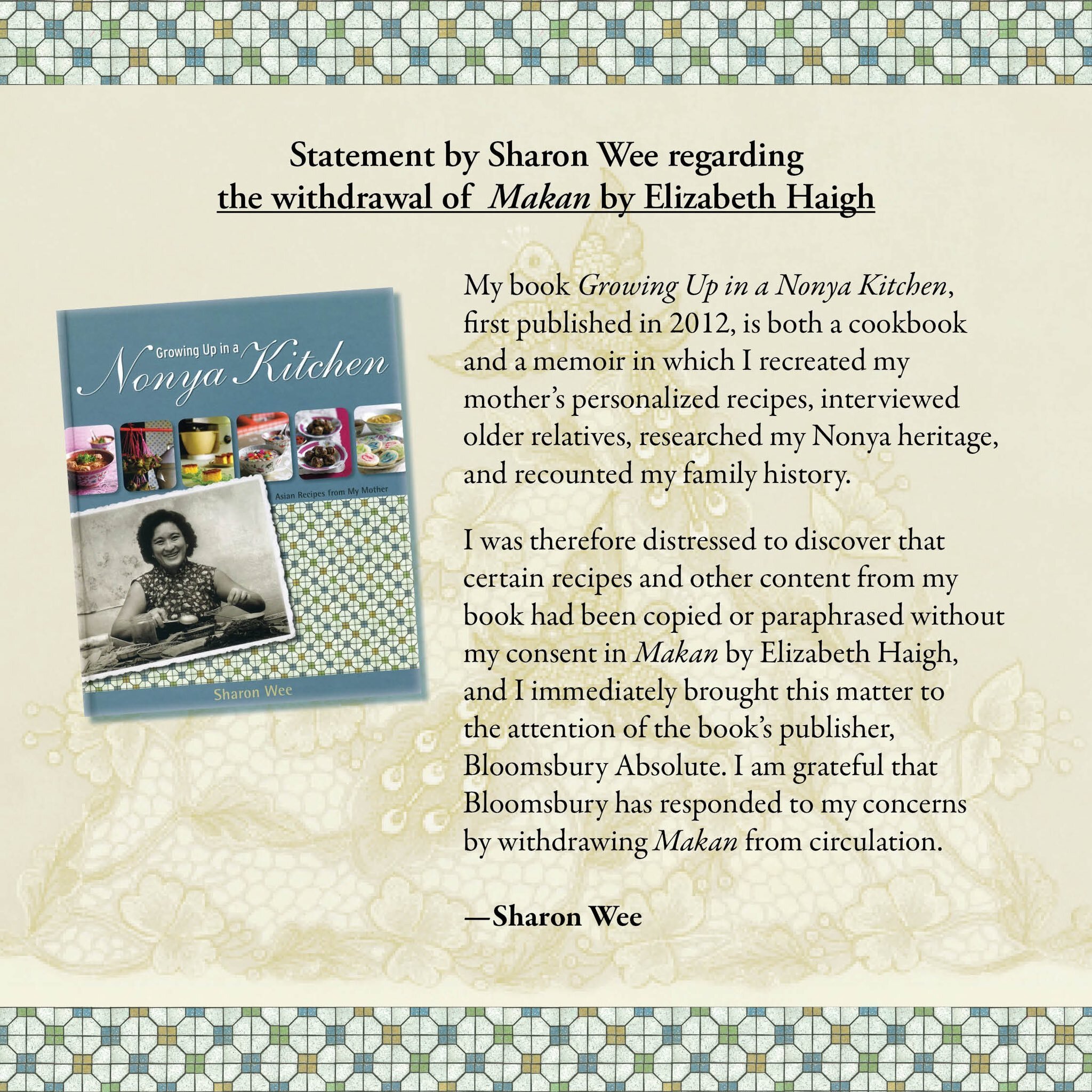 Including Ms Wee’s book, there are also other passages in Makan that people found allegedly lifted from other cookbooks and recipes online.

Bloomsbury, which was Elizabeth Haigh’s publisher, subsequently withdrew the cookbook from publication.

Haigh and Bloomsbury have not made a public statement regarding the allegations as of the time of writing.

Elizabeth Haigh is a Singapore-born London-based chef who’s previously received a Michelin star for her work and appeared on MasterChef in 2011.

She owns Mei Mei, a London restaurant that serves Singapore fare like chicken rice and nasi lemak, and makes frequent reference to her Singaporean heritage which she has through her mum.

Her cookbook, Makan, was released this year to what was initially great fanfare in the United Kingdom, and fellow chef Nigella Lawson even reviewed it. However, Ms Wee raised allegations that Haigh had copied entire passages from her 2012 book, Growing Up in a Nonya Kitchen.

Following the allegations, Nigella Lawson’s review of Makan is no longer on the website.

Poet Daryl Lim decided to investigate the allegations and found that Haigh had allegedly lifted even personal anecdotes, along with recipes.

Here’s one of them, a recipe for otak-otak. 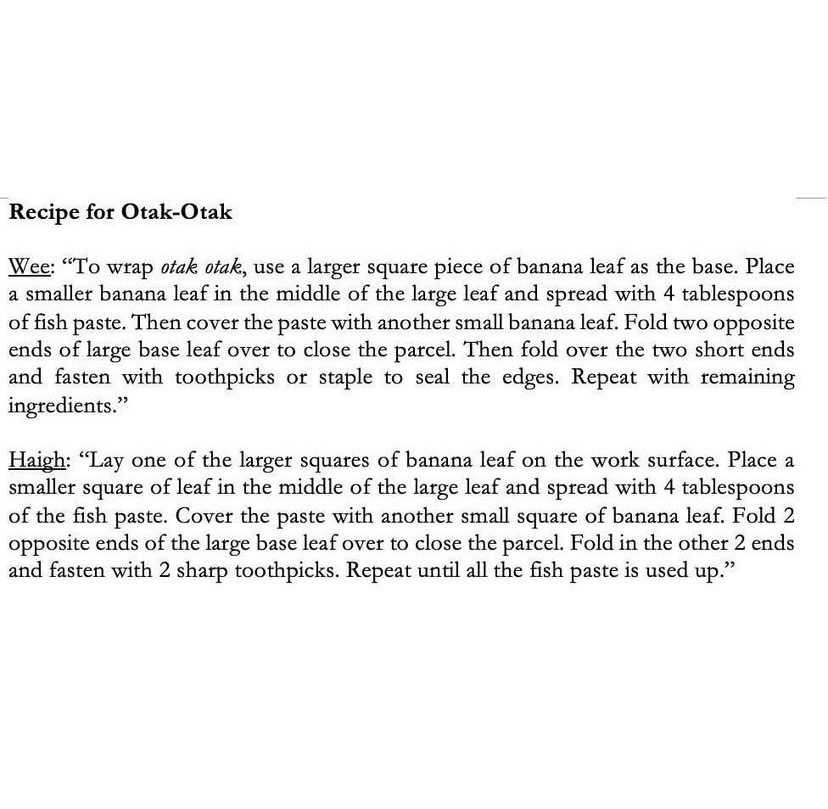 Cookbook allegedly plagiarises from other books

Following his post on 9 Oct, Mr Lim subsequently received even more parallels with Haigh’s book and other recipes elsewhere, including one from RasaMalaysia. Other passages also appear to be lifted — this one is from a book by Chris Ying in “You and I Eat the Same”: 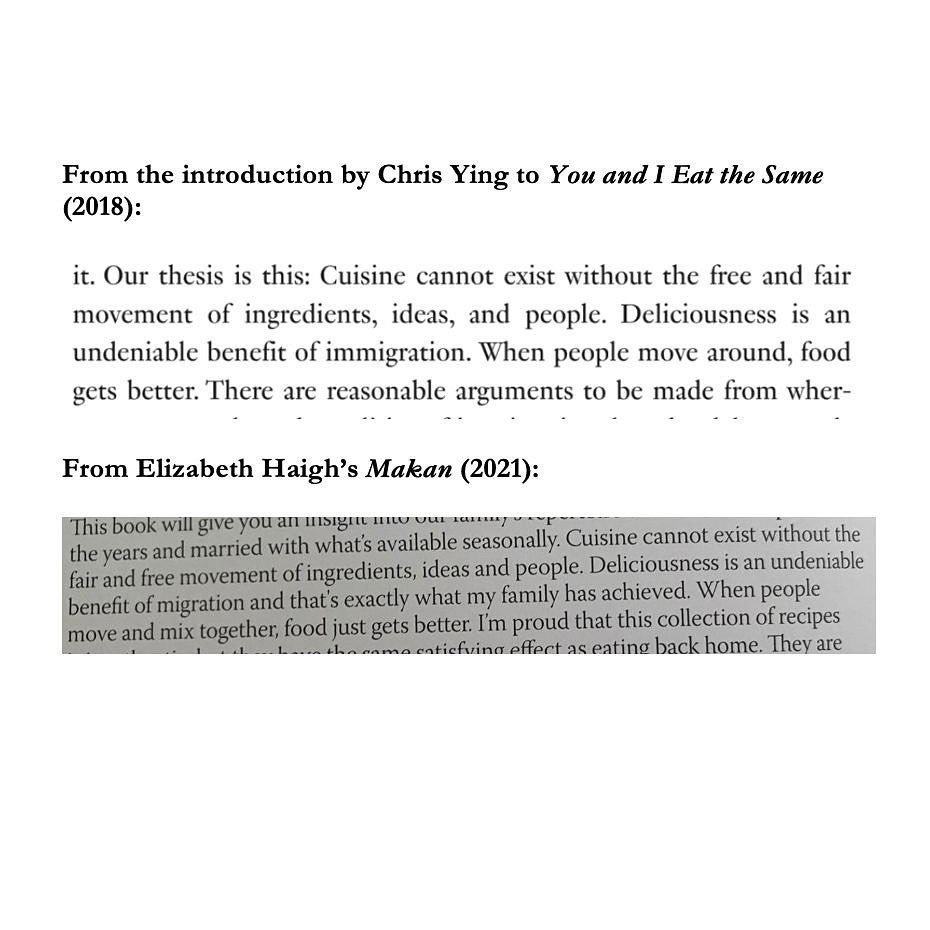 Reports of the alleged plagiarism were published by various British media sites including Daily Mail and The Guardian.

Prior to this, many hadn’t heard of the allegations outside of Singapore.

However, this doesn’t seem to have massively affected a recent video where Haigh appeared with UK-based Malaysian comedian Nigel Ng, perhaps better known as his persona Uncle Roger.

She is a frequent collaborator with Uncle Roger and is referred to as Auntie Liz in these videos.

Hope for statement on allegations from Elizabeth Haigh

Plagiarism of recipes may be a grey area as generally, recipes require some level of precision.

But the alleged plagiarism of personal memories appears damning. It must be distressing to those who’ve found their own recollections used by another author and passed off as their own.

Although Bloomsbury has pulled the book from shelves, we hope that both the publisher and author will make a statement regarding the allegations, be it to refute or acknowledge them.

Only then can the affected authors receive their due.