Foreign workers leave their families and homes behind to come to Singapore to work for a better life, so we wouldn’t blame them if our country is just a stopover for them.

But there are some who make the best of their time here, and extending a helping hand to people along the way is a good way to do that. As we celebrate “Everyday Heroes” who are at our doorstep, it’s also important that we also remember other heroes who have previously taken our country by storm.

It will go a long way towards proving that there are indeed many heroes among us, whether we notice them or not.

Here are some members of the new justice league in town:

Superman might have saved Ricky in the third Superman movie back in 1983, but it was Mr Subramanian Shanmuganathan and Mr Ponnan Muthukumar who saved Auni two years ago, a Singaporean toddler who was stuck between the rails of a clothes drying rack in Jurong East Street 32, Block 317.

When interviewed by Channel NewsAsia, both humbly claimed that they knew it was the right thing to do. Their heroic acts did not go unnoticed, as many applauded their selflessness on Facebook. These heroes may not have six packs, but they definitely formed a four pack when four of them worked together to save two people from a fire in their second-storey flat in Ang Mo Kio back in 2013, reported The Straits Times.

As the victims of the fire hung onto their balcony’s bamboo poles for dear life, these cleaners climbed a ladder and eventually brought the victims to safety, undeniably saving the day. Thank you, fantastic four!

Humans are not the only ones being saved here in Singapore, cats are too.

An unnamed Indian foreign worker (let’s call him Catman) risked severe injuries and his job when he bravely descended into a large drain to save a drowning cat  in 2014.

Catman overcame the slippery conditions and successfully rescued the frightened kitten, much to the relief and respect of bystanders. Watch the video below:

In Mr Karunanith Satish Kumar’s case, though, returning a lost mobile phone may appear to be a small gesture, but it surely was a big deal to phone owner Gary Koh. In an interview with Lianhe Wanbao last month, Mr Koh praised the 26-year-old Marina Bay Sands cleaner for going the extra mile to ensure the phone was returned.

He even managed to get a fan photo! 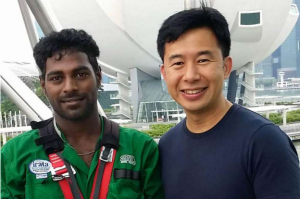 Not all heroes drive kick-ass cars. Truck driver Mr Gopal Venkateswaran stopped to help 49-year-old Mr Christopher Goh who punctured his tyre on the Central Expressway, coming to the rescue almost immediately. Read our story on the tyre-changing Good Samaritan.

Who needs shiny cars when you’ve got skills to save a damsel in distress? 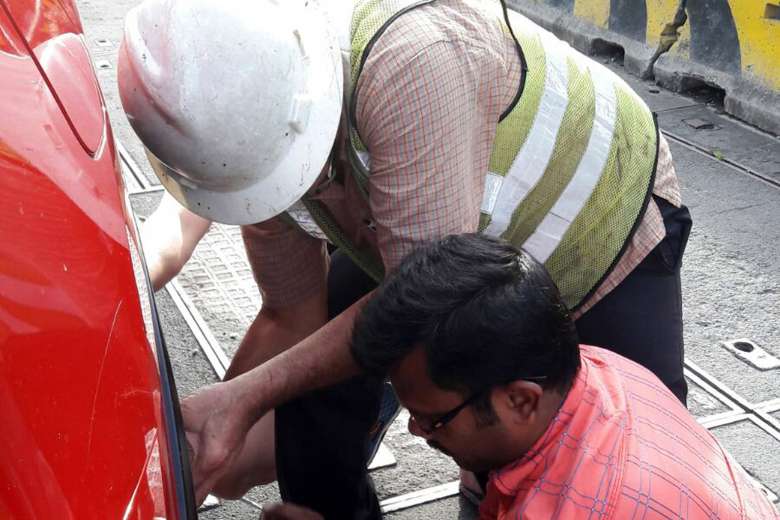 When we think of heroes, we think of courage. There is no exception, especially in the case of this unnamed worker we call “daredevil”, who climbed a ladder to help teenager Joseph Wong retrieve balloons that had flown up to the ceiling of the bus interchange. Read our story on the balloon-retrieving wonder.

Just look at that smile! This was the case for this selfless (unnamed) foreign worker who took the initiative to remove a fallen tree that was blocking the road, in order for cars to pass through. Even in the pouring rain, the foreign worker saw the needs of the drivers before his, and undoubtedly saved the day. It is only right that we applaud him for not only his strength, but his compassion.

See the video of what he did on SGAG’s Facebook page:

Even though the driver in the video did not show his outward appreciation, his fans are ever-so thankful. Thank you, Thor!

As much as we salute the actions of these heroes, we should also remember the wise words of this Facebook user.

Heroic deeds or not, all of them deserve our utmost respect and kindness, as they are responsible for building our infrastructure.

We all know that every superhero movie ends with a lesson learnt. In this case, no matter how trivial some of these gestures may seem, the hearts of these foreign workers shine brighter than any shield or sword.

As such, we should never forget that these workers are human just like the rest of us, and deserve appreciation for all they have contributed. Here’s to our heroes.