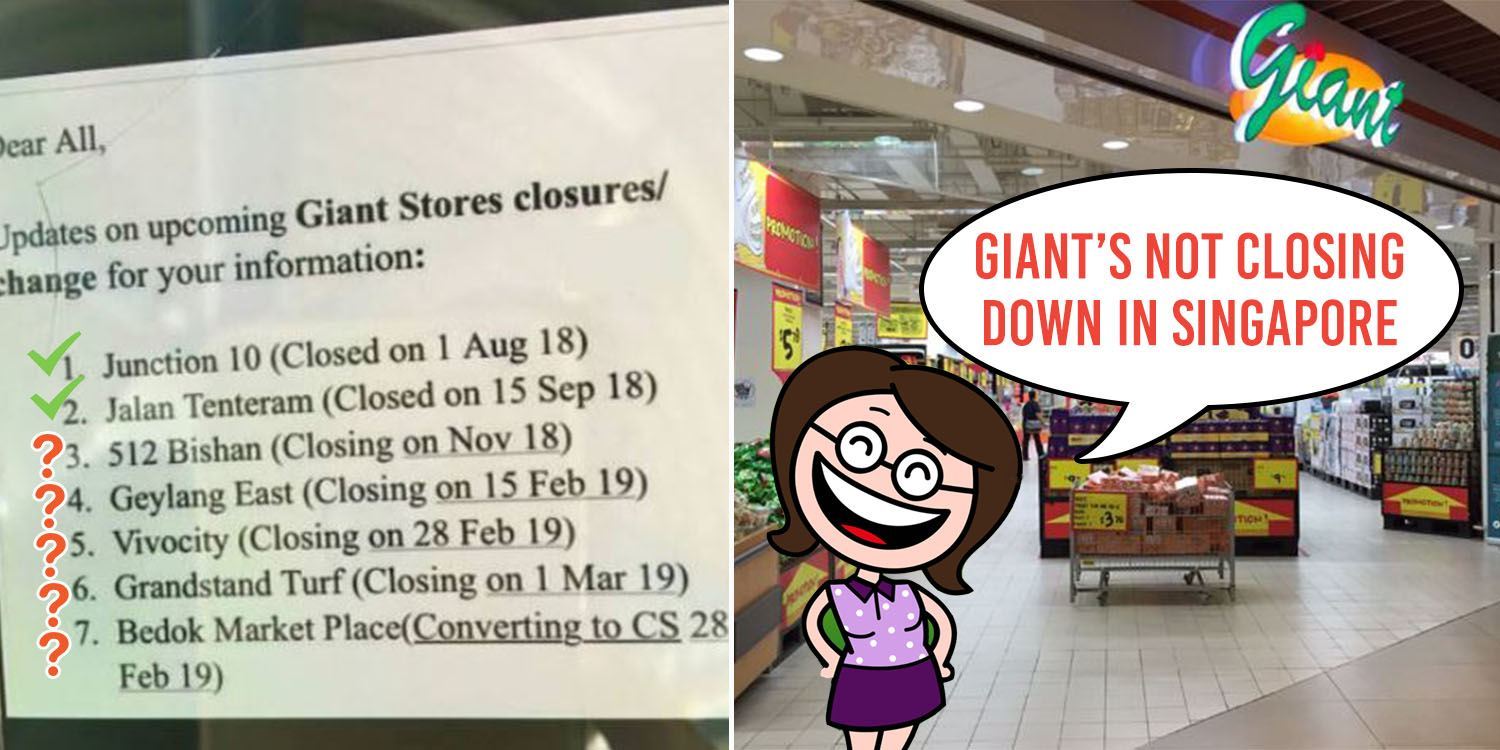 [UPDATE: 5PM] Giant has confirmed that the note was “not put up nor taken at any Giant store”. Giant adds that while the “first 2 (outlets) on the list are closed”, the other 5 stores are “still in operation”.

A bizarre picture making its rounds on WhatsApp & Facebook is touting the closure of 7 Giant hypermarkets in Singapore. 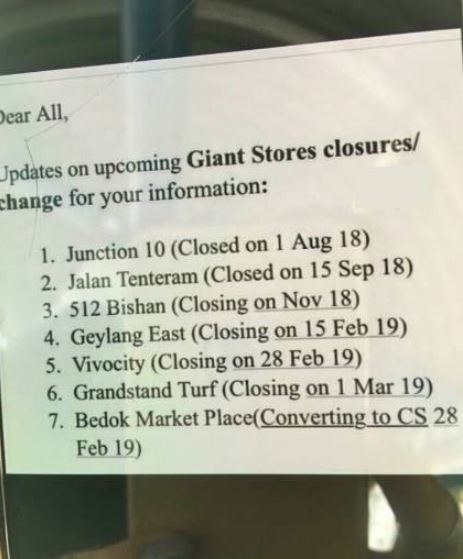 Understandably, the message made many locals hyperventilate, as it seemed like the grocery retail business was “shutting down for good” in these locations.

Netizens also speculated on the possibility that Giant Hypermarket was pulling out of Singapore altogether.

Turns out, it was all a misunderstanding of Giant proportions.

Are they closing down for good?

A printed note listing the store ‘closures’ appears to be stuck on a glass door in the photo.

We did a quick search on outlets that are supposedly already closed, like “Junction 10” and “Jalan Tenteram”.

The first 2 outlets are indeed “permanently closed” according to their Google listings. 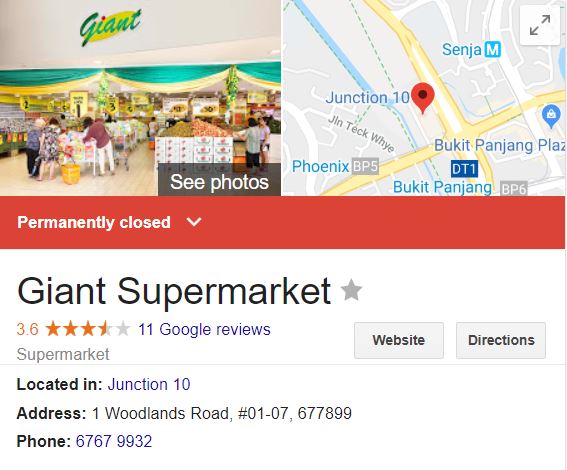 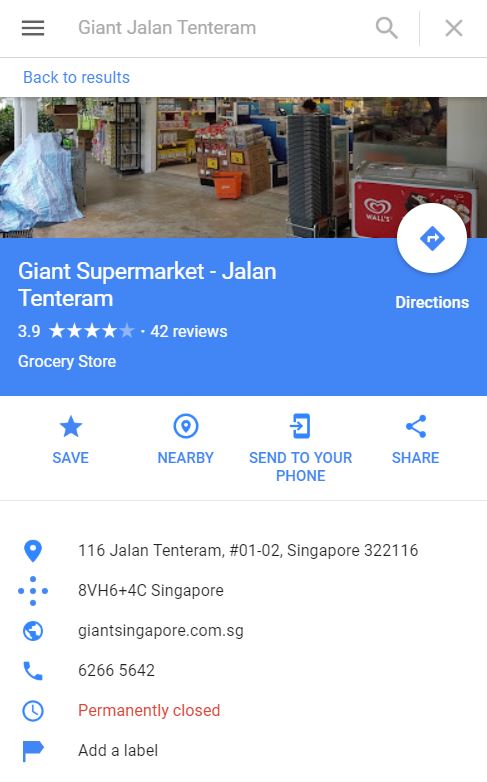 Giant has responded to the incident on Facebook via a not-so-specific post which denies that Giant is “closing down”. 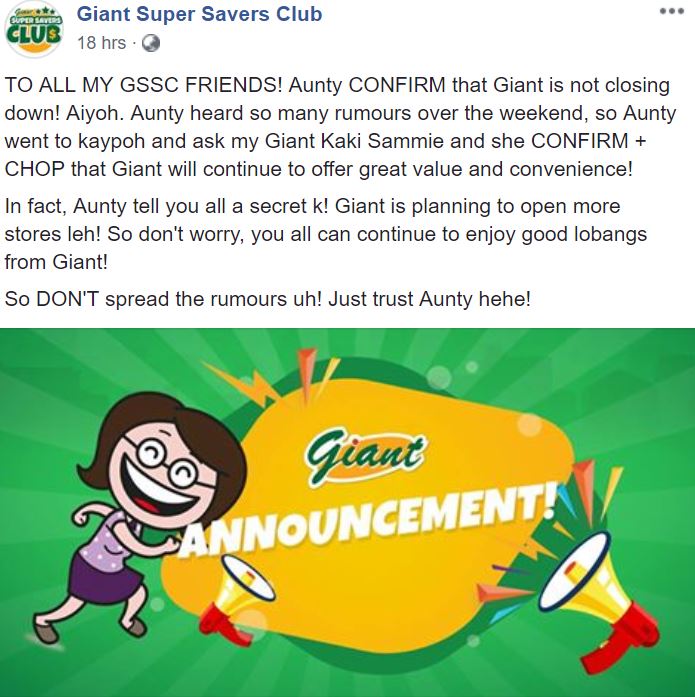 Written in colloquial language, Giant wrote that they “CONFIRM + CHOP” will continue to “offer great value and convenience”.

They also added that they’re planning to “open more stores”, requesting for people to stop “spread(ing) the rumours”.

However, they stopped short of clarifying whether there were any future plans to close any of the outlets listed in the post.

We’ve reached out to Giant Hypermarket Singapore for an official statement, and here’s what they said in full,

The note/picture is not put up nor taken at any Giant store. There are 60 Giant stores in Singapore – while the first 2 on the list are closed, the rest are still in operation.

As in any retail business, we regularly review our portfolio of existing stores as part of business rationalisation process to ensure we maximise business efficiencies. This includes closing and/or opening new stores depending on factors such as performance, lease renewals, site potential etc. Giant remains an important business format and we will continue to explore opportunities to expand its footprint.

Looks like that clears up the matter once and for all.

Like many Singaporeans, we’d be hard-pressed to find other grocery shopping alternatives if this notice turned out to be true.

However, it’s best to verify the authenticity of such messages before sharing them with our friends.

Giant may have been yet another victim of ‘fake news‘, just like this case involving ‘anti-smoking HDB cameras’.