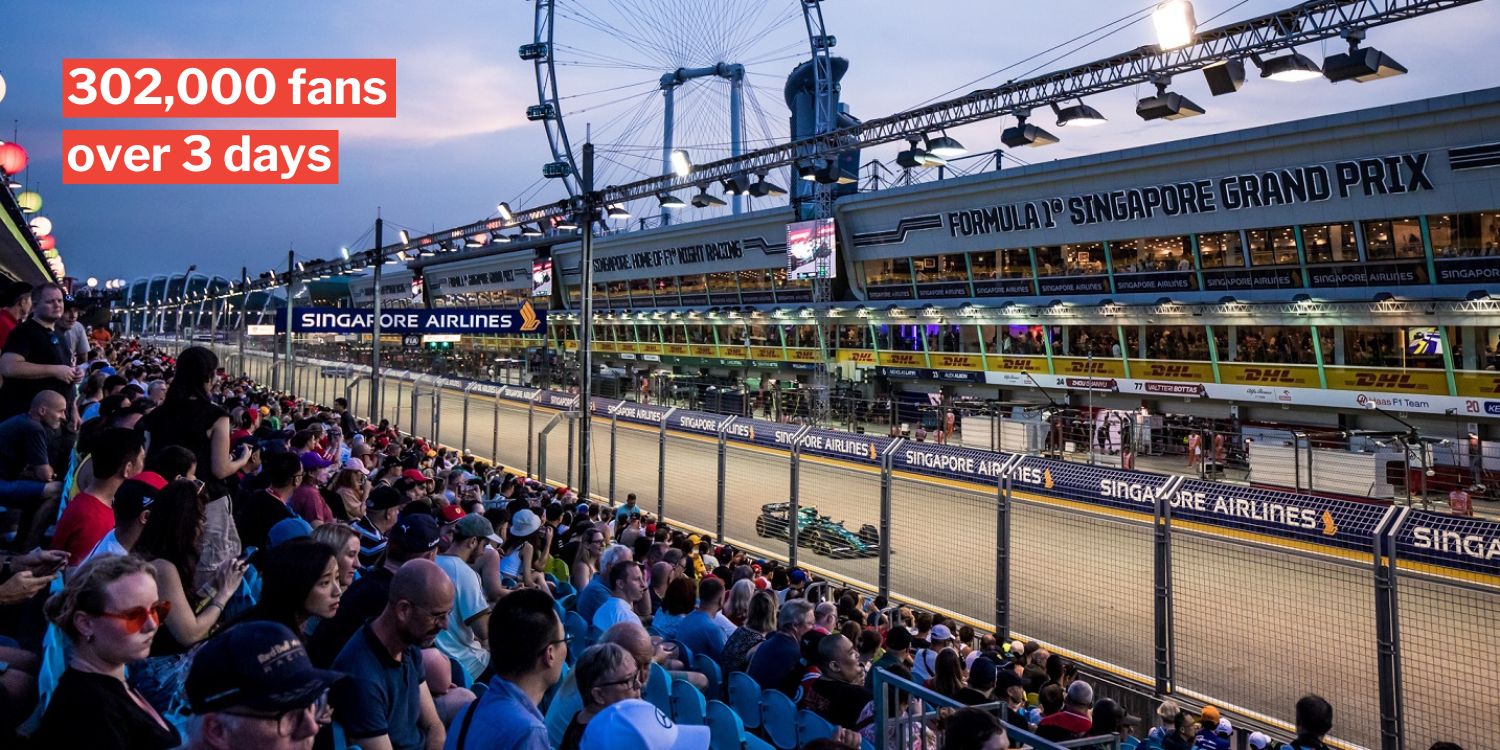 Even rainy weather failed to deter the crowds.

Singapore’s tourist industry got a much-needed shot in the arm when the F1 Singapore Grand Prix returned after a two-year hiatus.

And just to illustrate how popular the night race is, the 2022 edition has just set a record for its highest attendance in 13 years. 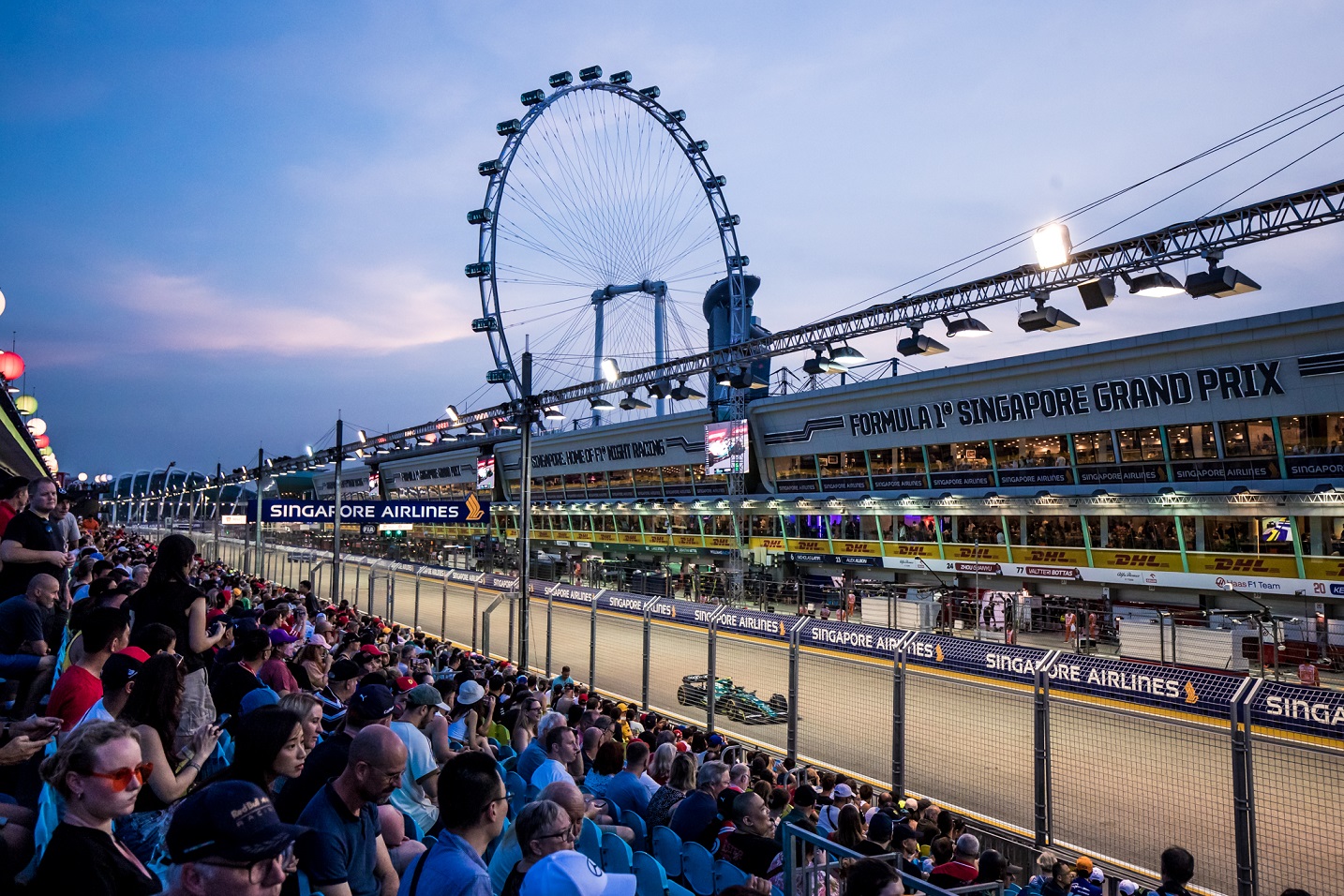 In keeping with the event’s popularity, all tickets are also sold out.

The happy milestone was announced by Singapore Grand Prix in a Facebook post on Sunday (2 Oct), the last day of the event.

They said the total number of people entering the attending over three days was a whopping 302,000. 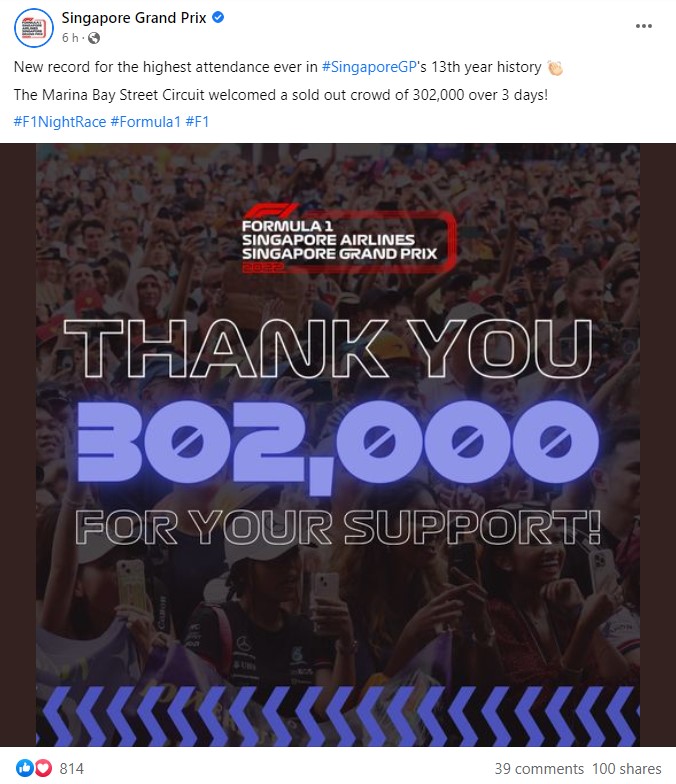 That’s the largest crowd ever since the Grand Prix started in Singapore in 2008.

Coming in second in terms of attendance was the very first edition in 2008, which saw 300,000 people throng the Marina Bay Street Circuit, according to Channel NewsAsia (CNA).

That edition was also the first time ever that a night race was included in the F1 calendar.

Tickets sold out for 2022 event

Earlier on Sunday, the Singapore Grand Prix informed the public that all tickets for the event were sold out — a testimony to its popularity. 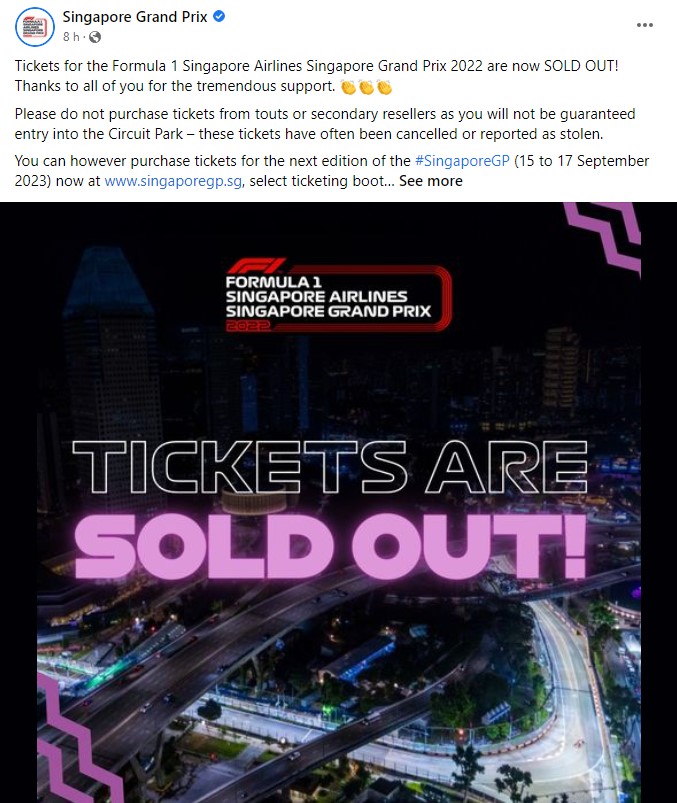 It’s also a sign of how many people had missed the event after two years of suspension.

Transport Minister S. Iswaran was quoted by CNA as saying that the success of the F1 this year was “a very good sign”.

It means things are recovering in Singapore, and there’s still keen interest in the race, he added.

He also revealed that about half of the attendees are from abroad, while the other half are local.

2022 edition is a rainy affair

Besides watching the races, many attendees would’ve come to enjoy the concerts.

However, heavy rain over the weekend meant that this was a muddy affair, resulting in ruined footwear for many.

The race itself also started late due to the downpour, flagging off after the formation lap at 9.05pm. 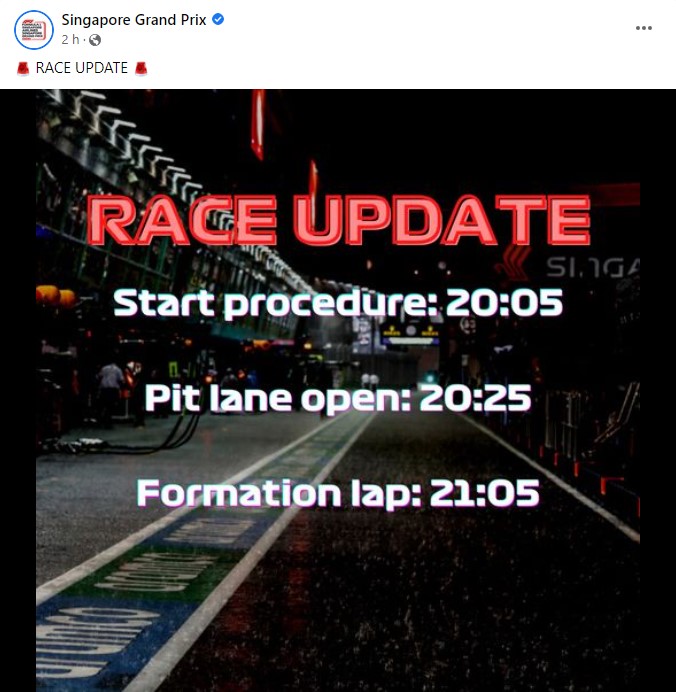 The flag off was initially supposed to be at 8pm.

However, the rain was still heavy at 7 plus, causing organisers to delay the start procedure. 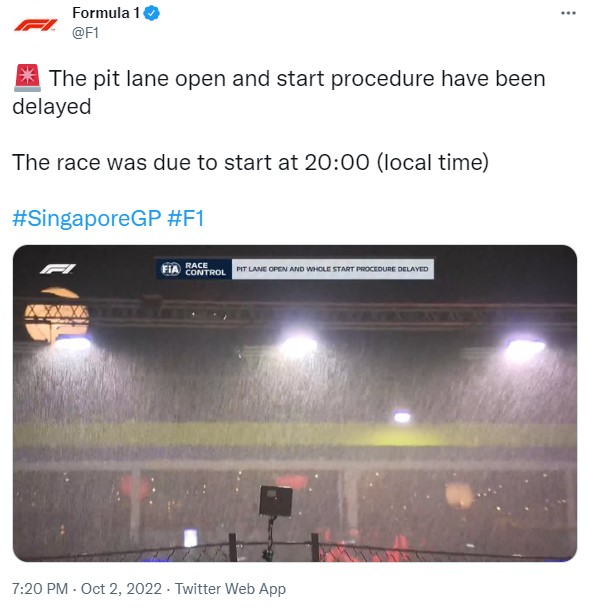 While spectators may have been frustrated, we’re sure they still stuck around till 9.05pm when the race finally began. 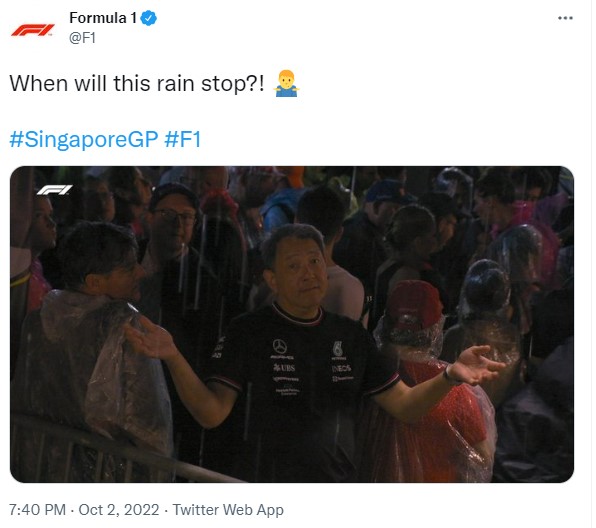 On Saturday (1 Oct), the second day of the event, heavy rain also fell in the afternoon and evening. 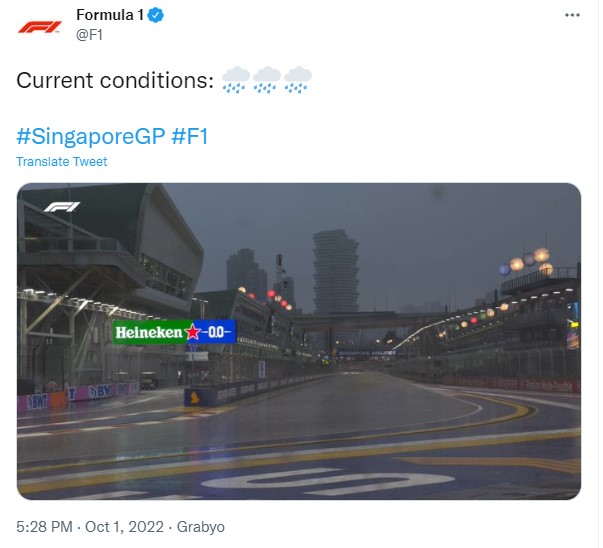 This resulted in teams having to compete in the qualifying session on a wet track, increasing the difficulty for racers. 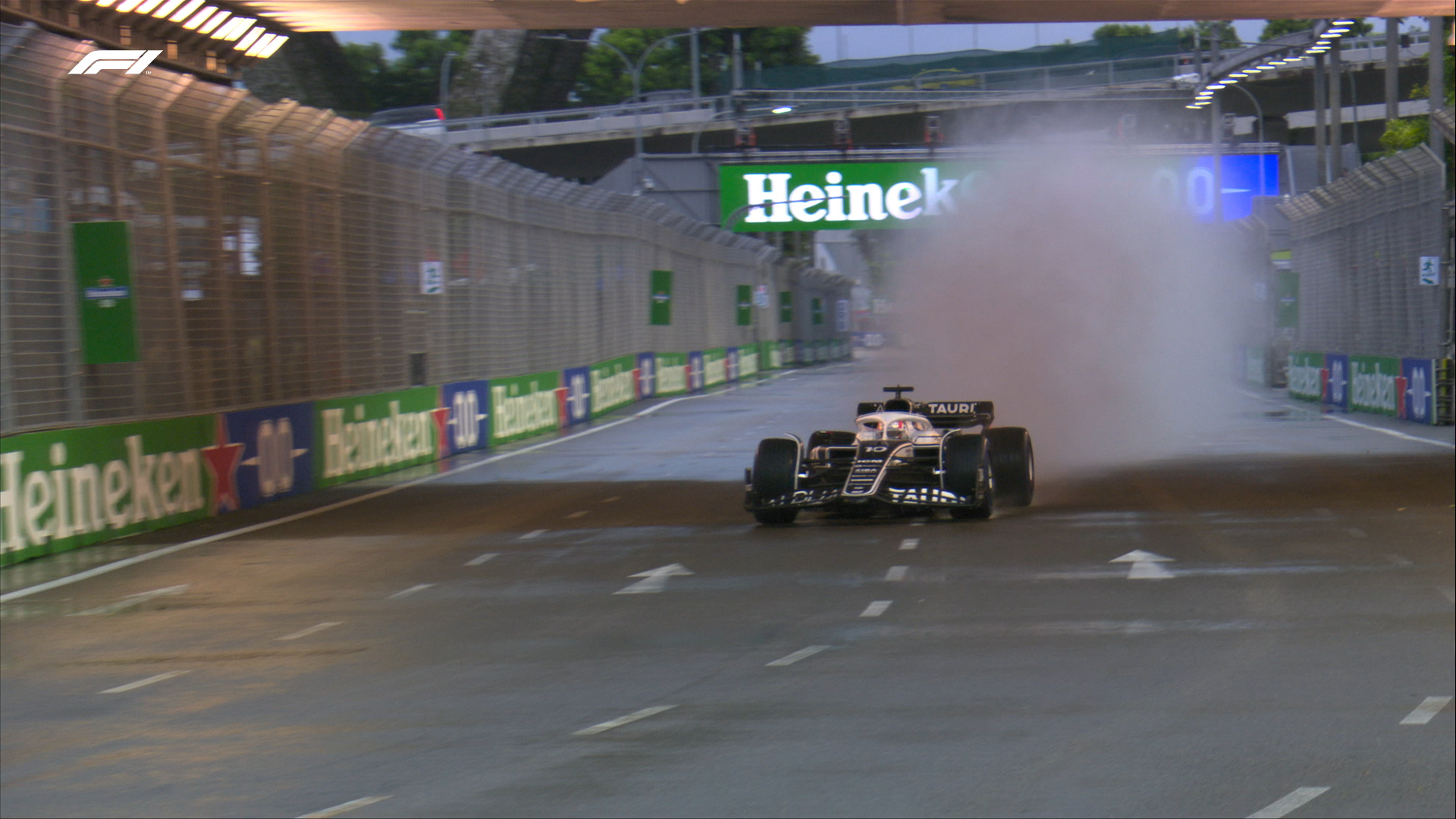 Highest attendance for Grand Prix is a good thing

While not everybody decided to get a ticket to watch the race, the fact that the 2022 Singapore Grand Prix scored a record anyway can only be a good thing.

It means that our tourist industry can finally get back on its feet after being in the doldrums for what seemed like forever.

Congrats to the organisers and everybody who made this year’s event such a success.

As the race has been renewed for another seven years, we’ll be looking forward to greater heights in the coming years.