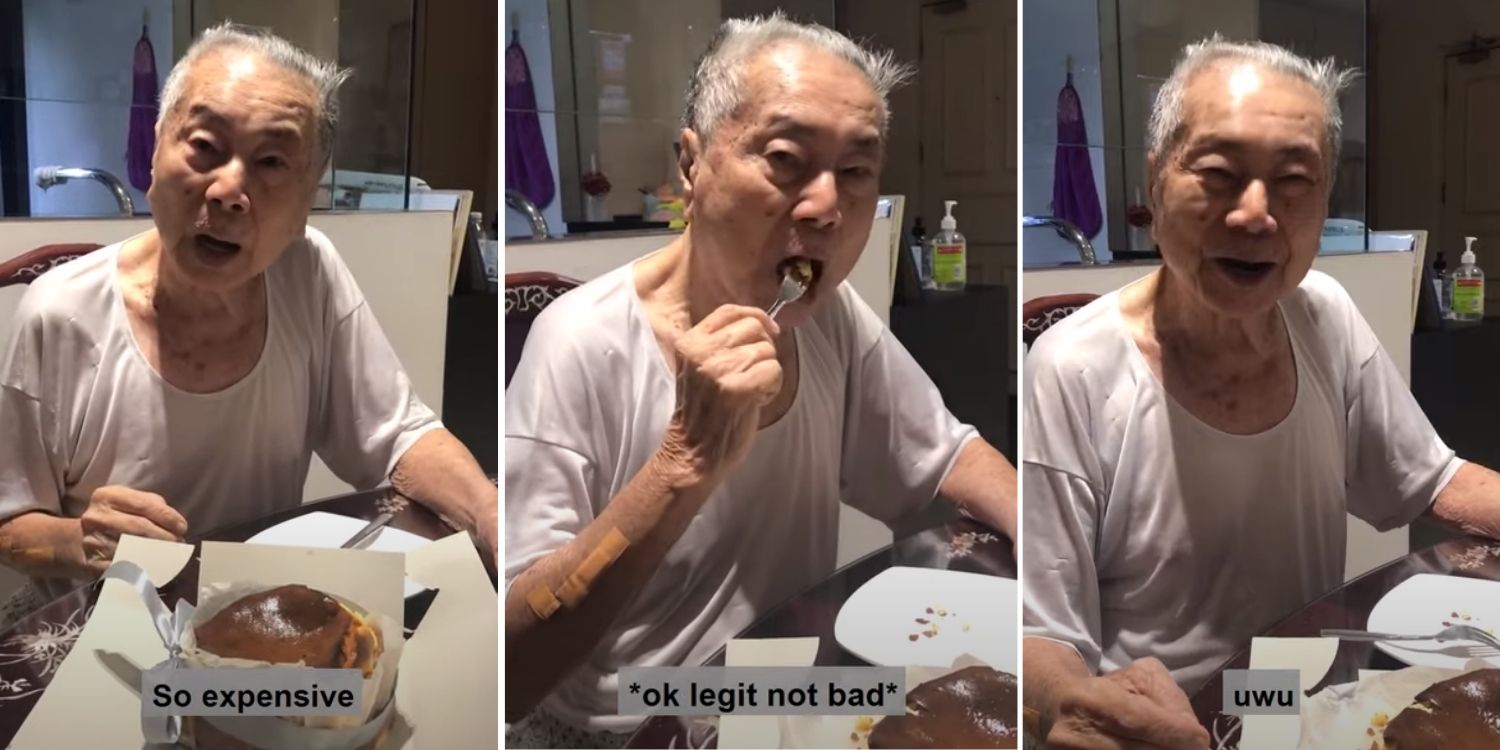 The viral grandpa who took the Internet by storm for his cute reaction to the Dalgona coffee trend has made a comeback.

His grandson encouraged him to give his verdict on the Basque burnt cheesecake, which finally earned his seal of approval.

You can watch the full video below.

His adorable reactions to the Basque burnt cheesecake moved so many people who were also reminded of their beloved ah gong.

The video begins with the grandson encouraging his ah gong to try the burnt cheesecake. However, the grandpa seems confused because he doesn’t want his grandson splurging money on a cake he didn’t ask for, but the grandson clarifies it was a gift from a friend. 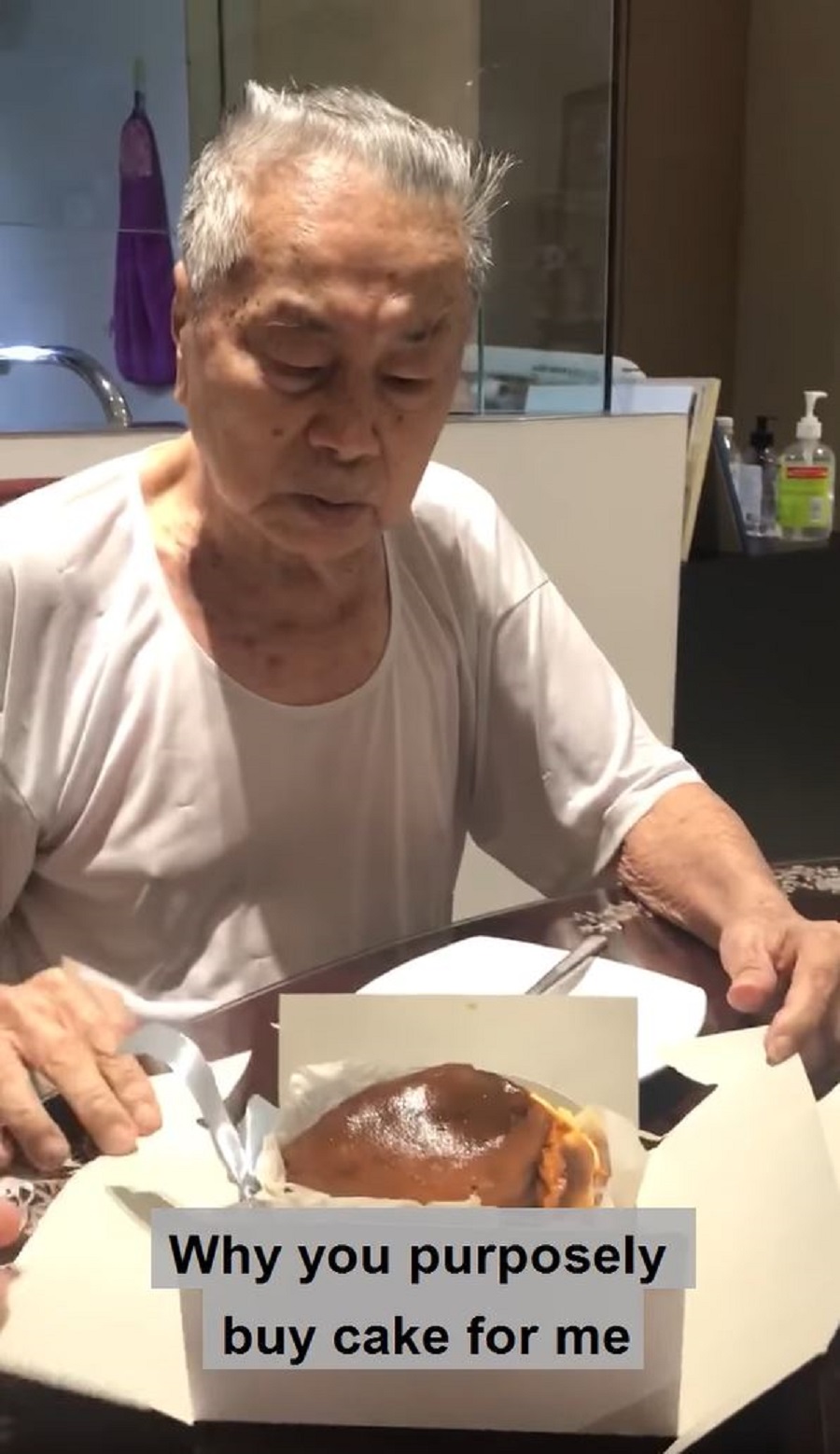 Latest food trends like Dalgona coffee and burnt cheesecake come with a hefty price tag so older folks are often flabbergasted by the price, and the same is true for this grandpa.

When his grandson asks him to guess the price, he first guesses $5 and then $8. 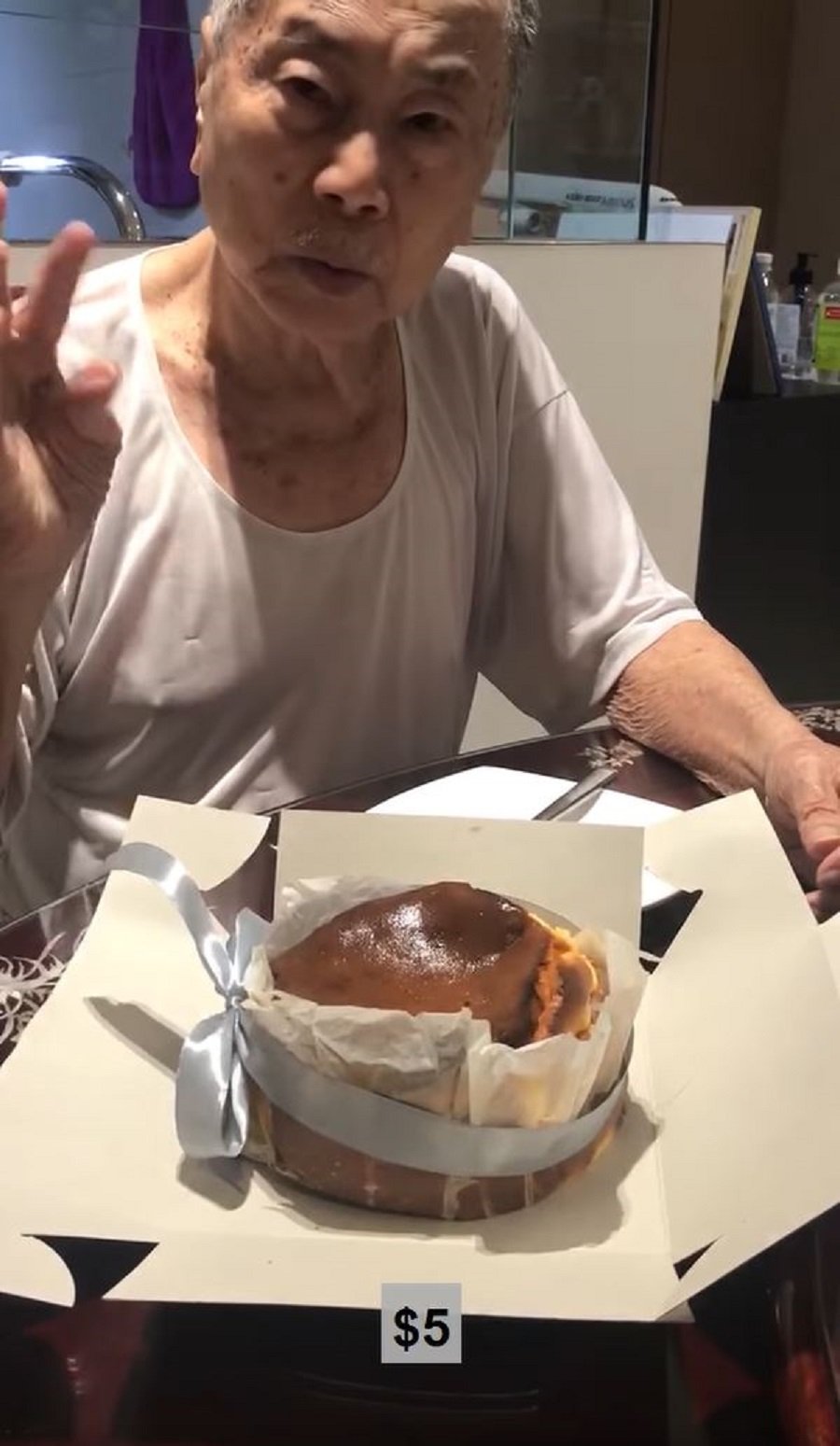 Upon learning about the real price, he is dumbstruck and replies in Teochew, 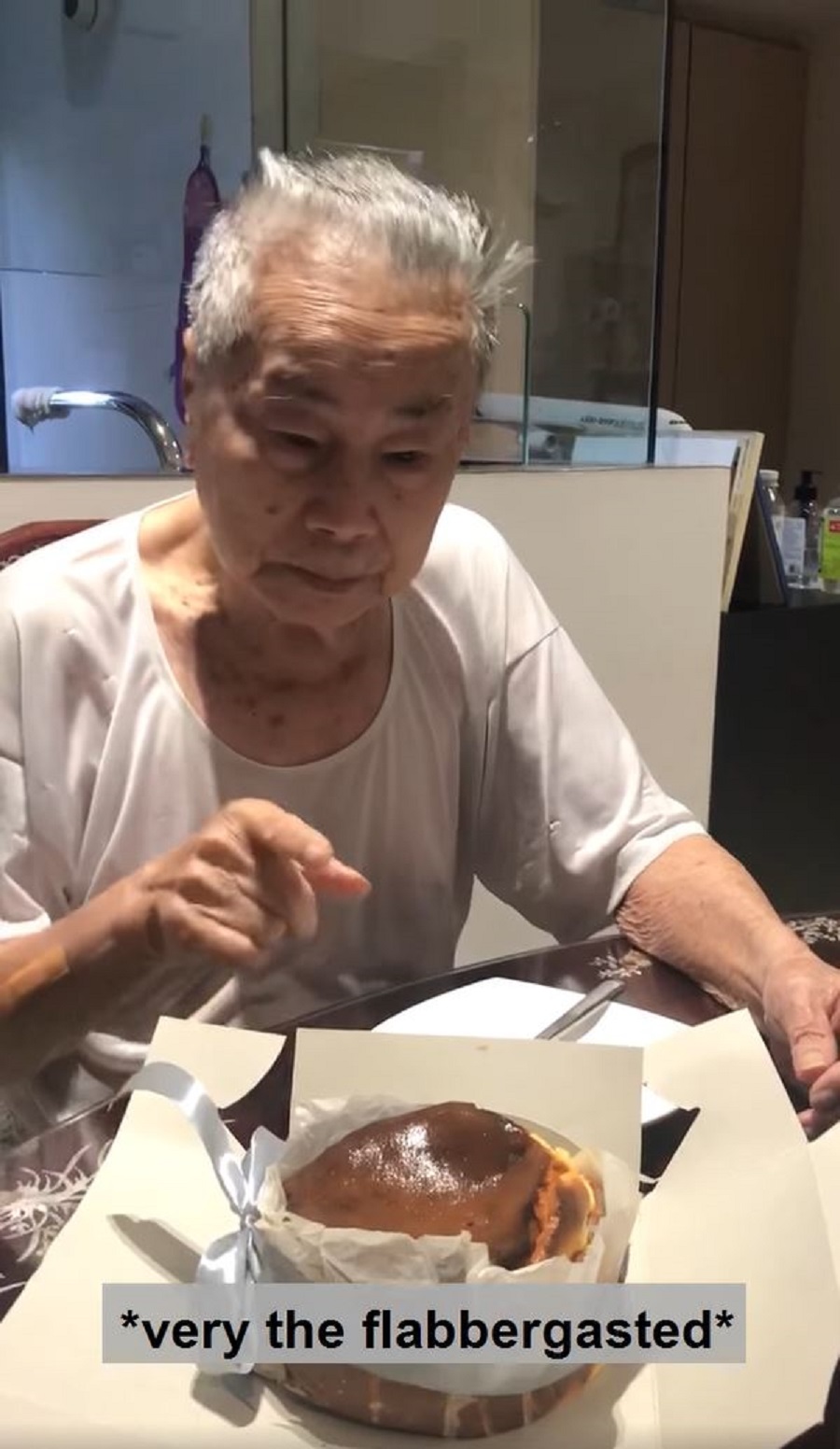 Similar to most grandparents, this grandpa prefers traditional fare, so it’s quite a challenge for his grandson to explain the viral food trend. 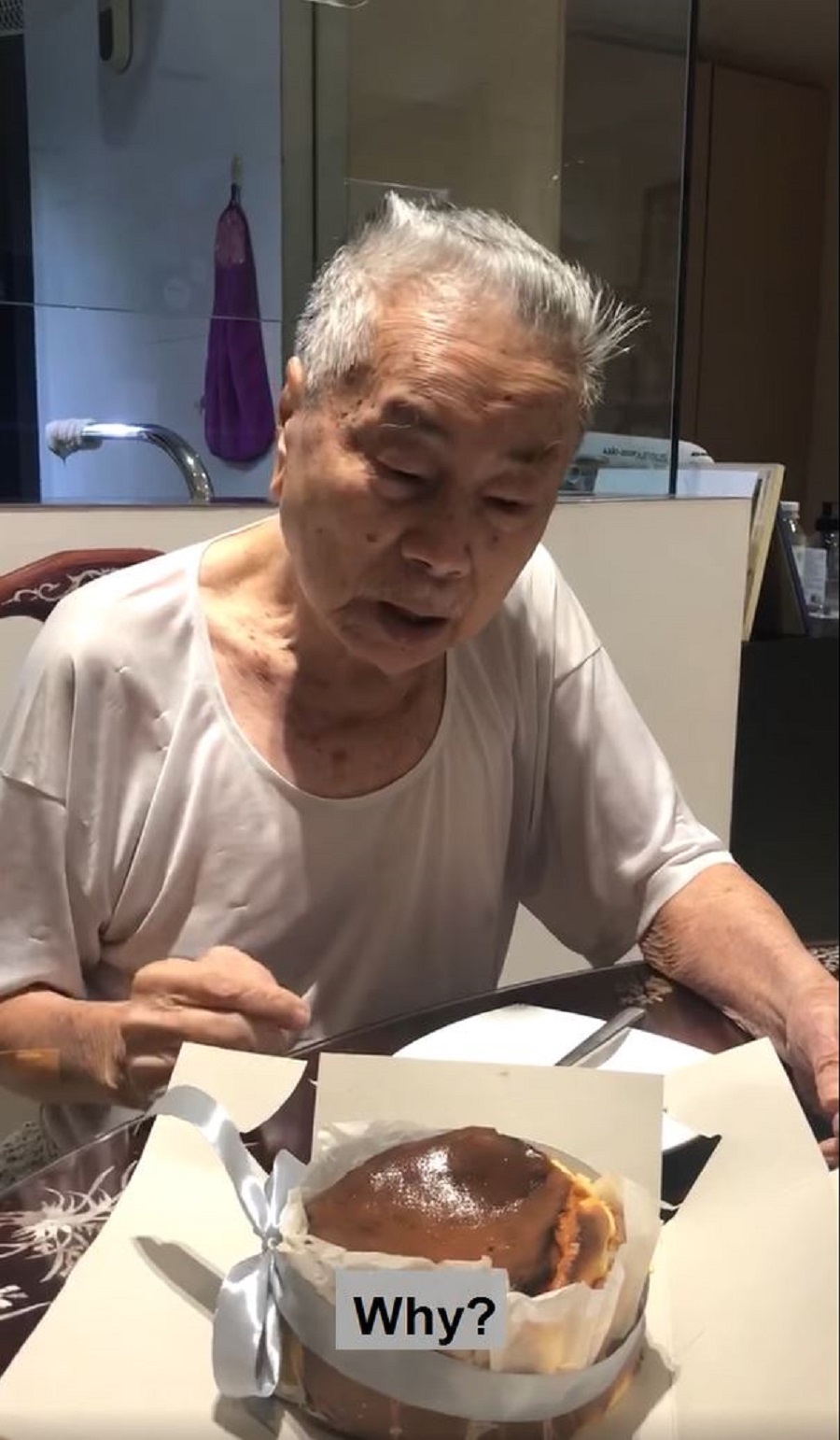 Initially, the latter clarifies that the burnt cheesecake was named such because it has a burnt top. But the adorable grandpa innocently asks,

The grandson answers that the cheesecake is a “burnt style of cake”. Since the elder is still confused, he clarifies in Teochew that the cake is made of cheese. 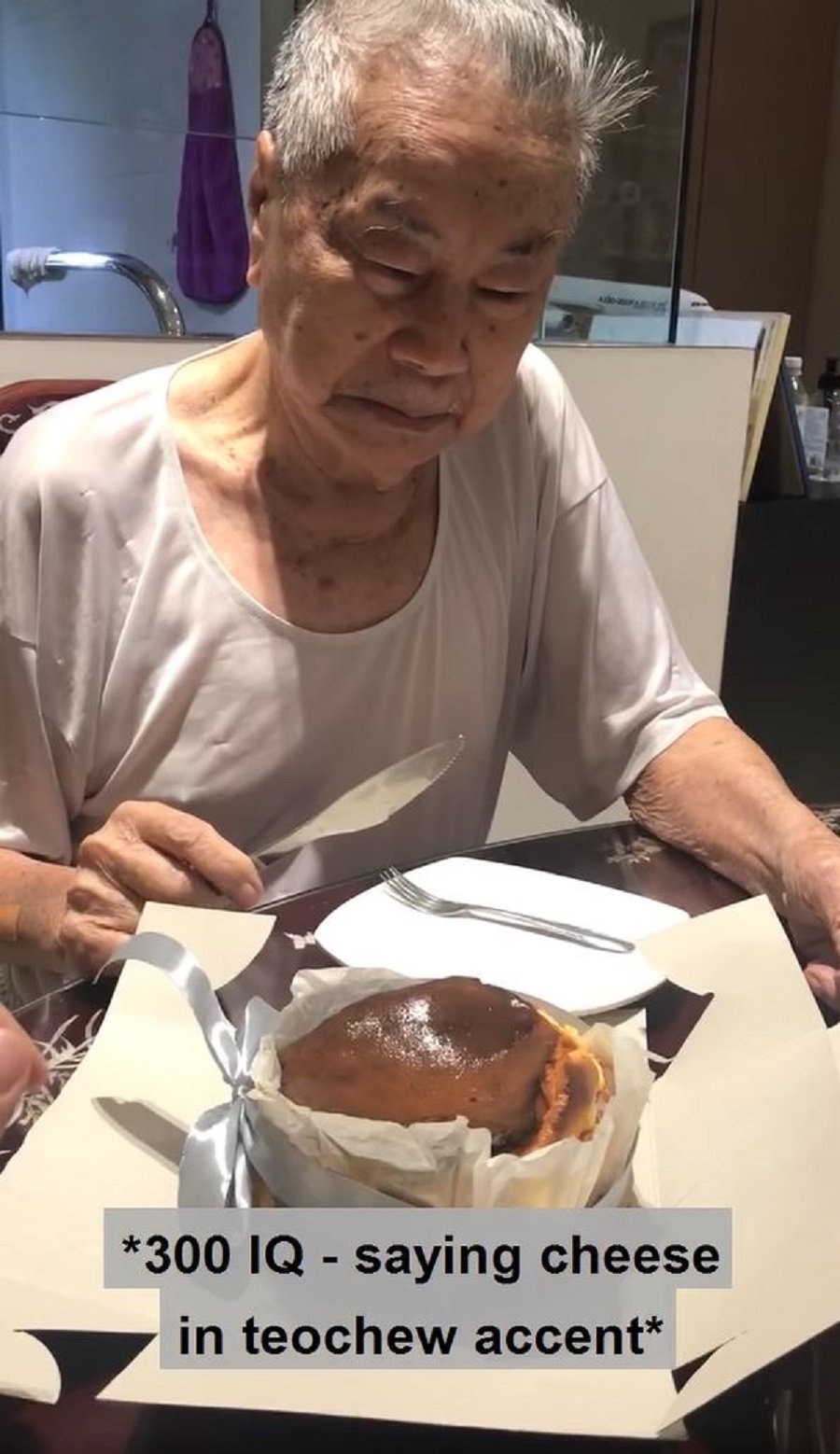 While the adorable grandpa understands his grandson’s explanation, he can’t seem to get over the price. He says,

Ok, but why is it so expensive?

The grandson simply says that the baked cheesecake was from his friend’s online bakery shop O Lady Cakes – with the Instagram handle (@oladycakes). She offered the grandpa a burnt cheesecake for free in honour of Father’s Day last Sunday (21 Jun).

Upon the revelation, the grandpa laughs, moved by the kind gesture. 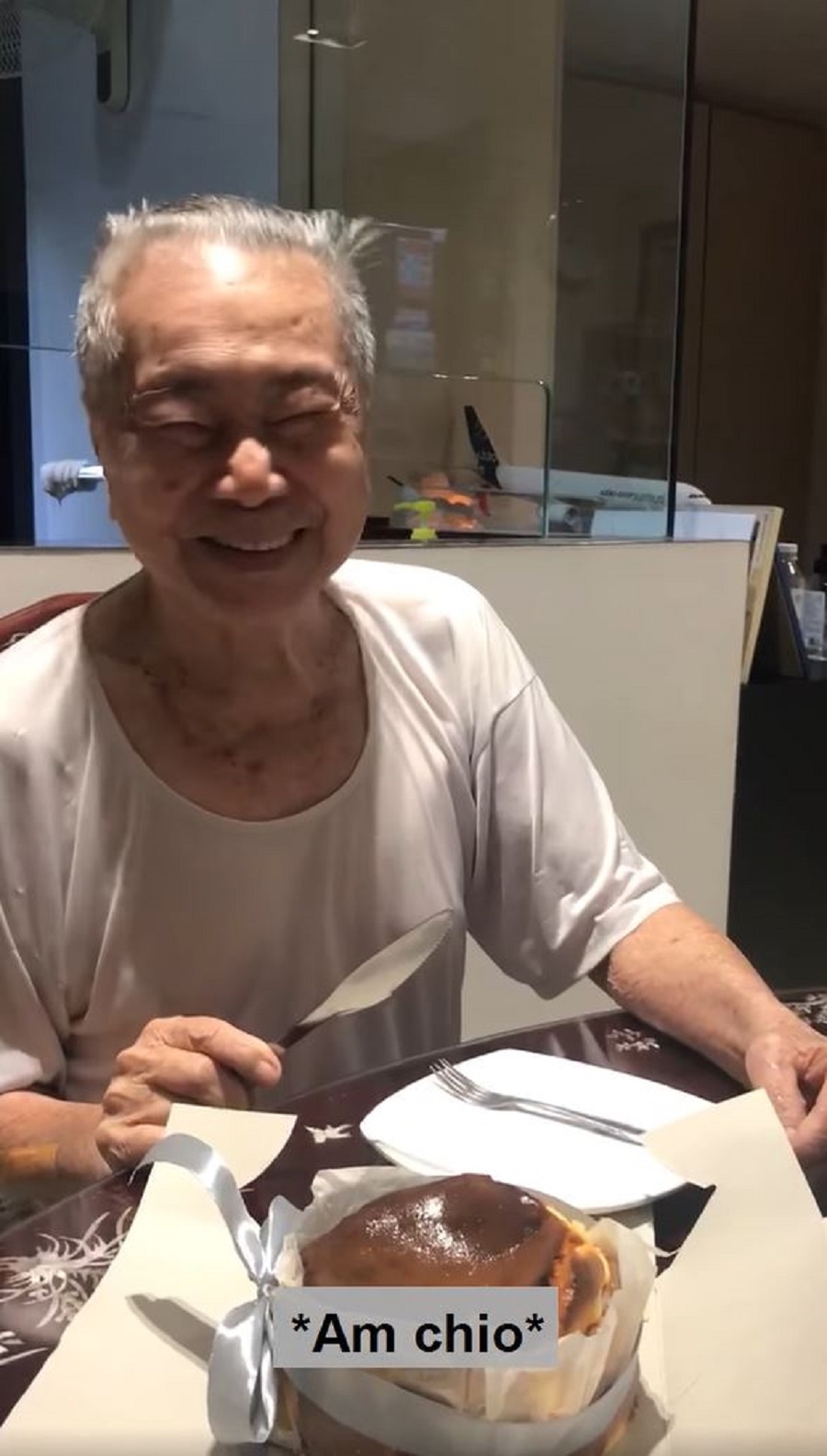 A few seconds later, the moment we’ve all been waiting for arrives, and the grandpa gives the cake a taste test. After taking the first bite, his grandson asks for his verdict. 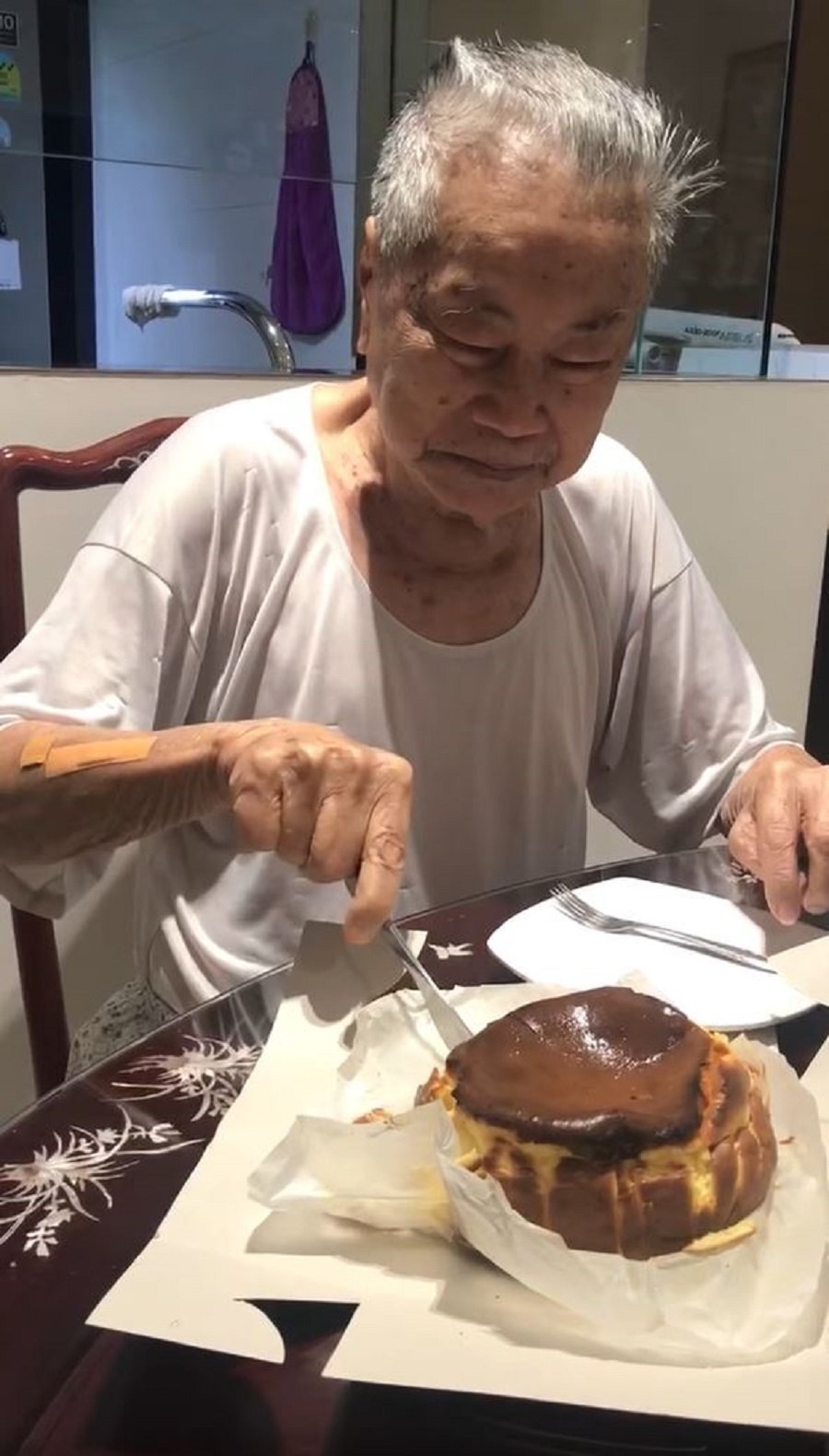 The adorable grandpa merely nodded in agreement and said, “Yes.”

Netizens who have watched their past videos will know that the grandpa wasn’t a fan of Dalgona coffee. It seems that the Basque burnt cheesecake is the food trend that has finally gained his seal of approval because it tastes “like butter”.

Satisfied with his verdict, the grandson wishes his grandpa “Happy Father’s Day”, which immediately elicits the cutest reaction. 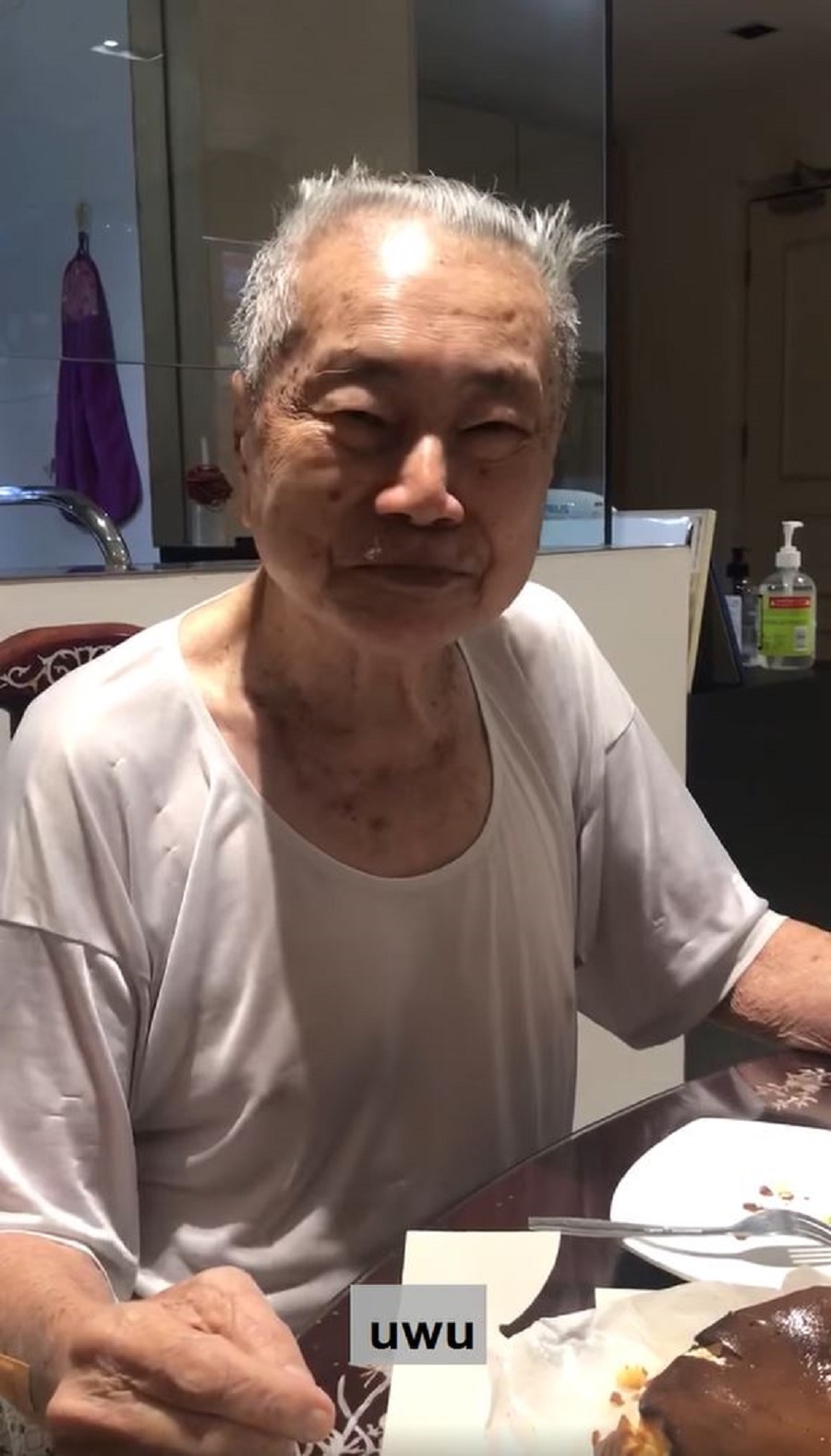 The video then cuts to him munching on the cheesecake crumbs, perhaps acutely aware of how expensive the cake was. 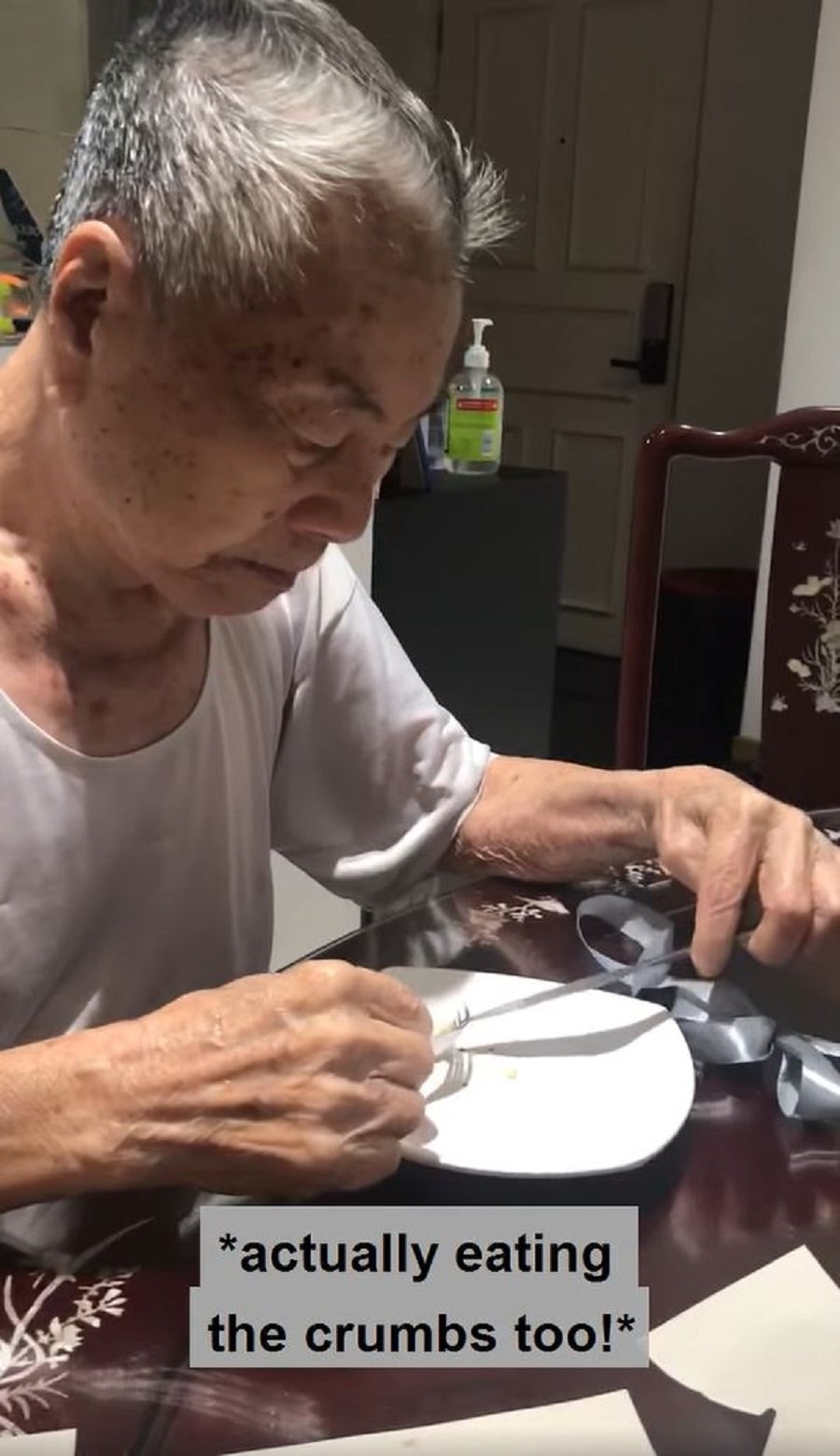 We’ve fallen in love with burnt cheesecake, but for the grandpa, durian will always be the king of his heart.

He immediately asks for a plate of durians, which he ate using chopsticks. 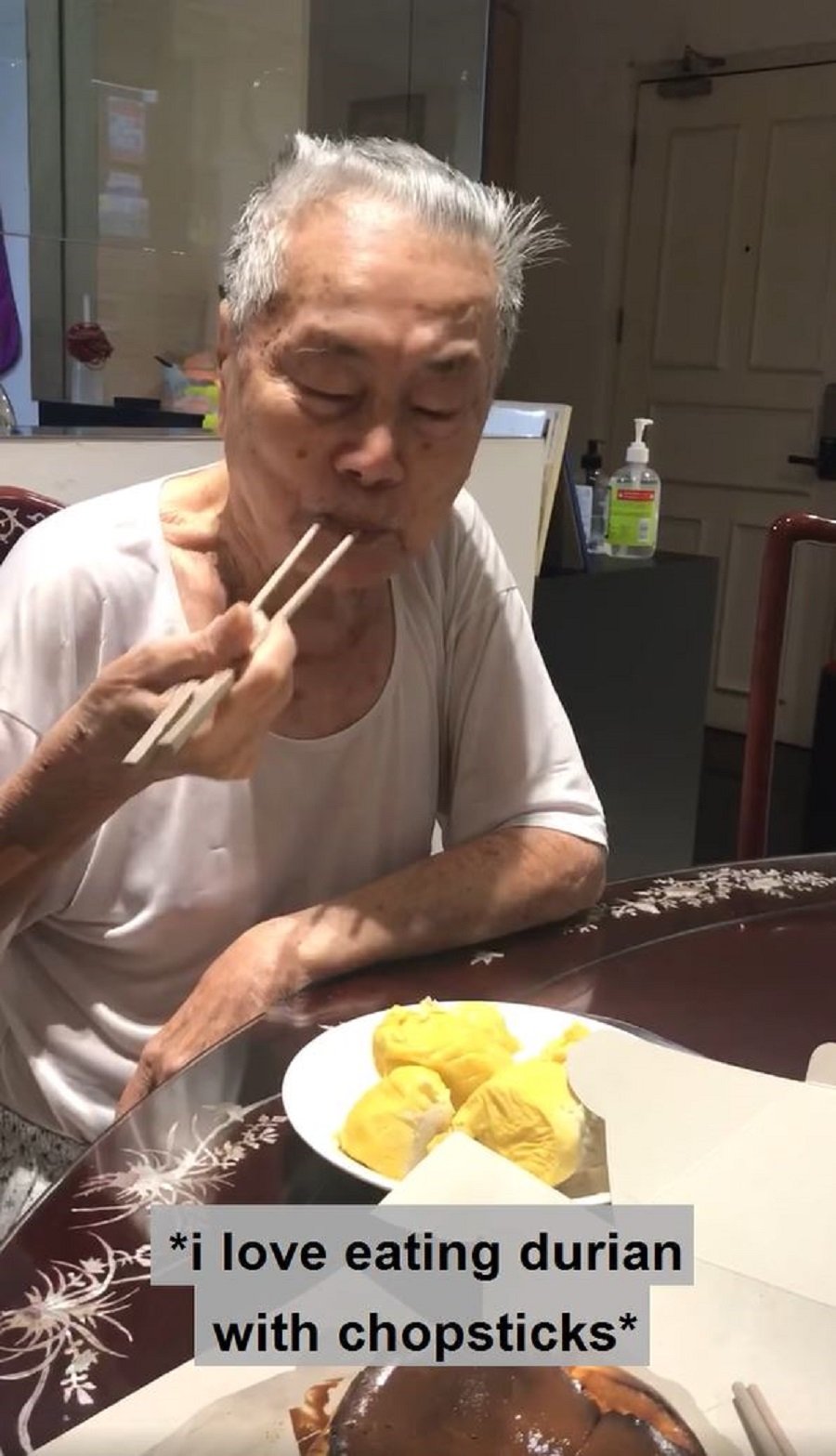 Hoping this series will continue

His grandson Emerson’s videos are a part of an ongoing series that involves his grandpa’s verdict on food trends. In the past, viewers eagerly watched the adorable grandpa eating a McSpicy and trying Dalgona coffee.

His reactions never cease to make us smile, so we’re hoping that we can witness more of these precious moments in the future. 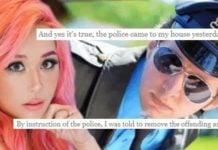