Doing our shopping online has become cheaper, faster, and more convenient. But sometimes there are those who’ll take advantage of the Internet to sell shoddy goods.

One Singaporean who ordered a hard drive from e-commerce website Lazada found out the hard way that some aren’t exactly making an honest living selling goods online.

A netizen took to Facebook group COMPLAINT SINGAPORE on 16 Dec (Mon) to warn others about what he experienced. 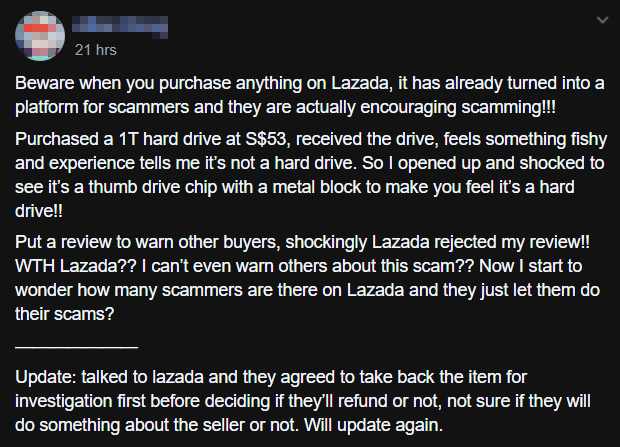 He reached out to Lazada and they are currently investigating the situation.

Found hard drive from Lazada “fishy” when it arrived

There was even a 4% discount, so all the more reason to buy it, right?

But when the “hard drive” arrived, the netizen’s experience with other devices led him to believe something was wrong with what he’d received.

Acting on this hunch, the netizen opened up the casing, and what he saw shocked him. Within the casing was a thumb drive chip.

Thumb drives are not in the same category as hard drives, even if they appear to be used for storage purposes.

Left review on Lazada, but rejected

Because of the incident, the netizen decided a warning was necessary in case other buyers get scammed by the same retailer.

To his surprise, however, his review was rejected by Lazada.

The reason for rejection was unclear.

MS News reached out to Lazada, who informed us that they were investigating the incident and that the item has been removed from listings.

We are aware and investigating the incident. We have delisted the product from our site and ask affected customers to reach out to Lazada Customer Service for support.

The netizen also mentions in the post that Lazada has agreed to take the item back for investigative purposes.

Cautionary tale for those who frequently shop online

Unlike buying from a brick-and-mortar shop where there is a certain accountability if the retailer is behaving dishonestly, it can be harder to track down sellers online due to anonymity.

A good way to tell if a retailer is reputable is perhaps by checking their reviews on the site you frequent. Otherwise, a Google search might reveal some past incident of shady behaviour.

Either way, it pays to be vigilant so that you do not fall victim to a scam. We hope the netizen receives a happy ending to this saga, now that Lazada are aware of the incident.