12 Hungry Ghost Festival Beliefs Explained, So You Can Survive The 7th Month

Now you know why there are no weddings during the 7th month.

Your ah ma might insist that you postpone your traditional Chinese wedding tea ceremony this August, and you may be wondering why.

August, aka the 7th lunar month, is widely believed to be when the gates of hell open for the Hungry Ghost Festival.

Some believe that all manner of spooky spooks & spirits are set free to roam in the human realm for a month.

That explains why some Singaporeans will be observing various superstitions, beliefs and rituals from 1 – 29 Aug this year. 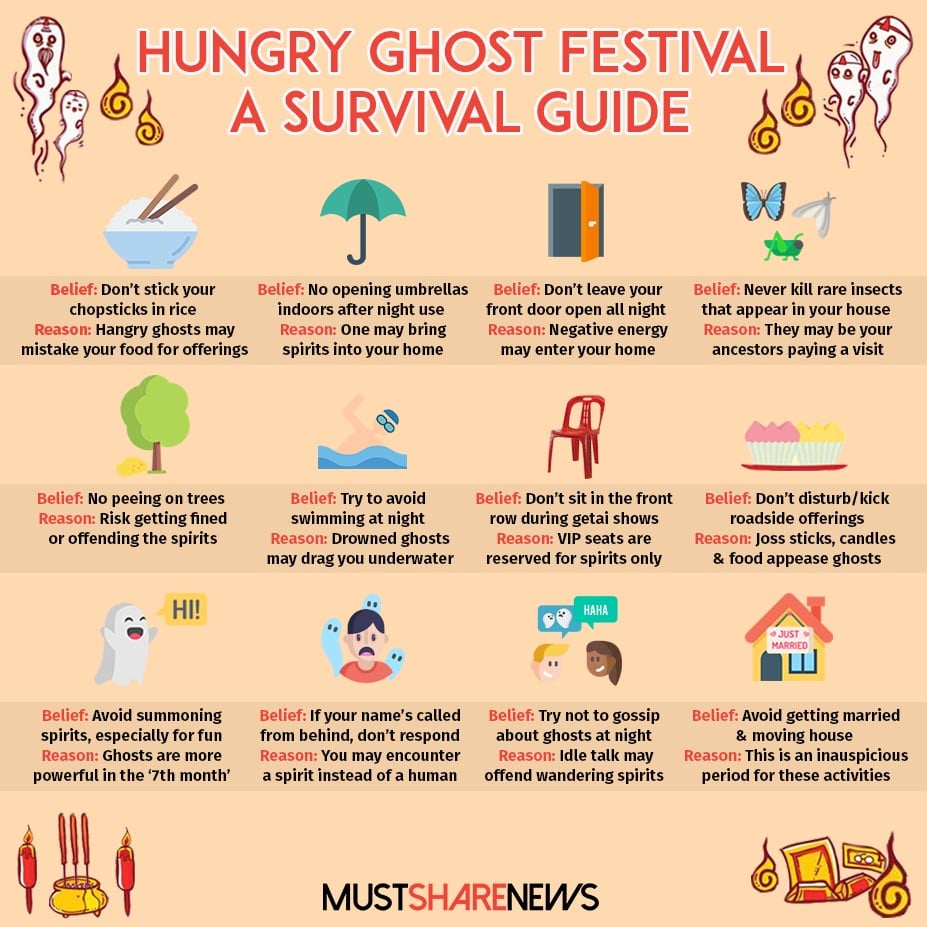 Here’s a quick introduction to them, so you don’t unintentionally offend any spirits — or concerned grandparents for that matter.

1. Don’t stab your chopsticks into a bowl of rice

Hungry ghosts may think your food is an offering to them, if you stick your chopsticks vertically into your bowl of rice.

Spirits apparently think this set-up resembles joss sticks, and may possess the person behind the meal while attempting to eat it.

2. Don’t open your umbrella inside the house

Using your umbrella at night may invite spirits to take shelter under them with you.

Upon reaching home, you shouldn’t open your umbrella within your house as some believe that this may bring the spirits into your home.

Besides common-sense reasons like attracting burglars, some believe that leaving the front door of a home or office open all night may invite negative energy into your premises.

You’ve probably heard of this superstition before, especially from the older generation.

Moths, grasshoppers & butterflies may be a manifestation of your ancestors paying a visit during the seventh month.

So do be reminded not to kill any less common insects that visit your house.

5. No peeing on trees

Though the urge may come suddenly to you, peeing in public areas is a crime in Singapore, with a maximum fine of $1,000.

Worse still, the act may offend spirits lurking in the area, so consider yourself duly warned.

If you enjoy taking a dip at night, you may want to schedule your daily swim at little earlier during this month.

Some believe that vengeful ghosts who have drowned in the past may pull or drag you underwater to meet the same fate.

Stages will be set up for ‘getai’ performances to entertain our ‘brothers & sisters’ from the other realm.

As they are considered the VIP guests, do not occupy the front row seats.

It is believed that people with ‘low luck’ who sit in these seats, may risk getting possessed by the opera-loving spirits.

If you spy stray iced gem biscuits, or brown steamed cakes and sweets with joss sticks along our streets, please do not disturb them.

These are offerings meant to appease the hungry spirits.

In the seventh month, people believe that spirits are more powerful.

Thus, when attempting to call upon ghosts to do your bidding, you risk enticing malevolent ghosts to play along.

10. Don’t respond when someone calls your name from behind

If you’re wandering around at night alone, do not respond when someone calls your name from behind.

The belief is that you may encounter a spirit instead of a regular human.

11. Try not to gossip about ghosts

Idle gossip or bragging that you aren’t afraid of any ghosts, may offend wandering spirits.

Your bravado may even challenge them to make an appearance, to ‘put you in your place’.

The seventh lunar month is widely considered an inauspicious period to get married or move to a new house.

As spirits are believed to be wandering around, believers think engaging in festivities may invite them to ‘join in’, even if they’re not welcome.

Taken with a pinch of salt

That said, though these beliefs should be taken with a pinch of salt, consider yourself wiser to the ways of our older generation.

Here’s to observing a meaningful Hungry Ghost Festival on 15 Aug, for humans and spirits alike.