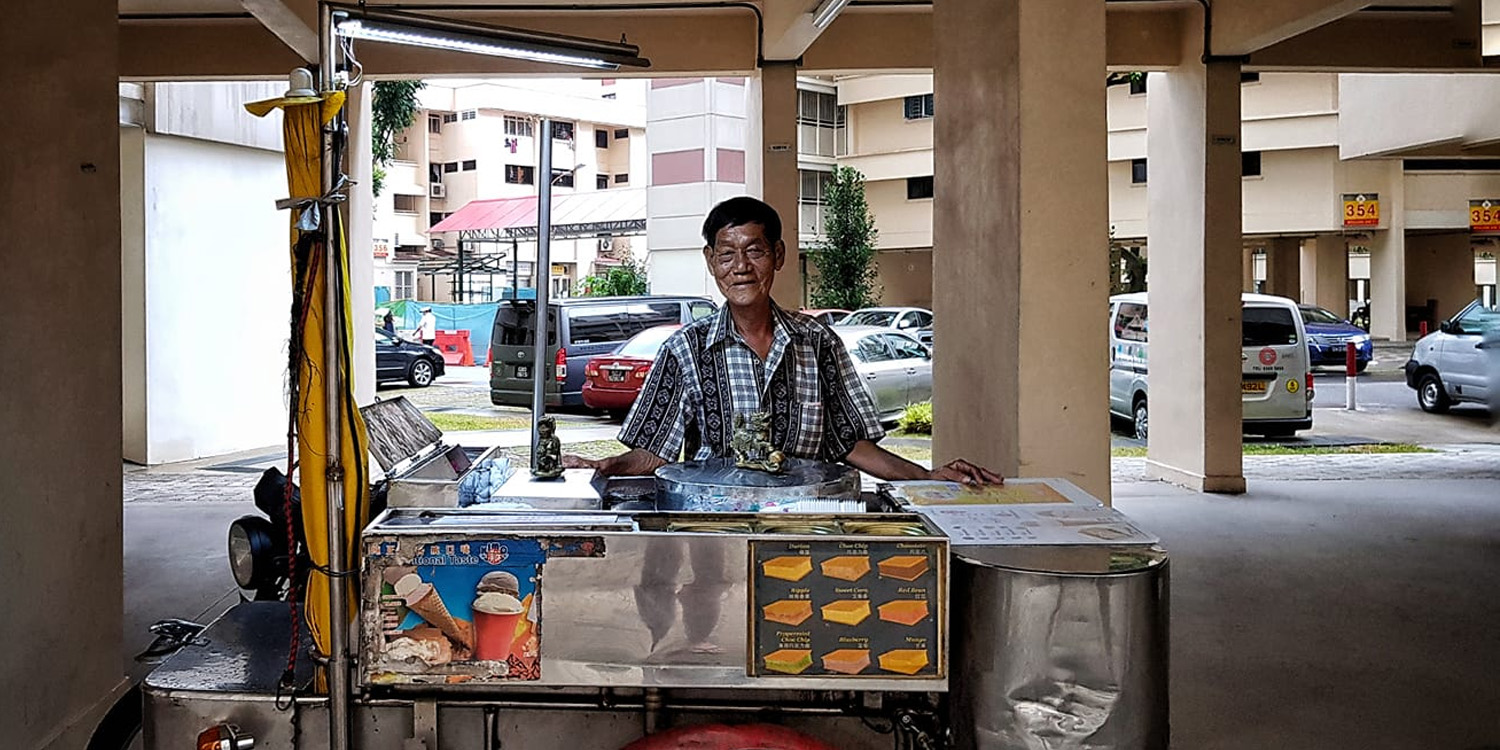 Few can boast of a 60-year career in any industry, but Facebook user ShuJun Koh found someone who can.

Nestled away in Hougang is Uncle Tan, an ice cream seller with an unassuming demeanour.

But behind the checkered shirt and weathered skin is a man who takes deep pride in his craft.

Netizens were alerted to his story by a post Ms Koh put up on Saturday (14 Apr).

In it, Ms Koh described a conversation she had with Uncle Tan.

It began with her asking Uncle Tan if his ice cream was of the same variety sold by vendors along Orchard Road.

To this, Uncle Tan replied,

I make my own ice cream. I have been making these ice creams for the past 60 years.

His pride is clear. He explains that his durian-flavoured variety is made of authentic Mao Shan Wang durians.

The attap-chee flavour, he’ll have you know, is made with “big attap seeds, not small pieces”.

Besides durian and attap-chee, Uncle Tan also whips up three other flavours: chocolate, mango and coconut.

When asked why he doesn’t want to set up shop in a more populated locale like Jurong, Uncle Tan comes back with a funny retort:

Jurong? Cannot lah. This vehicle cannot get onto expressway.

A unique aspect of Singapore’s culture

The post has been shared by more than 4,000 users, who were likely hit by a wave of nostalgia for an authentic taste of the past.

The interest in Uncle Tan’s traditional fare comes against the backdrop of ageing ice cream vendors with few willing to take over their reins when they retire.

Once a common sight in Singapore, these carts are now often acknowledged as part of our disappearing heritage.

Here again, Uncle Tan stands out among his peers: his business helps to strengthen inter-generational ties within his family.

According to Shin Min Daily News, both his daughter-in-law and his 14-year-old grandson help out with his business.

His grandson even hopes to open his own ice cream factory one day.

Ending on a sweet note

Asked why he does not sell his ice cream at busy intersections such an interchange or outside a school, Uncle Tan is candid in his response.

Interchanges, he says, are too busy. And schools?

Some kids with no money but keep standing beside you and look[ing] at the ice cream, how to tahan?

How to tahan the temptation of his ice cream? Of course cannot la.

Truly, both Uncle Tan and his thriving craft are essential ingredients to our local flavour.