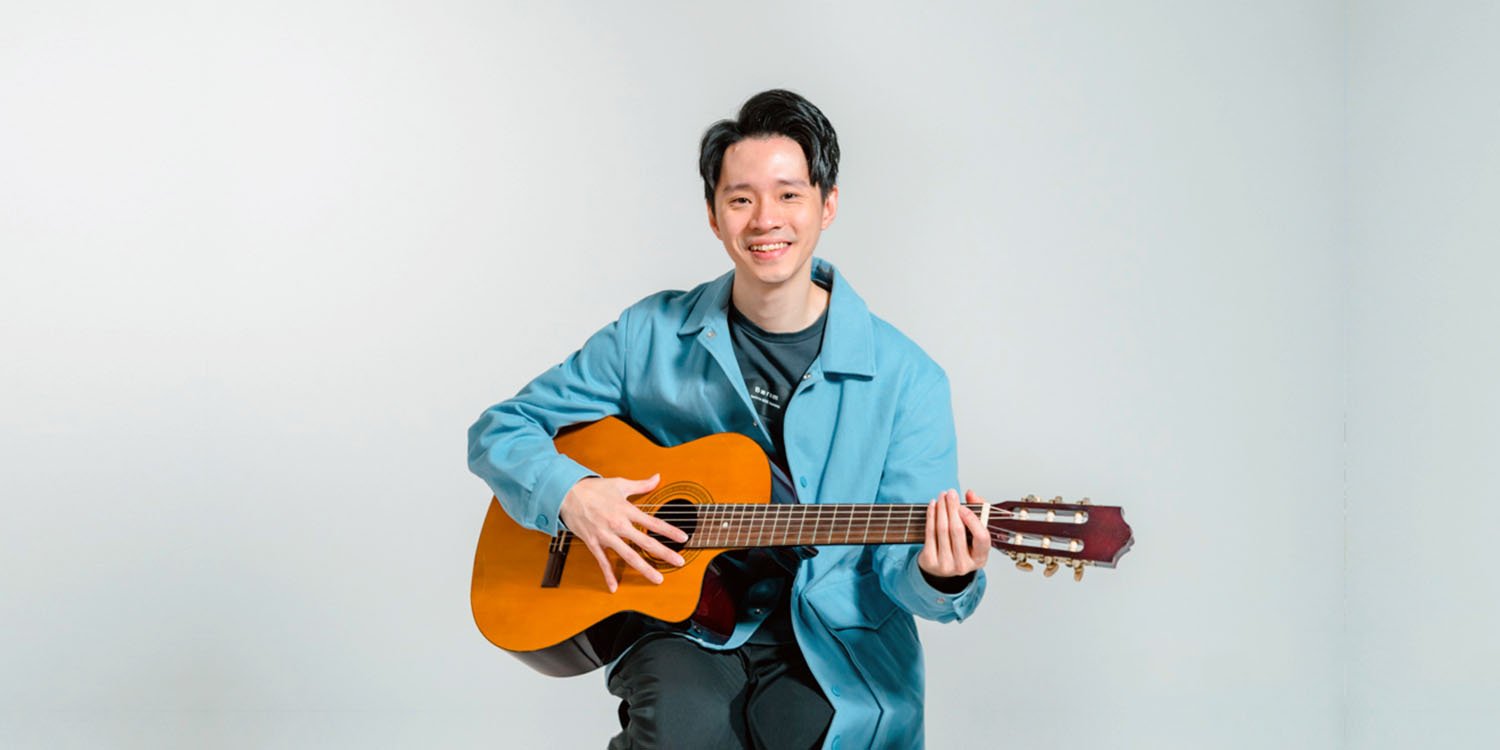 Jeff still hopes to perform outside The Cathay in the future because of its atmosphere.

EDITOR’S NOTE: MS News‘ interview with Jeff was conducted before his past allegations went viral. We are aware of the controversies and have reached out to him for comment. We will add his response as soon as he replies.

It’s 5.30pm on a Saturday, and groups of people, young and old, are gathering in front of The Cathay, as though anticipating an exciting turn of events.

Along comes a reasonably well-dressed man who strolls towards an empty spot among the crowd, his electronic keyboard and speakers in tow.

He sets them up quietly and later approaches the microphone. By now, the crowd has swelled, swarming around him and stretching to the ends of the building nearby.

He sings his first note, gliding into a melody that soon has the audience waving their phone flashlights and lightsticks enthusiastically in the air.

For 32-year-old Jeff Ng, this night, 25 Jun 2022, will forever be etched in his mind as one of the most memorable moments in his life.

The busker, who became an overnight sensation after clips of his performances outside The Cathay went viral, sat down with MS News for a candid interview about his life so far. 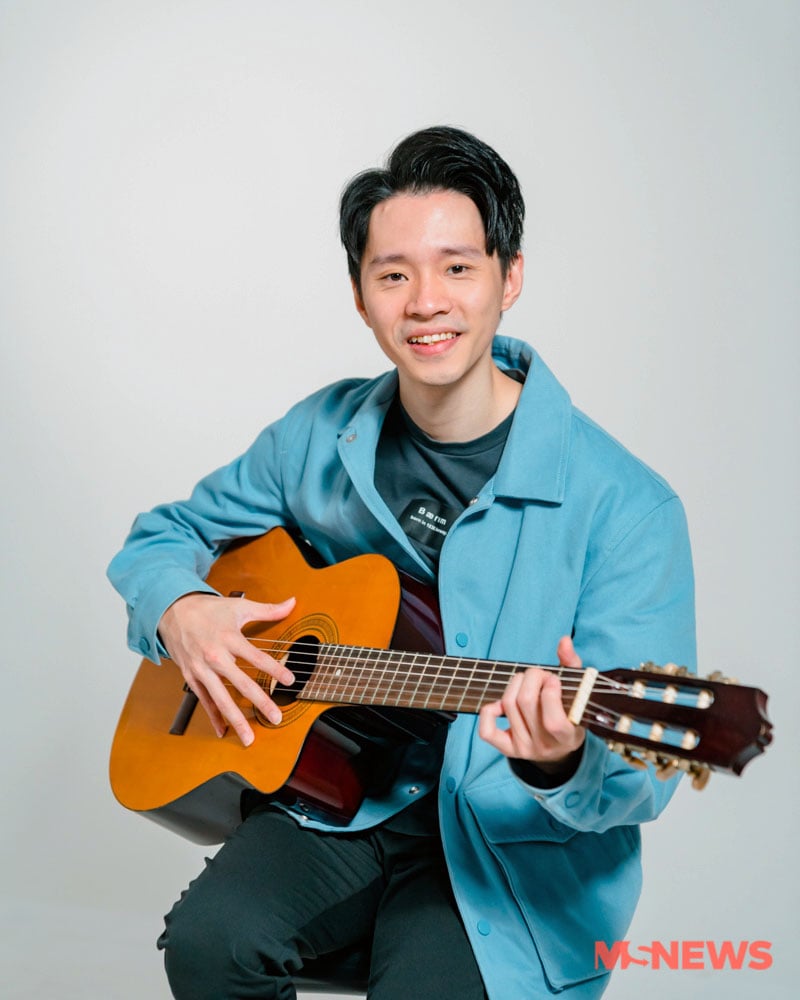 From serenading several onlookers at Chinatown Street to belting songs in front of a few thousand people every week, he looks back at an experience that has both catapulted him to fame and humbled him.

Stumbled into music by accident

Seeing Jeff’s confidence now, it would be easy to assume that he has been doing music all his life, but the truth is quite different.

His first foray into music began in primary school when his mother convinced him to join the military band as a CCA.

But as someone who preferred playing basketball back then, Jeff cheekily admits to skipping band practice for the sport instead. 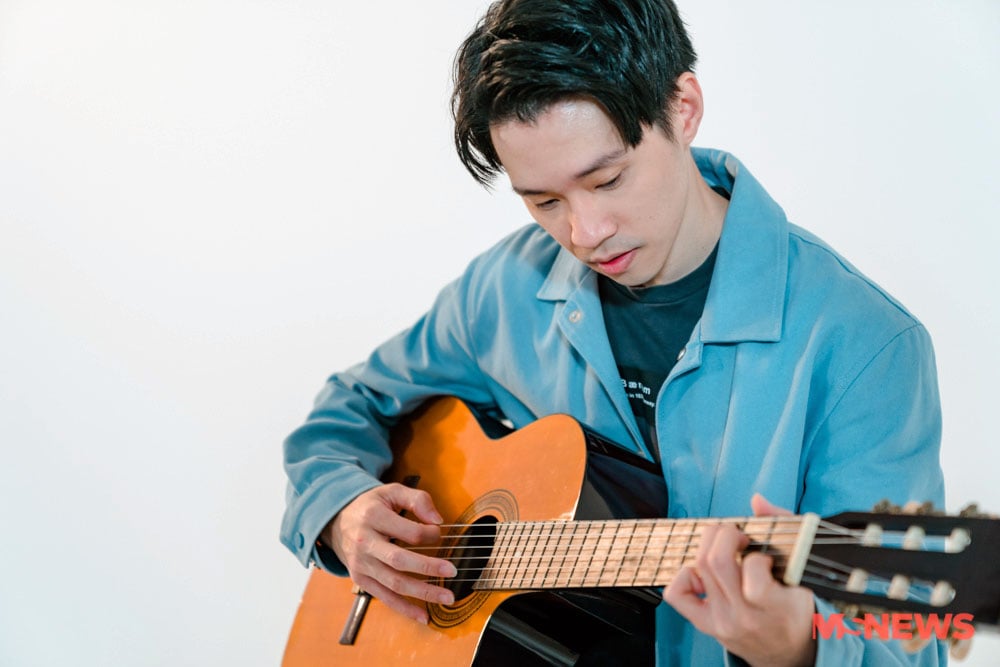 Still, he persisted, playing the trumpet well into secondary school for a total of 10 years, honing his skills and sense of tempo. Outside of school, he began picking up instruments like the guitar and piano, teaching himself how to play his favourite songs while singing along.

At 17, Jeff was given the opportunity to showcase his singing at music cafés and bars. But like any rookie, he struggled with stage fright, which caused him to sing the wrong lyrics, go off-pitch, and miss some beats.

“My teacher and seniors then guided me and advised me to visualise myself to be in a familiar setting, like in my usual jam room,” he smiles as he recalls how the people around him helped him overcome his nerves.

Once he found his groove, Jeff went on to perform at various venues before pressing pause to serve the nation.

But the two years flew by, and he was right back at it, teaching at Ark Music School after completing his National Service.

There, he gained access to better musical equipment and opportunities to perform, which eventually led to his participation in The Voice of China Season 3. 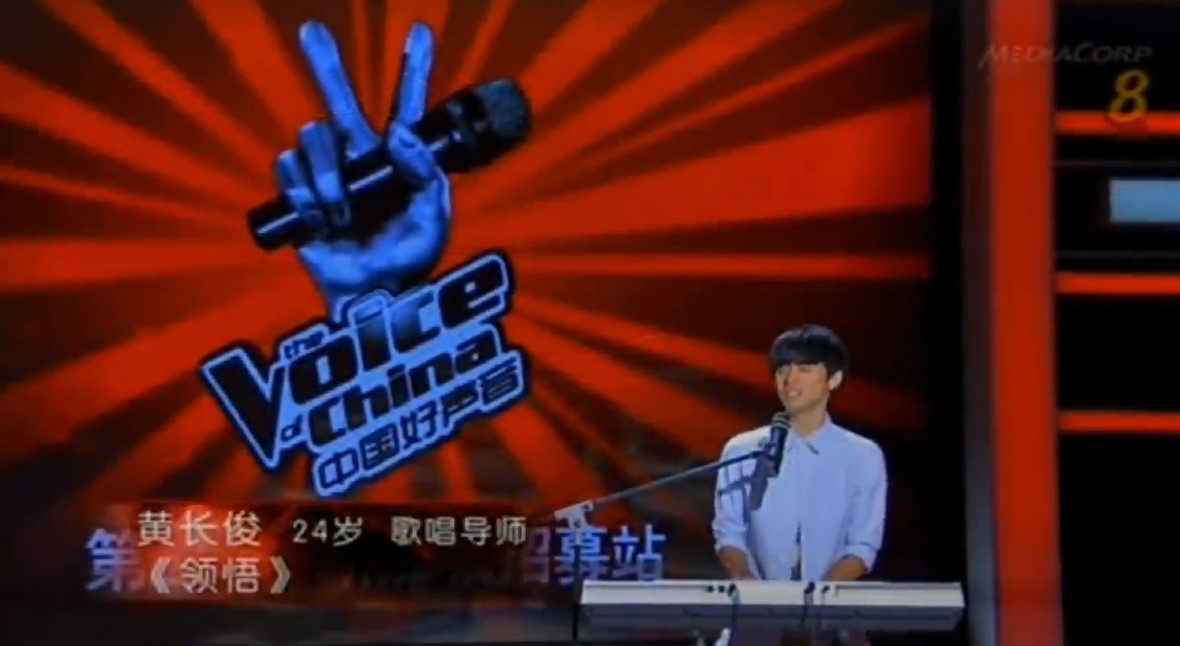 At 24, the experience allowed him to make connections with other musicians in the industry, which helped establish a strong network that would prove helpful in his career.

Then, in 2018, Jeff was approached by the Singapore Tourism Board with an intriguing offer — for him to busk at Chinatown as part of a weekly event spanning two months.

But two months turned into two years, throughout which he began hearing comments about his voice sounding a lot like Singaporean Mandopop singer JJ Lin.

I used to watch many online clips of Jay Chou and JJ Lin and tried to incorporate their singing techniques into my own!

Early days of singing in Chinatown & during the Covid-19 period

Despite being able to bide his time through busking, conditions weren’t always favourable, especially in the early days.

Jeff vividly remembers seeing only five people watching him as he sang his first song in Chinatown while they ate their char siew rice and Hokkien mee.

Things continued at a comfortable pace till the pandemic hit Singapore at the start of 2020. 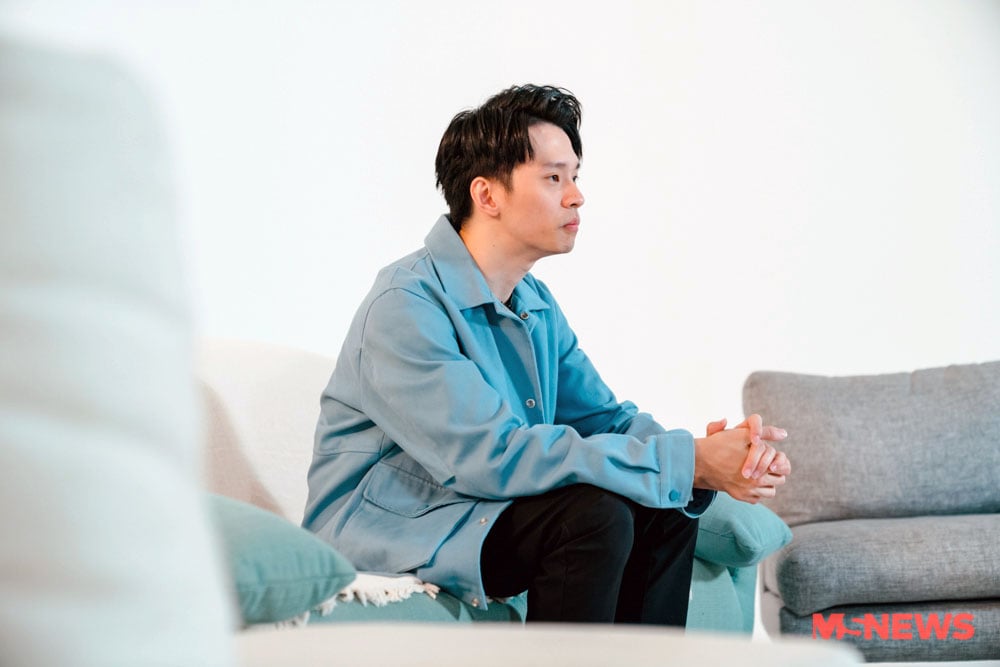 In fact, this period, he shares, was when he got many more students than usual. He offered them a 30% discount on school fees as he felt there were limitations to teaching online.

“The Covid-19 period also pushed me to be more active online. I would do livestreams of me singing and upload these clips across all my social media accounts.” These short clips soon gained numbers, as more people fell in love with his euphonious voice.

From livestreams to live performances at The Cathay

His popularity skyrocketed, particularly when he resumed his busking performances, this time outside The Cathay. 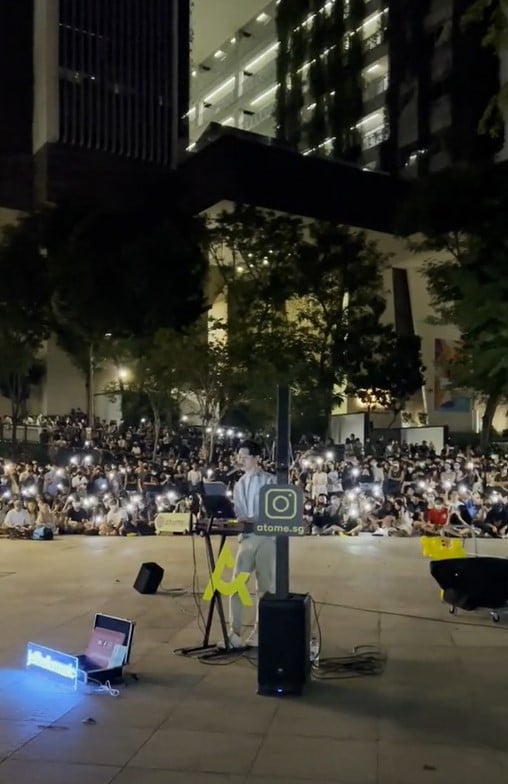 When asked why he chose The Cathay, Jeff harks back to a casual conversation with his family about how nice it would be to have a busking set in front of the building.

As someone who enjoys watching movies there every week, he knows the place well and could envision himself singing outside to the people milling about.

So when busking was allowed to resume, and a slot opened at The Cathay, he did not hesitate to secure it.

I was thrilled. I bought all my speakers and invested about S$5,000 in keyboard batteries.

His commitment to providing the best performance paid off, as his audience capacity grew each week, culminating in the roughly 5,000-strong crowd at his last show on 25 Jun.

Unlike most performers, Jeff does not have a fixed setlist, as he only performs songs that members of the public request.

It’s 100% spontaneous. I will get requests online or DMs the day before my performances and choose the songs from there.

One memorable song dedication was probably when a small girl came up to him with a piece of candy and asked, “Can you sing 新不了情 for me?”

“I asked her, ‘Is this your mum’s song request?’” Jeff chuckles, noting that the song was popular in the 90s, well before the child was born.

Besides practising wisely, he also takes good care of his throat by drinking lots of water, consuming manuka honey, and trying his best to avoid spicy or oily foods before a performance.

With his health in check, Jeff can then assume his stage persona easily, as he admits to becoming “an entirely different person” while getting the feel of a song. 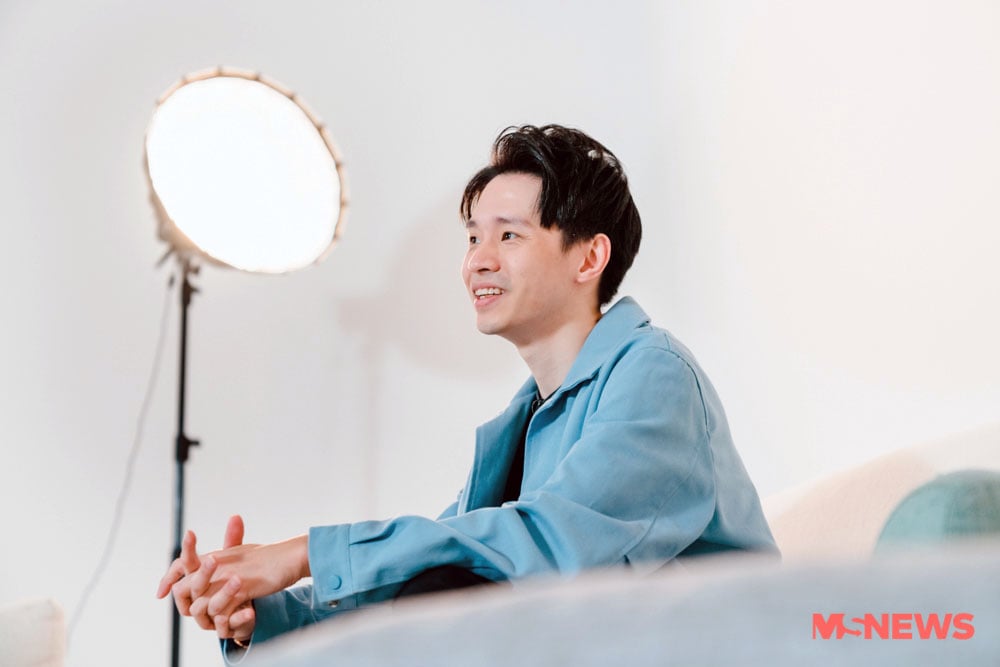 No matter what song he performs, he tries to understand the story it tells and does his best to convey it. And yes, he also sometimes sings English songs, citing Ed Sheeran, Sam Smith, and Westlife as some of his favourites.

But since his focus now is to gain exposure in the Taiwanese media, he sings Chinese songs most of the time.

Though he seems at ease with the large crowds that have turned up for his performances, Jeff admits that the recent outpouring of support has been rather overwhelming.

He recounts how he lay in bed one night and prayed,

I said I have enough in life now. Can I give you back?

In a mixture of English and Mandarin, he also shares a recent visit to the temple, where he expressed gratitude for his life’s blessings. “I feel… grateful at this point. I am very grateful for everything I have now.”

When probed about coping with his newfound fame, he humbly refuses to accept the compliment. “I’m very thankful for all the support and messages everyone has been sending me.”

But I also apologise to those I have yet to reply to. I am a one-man team and am doing my best to reply to all of you.

He hopes everyone can understand while he tries to take things slow for now, only occasionally engaging his friend Leon Lim to help him with admin matters.

“My life has changed,” Jeff proclaims.

Recruiting people to build a team

Things have certainly gotten a lot busier, leaving him with much less time for himself and his family. What little free time he has, he uses to clear admin matters or write songs.

He even had to hold off holiday plans, brushing aside his wish to visit the newly opened Genting SkyWorlds in Malaysia with his loved ones in March.

But the increasingly hectic schedule is no excuse to forget the more important things in life. Jeff always tries his best to achieve a work-life balance by drafting his weekly schedule every Sunday night.

Regardless of how tight time might be, he makes time for seven key aspects — family, friends, ‘me’ time, exercise, his career, music, and relationships.

To help him achieve all this, he’s now recruiting more people to gradually build a team.

Even while working solo, he has managed to secure a performance opportunity in the upcoming National Day Parade in August – perhaps a testament to his hard work and determination.

Dreams of opening a music school to nurture young musicians

Beyond his upcoming gigs, however, Jeff has no plans to pursue a full-time career in music.

Although a few local music labels have approached him, he’s weighing his options carefully as he takes his age and family into consideration.

In short, Jeff wishes to lead a much simpler and less hectic life. 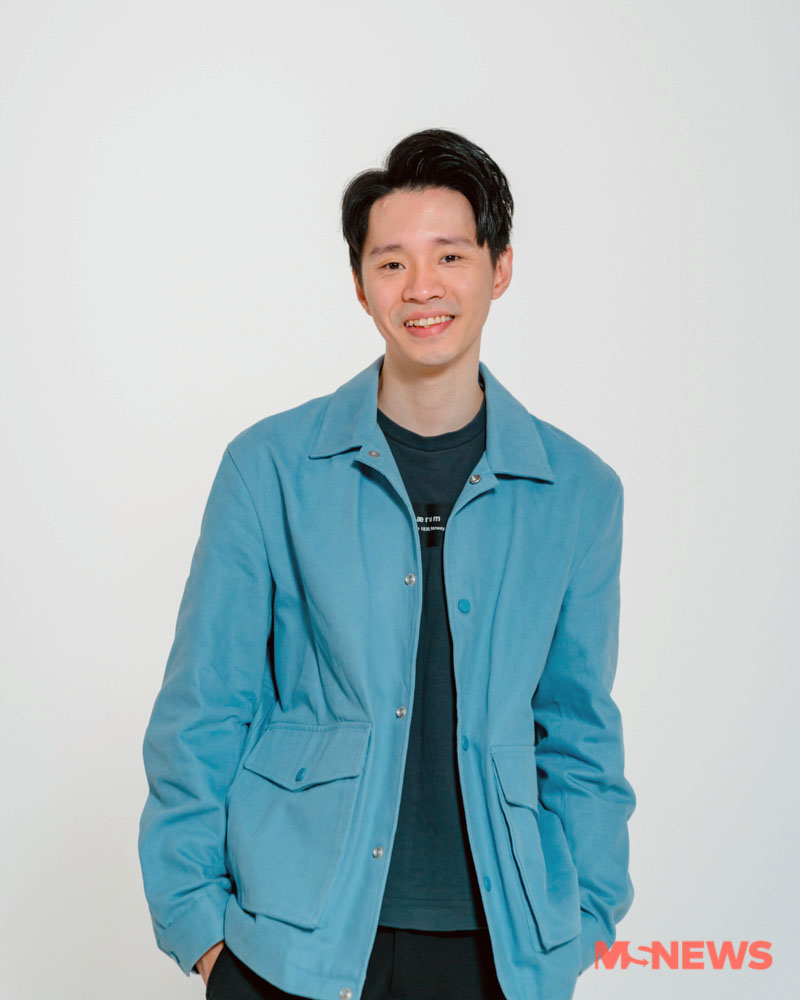 Nevertheless, he already has three or four original songs produced, pending music video shoots in Taiwan. He also has a dance song that he’s excited to release soon.

On top of that, Jeff hopes to work on more music production, writing movie soundtracks and collaborating with artistes towards the end of this year.

“Five years from now, I still foresee myself performing. But I’d be mainly running multiple businesses, including music schools and entertainment companies.”

“My plan is to run my businesses in a three-storey building — on the first floor would be a music café, the second a music school, and the third a recording studio.”

Even while doing all that, Jeff hopes to still be able to perform at The Cathay, where he describes the atmosphere to be special and comfortable for him.

Reflecting on his growth in the music industry, Jeff ultimately wishes for Singaporeans to appreciate the local art scene more.

Whether it’s words of encouragement or attending events, he feels that any form of support will mean the world to a local artiste.

Your support by showing up for their showcases or purchasing their songs online, for example, will make them feel it’s worth it to keep producing their works.

And for those who aspire to be musicians, Jeff believes that one can achieve their dream as long as they are sincere and have a strong passion for music.

“Focus on creating content you love. If you love doing it, you’ll do it well.”

With his future goal of setting up his multi-businesses, Jeff hopes to help young and aspiring musicians do well both locally and globally with the help of his resources and connections.

He wishes to bring local artists and musicians to a broader audience to prove that Singaporeans can indeed go far.

I hope the younger generations can surpass current experienced entertainers like Stefanie Sun and Tanya Chua.

The journey to fame is fraught with highs and lows. And in the past week, Jeff had been thrown into the limelight once again as allegations about his past behaviour and relationships emerged.

While he had issued a public apology to his ex-girlfriend, his wife has also come out to defend him, saying he is now a changed man.

Nonetheless, it is going to be an uphill journey for him to change public sentiment and regain everyone’s respect.

As he trudges on in the face of criticism, we wish Jeff all the best in his future endeavours.

Know inspiring individuals like Jeff? Get in touch with us via email at news@mustsharenews.com.