He allegedly called her 218 times overnight on one occasion.

Local singer Jeff Ng recently shot to fame thanks to his busking gigs outside The Cathay, which attracted large crowds in the thousands.

While videos of his superb vocals made rounds online, damning allegations of his past also started circulating on social media.

One exposé, allegedly from an ex-girlfriend he dated for three years, accuses Jeff of emotional abuse and manipulation. She even describes him as the “WORST person” she has ever met. 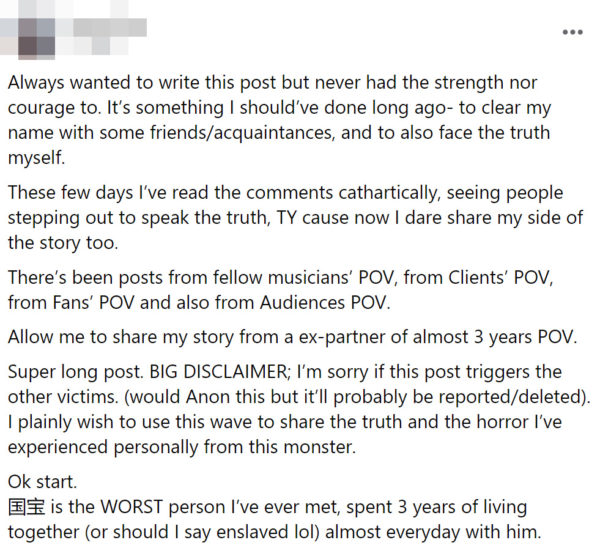 The singer has since issued a statement apologising for his actions. He also declared that he is taking steps to “become a better person”.

If you’ve got the time, you can read his ex’s full post here. We have to warn you, though — it’s really long.

In a lengthy post on Friday (1 Jul), Facebook user Lena Ng, who allegedly dated Jeff for three years, shared about numerous occasions in which the singer allegedly emotionally abused and manipulated her. 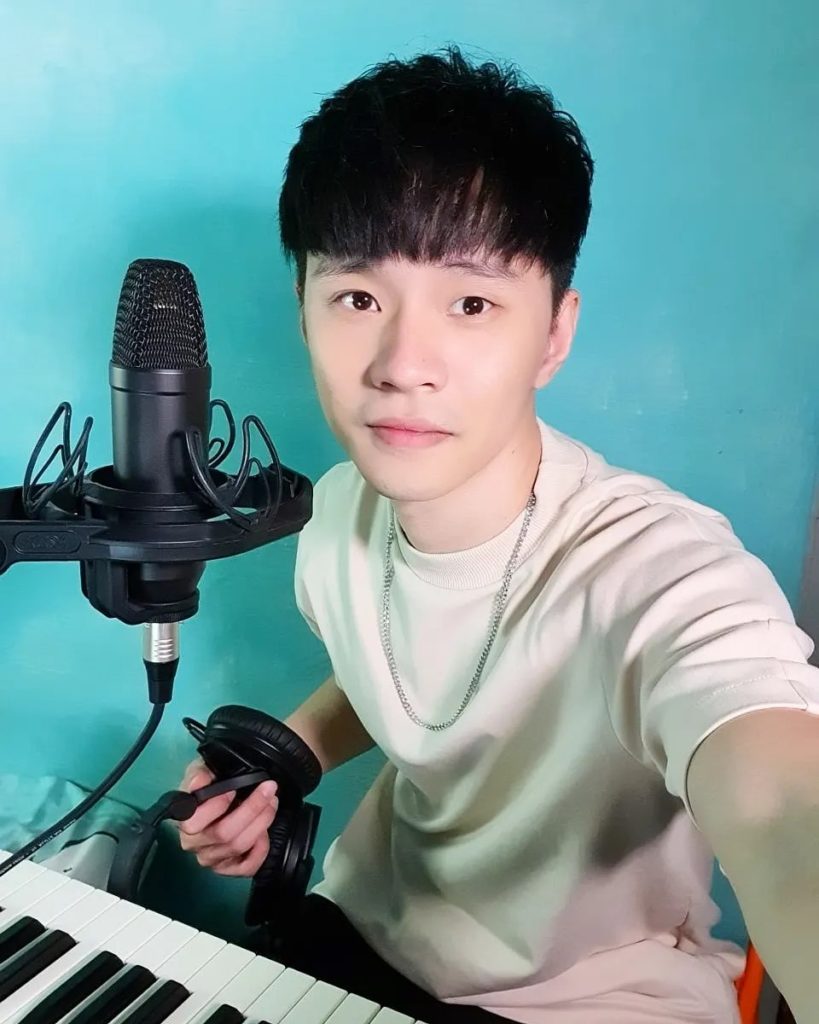 To keep things succinct, we won’t be listing all the instances in this article, but here are some of the more serious allegations.

According to Lena, Jeff had a habit of blaming her for everything “bad” in his life.

By his book, anything that goes wrong, it is your fault and you have to be punished and make up to him for it. But he himself can do no wrong.

Believing that it was her fault whenever things went south, Lena shared that she ended up doing anything for the affection he once showered on her.

Jeff also allegedly hated being on the receiving end of questions, even if they were valid.

Lena recalled being “compelled to obey like a dog” whenever he called, and that she would literally tremble “in fear of incurring his wrath”.

Busker allegedly cheated on her thrice

In addition, Lena accused Jeff of being a “serial cheater” who purportedly cheated on her thrice during their three years as a couple.

When they first got together, Jeff was apparently dating three girls at the same time. But when Lena found out about it, he somehow got her to apologise for ruining his day instead.

It seems Lena also had to disguise or even hide their relationship for a myriad of reasons while they were dating.

Illustrating her point, Lena said there were instances where she had to hide while waiting for Jeff to finish his lessons with his “female students”.

She also had to leave Jeff’s gigs early so she wouldn’t be seen by his “female fans” and cause a misunderstanding.

Sometimes, this meant she would have to wait for several hours on end.

Once, Jeff asked Lena to wait in his parent’s room while he allegedly cheated on her with another girl in his own bedroom.

He allegedly told her that he was “born in the wrong generation” because he could’ve had “many concubines” if he lived in the past.

“Next to impossible” to end relationship

Despite being advised numerous times to leave the relationship, Lena claimed that it was “next to impossible”.

Whenever she tried to end things, it would just spark more drama. Jeff would allegedly beg, cry, and promise to change for the better. He also allegedly threatened suicide and even resorted to stalking her.

Sometimes, Jeff would harass Lena until he got a response. On one occasion, he allegedly left her 218 missed calls overnight. 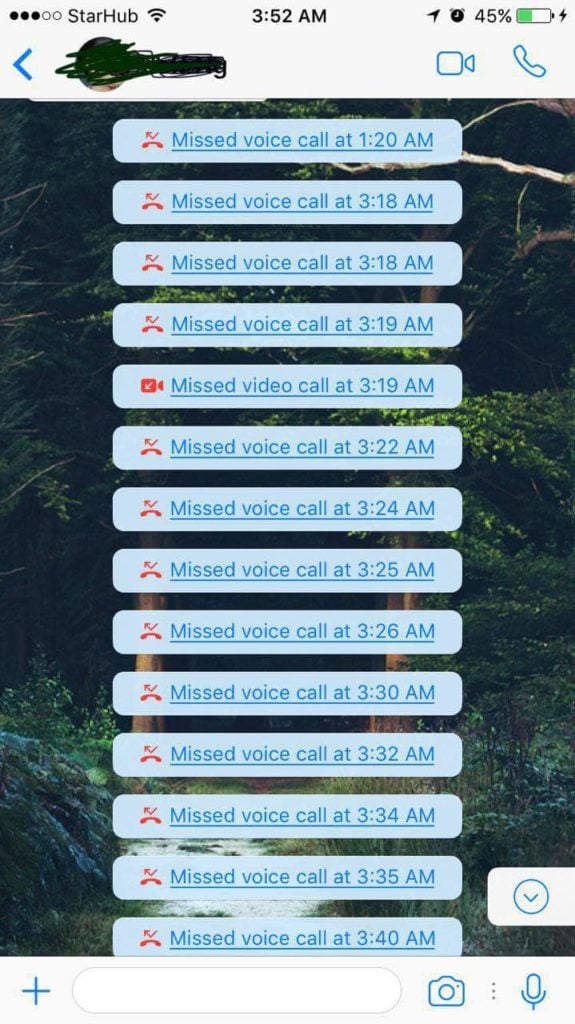 After believing in him and even ruining other relationships by taking his side, Lena eventually realised that Jeff “will never ever change”, at least not with her.

I was in a ‘relationship’ that I didn’t respect nor love my partner, it was pure fear and compulsion holding on.

When Lena finally called it quits after multiple attempts, Jeff allegedly harassed her for months and stalked her. There was a period when she needed to be surrounded by friends “almost 24/7” to feel safe.

She ended her post with a warning: “Abuse enough people and you’ll get bitten back eventually.”

On Friday (1 Jul) afternoon, Jeff issued a statement apologising for his actions. 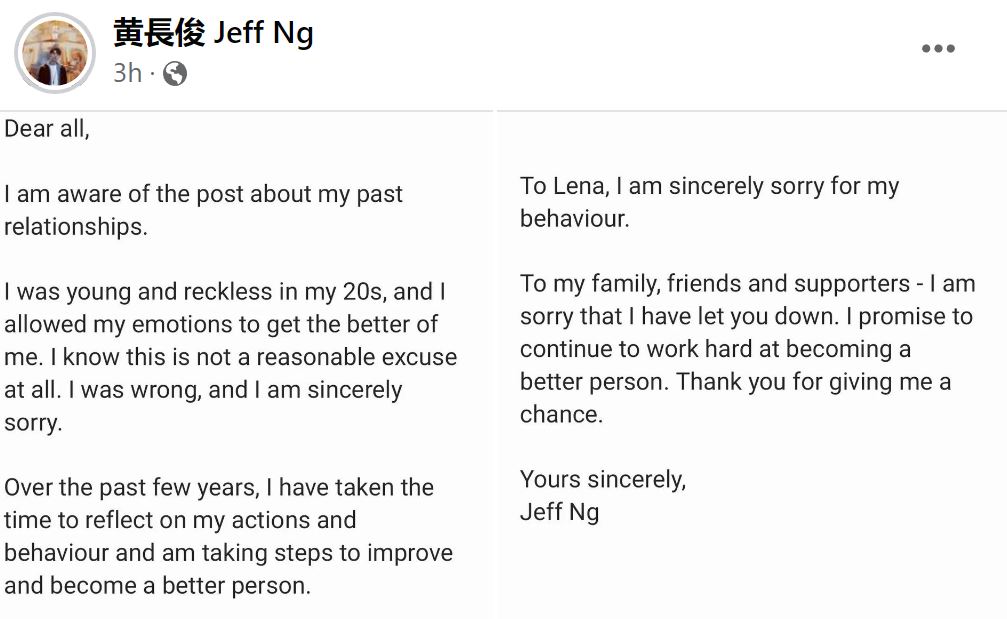 According to him, he had been “young and reckless” in his 20s, letting his emotions get the better of him.

He also wrote that he has been reflecting on his actions and is “taking steps to improve and be a better person”.

Besides saying sorry to Lena, Jeff also extended an apology to his family, friends, and supporters for letting them down.

Hope those affected will heal from their experiences

It’s sad to see such a talented individual experience a fall from grace so quickly after rising to fame for his musical skills. However, we think this should be a reminder to always treat people with kindness.

Regardless of what happened in the past, we hope Lena and all other parties whom Jeff may have hurt will heal from their prior experiences.

Most importantly, we hope that Jeff meant every word he said in his apology and will strive to become a better person.