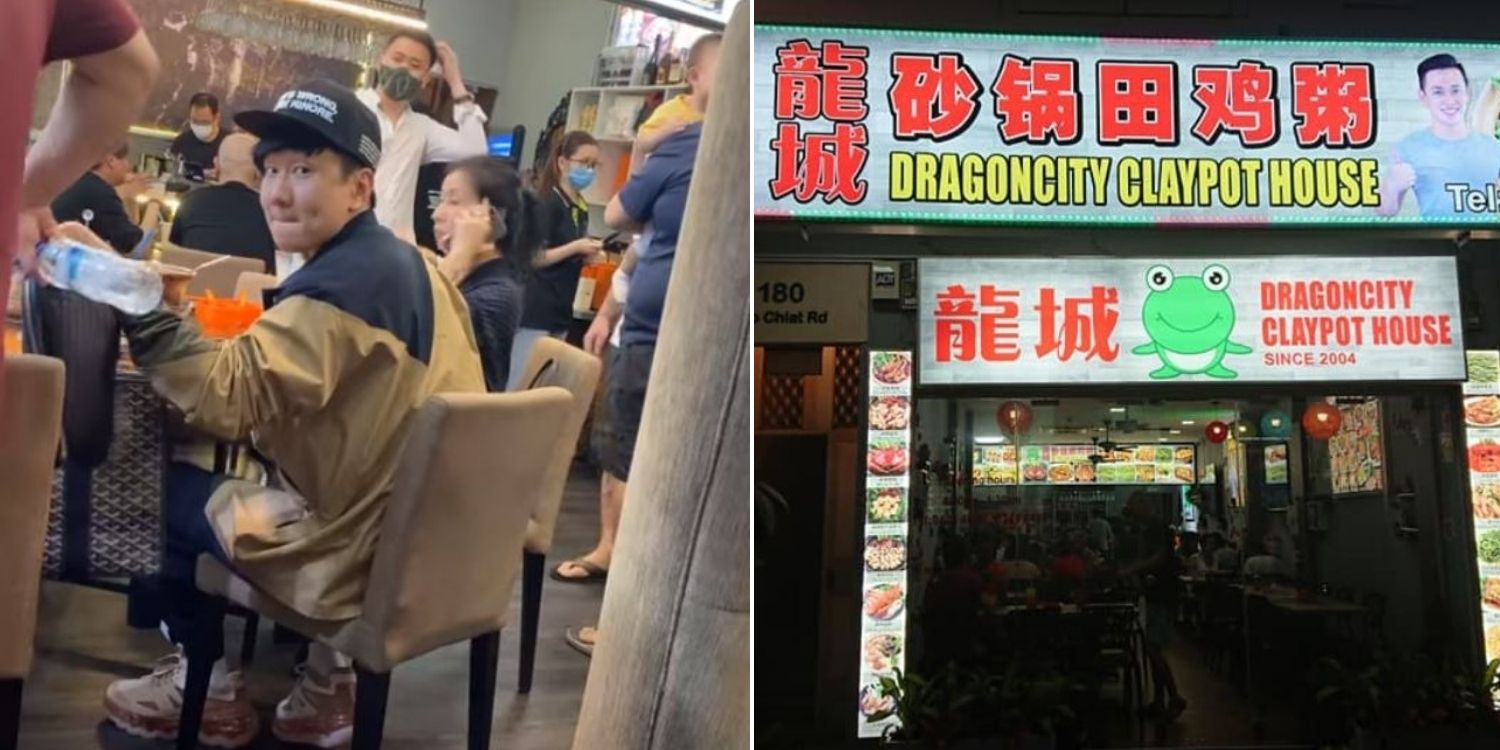 Celebrities sometimes seem like they’re in a totally different world from us, so it’s surreal when we see them up close in the ordinary places we frequent.

A woman was lucky enough to come across local pop superstar JJ Lin at a Joo Chiat Eatery, and managed to take a sneak video of him and local singer A Du. 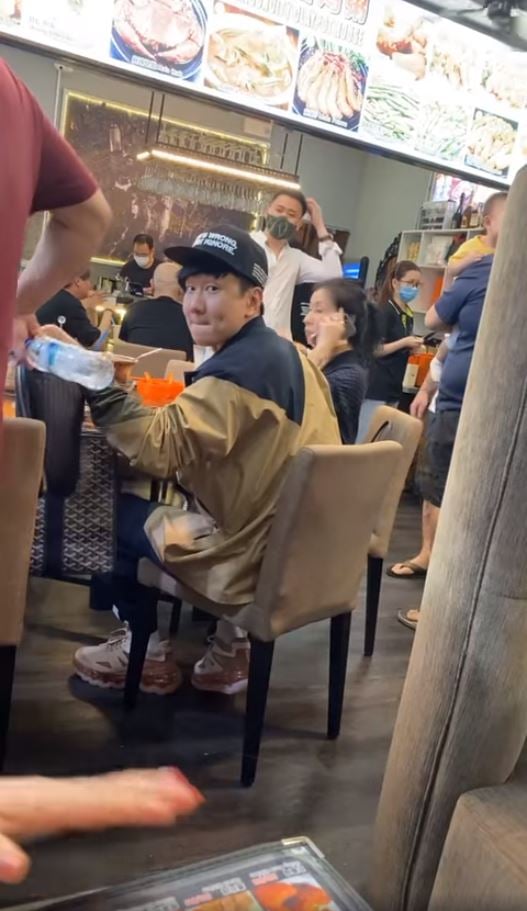 Posting her video on Facebook, she said it’s too bad she couldn’t take a photo with him as she didn’t want to create a scene.

However, some netizens were more than concerned about his prominent dimples in the video, saying it made him look handsome.

In the video posted on Sunday (21 Feb), JJ is initially seen from the back, enjoying a meal DragonCity Claypot Frog Porridge. 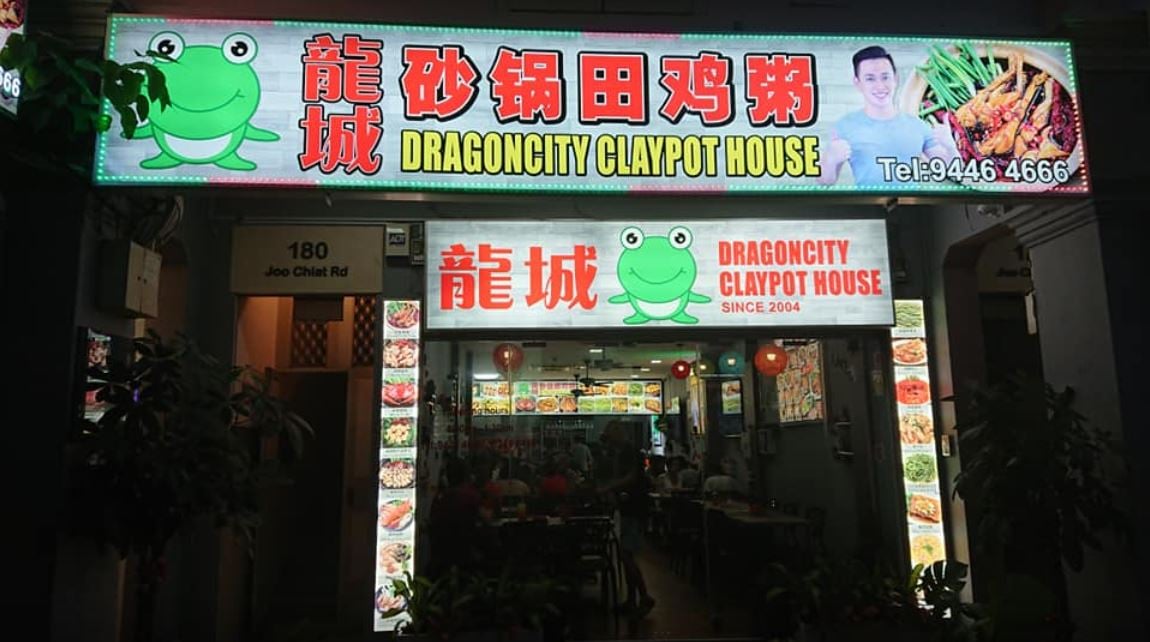 It’s located at 180 Joo Chiat Road, and we can bet that it’s business will be better than usual now.

Another man in a red T-shirt and cap can be seen standing behind JJ, giving him a shoulder rub. 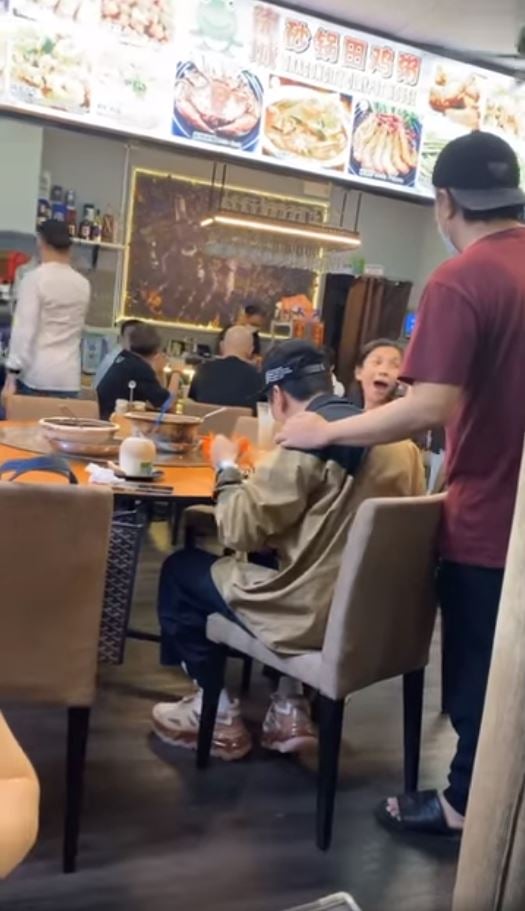 The OP identified the other man as A Du, another well-known local singer who’s close to JJ.

Seeing his friend behind him, JJ moves to pick up his huge bag from the empty seat next to him.

Obviously, despite his status as a superstar, homeboy JJ has manners, and intended to clear his bag so A Du could have a seat. 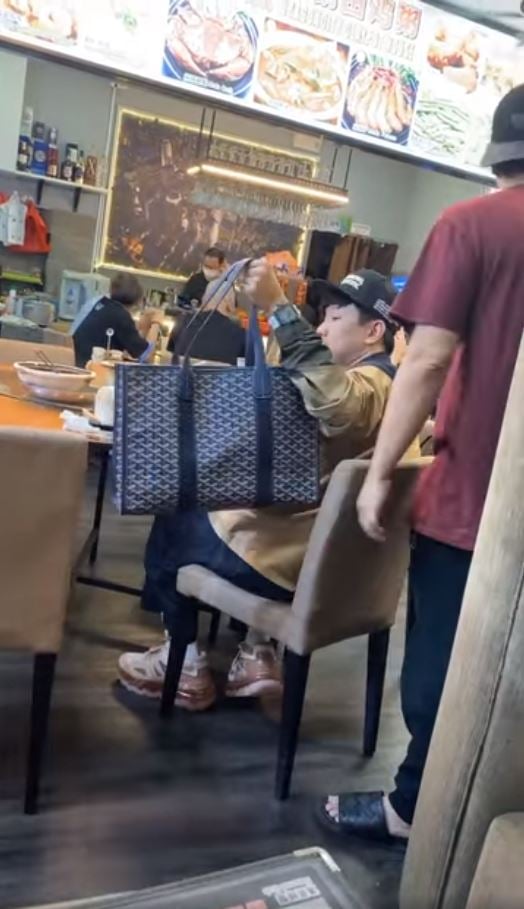 What one netizen (perhaps jokingly) observed, is that his bag seemingly really can’t be put on the floor.

However, she admitted, that’s obviously not the point.

Funnily enough, instead of taking the seat, A Du turns away, seemingly acting dao in response. 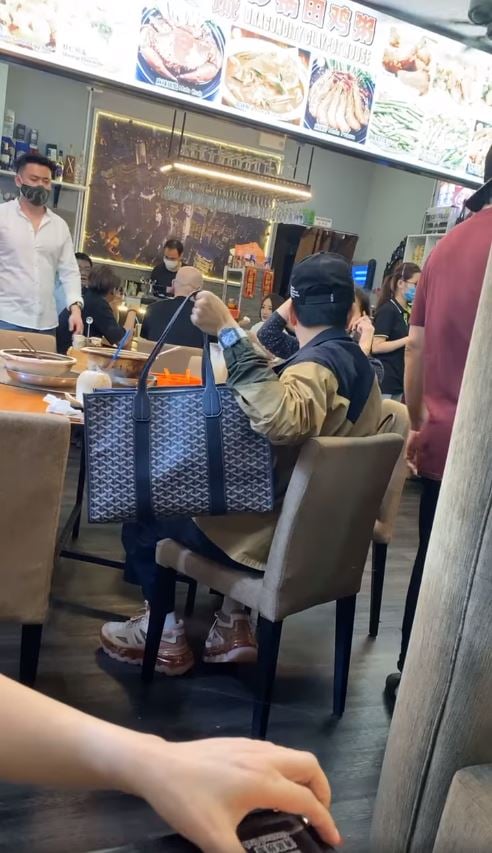 JJ then turns and looks at A Du, seemingly to say, “bro, you taking the seat or not?” It’s at this point when JJ notices the phone pointed at him, and makes eye contact with the OP for an electrifying second. She must be replaying that look in her mind all the time now, when a global superstar had eyes only for her.

As quickly as it started, it ended, and JJ turns to somebody seated on his right, while putting the bag back on the seat. After picking their jaws up from the floor, some netizens started making other observations about the video, such as JJ’s pronounced dimples.

One commented on how it makes him look handsome.

Another netizen noted his watch, saying it’s a “man’s dream”.

Apparently, the watch that JJ is wearing is a Richard Mille.

JJ is a big fan of the Swiss brand, judging from his social media posts. He also attended its launch party in Taipei in 2017. 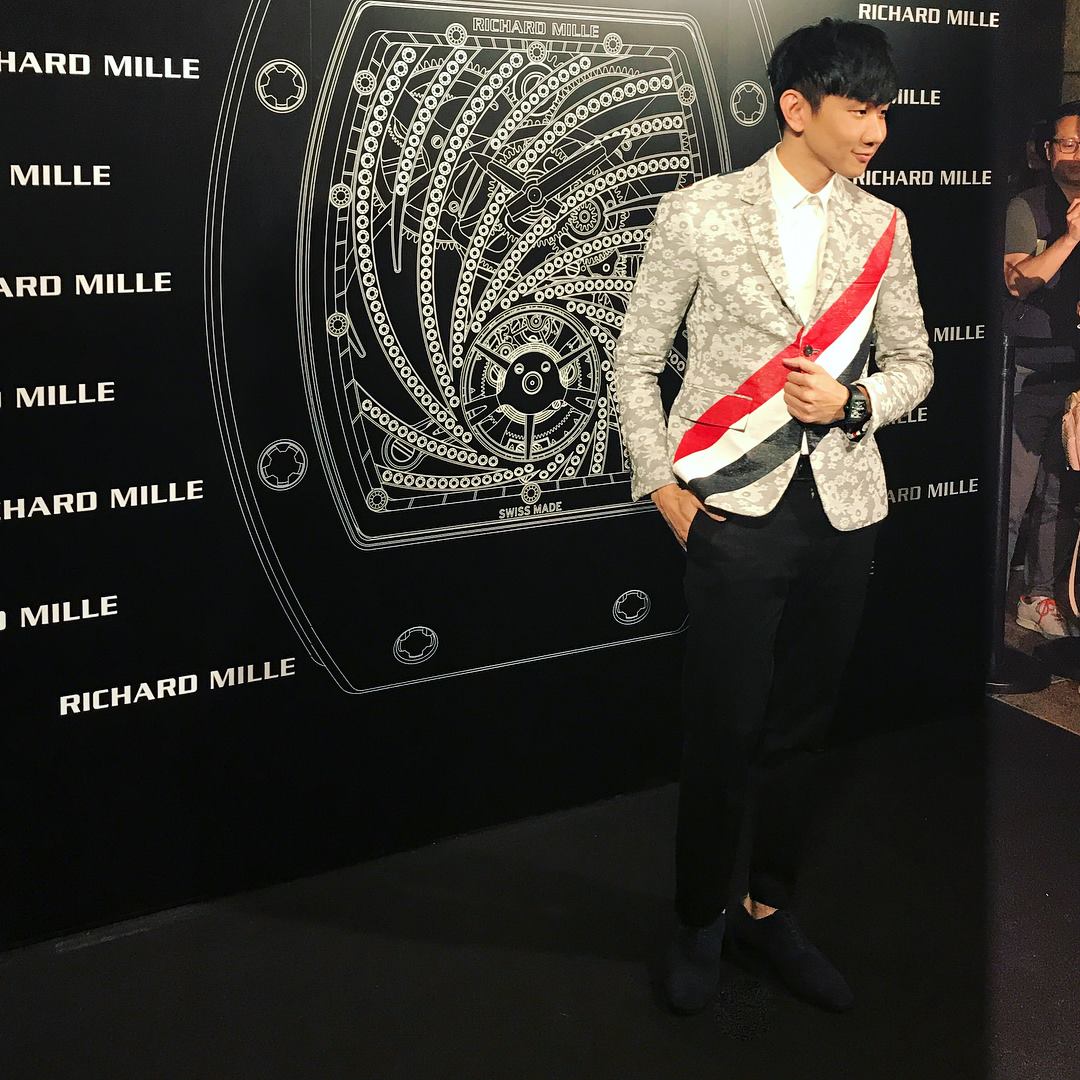 One netizen, however, urged the OP not to take sneak photos.

Though such videos may intrude into the privacy of celebrities, the OP obviously couldn’t resist as she was near to a bond fide megastar in the flesh.

Though the video clip was short, it obviously doesn’t matter to fans, who’ve shared it widely side it was posted.

Not only was the public treated to the sight of not 1, but 2 regional celebrities, we also saw JJ get amusingly and unintentionally snubbed by A Do.

Since he’s now back in Singapore for Chinese New Year, you might see him out and about in town if you’re lucky. 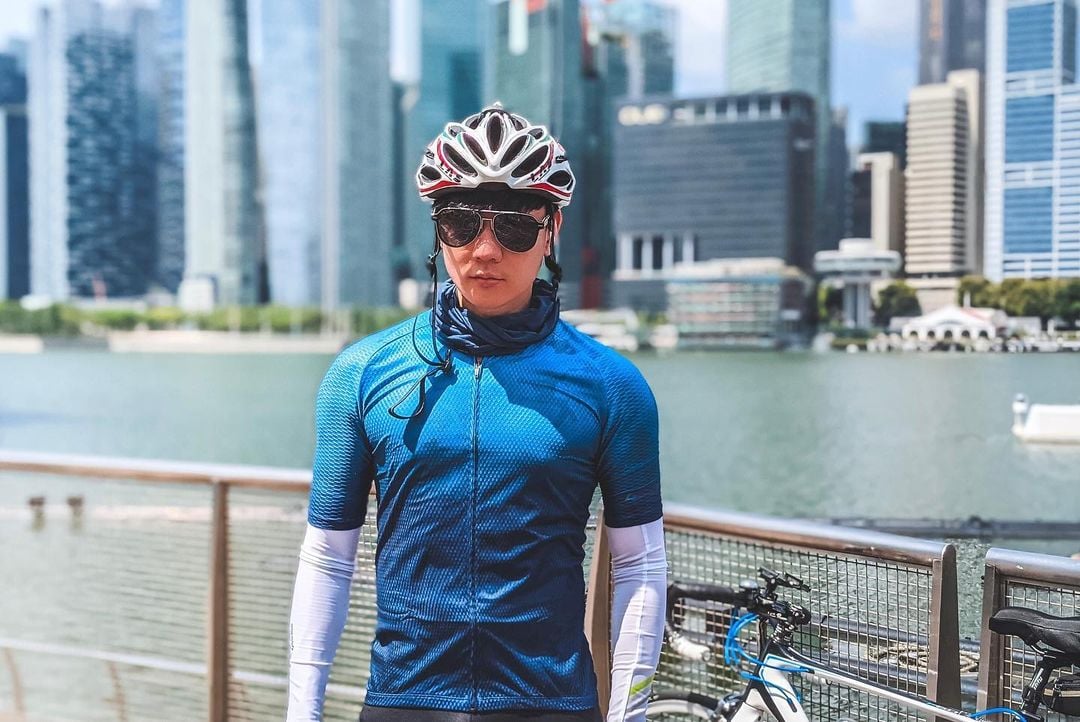 If you do see him, don’t forget to contact us or tell us in the comments below!