Violence should never be the answer.

Entertainment Lawyer Had Apologised For Incident But Denied Assaulting Employee

Update (26 Apr, 8.19pm): Mr Seow has made a statement regarding the incident on Facebook. He explains that he sometimes gets worked up due to the stress of managing 3 companies.

His full statement is available here:

On 25 Apr, 2 videos were posted on YouTube, resurfacing matters which took place in my office last year.

I am unsure what the people who continually post edited sound clips and videos are trying to achieve.

I had admitted that there was an issue in my office last year, and will leave the police to reach their findings.

Being an entrepreneur is never easy and juggling between finding the work, feeding people and paying salaries on time is a constant struggle.

As someone who has 3 companies to manage, I do get stressed up. It’s not an excuse but it’s been a year and the relevant people have made peace and wish for this to be behind us.

I hope to find closure with this issue soon, so I can move on with my life after my mistake from a year ago, so that the people who are constantly and conscientiously seeking to damage me can finally also, rest peacefully. A slew of shocking CCTV videos were uploaded on Friday (26 Apr), depicting a truly disturbing altercation in an office setting.

Here’s the 6-min clip in full by Sure Boh Singapore. And a trigger warning for violence as the altercation does get pretty intense at parts.

A second YouTube clip depicting a confrontation prior to this event is available here:

We summarise the case below.

Backs into office in heated scuffle

The first video begins with a loud confrontation between Mr Seow and a female dressed in a white top and black skirt. We notice a time stamp of 17 Apr 2018, at around 5.54pm in the right corner of the CCTV footage.

They are seen backing into the centre of an office, to the shock of their colleagues — who quickly step in to mediate the situation.

A female voice is overheard in the background repeating “Sam, Sam, Sam, slow down” in an attempt to calm him down.

You beat me? How dare you beat me!

Both of them engage in a scuffle next, as Mr Seow can be seen slapping the female staff once, before she retaliates by flinging his arms away with force.

Other colleagues try to calm him down

3 females staff members exit a separate room and enter the centre of the office. A lady in white attempts to break up the fight and asks Mr Seow,

Mr Seow replies that the younger female had “beat” him. She rebutts that he “kept attacking” her.

The argument escalates as 2 female staff members and a male colleague attempt to hold Mr Seow back, but to no avail.

Tensions run high despite attempts to de-escalate the situation

Unfortunately, the CCTV footage doesn’t capture in full what happens to the girl in black and white.

But Seow emerges from behind the wall with a male colleague wrapping him in a bear hug, to the stunned silence of the rest of their colleagues.

As Mr Seow repeatedly gets worked up and his colleagues struggle to keep the pair apart, this tussle continues for about a minute more.

Lady in white gets shoved to the ground At the 3-min mark, the same brave lady in white steps forward to tell Seow impassionately,

You can say her, but then don’t do fighting here.

Seow continues to assert that he was hit first by her, as his colleague reminds him not to push her in return. She firmly tells him,

The verbal altercation between the two soon turns physical as he appears to shove her on the ground after she continues to tell him to stop. 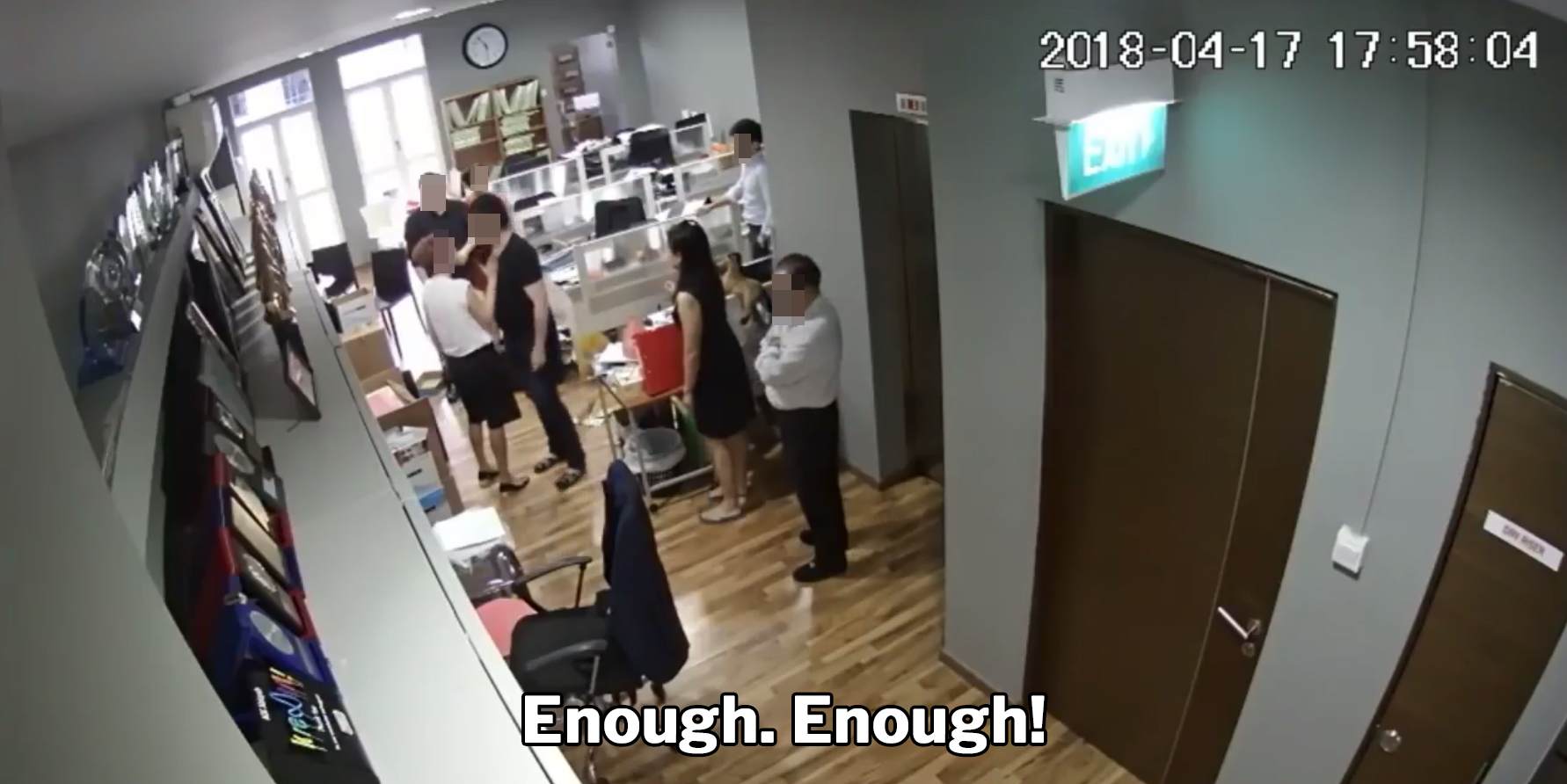 As everyone attempts to recover from the shock of her sudden fall, Seow appears to continue shouting at her as she’s sitting on the ground, stunned. The rest of his colleagues stare at the unfolding scene in muted terror. Two males try to restrain Mr Seow, but the pair continues to argue after the lady in white gets up.

A heated argument ensues in Chinese, peppered with Hokkien vulgarities for the next 2 minutes. The gist of it involves Mr Seow reasoning that since ‘Lady in White’ has been in his employ for long time, he felt that she should have sided him.

Finally, their colleagues manage to separate the pair to opposite ends of the office. The lady in white is shown the door, while Mr Seow gets taken away to “sit down” and “calm down”.

Could be video from 2018 fight

Mr Seow had received criticism after an audio recording of him allegedly assaulting 2 former employees in May 2018 surfaced.

Police reports were filed and Mr Seow fielded a press conference on 16 May 2018 to apologise for his actions. He admitted to slapping his niece but attributed it to a “family dispute”. As for the allegations of the female staff member, he denied throwing a stapler at her and making her “bleed”.

Police reports withdrawn in May 2018

However, the police reports were withdrawn after Seow alleged that his 19-year-old employee had been “instigated” to release the clips to smear his reputation.

The 19-year-old staff member involved later released a signed statement to prove she had indeed been misled, and had since resolved her issues with her ex-employer.

As for whether the clips released are new, or the visual representation of what went down in the 2018’s dispute, we are unable to verify that at the moment.

However, we do know that violence – whether verbal or physical – should never be the answer to anything, especially in the workforce.

On 17 Apr 2018, an incident involving Mr Samuel Seow and his niece – who was working for him at the time – went viral.

Following that incident, a voice recording was leaked to the public hinting that Mr Seow had used physical force on his niece.

This led to a police report for assault being filed by his niece. While Mr Seow also filed a police report on his niece for apparently retaining confidential company information despite being dismissed.

However, he apologised to his niece and family on May 16 in a press conference.

His niece also withdrew her allegations in a letter to the Law Society. She stated that she has “resolved her issues with Mr Seow directly” and wished to “withdraw all allegations against him”.

While it seems that Mr Seow and his niece resolved things rather amicably, another former employee also complained about Mr Seow.

This was what The Straits Times reported in April last year.

Interestingly, we couldn’t find that post after looking through his Facebook profile at the time of writing.

This employee did not press charges as on Mr Seow as there was a lack of evidence. He seemed to recognise that fact when he told TODAY that she did not tell anyone and no one said anything.

Could they have been hiding information as they were afraid of the man that owned the company? We’ll have to wait for his side of the story to find out.