UPDATE (23 Jan, 2.48pm): The AGC has responded to Mr Li Shengwu, as reported on CNA. According to them, his refusal to appear before the court indicates that he is aware of the lack of merit in his defence.

We have included a summary of the AGC’s reply below.

Li Shengwu, nephew of Prime Minister Lee Hsien Loong, announced on Wednesday (22 Jan) that he refused to continue taking part in the court proceedings against him for allegedly scandalising the judiciary.

Essentially, he’s nope-ing out of the prosecution altogether.

AGC’s conduct during case was “unusual”

In a post on his Facebook page dated Wed (22 Jan), Mr Li, who is an assistant professor of economics at Harvard University, detailed some recent happenings in his case, which has been ongoing since 2017.

In that time, the AGC has submitted “thousands of pages of legal documents over one paragraph on social media”, he said.

He then accused the Attorney-General’s Chambers (AGC) of acting unusually throughout the case. 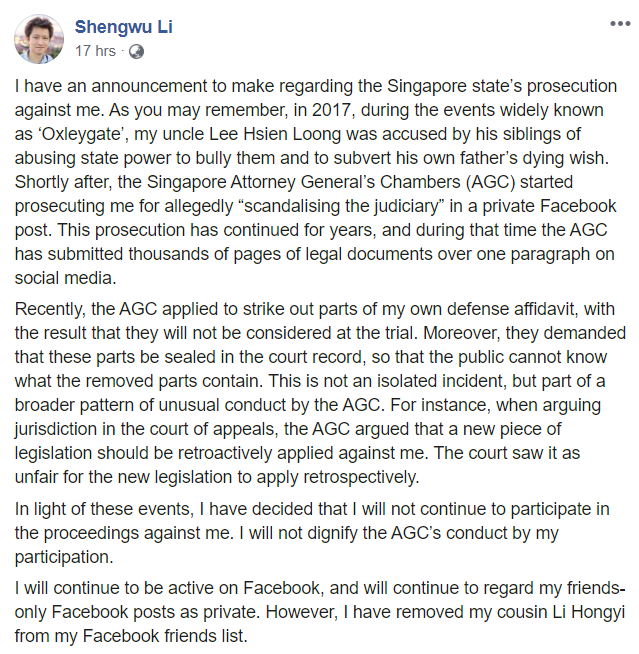 This extends to the AGC’s attempt to apply new legislation retroactively to him – however, the courts refused to uphold AGC’s argument and found it unfair.

The AGC also apparently applied to remove parts of Mr Li’s defense affidavit, which means not only will they not be considered for the trial, but they will also be sealed in court record.

These events have culminated in Mr Li announcing that he will refuse to continue participating in the case altogether. Mr Li appears to have had enough

Mr Li will likely be forfeiting his right to defend himself, but it appears the man seems to have had enough.

He could just leave it to his lawyers to conduct his defense without him. However it seems, given the way he’s phrased things, that he will not be participating in any capacity.

It’d be pretty hard for his lawyers to defend him if he’s unwilling to give them instruction. Therefore, we feel pretty confident in assuming that he intends to discharge their services and simply ignore the case.

If this happens, Mr Li will likely be tried in absentia, for which there is some precedence.

You can be sentenced without being present in court

Simply refusing to take part in your own court case is unusual, but not unheard of.

They take place when the defendant is not present in court to defend himself, but the court nonetheless allows the prosecution to continue.

It’s still considered a fair trial since the accused has been given a chance to present his defense, but elected not to.

In Singapore, some may remember in 1994 an American professor named Christopher Lingle was tried in absentia for making comments very similar to Mr Li’s.

Both Mr Lingle and Mr Li said something to the effect of claiming that the Singapore judiciary was “pliant”.

AGC may continue their prosecution of Li Shengwu

The AGC has now responded. They state that Mr Li’s refusal to appear before the court is indicative in and of itself.

They stated that Mr Li was aware that they were looking to cross-examine him, and that he does not dare to stand up to their scrutiny. In particular, they noted that this is “a clear acknowledgement that his defence has no merits”.

They also noted that “if Mr Li has nothing to hide, he should make himself available for cross-examination and answer the questions posed to him on oath.”

Furthermore, if he truly believes that he is innocent, he should defend himself. That he has refused to, according to the AGC, “shows what he really thinks”.

We do wonder if they really know what he’s thinking.

One thing we can confirm for now however: Dr Lee Wei Ling has liked Mr Li’s post.