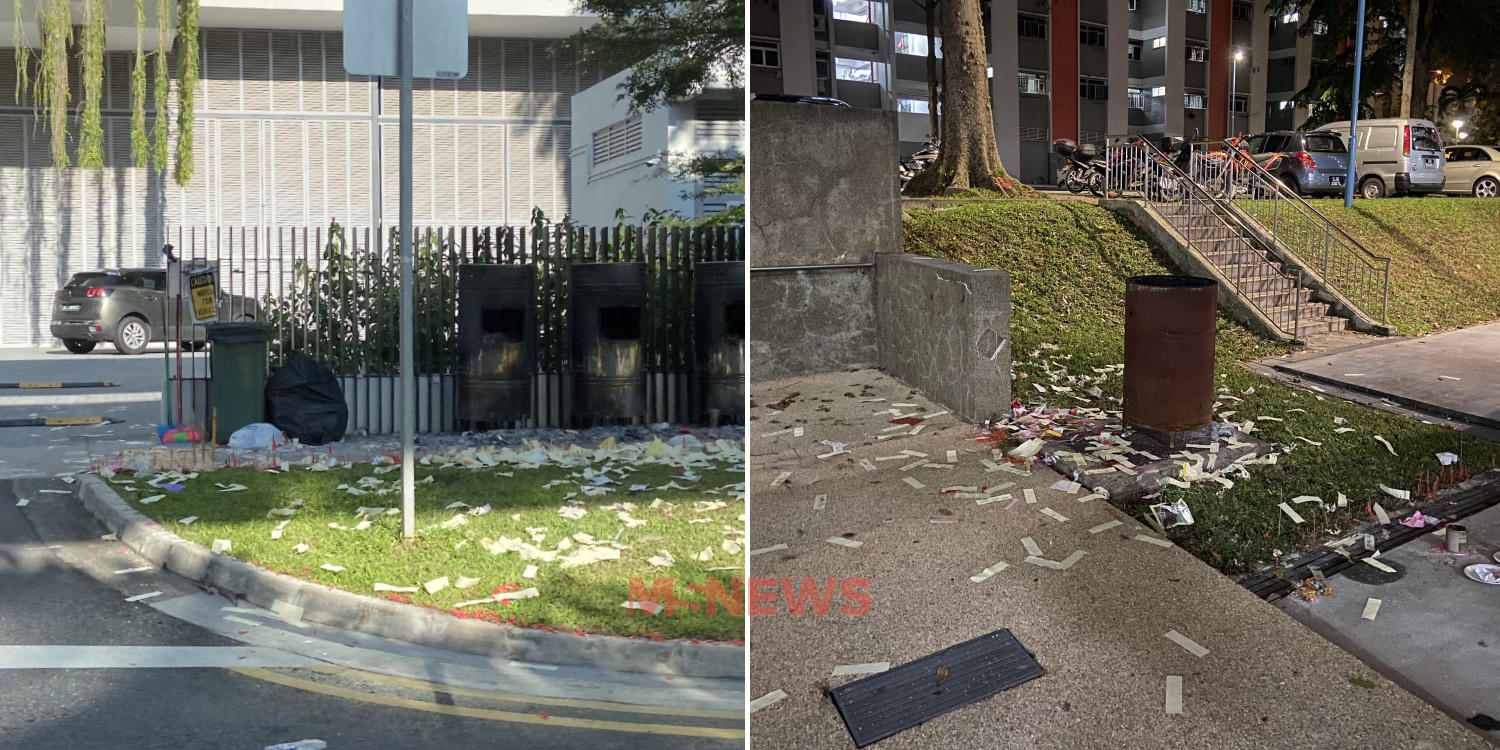 Singaporeans have grown to respect the customs of various religious groups.

The burning of offerings is a common sight during the Chinese Lunar 7th Month, where people often bring joss paper and plastic bags for the occasion.

On the last day of the 7th month (16 Sep), pictures of litter left on footpaths after the burning of offerings have surfaced on social media.

A concerned netizen took to Facebook to urge residents to avoid irresponsible littering. 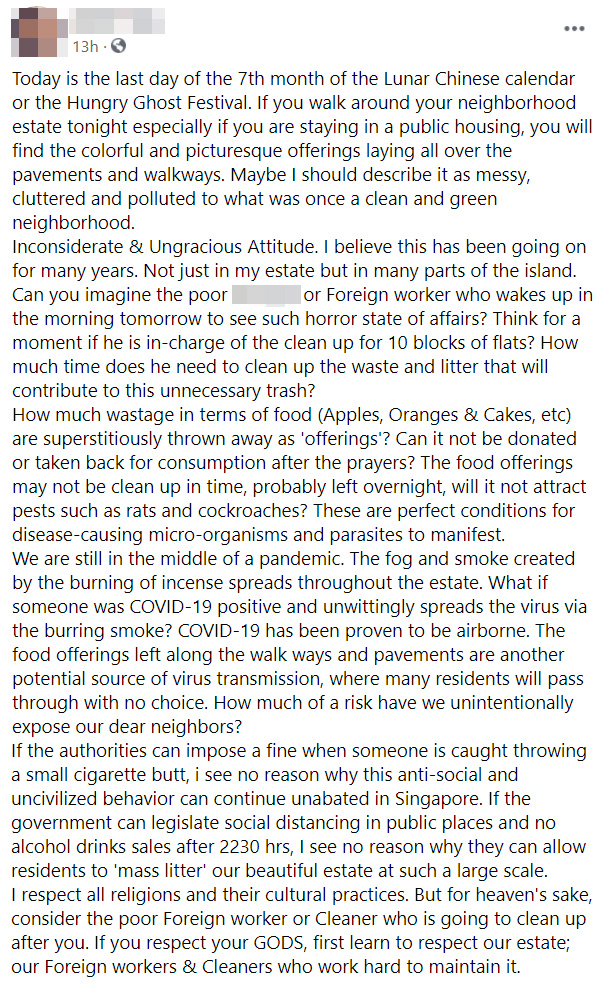 She asked residents to spare a thought for the cleaners, who will end up going through a lot of trouble to clean up the litter.

In the Facebook post, the OP describes the litter as messy and cluttered. She added that her “once clean and green neighbourhood” has been “polluted”.

The pictures reveal that litter such as plastic bags and offering wrappers were left around the surrounding designated offering sites instead of being thrown in waste bins.

She says that the irresponsible littering will increase the workload of estate cleaners,

How much time does he (migrant worker) need to clean up the waste and litter that will contribute to this unnecessary trash?

An MS News reader shared pictures of how the 7th month aftermath looked like at Ang Mo Kio Ave 6. They show a similar sight of leftover wrappers and plastic bags left on walkways. 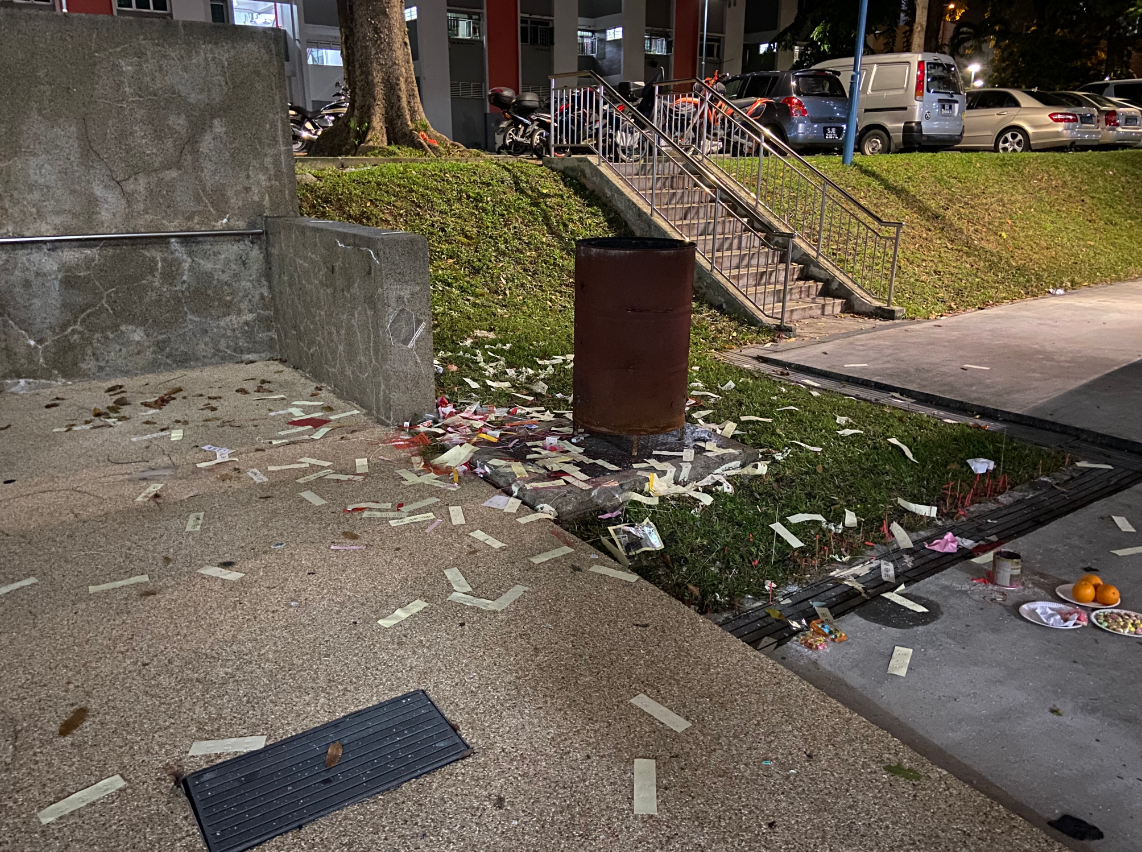 Plastic bags have also been left on public benches. 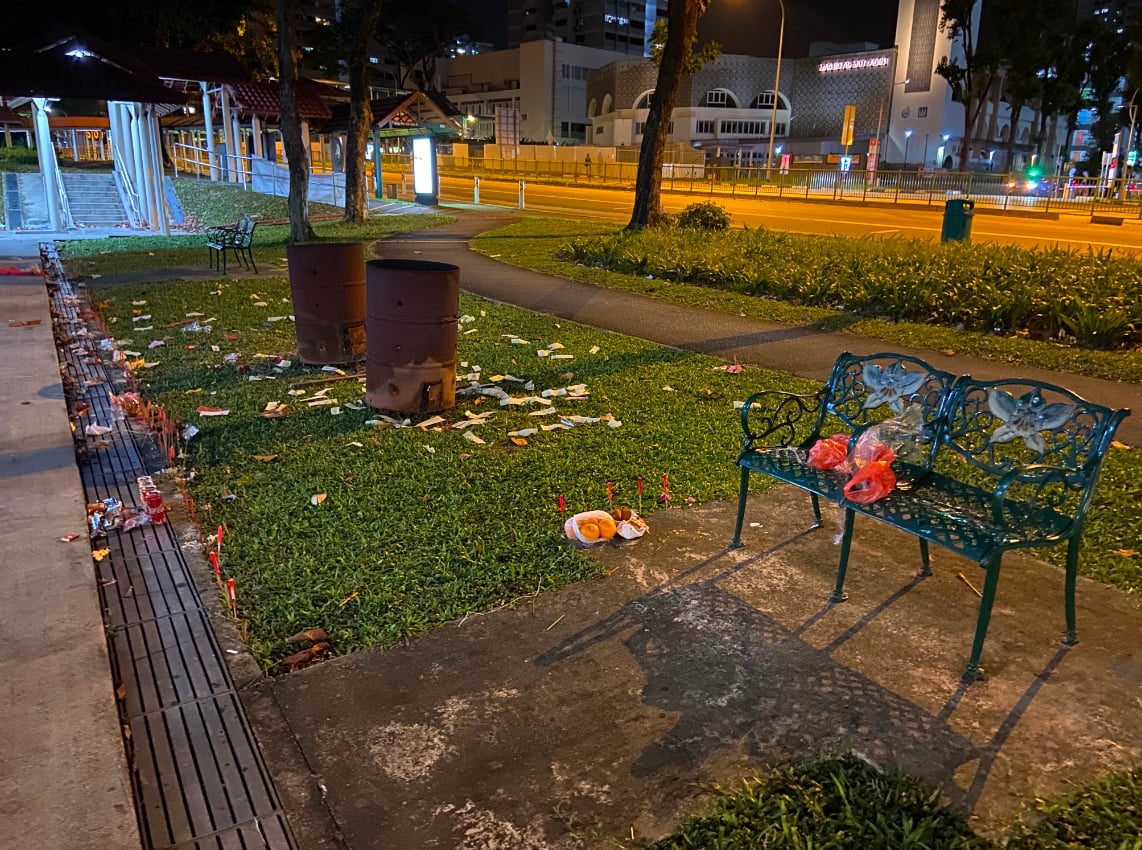 Jeremy, an Ang Mo Kio resident who saw the littering below his block, says,

I understand that the burning of offerings is for religious purposes, however the littering is very irresponsible.

The 19-year-old said residents do need to clean up the plastic bags and wrappers that were not burnt as offerings.

Jeremy added that a neighbourhood cat feeder told him community cats get sick during this period of time because of the trash. Some netizens have voiced similar concerns about the litter while others have pushed for tolerance.

A netizen concurred with the OP, saying that one must spare a thought for those who maintain our HDB estates.

Echoing the OP’s sentiments, this resident said she would clean up after finishing her offerings.

However, some netizens said that Singaporeans should be more tolerant of the religious practices of different groups, especially since it was the last day of the 7th month.

Meanwhile, one resident said we should treasure this practice while it lasts, as the next generation of Singaporeans may not be doing “this kind of stuff” any longer.

When carrying out religious practices in public places, Ministry of Sustainability and the Environment has this to say on their website,

The Government encourages members of public, including temples and residents, to practise graciousness and consideration for the environment and neighbouring premises.

They further advised the public to clean up after offerings have been made, and to use the designated pits provided by the Town Councils.

Respect for both religion & public spaces

While the ritual of burning offerings is a part of our multi-religious society, it is important to be aware that public spaces must be kept tidy and free of unnecessary litter.

After all, plastic bags and wrappers are not burnt as offerings.

When all of us spare a thought for the surrounding area and other residents, Singaporeans will be able to practice their own rituals without hindrance.