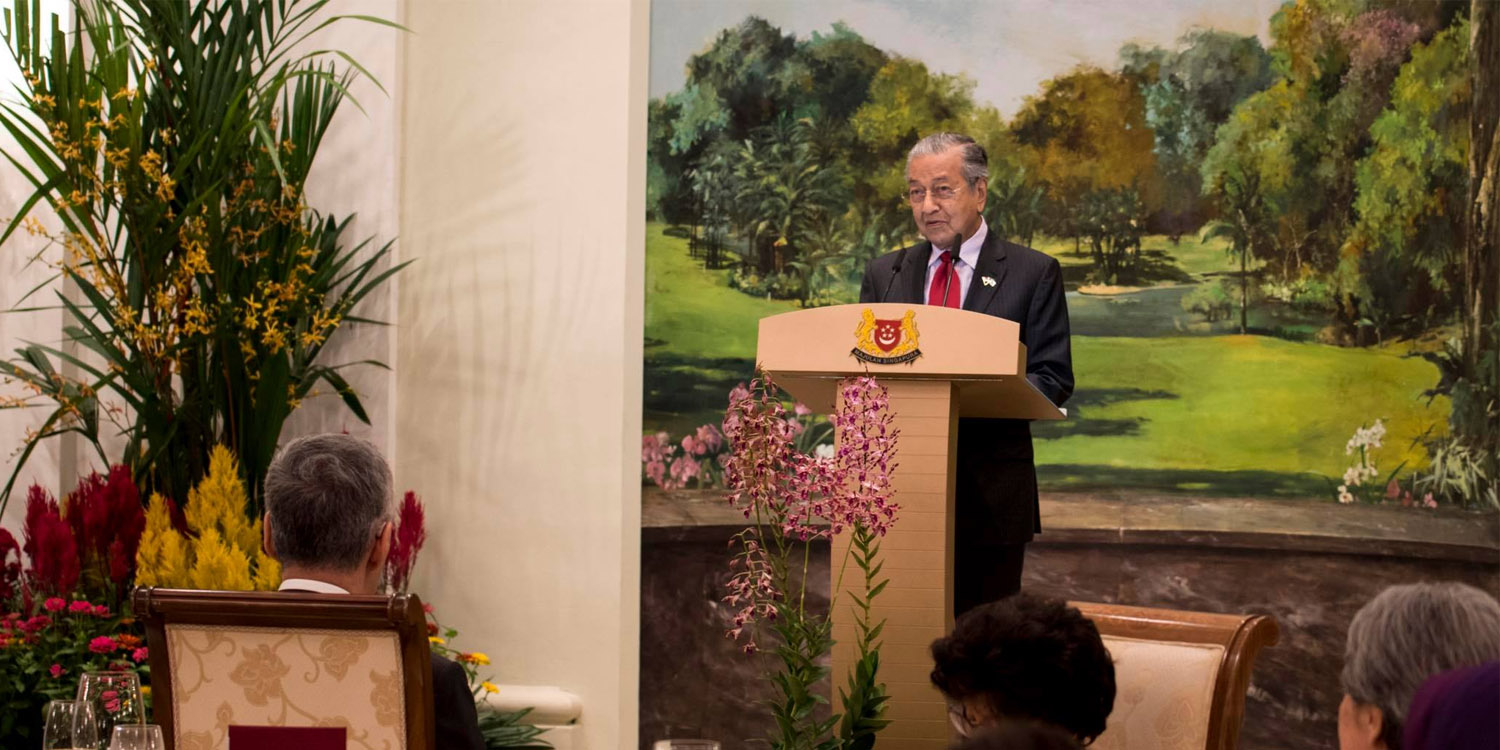 Dr Mahathir often divides Singaporeans. While some appreciate his taking over from Mr Najib Razak, others criticise his sometimes controversial statements about Singapore-Malaysia ties.

And the 93-year-old’s latest interview with Singaporean journalists will do little to change these polarising views of him.

If you’re a fan of his straight-talking ways, then you’ll be even more impressed by his decision to raise the water price issue to local press.

But if you think his policy proposals — ahem, crooked bridge — are nonsensical, then you’ll burst out laughing when you realise he still wants that bridge built.

Here are the biggest takeaways from his latest interview with the local press.

The 1MDB scandal undeniably brought Dr M to power in May — and he’s grateful to Singapore for its swift action on the matter.

Some people brought money belonging to 1MDB to Singapore and many people were paid out of money that was stolen. Singapore took action to arrest them, to charge them and all that, and also to return to us the money that has been stolen. That is cooperation that we appreciate.

2. He still wants that crooked bridge

20 years later, Dr M is as keen as ever on rebuilding the Causeway. And his solution is still a crooked bridge.

In addition to the crooked bridge, Dr M revealed that he would like to see more bridges between Malaysia and Singapore.

His reason? “It won’t hurt anybody.” Neither would the High-Speed Rail, but hey, what do we know?

Dr M knows that the falling Malaysian ringgit is a great way to attract Singaporean tourists. “The high value of the Singapore dollar (would be) beneficial for Singaporeans to Malaysia,” he said.

Admitting that there was natural competition between the 2 states, Dr M also pointed to many opportunities for collaborations. Maritime matters is one such area. “We can also look into how we can cooperate in our approach towards the problem of South China Sea, the free passage of sea ships and all that.”

But none of us really expected Dr M to leave Singapore without bringing up water prices. He told reporters that there was still a need to discuss the matter.

We have differences about interpretations and I think we will continue to have discussions at official levels and at the political level, and we hope that we can reach some agreement.

Singapore’s Ministry of Foreign Affairs later said that it wished to promote further discussions, so that each side could better understand the other’s position.

Dr M’s visit to Singapore marks his first trip here since being elected 6 months ago. He is here for the ASEAN ministerial meetings, which also involve foreign big wigs like Russian President Vladimir Putin.

Dr M should leave Singapore a happy man — NUS conferred a special honour on him for his outstanding leadership of Malaysia.

Singapore has also named a variety of orchid hybrid is to be named after Dr M and his wife Tun Dr Siti Hasmah Mohamad Ali. Named “Dendrobium Mahathir Siti Hasmah,” the flower is described as having “distinguished and well-twisted” petals with a mahogany colour.

In case you were wondering, the Dendrobrium Najib Rosmah does exist as well. We wonder which one’s prettier.