The article has been updated to reflect the new information as of 2 Sep.

When disagreements happen, violence is never the answer. As far as possible, we should always try to resolve issues without resorting to our fists.

A man allegedly confronted a 12-year-old boy over cycling on a certain path, which is part of the Park Connector Networks (PCN).

When the boy refuted that the Land Transport Authority (LTA) allows cycling on the path, the man said “don’t argue with me ah” and allegedly assaulted him, with a witness present to testify.

From pictures shown, the boy was left with a swollen right cheekbone, some bruising on his chest, and a mark on his left chin. 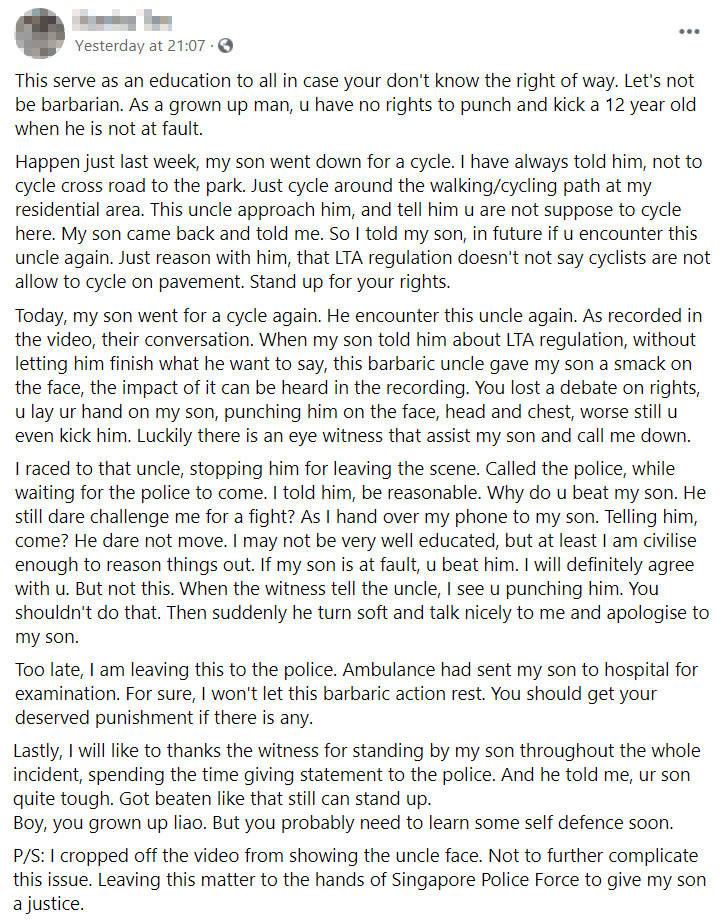 Thankfully, the boy is otherwise okay.

The man was jailed 5 days for voluntarily causing hurt to the boy.

Man argues with boy & says he can’t cycle on path

Apparently, since last week, the boy has been told by this ‘uncle’ that he can’t cycle on the path.

This is the path that the boy’s father says he was cycling on. It appears to be part of the Park Connector Network (PCN), where bicycles are allowed.

Regardless, the man appeared insistent. So the boy’s father told the boy to mention LTA regulations.

He did just that when he encountered the uncle again on Friday (20 Nov).

In a video taken by the boy which you can view here, the man can be heard telling the boy to “turn back”, because he didn’t want to see him cycling in the area. When the boy tries to bring up the LTA argument – “did you read LTA-” – the man appears to get agitated and interrupts him, saying “you don’t argue with me ah”.

Then a loud impact can be heard.

The man then says “want to argue with me ah? Take picture?” and grabs the phone, with the clip ending shortly after.

The boy’s father has cropped out the man’s face in the video.

The man allegedly continued to punch the boy until a witness apparently stopped the incident.

The witness also called the boy’s father down, who in turn called the police.

Following a confrontation where the man allegedly challenged the boy’s father to a fight, he eventually apologised after the witness told the man that they saw him punching the boy.

The boy was then taken to the hospital.

He posted some pictures of the injuries the boy apparently sustained. 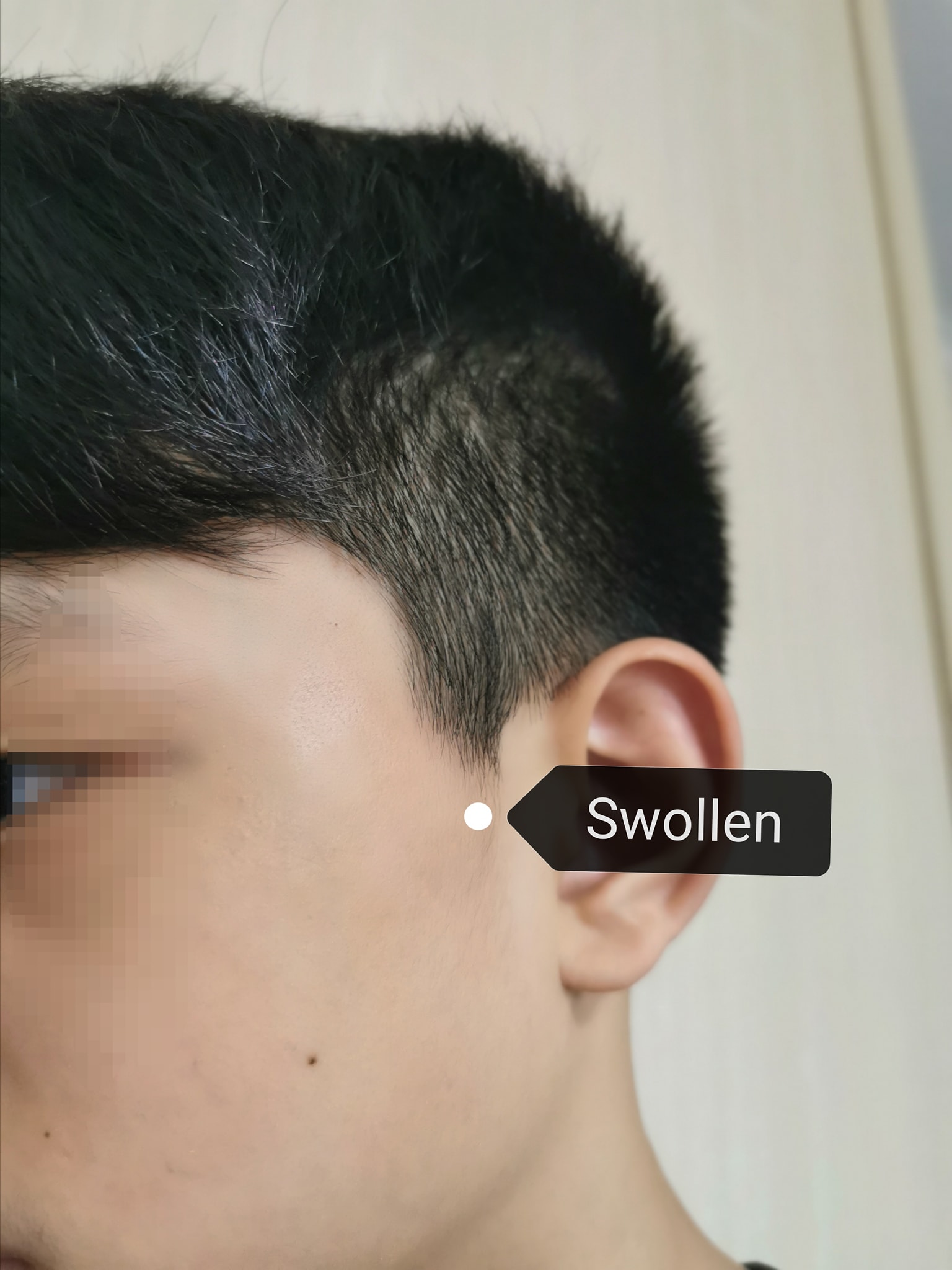 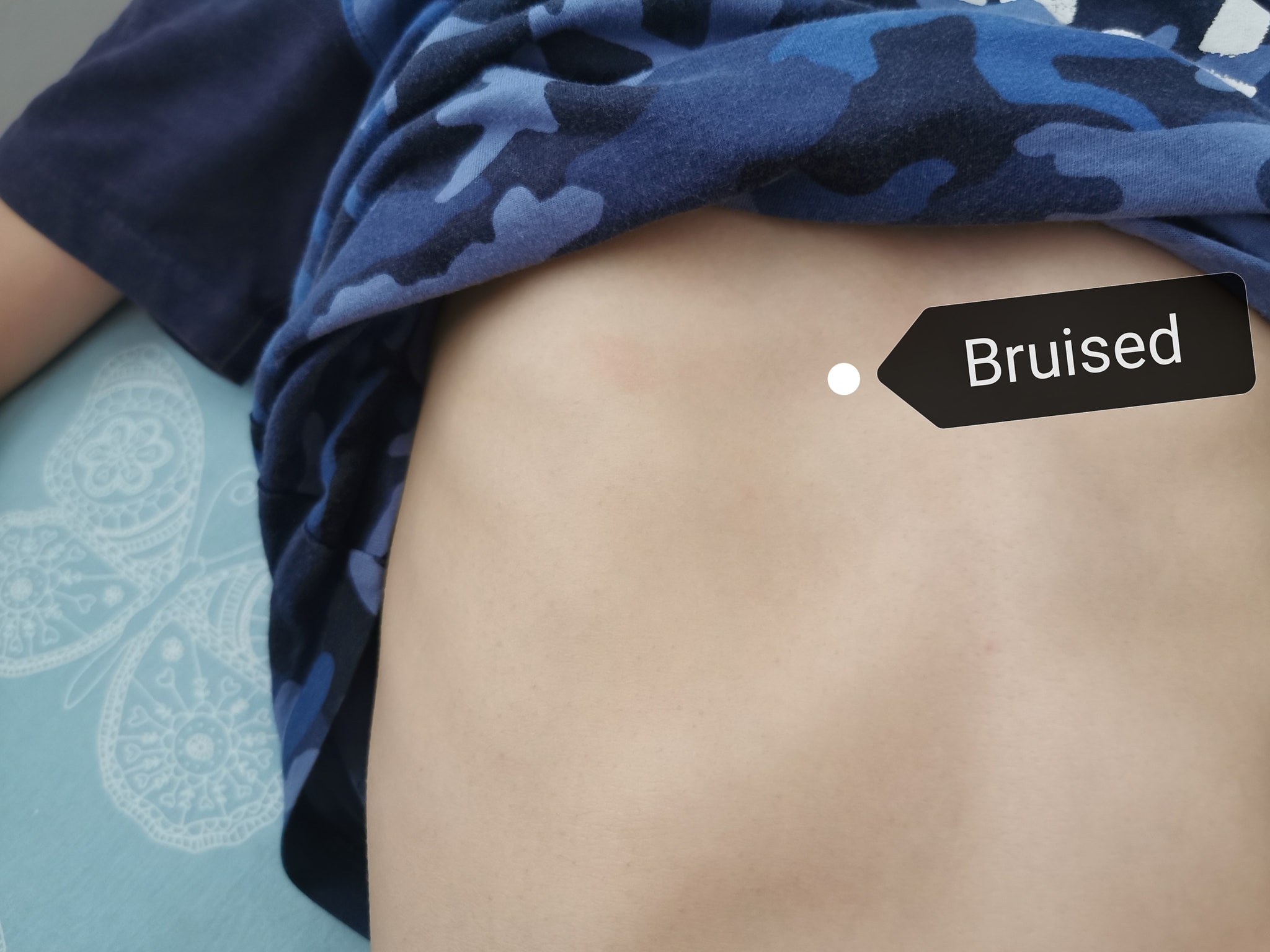 An abrasion is also seen on the boy’s cheek. 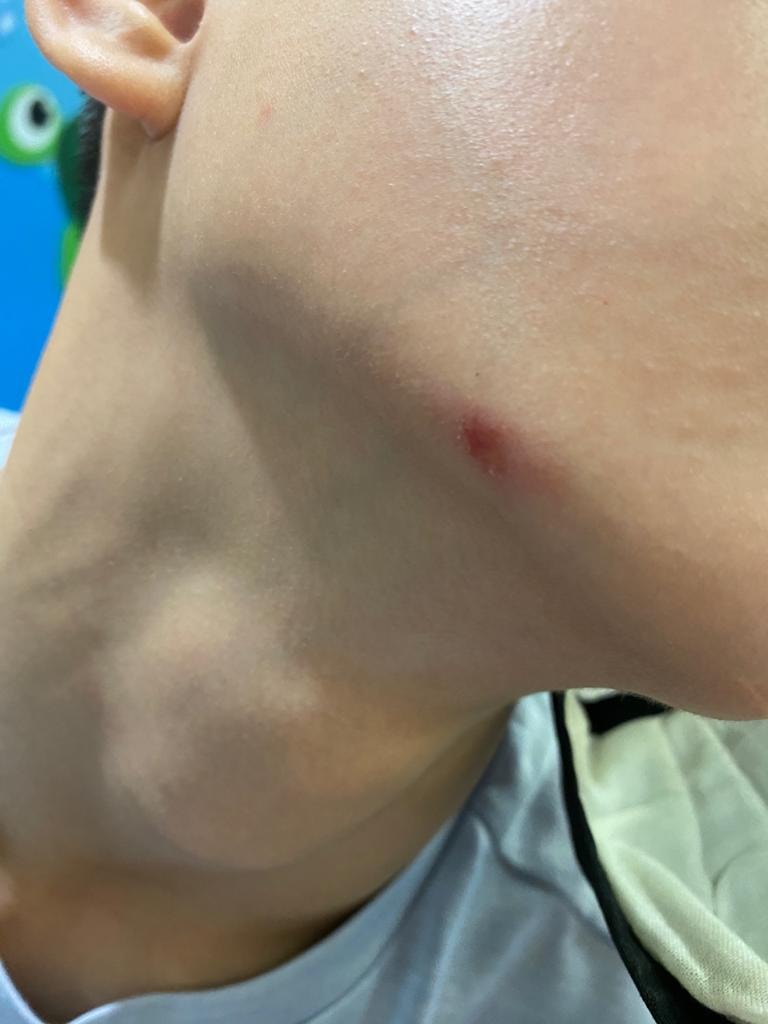 The witness apparently said that the boy was “quite tough”, able to stand up after he “got beaten like that”.

Hopefully he’s okay, because assault can leave psychological scars, not just physical ones.

TODAY Online reports that Chua Chek Yong was jailed 5 days for voluntarily causing hurt to a person aged under 14.

According to the report, the man had initially admitted to slapping the boy but not to punching him.

Chua paid $120 for the medical bills incurred thanks to the injuries he inflicted.

District Judge Janet Wang said that Chua wasn’t forthcoming with his actions until he realised that there was an independent witness.

He also taunted the boy’s father to beat him up, which displayed a lack of “genuine remorse”, she said, classifying the case as bullying.

However, DJ Wang noted Chua’s lack of previous convictions as well as his timely guilty plea.

As with any story told on social media, there’s always more than one side of the story.

That said, the PCN is in fact fine for cyclists to ride on.

We don’t know what happened before and after the clip, although of course if an assault occurred, the perpetrator is at fault. Violence is never the way to settle any disagreements.

The police will be better able to judge what happened than the court of public opinion, and they’re currently investigating the incident.