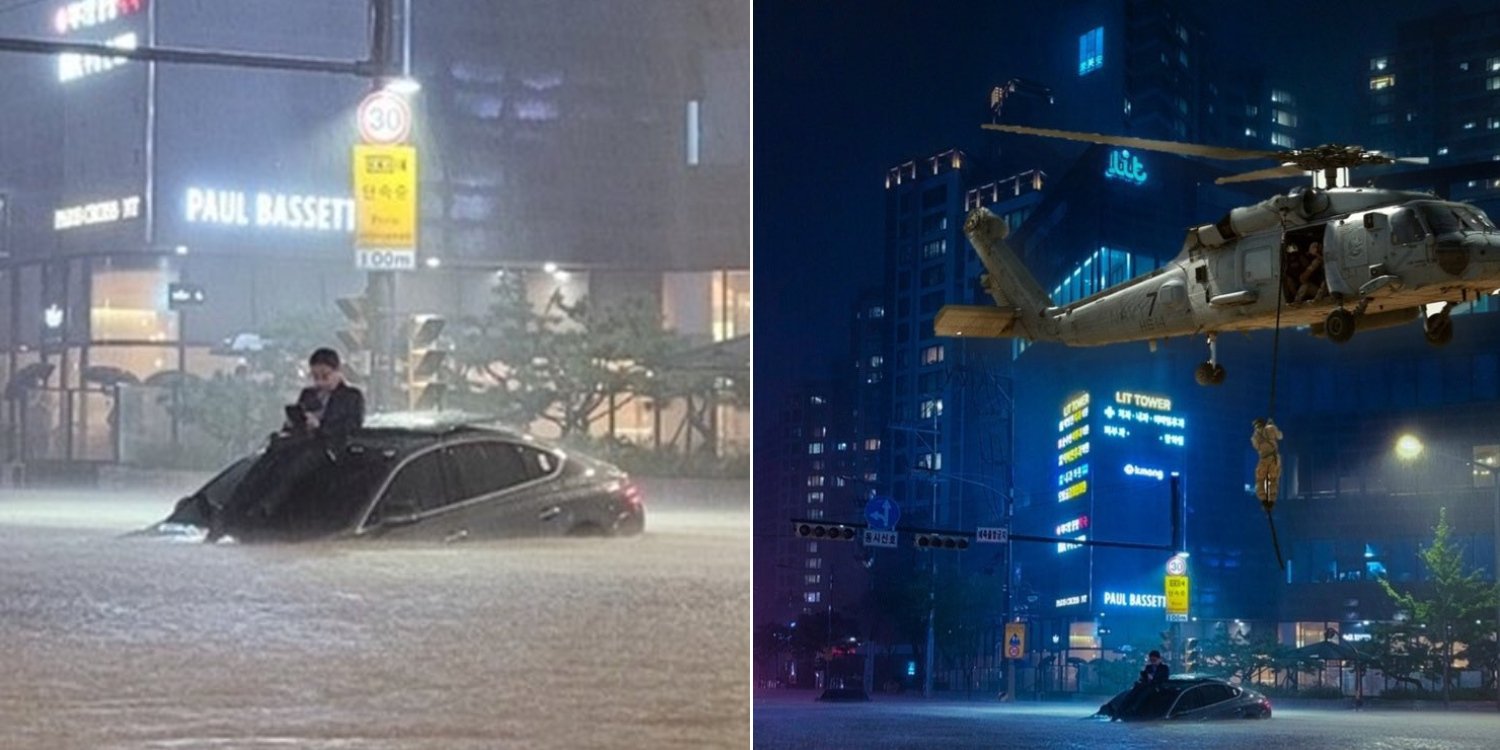 A level of calm we all wish to strive towards.

In the midst of this tragic and horrifying disaster, the internet still managed to find ways to entertain itself with memes.

The inspiration was this picture of a man chilling on top of a car in the city while surrounded by rising waters. His calm demeanour as he uses his phone in the pouring rain spawned a slew of meme edits, with many likening the photo to a poster for the next big South Korean blockbuster.

On Monday (8 Aug), a tweet showing photos of a man chilling on a car in the middle of a submerged road went viral.

The first picture shows the scale of the floods in Seoul as the water levels have risen to incredible heights.

Even a regular-sized sedan in the distance appeared to be almost completely underwater.

The next photo shows a zoomed-in version of the same shot, where we can get a better look at the man’s zen-like state. 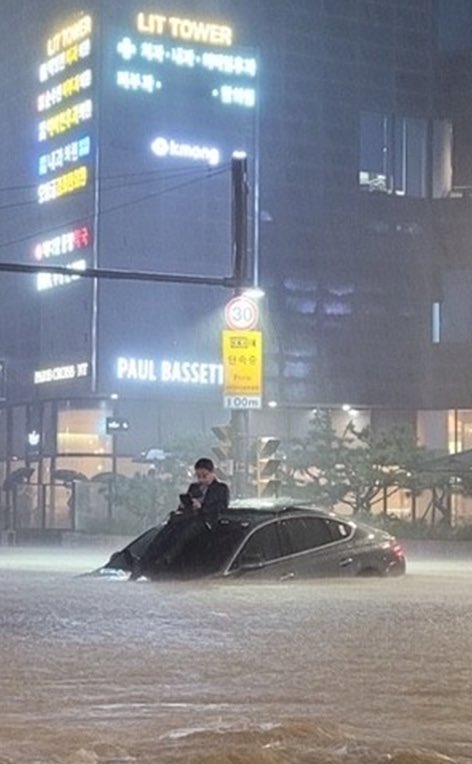 Despite the terrible situation he somehow landed himself in, he seems to be completely at ease as he casually scrolls through on his phone.

At least he seems to be making the best out of his situation.

After the first tweet went viral, other Twitter users shared more photos of the same man from different angles.

Here’s how he looks like chilling from the back. 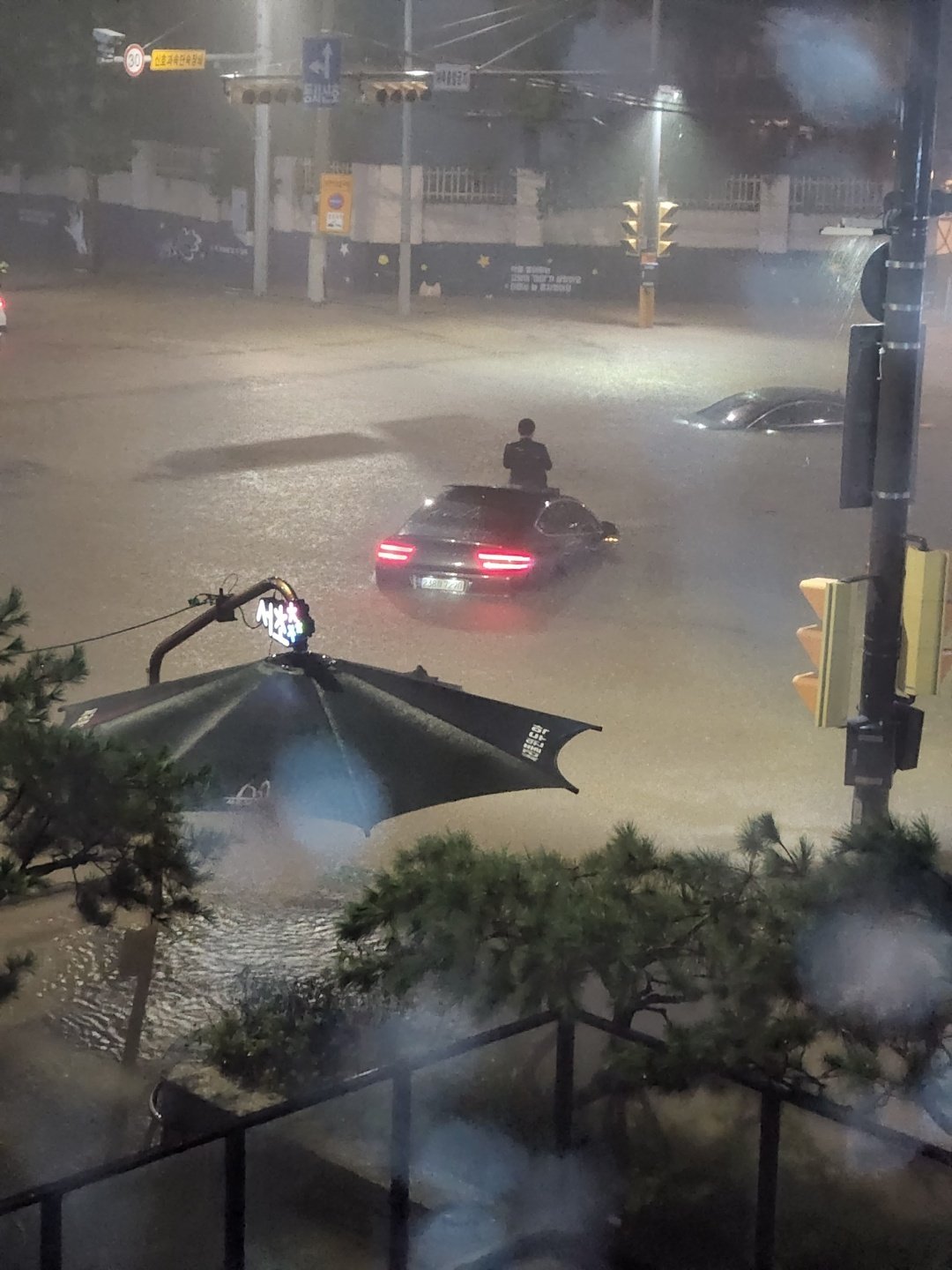 And here’s another shot of him taken from the side. 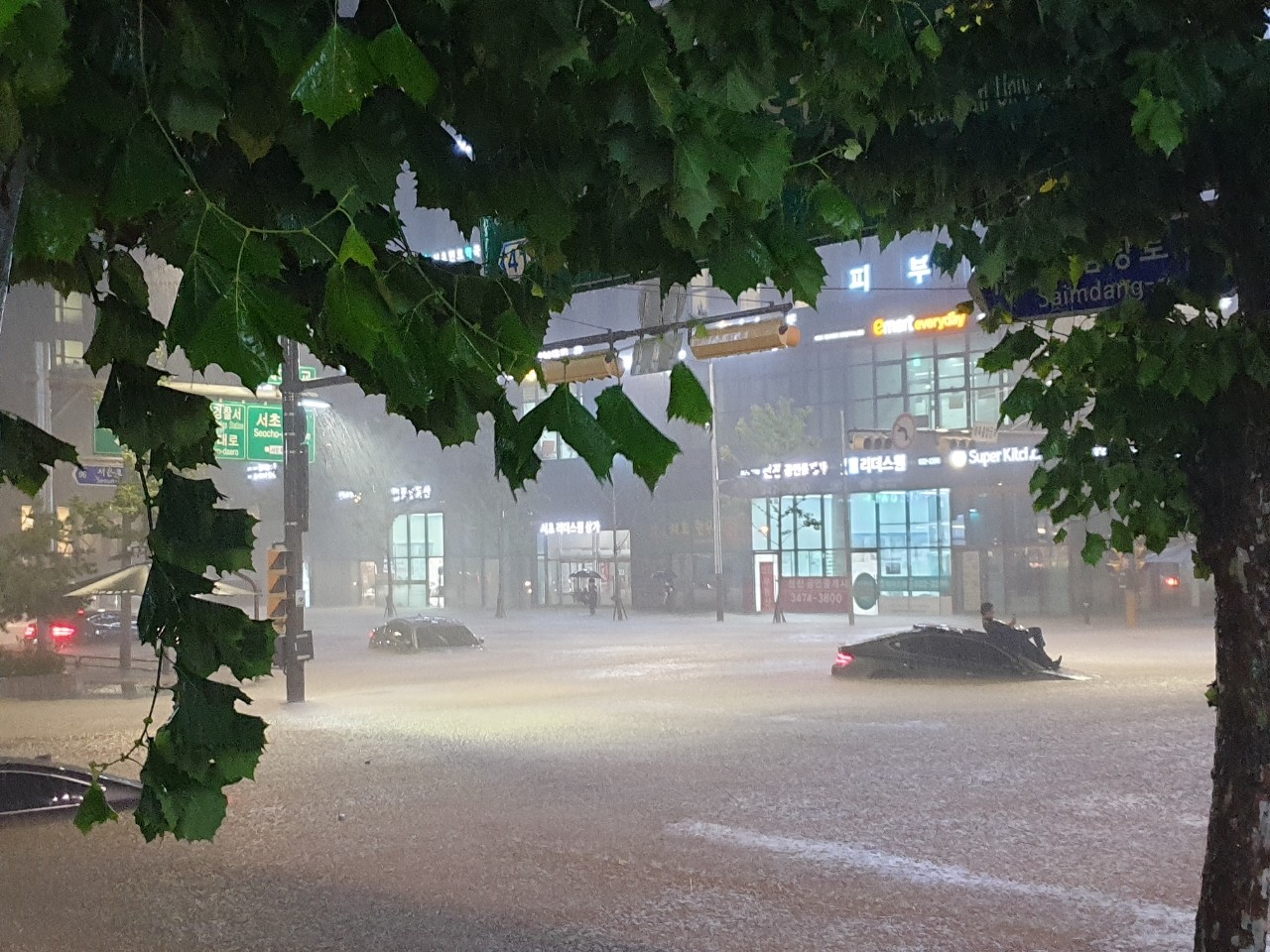 Interestingly, a photo from what appears to be the chill man’s point of view was also spotted amongst the Twitter replies. 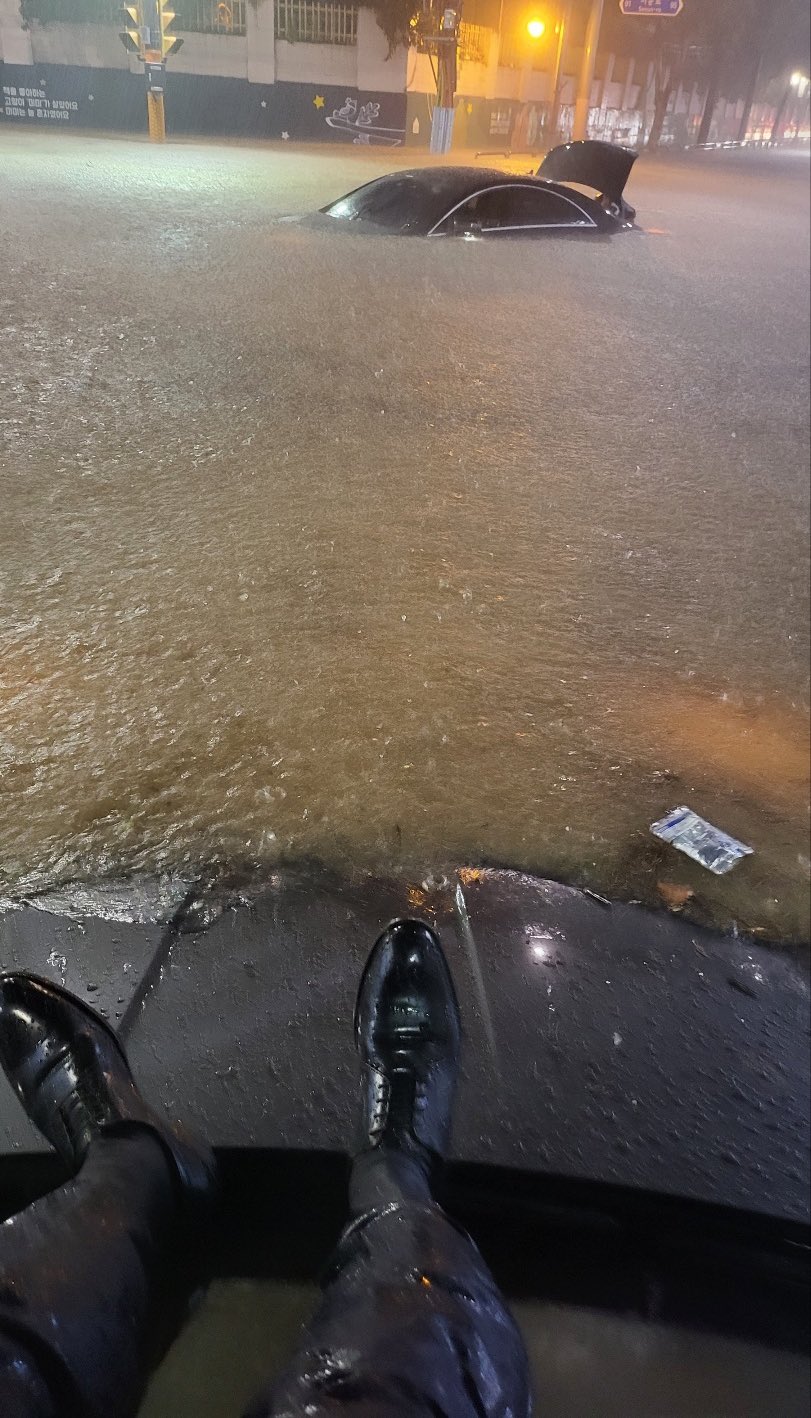 Judging from his pants and shiny dress shoes, he was likely on his way to or from the office when he found himself trapped in the flood.

Needless to say, the man definitely captured the imagination of the internet with his chill attitude.

Netizens spin man into a meme

As with any viral incident, the creative geniuses on the World Wide Web quickly got to work churning out memes.

This edit adds a blue-tinted filter and ups the contrast to make it look like a still from a futuristic sci-fi flick. 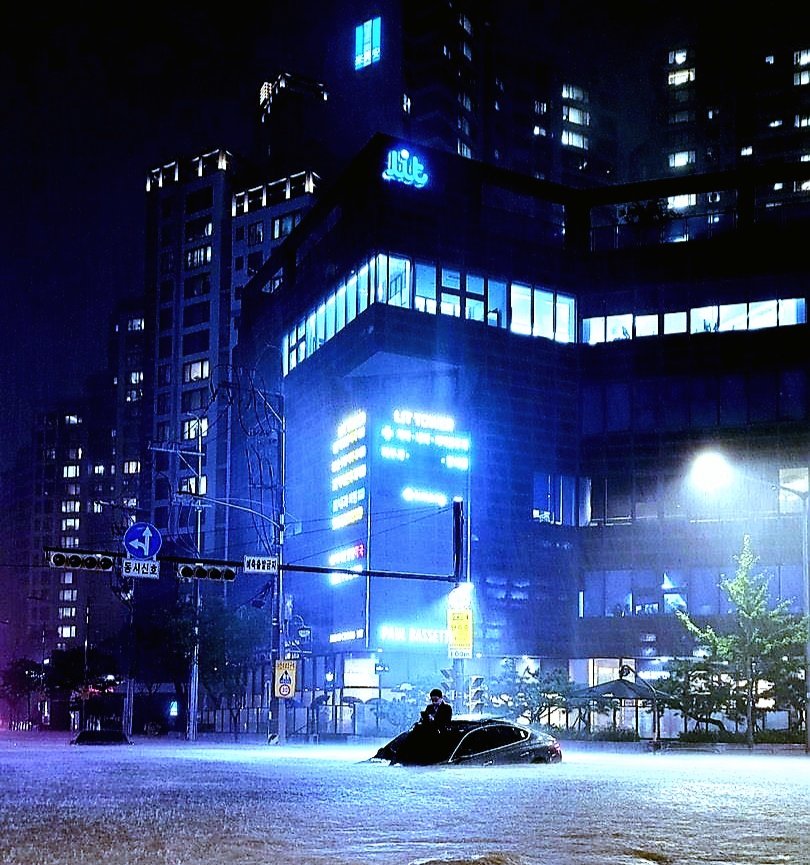 Another netizen used some pretty impressive Photoshop skills to add a rescuer swooping in on a helicopter to help the man. 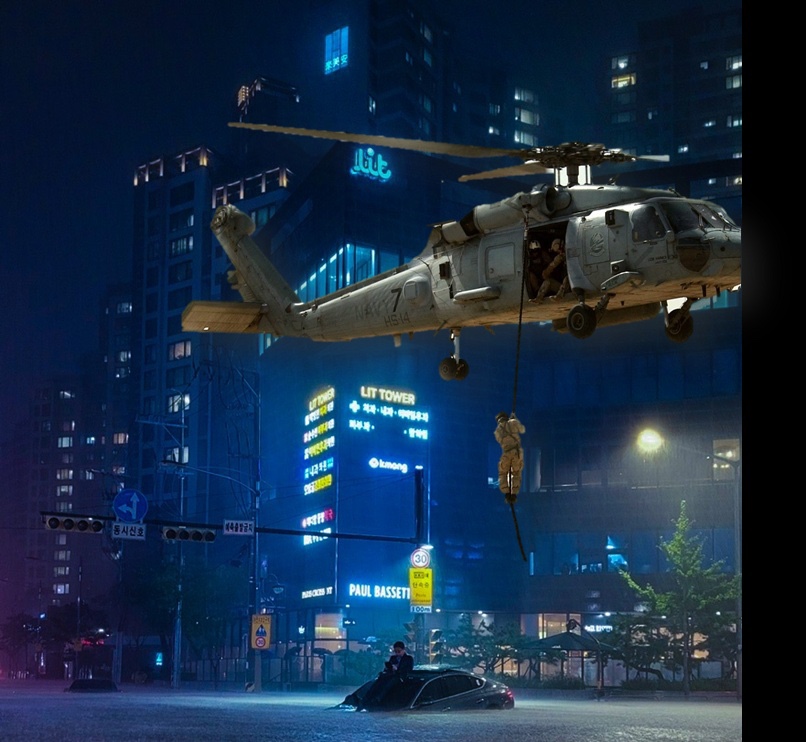 Taking inspiration from the South Korean disaster-action film ‘Emergency Declaration’, this meme turned the photo into a movie poster. 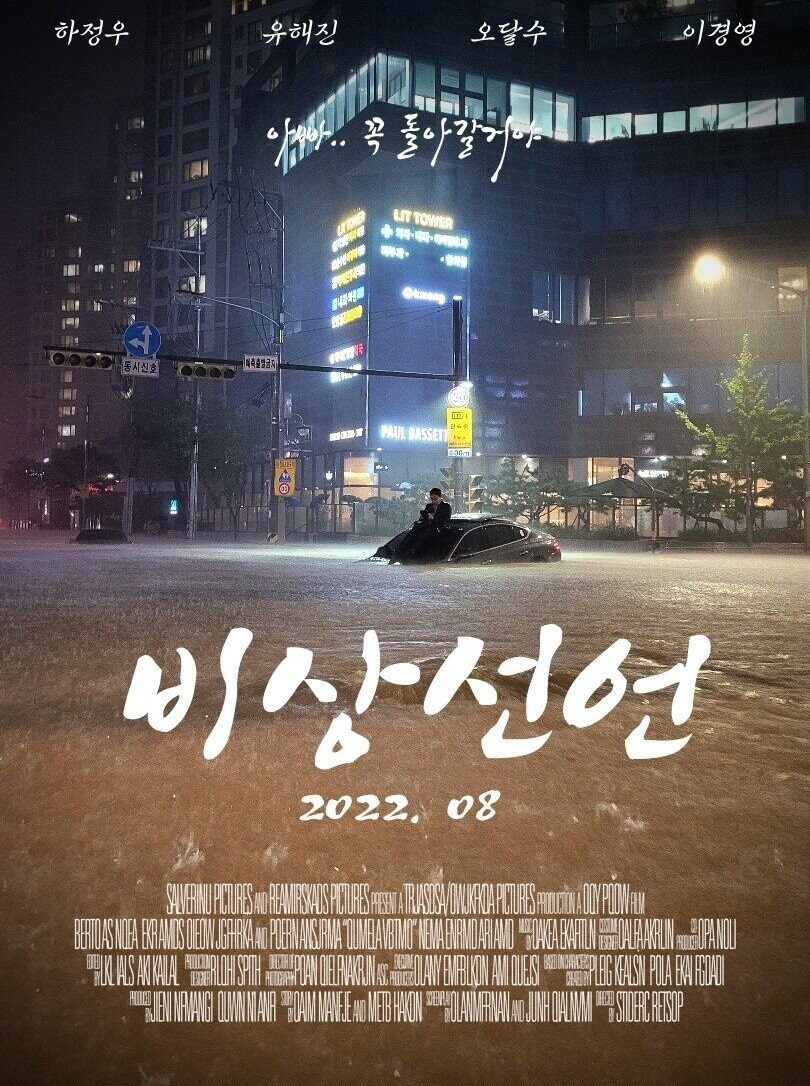 Rumour has it that the man was actually a reporter from Korean news agency Yonhap News and that he was providing live updates from the roof of his car.

I should’ve said the man’s identity isn’t verified info, just something Koreans are sharing over the Internet. I’m sure they’ll find him, if he wants to be found. Muting this thread

However, the news agency has yet to confirm this at the time of writing.

The flood itself is no laughing matter

The man’s ability to chill even in such harsh conditions is a total mood that we all wish we could emulate.

But on a more serious note, the floods have been absolutely devastating, leaving at least 11 dead and eight others missing, Yonhap News Agency reports.

Almost 1,000 people have also been displaced, while over 4,200 others have been temporarily evacuated.

We offer our condolences to the loved ones of the deceased and hope that those who were affected by the floods will be able to rebuild their lives and homes again very soon.