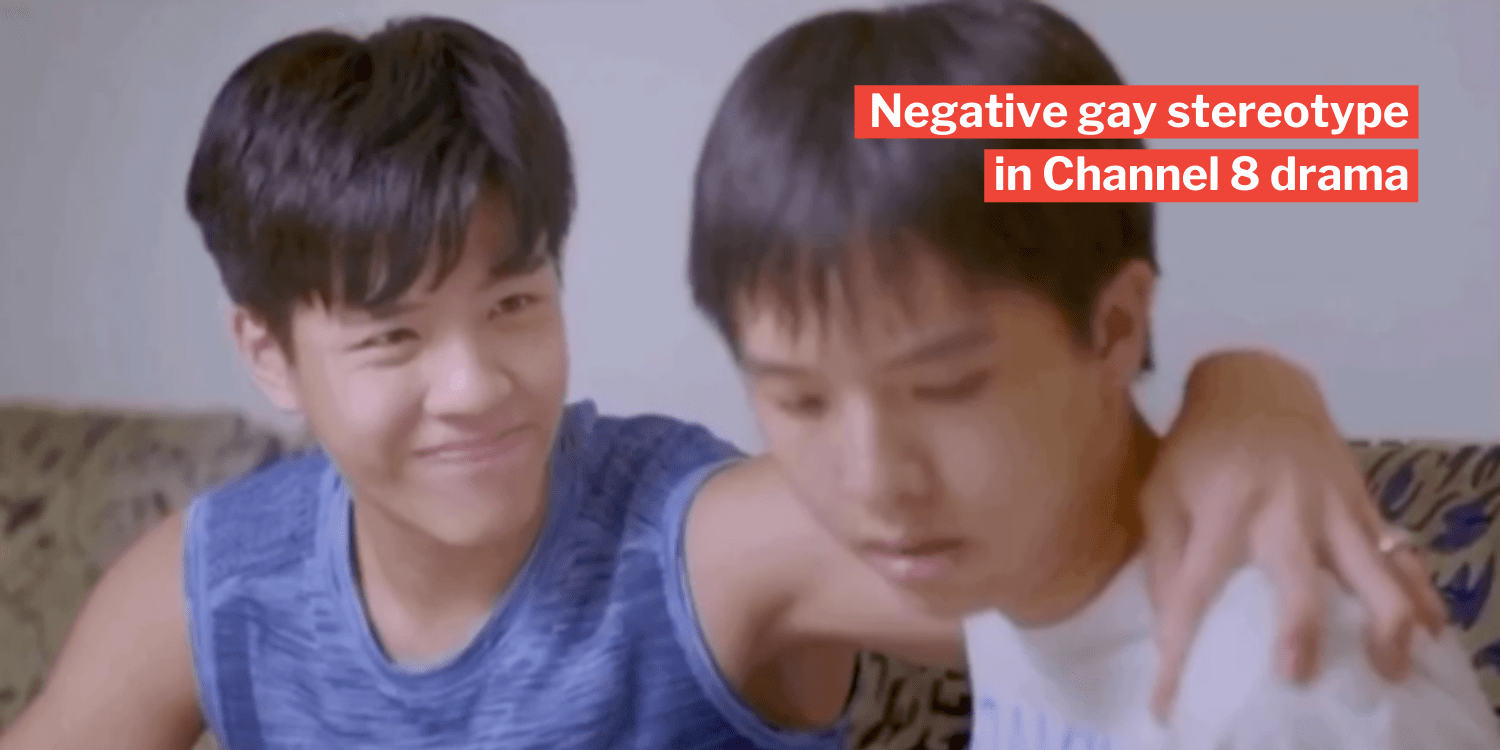 UPDATE (15 Jul): Mediacorp has released a statement addressing this issue at length. Article has been updated below.

Certain societies around the world are on their journey to becoming more progressive in terms of accepting the Lesbian, Gay, Bisexual, Transgender (LGBT) community.

This is reflected in portrayals of LGBT characters in the media. From Captain Holt in Brooklyn 99 to Mitchell in Modern Family, LGBT representatives are no longer one-dimensional characters that fit neatly into stereotypes.

Back home in Singapore, we are not quite there yet.

A Channel 8 drama has rubbed some Singaporean viewers the wrong way, as they found the portrayal of the show’s gay character problematic. 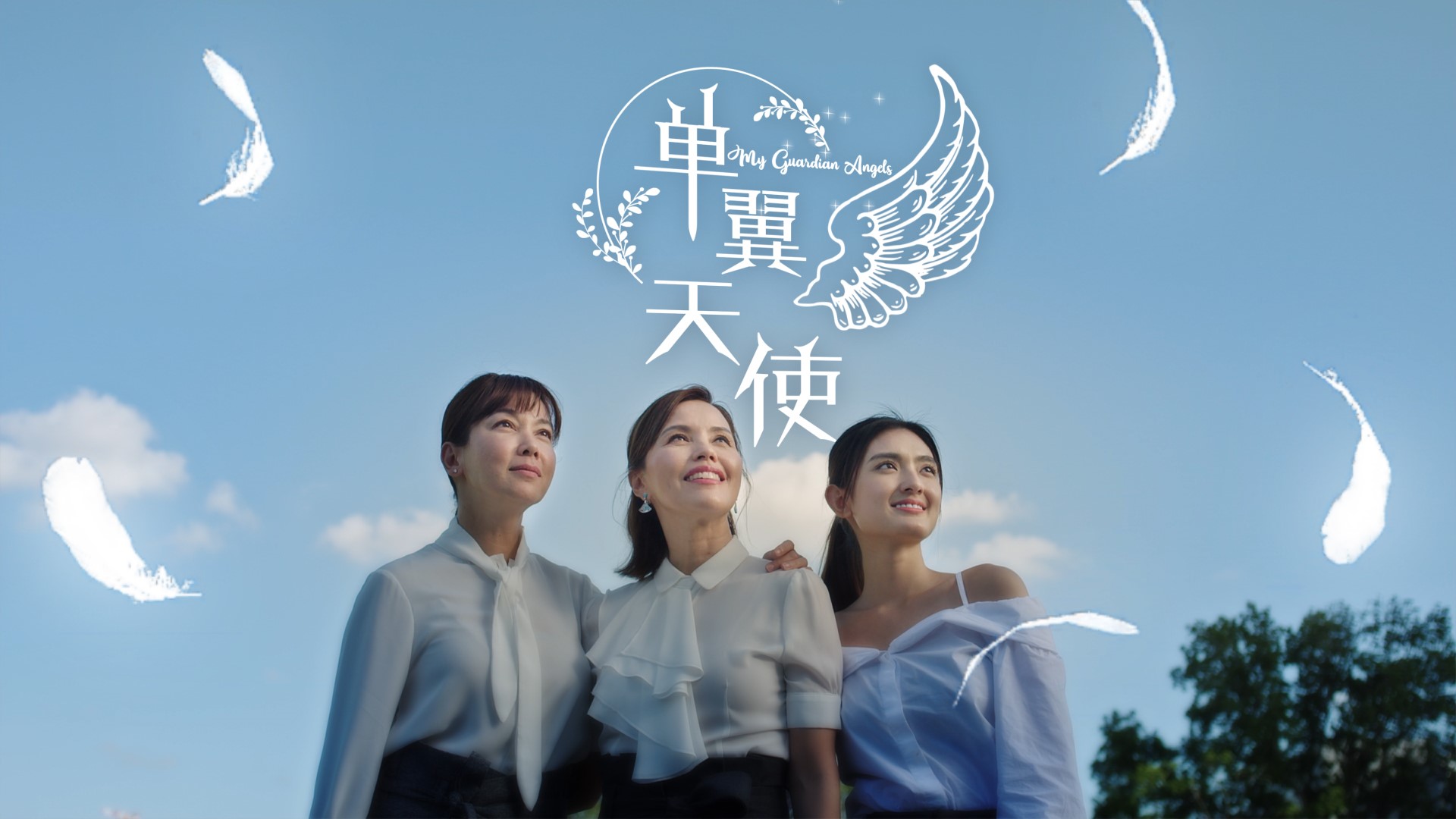 Netizens expressed their discontentment with Mediacorp on social media.

Mediacorp has since apologised and acknowledged the need to be more careful when it came to representation of characters.

Mediacorp gets backlash for portrayal of gay stereotypes in drama

Platforms like Dear Straight People – an LGBTQ+ publisher – also called them out, highlighting that the gay character in the drama was portrayed as a paedophile who has a sexually transmitted disease. 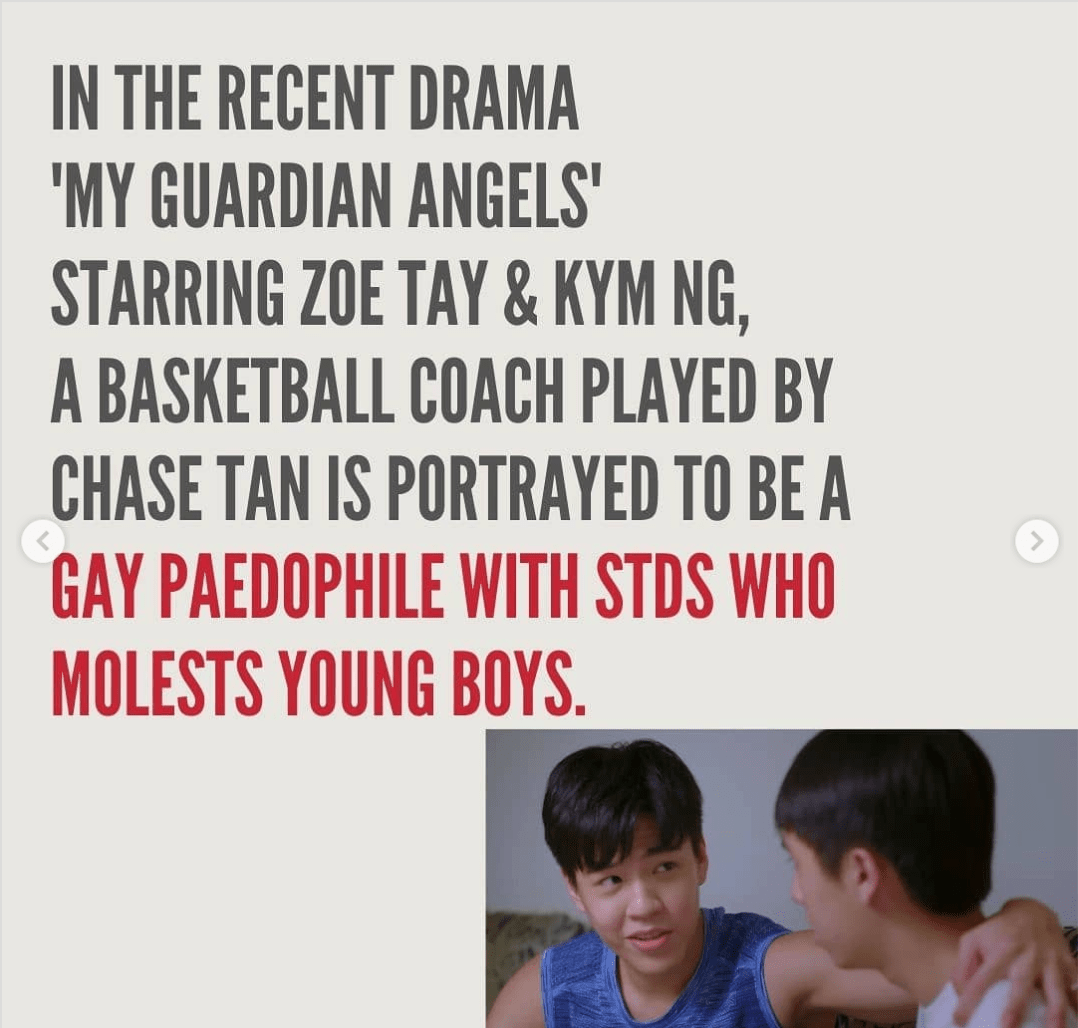 Netizens were quick to note that other characters had also behaved in a homophobic manner.

In this particular scene the parents responded to their son’s attempt to chase a girl by saying, “at least it’s not a guy”. 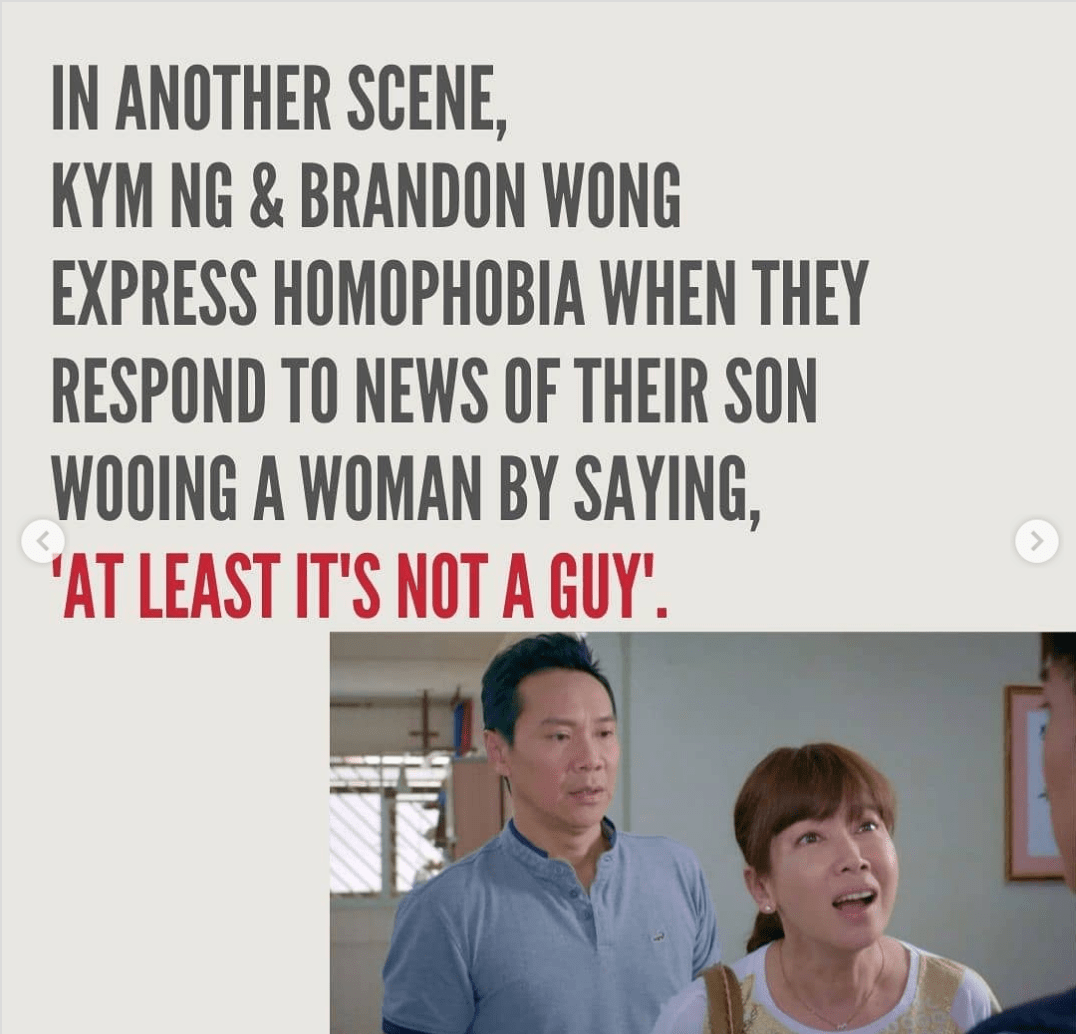 An online comic from Heckin’ Unicorn – a company selling LGBT merchandise – had also gone viral, describing Mediacorp’s portrayal of the one gay character in the show as “discriminatory”. 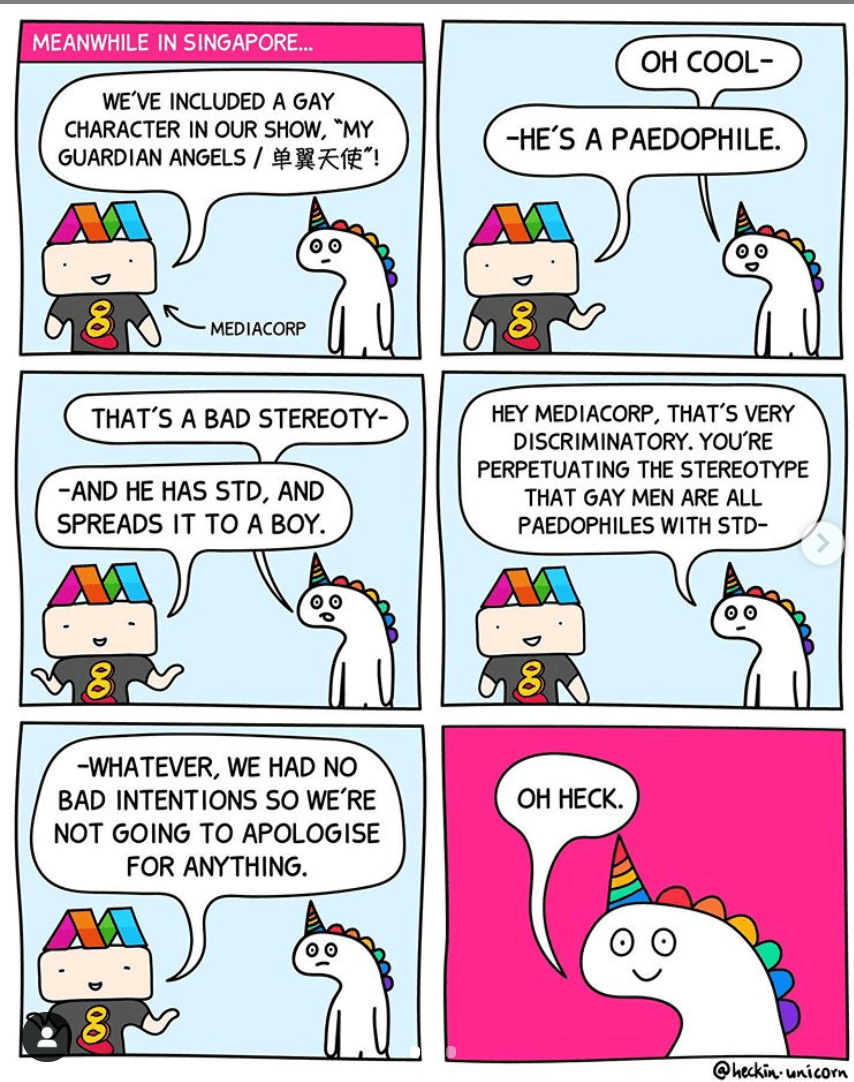 Mediacorp has stepped up and responded to social media posts criticising the drama.

They apologised if the content offended or caused distress to anyone.

There is no intention to disrespect or discriminate against any persons or community in the drama.

The comment ended off with them promising to exercise vigilance and be more mindful in their character portrayals.

Netizens were thankful Mediacorp responded. However, many were dissatisfied with the disingenuous nature of the apology.

The author of the initial post, Heckin’ Unicorn, called for Mediacorp to stop discriminatory behaviour.

Other netizens believed that Mediacorp needed to properly acknowledge that their character portrayal was offensive and perpetuating negative gay stereotypes. 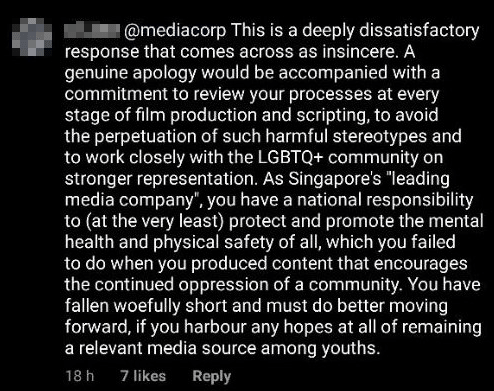 This netizen pointed out that as Singapore’s national broadcaster, they had a responsibility to protect everyone in the community from harmful stereotypes, including homosexuals.

Infocomm Media Development Authority (IMDA) regulations in Singapore dictate that films “should not, promote or justify a homosexual lifestyle.”.

Well aware of these restraints, some commented that Mediacorp should “either have neutral or positive LGBTQ+ representation or don’t have them at all”.

Mediacorp has released an official comment, clarifying their stance. You can read their full statement below:

Mediacorp has received feedback from members of the public on the Channel 8 drama, My Guardian Angels. We would like to assure everyone that there is no intention to disrespect or discriminate against the LGBTQ community in the drama.

We would also like to provide clarifications on the specific characters and subplots highlighted in the social media posts regarding this matter.

The first sub-plot involved parents who were concerned that their young son may be in a relationship with another boy. It depicted the overly protective mother spying on her son and eventually finding out that he was instead interested in a girl who lived nearby. When she expressed her disapproval with his choice, the father character responded that she should just be glad he was interested in a girl. This scene reflected the parents’ attitudes and reactions. This storyline aims to depict the real life struggles some parents face in communicating with their children on topics such as relationships and sexual orientation.

The second sub-plot involved a paedophile who was a coach of a male basketball team. The intention and overall message of this sub-plot is to encourage young people to be aware of potential dangers, and not be afraid to speak up and protect themselves. Mediacorp has hitherto depicted paedophiles preying on young girls in other dramas.

In both scenarios, there was no intention to depict the LGBTQ community in a negative light.

We are sorry to have caused offence and distress. We have heard your feedback and will continue to exercise vigilance and be mindful of our portrayal of characters.

We would also like to appeal to members of the public to refrain from making personal attacks on Kym Ng and Brandon Wong, the Mediacorp artistes who portrayed the characters of the parents. Both Kym and Brandon have received many abusive messages and comments over their roles in this drama. We would like to reiterate that they have played these roles in their professional capacities, and there was no intention on their part to cause any offence.

The media is a strong agent of socialisation. As Singapore’s main broadcaster, Mediacorp has a wide audience and the potential to shape mindsets.

We are thankful for Mediacorp’s acknowledgement of the problematic nature of their character portrayal.

Hopefully, the call for better representation by the LGBTQ+ community has been heard by Mediacorp and they will be more cautious in future.