An IMH psychiatrist diagnosed him with bipolar affective disorder.

The last thing one would expect to see on the road is a naked man. But believe it or not, something like this occasionally happens in Singapore.

One man was caught walking around in his birthday suit in Eunos last year — and here are the consequences.

On Thursday (5 May), 25-year-old Yeo Qi Wei was given a mandatory treatment order (MTO) instead of jail time for appearing nude in public.

An Institute of Mental Health (IMH) psychiatrist determined that his Bipolar Affective Disorder contributed substantially to his offence.

According to The Straits Times (ST), Yeo pleaded guilty to two counts of public nudity and one count of criminal trespass.

On 9 Jun 2021, he entered Singapore Shopping Centre at around 12.30am and told the security guard he was going for a massage on the fifth floor. However, when the guard checked surveillance footage, he saw him proceed to the fourth storey instead. Yeo was found in one of the units that had a damaged door. The police were then called for assistance.

The DPP said CCTV footage revealed that the accused forced open the door to the unit. After entering, he connected his laptop to a TV and watched something on it for a while.

Arrested for riding his motorcycle naked

The next day, he was seen riding his motorcycle naked in Eunos and on the Pan-Island Expressway (PIE). 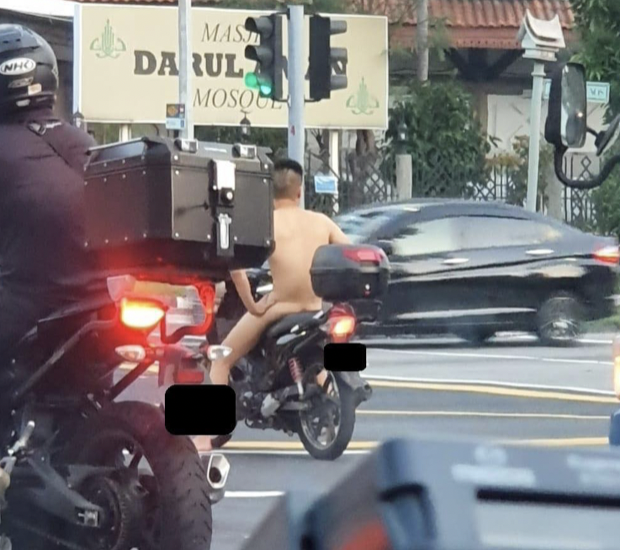 Before this happened, Yeo was walking around in his underwear and approached a man at a Toa Payoh carpark. Yeo undressed, climbed onto the man’s vehicle, and left his underwear there.

He then left the scene on his motorcycle, which was parked in the area.

Shortly after the incident, he appeared naked at an HDB staircase in Choa Chu Kang, where he was believed to be touching his private parts.

ST reported that Yeo was sentenced to MTO, which means that he will receive mental health treatment instead of serving jail time.

During investigations, an IMH psychiatrist diagnosed him with bipolar affective disorder, which had a “substantive contributory link” to his criminal acts. However, it was determined that Yeo had a low risk of re-offending.

Therefore, the court recommended him for psychiatric treatment.

Hope he will receive the necessary psychiatric support

In Singapore, being naked in public is an action punishable by law.

We urge everyone to remain sensitive when making comments about this case since it was likely out of his control.

Hopefully, he will receive psychiatric support and treatment so that such an incident will not occur again.

Featured image from MS News and adapted from Facebook.