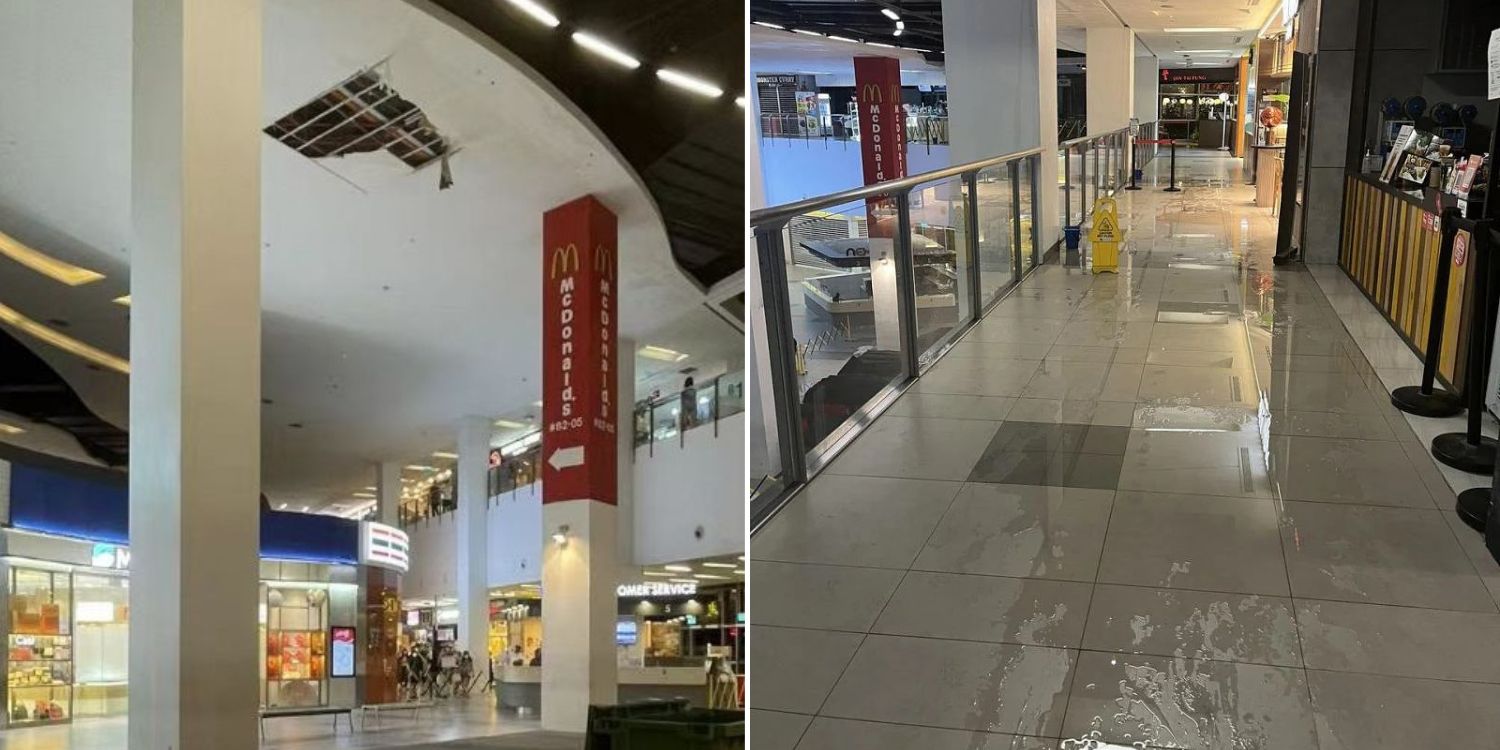 Parts of the mall had to be sealed off from shoppers.

UPDATE (8 Aug, 11.25am): Responding to enquiries by MS News, a NEX spokesperson explained that a tenant on the first floor had alerted them to a water backflow incident at around 5.55pm on 6 Aug.

An on-site Operations team responded immediately to provide assistance. They identified a plumbing issue that originated from the tenant’s floor trap, where the water backflow had spread to their retail area and leaked down to levels B1 and B2. Contractors fixed the choke and resolved the issue by 11pm.

As of today (8 Aug), the affected areas have been checked and are now accessible to shoppers.

Those who frequent NEX mall in Serangoon would know that it’s always crowded, and more so during the weekend.

However, this weekend might be a little quieter for the popular mall after some tenants had to suspend their operations temporarily.

This was due to flooding in the basement levels caused by a water leakage.

The leakage even caused part of the false ceiling to give way and debris to fall into the vast atrium below. 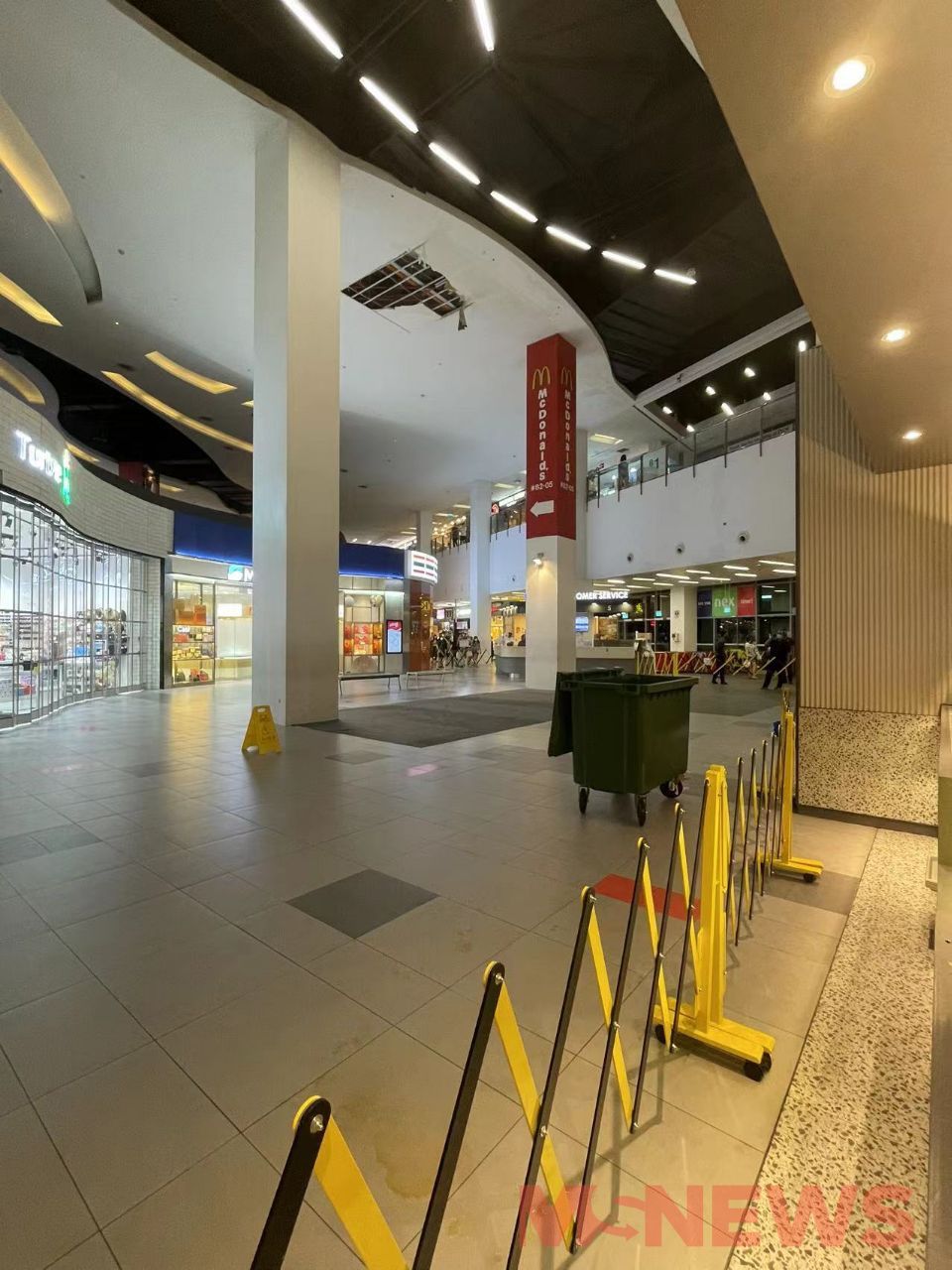 The leakage occurred on 8.30pm on Saturday (6 Aug) night, reported Lianhe Zaobao — a time when human traffic would’ve been quite heavy.

According to a photo sent in by a Zaobao reader, the corridor outside Tiger Sugar in B1 was filled with water, and the area cordoned off, as of 2am on Sunday (7 Aug). 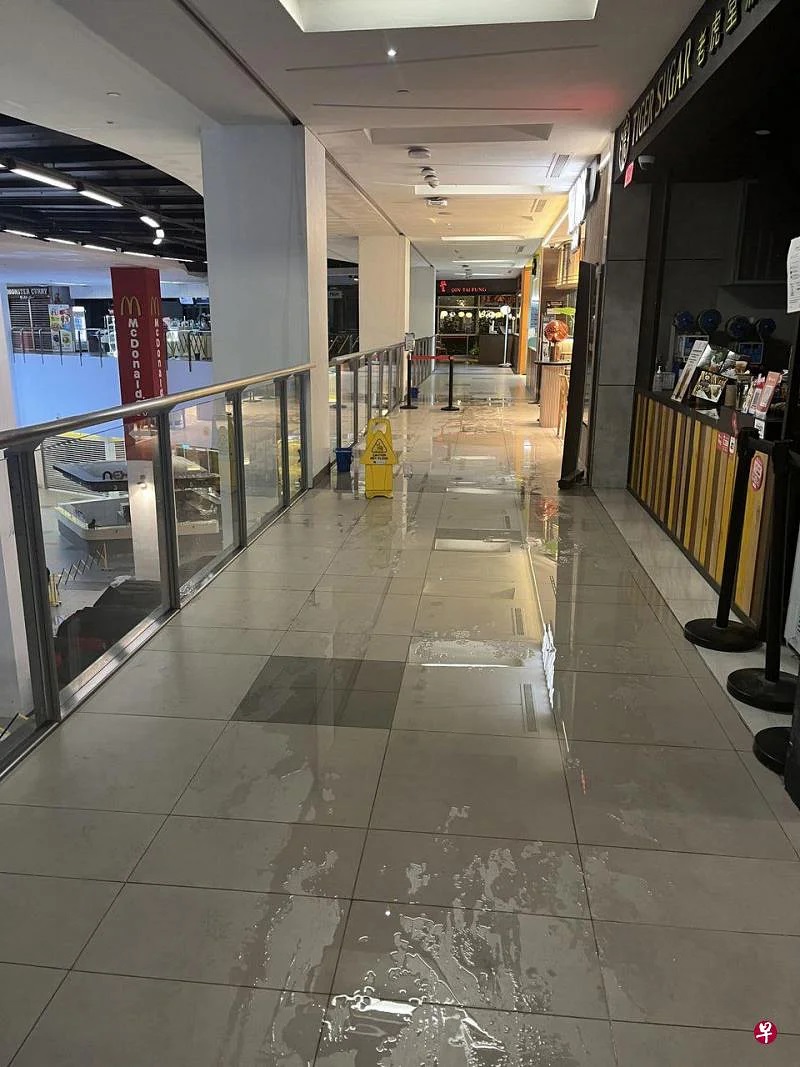 There was a similar situation at the area outside the Food Republic food court in B2.

On Sunday morning at about 9am, Zaobao’s reporter observed that the water had been cleaned up, but part of the false ceiling over the B2 atrium had given way, leaving a gaping hole.

Debris and dust had also fallen onto the floor below, including some covered items being sold in the atrium. 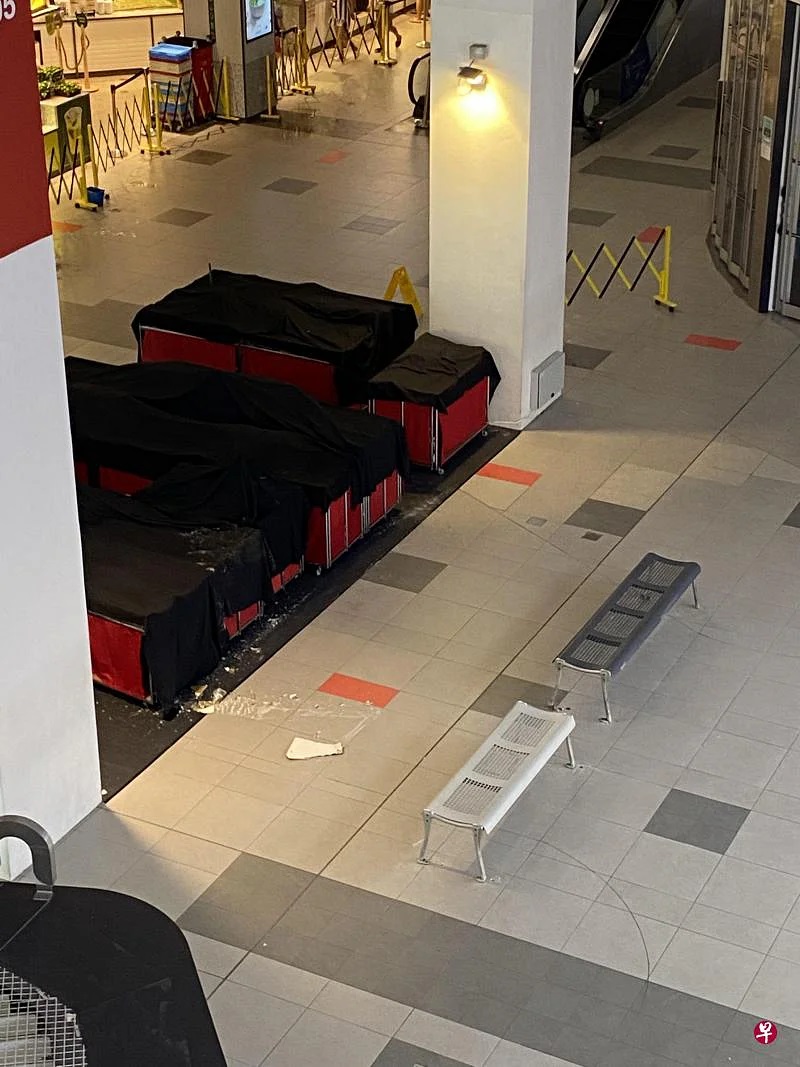 A video posted by a TikTok user on Sunday showed that the hole in the ceiling was quite big indeed, and there were still loose pieces dangling down seemingly ready to fall anytime. 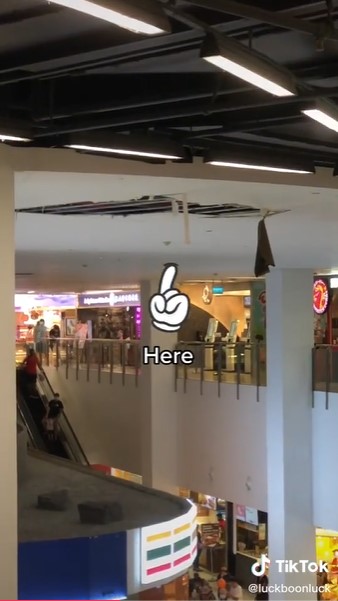 The clip also revealed a considerable amount of debris on the floor, comprising fairly large pieces. 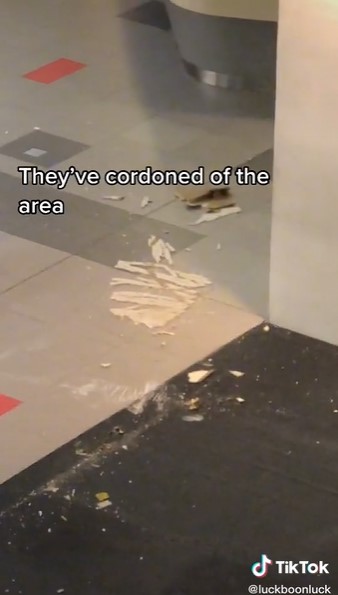 Parts of NEX cordoned off

As of 8.10pm on Sunday (7 Aug), the B2 atrium was still inaccessible and the shops within, including Turtle, Maxi-Cash and Kcuts, were closed. The 7-Eleven outlet and Food Republic were still open for business, though.

Besides the B2 atrium, the escalators outside Food Republic leading up to B1 were also blocked off. 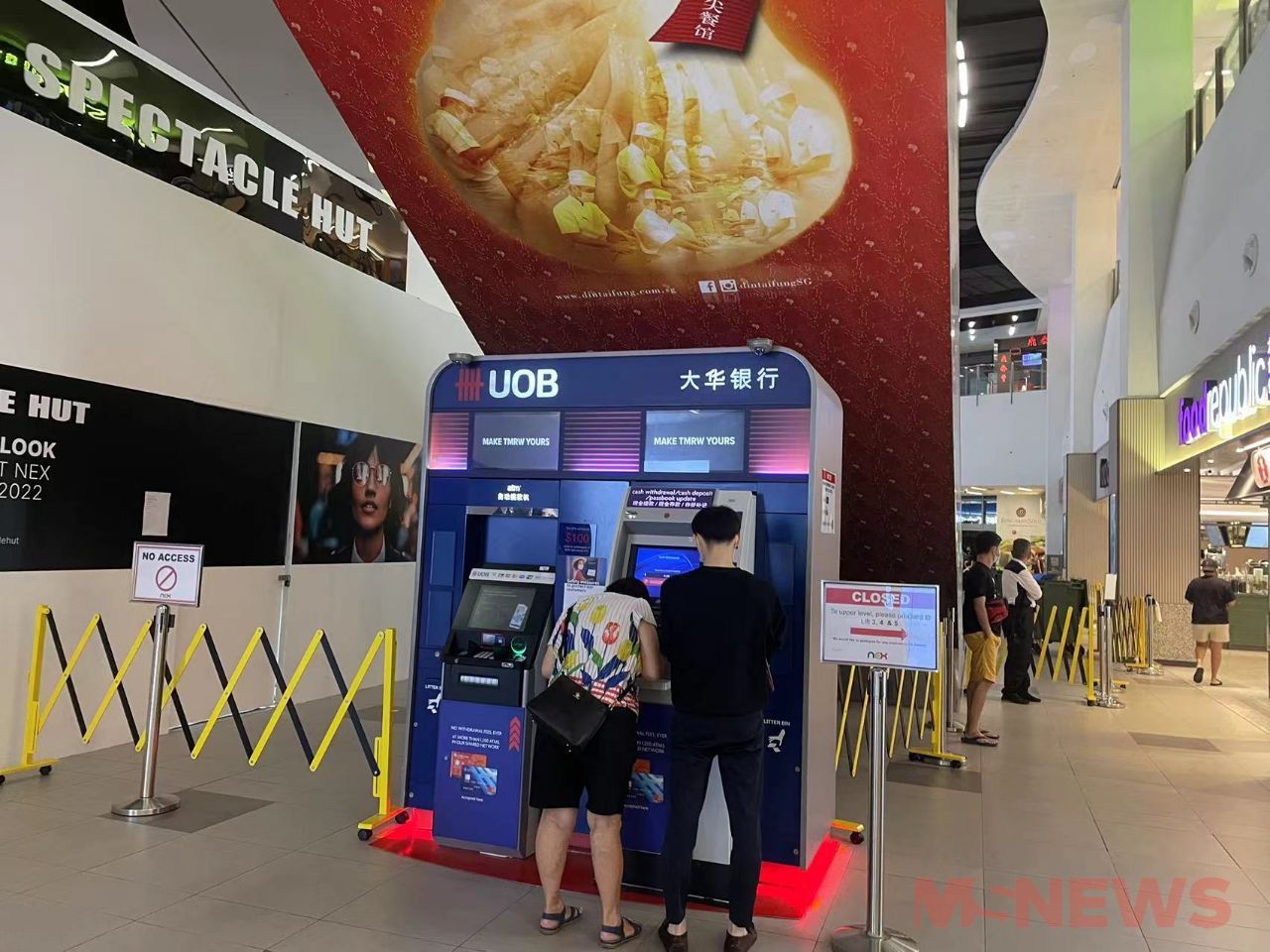 That meant shoppers had no choice but to use the lifts if they wanted to go upstairs from that area.

As for the hole in the ceiling, it was unfortunately still quite huge, with bits of ceiling still dangling about. 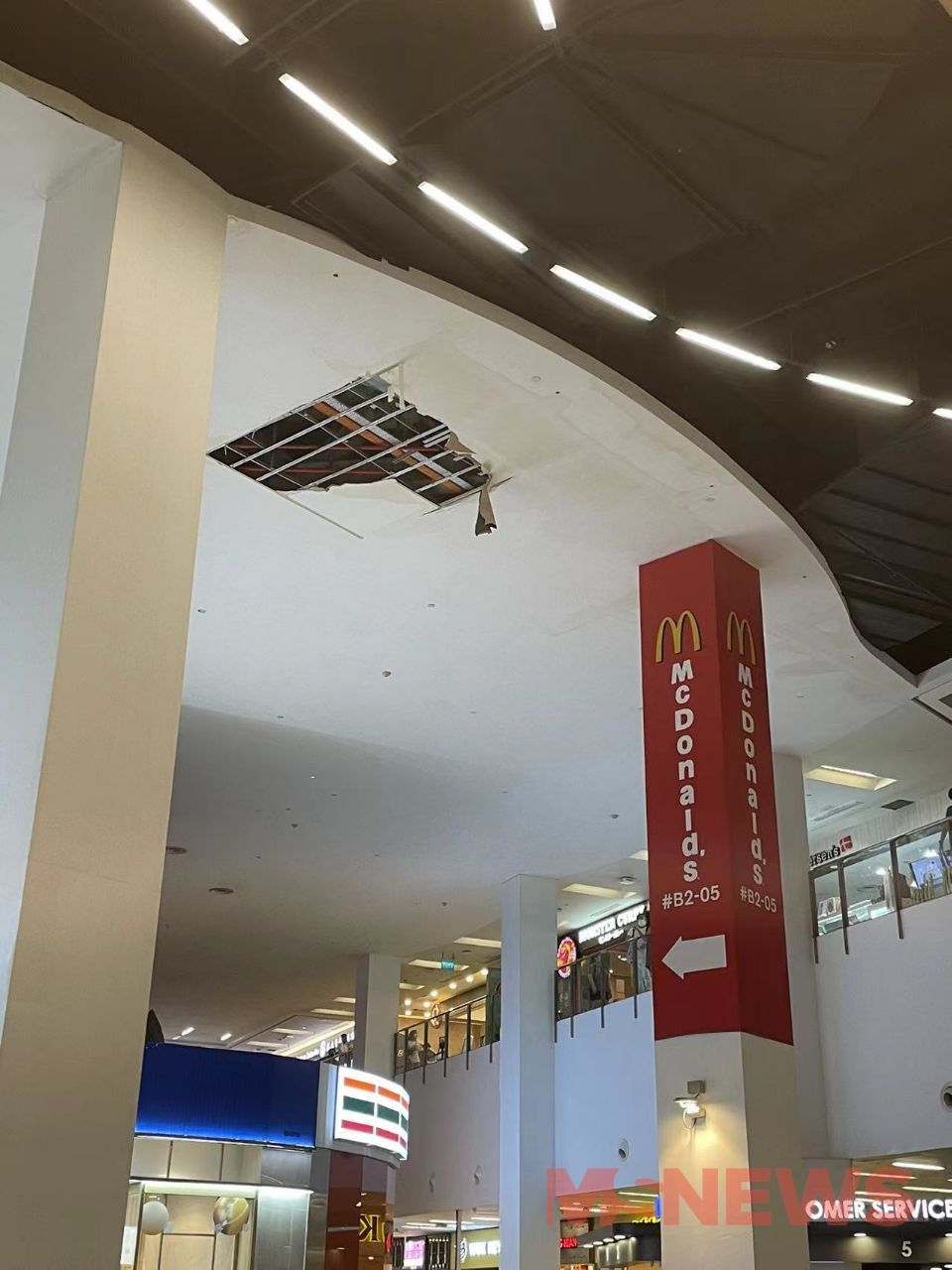 In response to queries from MS News, a NEX spokesperson said the ceiling leakage was due to a plumbing issue.

The mall was actually alerted at 5.55pm on Saturday about a “water backflow incident”.

The water backflow had originated from the floor trap of a tenant on level 1, and spread to their retail area. It also leaked down to B1 and B2.

Contractors fixed the choke by 11pm that night, the spokesperson added.

Some tenants informed to suspend operations

However, remnant water continued to leak down from the level 1 unit.

This “affected some tenants across B1 and B2”, NEX said.

Thus, these tenants were informed to suspend operations for the safety of tenants and shoppers. 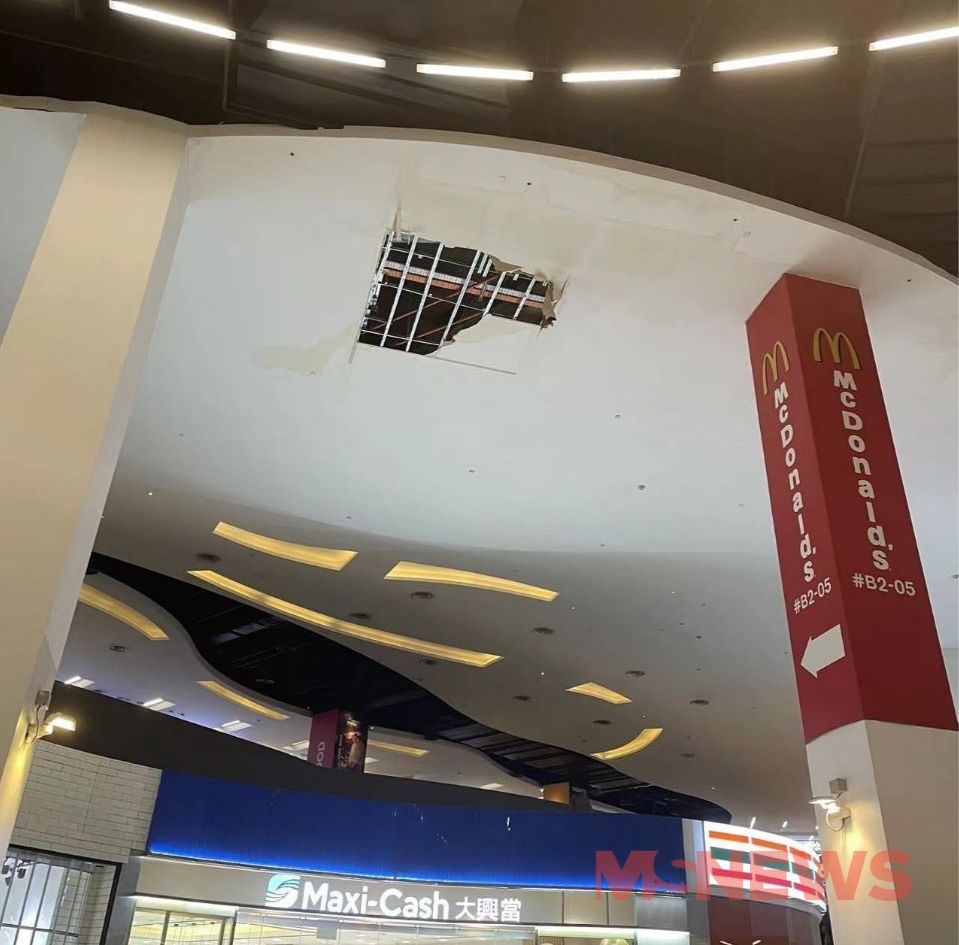 They’ll reopen only when the issue is fully rectified, the mall said, adding,

We apologise for the inconvenience caused to our tenants and shoppers, and will work with our contractors to rectify the affected areas ASAP.

The manager of Tiger Sugar told Zaobao that when the leak occurred on Saturday night, the corridor outside the outlet became slippery.

Customers had to walk carefully to avoid slipping and falling.

While the water was cleared the next day, the blockage of the escalators might mean that business might be quieter despite it being a Sunday.

This regrettably isn’t the first time NEX has had ceiling issues.

Almost two years ago, a part of the ventilation system came crashing down at Shaw Cinema in the mall, injuring two patrons.

That incident was attributed to water accumulation, and the cinema had to be closed for months.

Thankfully no injuries this time

Thankfully, there were no reports of injuries this time round due to the leakage and ceiling collapse.

While there’s not much the public can do to avoid such incidents, the building’s management can check its plumbing system thoroughly so something similar won’t happen a third time.

We hope the affected tenants will be able to resume business as soon as possible.