If you’re a stickler for punctuality, missing the train and having to suffer a 3-min wait could seem like a big deal.

If you simply prefer to stick with your best friend come what may, missing the train is so big a deal that it’s worth prying open the MRT doors over — at least for one woman in particular.

An auntie travelling from Little India MRT missed the train at first, but her friend managed to get in. It seemed like she couldn’t handle the separation and became super kancheong, according to this undated viral video.

The force of her friendship was so strong, that she mustered the strength to force open the platform doors. Despite getting stuck between the train and platform gap momentarily, she then successfully opened the MRT doors.

As amazing as that sounds, do note that this behaviour is highly discouraged, for safety reasons.

In case you don’t know what kancheong means, it’s a Cantonese and Hokkien term for being anxious or harried.

In the 1-min 45-sec video, we first see the pair making a run for the train just as the door lights were blinking — a clear signal that you should wait for the next train instead of chiong-ing.

The first woman makes it. But sadly, the super strong auntie – as you will soon see – missed the chance to board in time.

No closed doors will stop her

An adrenaline rush is real. So real, that the auntie disregarded safety guidelines and simply tried to pry her way in.

How? She forced the platform doors open, as seen in the GIF below.

She ended up getting stuck between the platform and train doors. But the brave auntie’s daring pursuit didn’t stop there.

Managed to get in with some help

The auntie’s actions presumably shocked many onlookers, as they rushed to help her out. Fortunately, the auntie managed to force the MRT doors open and squeeze her way in.

We aren’t sure of the sequence of events that followed, but the doors were left open for a while. Authorities rushed to inspect the doors, probably to ensure that there was no malfunction to the mechanism. 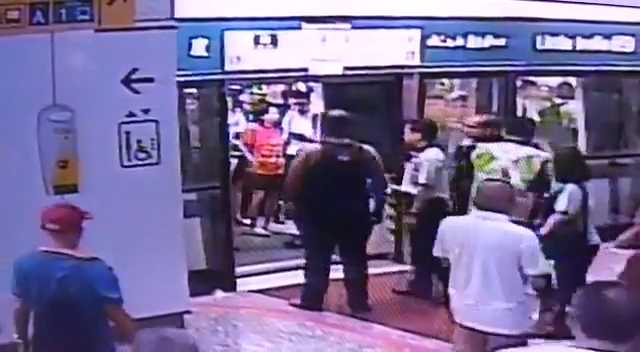 Despite a longer wait than usual, the doors eventually closed, and the train successfully departed the station. Everything resumed to normal, we hope.

We’ve reached out to SBS Transit for their comments.

Shortly after All Singapore Stuff posted the video, netizens were shocked and worried when they saw how kancheong the auntie was.

This Facebook user reminded us that safety comes first, and that the train comes every 5 minutes.

Another Facebook user thinks that maybe the auntie “saw her husband with another beautiful lady”, and that she was jealous.

Meanwhile, this netizen cheekily quipped that this was the movie trailer for Marvel’s powerful superhero — She-Hulk.

We should consider if it’s worth being late for a few minutes, rather than jeopardising personal safety. Anything could have happened during those frenzied moments of getting the doors to work in the auntie’s favour.

Although nothing serious happened, her actions could affect the safety of many other passengers as well.

Be safe. Plan your time well. And more importantly, don’t kancheong — the hassle and potential safety risks are simply not worth it.