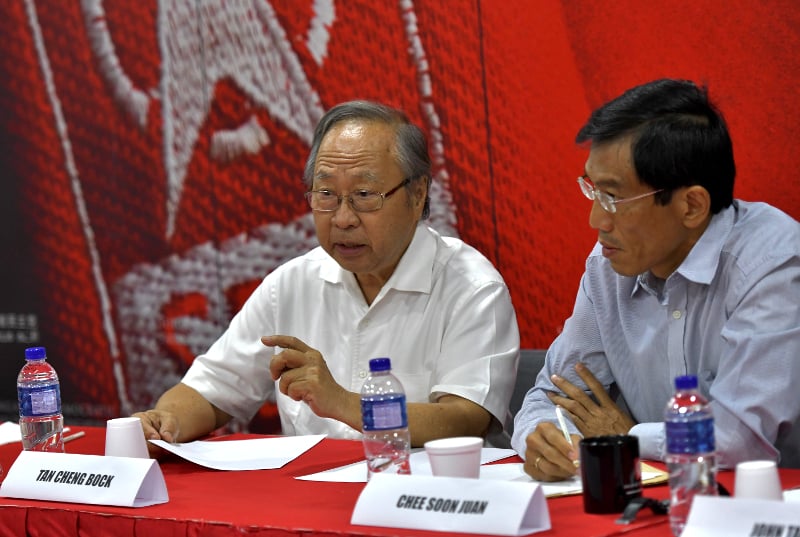 In a move that will inevitably draw comparisons to Mahathir’s winning strategy in the Malaysian elections, SDP met with 6 other opposition parties to “explore…possibilities” at a working lunch on Saturday (28 Jul).

Here’s what they discussed, and how it may impact the climate of Singapore’s political opposition in the next General Election (GE).

The opposition coalition, if realised, hopes to present a “unified front” at Singapore’s next GE, which must be held by April 2021.

7 parties, including SDP, took part in the luncheon:

Singapore People’s Party helmed by Chiam See Tong, was sent an invite, but did not turn up to the meeting.

It also remains unclear if Workers’ Party was invited, or if they chose not to turn up. They did not comment on the matter when contacted by The Straits Times.

Ex-presidential candidate to lead the charge

Apparently, those in attendance “welcomed the move”.

What say you Dr Tan?

Dr Tan was attending the meeting as “an observer”, and this was his response,

If you want me to lead, then we must think of country first. If we go in, we must go in as a team.

According to SDP, various reps from other opposition parties “express(ed) their enthusiasm in greater cooperation”, upon hearing Dr Tan’s reply.

Ex-NSP Secretary-General (Sec-Gen) Mr Lim Tean – founder of the proposed ‘Peoples Voice‘ party – emphasised the need to work out the “exact form of such cooperation”, and a “centralised form of leadership“.

Sec-Gen Mr Goh Meng Seng – who repped the People’s Power Party – agreed with Lim Tean, that “without discipline” a coalition could spell trouble.

Democratic Progressive Party’s Mr Ben Pwee opined that “ego politics” and past differences between parties should be cast aside.

The coalition of “like-minded parties” will be aimed at “forging a competent and credible oppositional force”, to advance Singapore’s political scene.

However, SDP chief Dr Chee told those present that surface cooperation without substance, will result in Singaporeans calling their bluff.

He cautioned that they had to deal with “powerful forces” who would ensure the “opposition remains divided and dysfunctional”.

According to him, SDP only hopes to facilitate cooperation between parties, rather than “spearhead(ing) the effort” — SDP wishes to “contribute towards a common and greater good”.

As Singapore’s 53rd birthday approaches, perhaps it is only fitting that our opposition parties are eyeing new beginnings.

We are presented with an opportunity to take Singapore forward into a promising future. May we all have the wisdom to seize it and act with moral clarity and good sense.

We’ll have to wait and see if all the parties present agree to endorse SDP’s joint resolution.

In the meantime, we’re left to wonder about where the Workers’ Party – arguably the most successful opposition party to date – stands in all of this.

New Zealand PM Jacinda Ardern Visits S’pore On 18 Apr, Will Get Orchid Named After Her