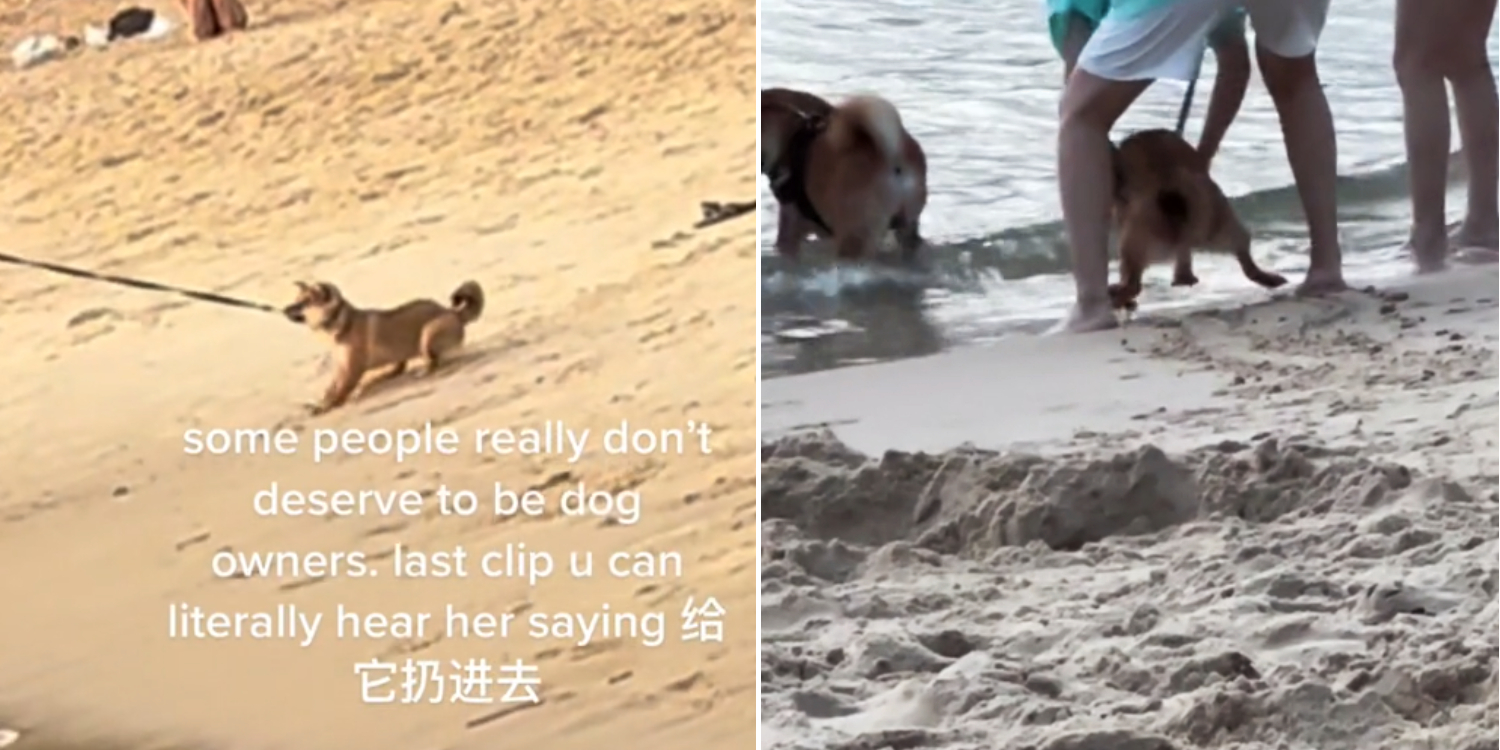 Pet owners are advised against dragging animals by the collar.

One can usually look forward to a day of fun in the sun at Palawan Beach.

However, for one onlooker and her boyfriend, her day was marred by a disturbing sight instead.

While chilling on the beach, she spotted a group of people dragging their Shiba Inu into the sea.

literally kicking the sand and throwing sand at the dog to get a reaction out of it. they are j using the poor dog for their Instagram pictures and posing it like as if it was a prop. they really don’t deserve to be dog owners. if they dare to do this in public imagine what happens at home… literally using the dog for ig photos and clout wtf this is pure animal abuse la wts like it was already so evident the dog didn’t wanna go into the water stop dragging it in 🤬🤬🤬 #fyp #animalabuse #shibainu #singapore #palawanbeach #sentosa #dog

The Shiba Inu was apparently afraid of the crashing waves as it tried its hardest to stand firm on the beach.

Despite its attempts to push back, its owners still forced it into the water.

TikTok user @cado_n_rudy shared the video of the alleged abuse on Sunday (18 Sep).

The leashed Shiba Inu can be seen being pulled with considerable force by a woman, who is presumably its owner. As the Shiba Inu sees the waves, it tries to resist the pull of the leash and attempts to plant its paws in the sand.

Its body language suggests it’s fearful and unwilling to enter the crashing waves ahead.

However, its owner continues to drag it closer to the sea, seemingly ignoring its fear of the sea.

As the waves crash onto the Shiba Inu, it frantically stands up in shock, visibly afraid of its surroundings.

Later in the video, the Shiba Inu can also be seen planting its posterior on the sand in a last-ditch effort to avoid the waters. However, another one of its owners says off-camera in Mandarin, “Just throw it in.”

A different owner then decides to pick it up to get it into the waters. 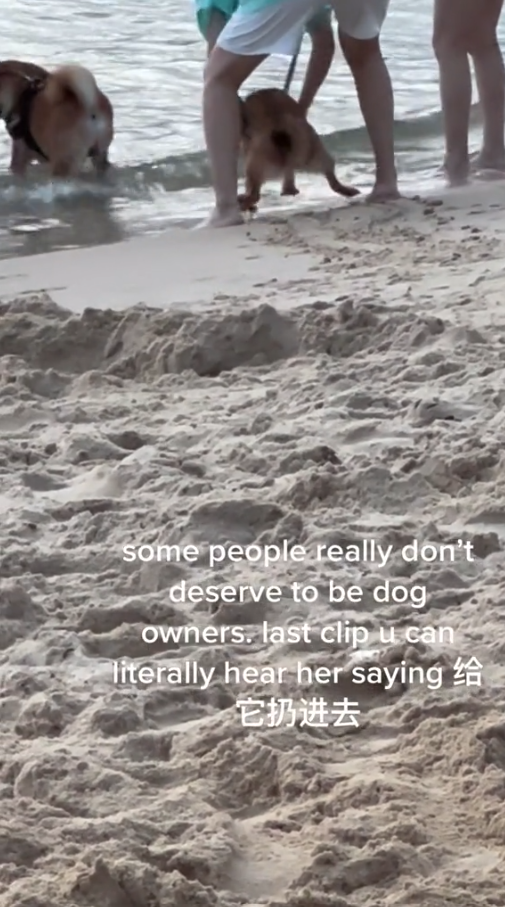 The Shiba Inu still tries to plant itself on the ground, but its owner immediately picks it up again to get it close to the sea.

Another Shiba Inu can be seen already in the waters, although it is unclear if they belong to the same group.

The video attracted a flurry of comments shortly after being posted, with most netizens expressing horror at the Shiba Inu’s treatment.

Some questioned why OP only appeared to record the incident without making any effort to help.

OP clarified in a reply that the Shiba Inu belonged to a big group of people, which meant she could not call them out publicly in case it endangered her or her boyfriend.

In a follow-up comment, OP claimed that the group appeared to be wealthy socialites from China.

Some commenters felt the owners did it purely to let the Shiba Inu have fun in the sea.

At the same time, multiple netizens tagged the Society of Prevention of Cruelty to Animals (SPCA) Singapore to bring their attention to the incident. 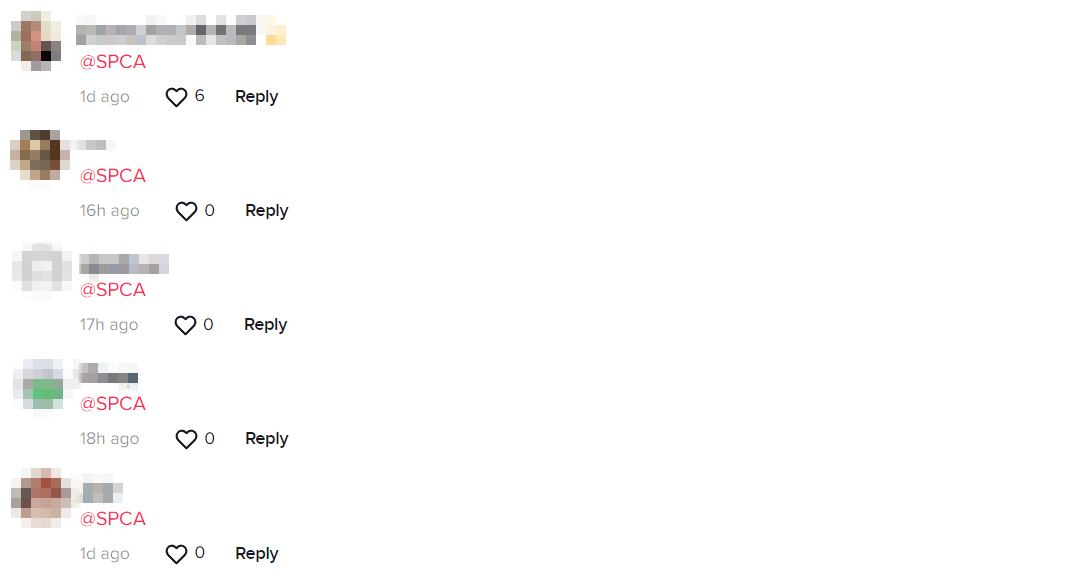 It appears to have worked, as SPCA has since commented to request the full video and additional information from OP.

This is her statement in full.

Tugging and dragging an animal by its collar restricts blood flow, which may cause damage to the nerves. To avoid injuring your dog, the SPCA always recommends pet guardians to use a harness instead, as it helps distribute force over a larger area.

Pet guardians should never force their animals into any situations (unless medically needed) that cause them distress. The dog in the video is clearly uncomfortable with entering the water, and the act of tugging and dragging the dog is an inhumane handling method. Animals should always be given their own time to adapt and get used to new situations.

We request anyone with information on the identity of the parties in the video to contact us at 6287 5355 ext 9 or email us at inspector@spca.org.sg.

Ms Aarthi stressed that the information provided would be kept in strict confidence.