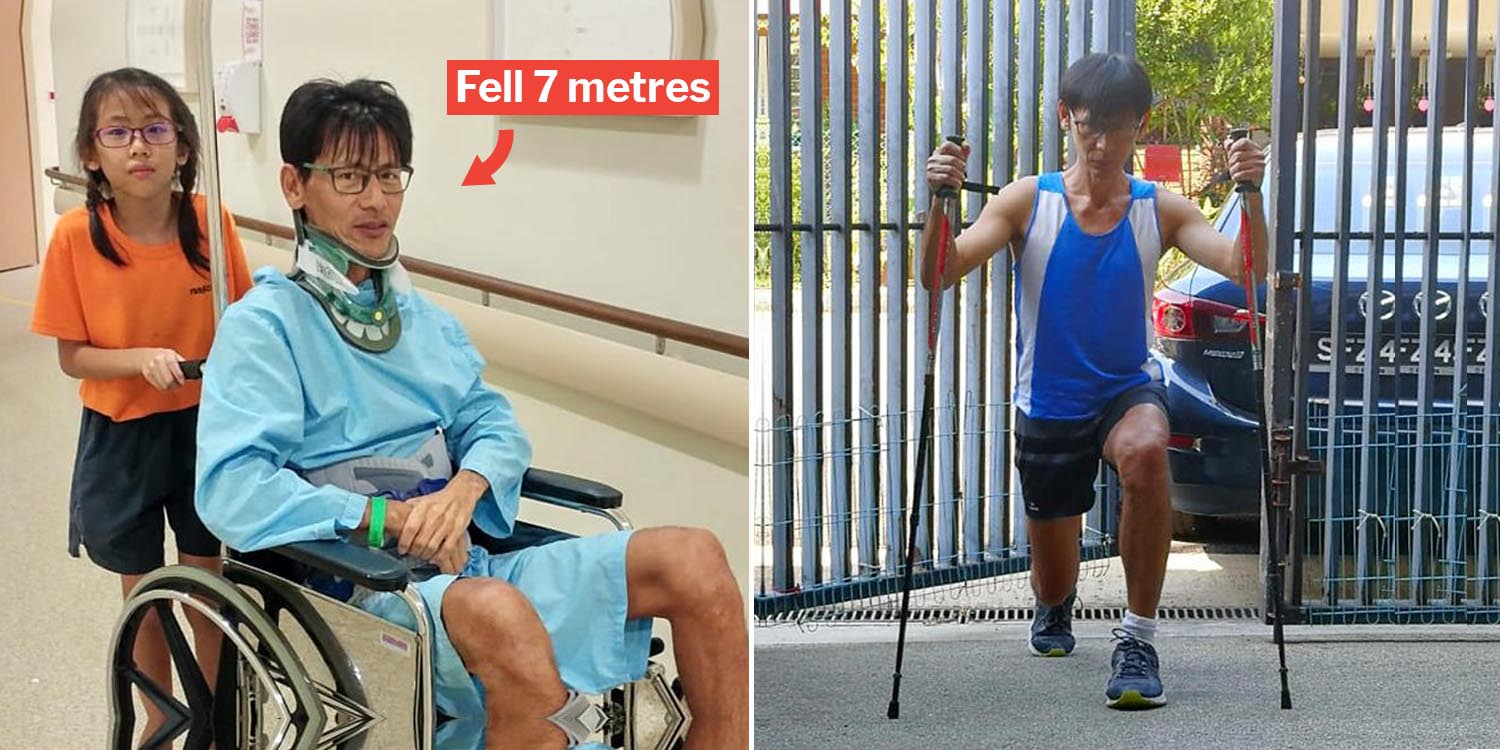 Most of us would have heard the saying “mind over matter”. Have you wondered what sort of miracles could happen if we put our mind into overcoming the toughest of times?

Singaporean rock climber Mr Chua Chee Beng is an exemplary personification of the saying. For he was told he would be wheelchair-bound for life after becoming partially paralysed.

He had fractured his spine and legs after falling from a height of 7 metres, according to Lianhe Zaobao.

About 2 years ago, Mr Chua, 50, decided to take up the challenge to climb a hill at Bukit Timah’s Dairy Farm Nature Park.

The park’s hill is said to be a challenge only suited for advanced climbers with a certain skill set.

However, Mr Chua was no amateur, being a full-time rock climbing instructor.

But when he was there, Mr Chua forgot to fasten his climbing rope, which caused him to plummet to the ground from a height of 7 metres.

He was taken to the hospital immediately.

After an X-ray diagnosis, doctors found fractures on Mr Chua’s ankles and heels.

As if this wasn’t bad enough, doctors also discovered a crack in his spine — he had damaged his spinal cord.

Here is a picture of his spine after the operation. We have censored the picture as it may trigger those who are sensitive towards explicit images of bodily wounds.

Due to the injuries he suffered, doctors pronounced him paralysed from the waist down. They also told him he needed to rely on a wheelchair for the rest of his life.

As a sporty character, this news devastated Mr Chua as it would mean the end of his career and passion.

Refused to surrender to his fate

In his interview with Lianhe Zaobao, Mr Chua said he refused to bow down to his fate. He promised himself that he would leave the hospital by foot in 2 months’ time.

With help from his physiotherapist, Mr Chua fought extremely hard to move his legs again.

As a result of his determination, and encouragement from friends and family, Mr Chua could walk using a cane by the last week of his 2-month stay at the hospital.

And just 4 months after the fall, Mr Chua was able to rock climb again.

During the same interview, Mr Chua mentioned a group of like-minded friends, who rooted for him during his injury.

As a token of appreciation, he pledged to participate in a 50km fundraising charity walk ‘Let’s Take A Walk’ this November.

As preparation, Mr Chua trained himself to walk at least 4km using crutches on alternate days.

A day before the interview took place, he successfully walked a total of 15km in 3 hours.

Although he doesn’t feel fully confident in completing the 50km charity walk, he said he will try his best and train hard in the coming months till then.

An inspiration to those going through a tough time

Even though Mr Chua was paralysed, his sheer willpower and mental strength enabled him to turn his life around.

His determination reminds us that no matter how tough life can get, the future is in our hands.

As with Mr Chua who refused to confine himself to the limits of his paralysis, we should not be stopped by our limits.

When the physical body fails, it’s the mind that keeps you going.