You know those posters advising the public to be careful of Internet love scams?

They’re meant to warn you to steer clear of suspicious online profiles. But what happens if you decide to scam the scammer instead?

A woman in Malaysia decided to give it a try and turned the tables on an unsuspecting online love scammer.

We’ll give you the juiciest highlights.

She caught his lies from the get-go

Ms Yeoh was not one to dive right into a conversation with a mysterious, handsome man online.

Her first instinct was to ask him how he found her Facebook profile.

Like a predictable scammer, ‘Oliver’ explained that he chanced upon her while searching for a different profile and couldn’t resist saying hello.

A few texts into their round of introductions, he told her his occupation — a Singaporean pilot for Vietnam Airline, flying to the UK and UAE. 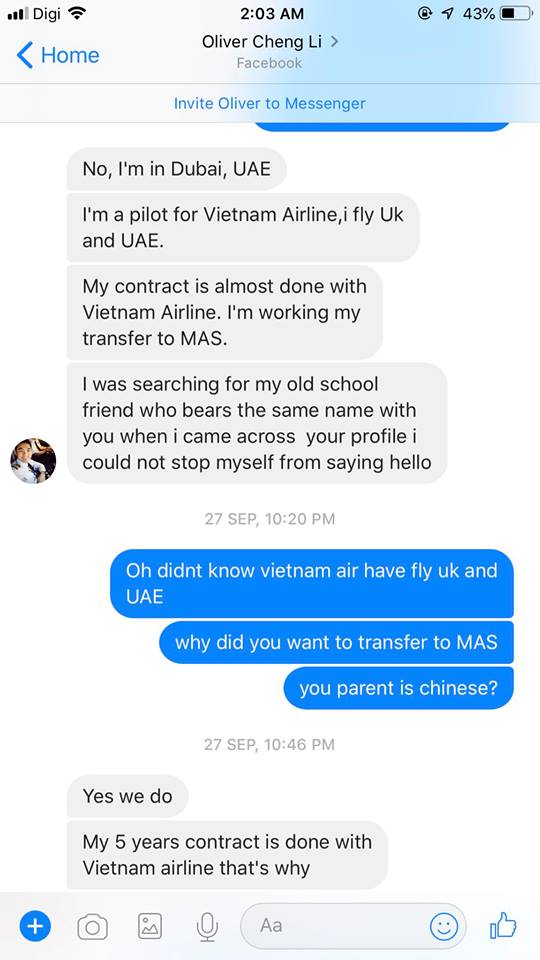 Ms Yeoh was quick to suss out that he might be lying and casually questioned whether Vietnam Airline flies to the UK and UAE.

That jab was so subtle, he actually thought she was asking a serious question.

Nobody calls anybody “dear” that many times

He called Ms Yeoh “dear” about 83 times over the period of one week, at times in a few consecutive messages.

Doesn’t it make you shudder when a random guy calls a girl “dear” online? Talk about sending creepy signals.

While he was consistent with the term of endearment, it visibly faded towards the end of the exchange, when he probably started to realise Ms Yeoh’s gimmick. His tone shifted from warm and caring, to cold and business-like when it came to money.

We all know a money-minded liar when we encounter one.

True love scammers begin losing their charm once they gain a chance at getting their hands on some moo-lah.

If he can send fake photos, she can too

At that point, it became clear that there was something very iffy about Oliver Cheng Li.

There’s no doubt that Ms Yeoh would’ve done her own research and discovered that he stole his pictures from a real person’s profile.

He couldn’t have bought those bouquets of roses just to take pictures of them and not send them over to her. 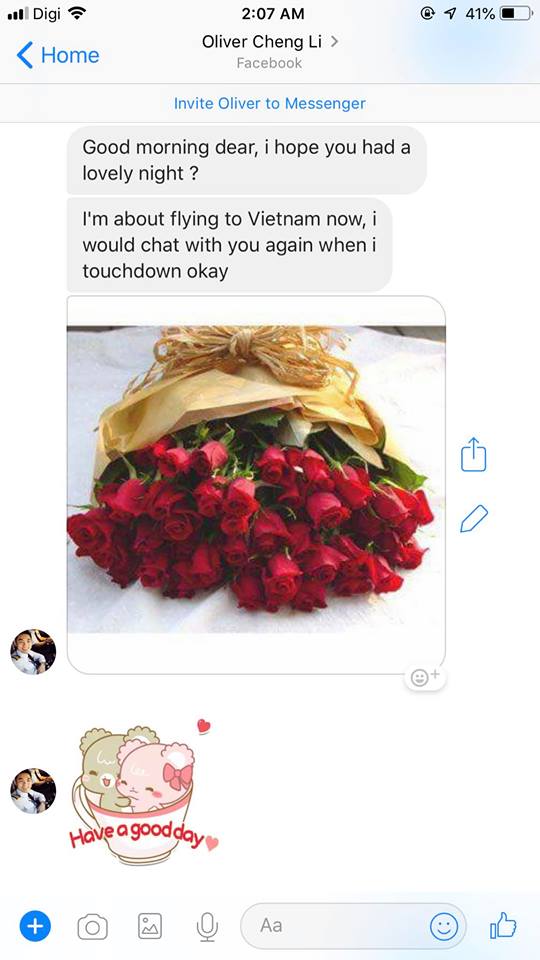 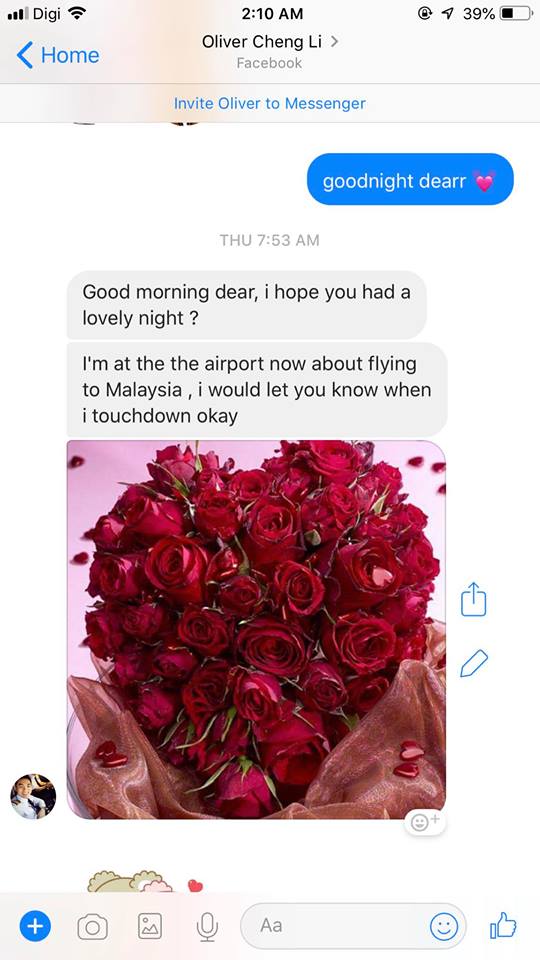 Perhaps to show him that two can play at that game, Ms Yeoh returned the favour and sent him some fake photos too. 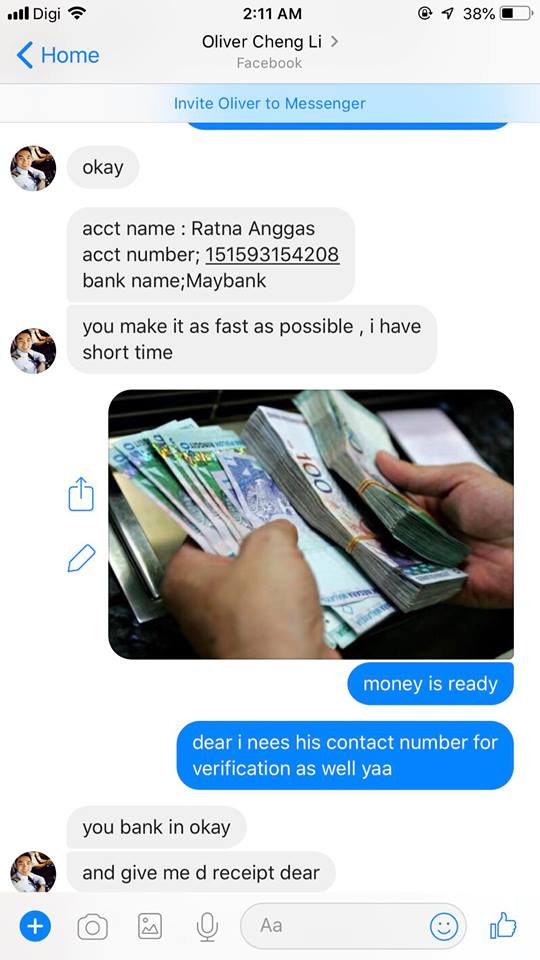 It’s unclear how the scammer realised that her photos were fake too, but a good guess was that he realised he wasn’t receiving any of the cash pictured.

Maybe ‘Oliver’ was quite intelligent after all, but we’re pretty sure this was just his desperation speaking. 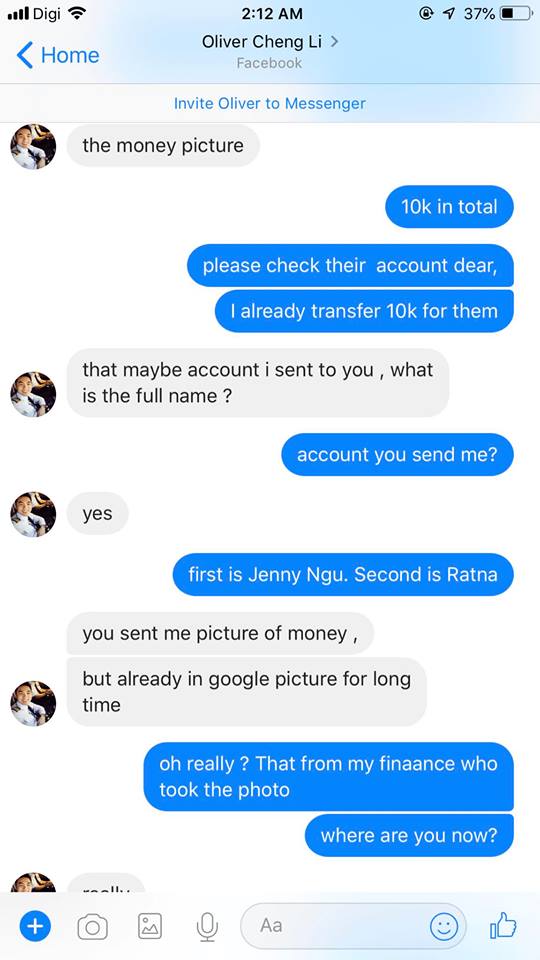 She trolled him subtly, but hard

Many people would resort to spewing vulgarities upon realising someone’s tricking them.

Ms Yeoh, on the other hand, found a less explicit way of directing her crude messages.

She skillfully inserted common Malaysian profanities into harmless topics like people and places she would introduce to him. 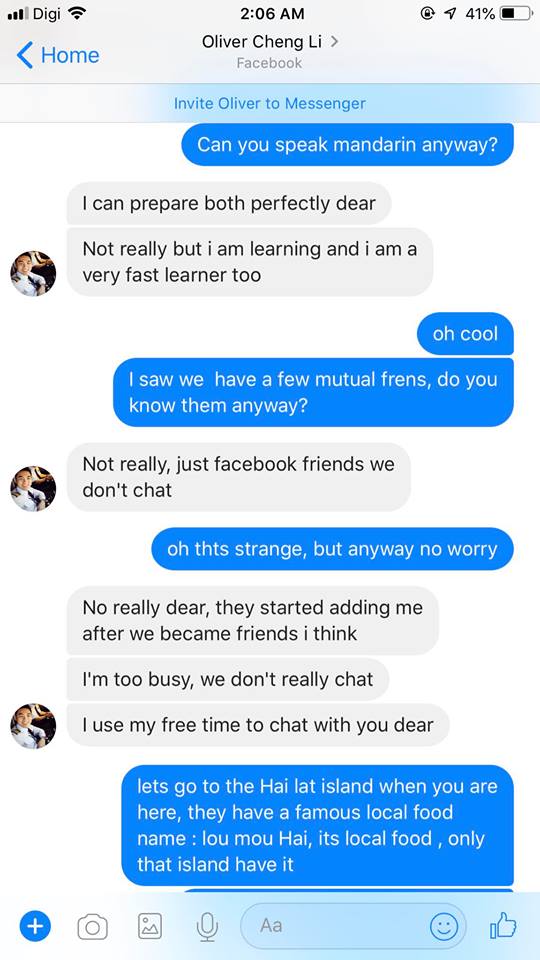 She intro-ed the non-existent “island of Hai Lat” to her scammer.

Many of us know that the Cantonese profanity literally translates to “vagina fall” or “cunt”, but the reference flew cleanly over Oliver’s head.

A famous delicacy she recommended to him named “Lou mou Hai” also means “F*** your mum”.

All that anger sure turned Ms Yeoh into a linguistic genius. 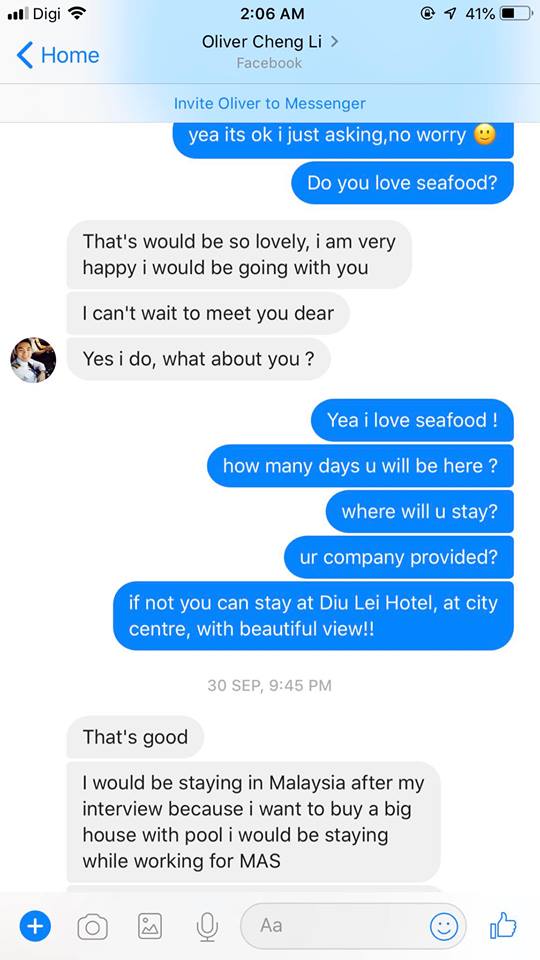 Her assault didn’t end there; nor was it limited to one dialect or language. Ms Yeoh went multi-racial with her next strike by creating a character named “Najis”. 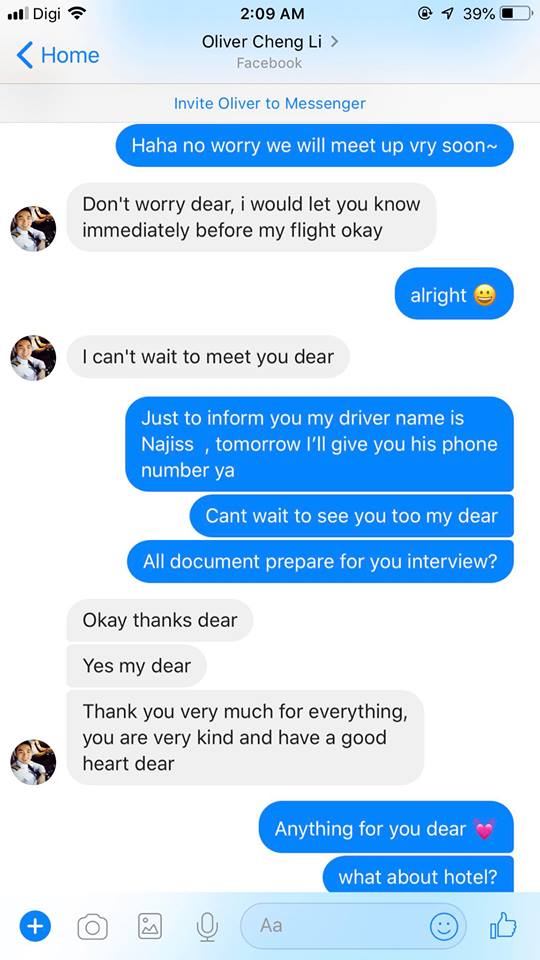 We think her witty insults basically embodied the very idea of diversity.

All good trollings must come to an end

After multiple failed attempts at getting Ms Yeoh to send him money through various means, his messages dwindled and finally stopped coming in at all.

Of course, Ms Yeoh had to have the final word and we couldn’t think of a more fitting way to end the week-long relationship.

He asked for money and she gave him just that, but in hell notes. The scammer may have called Ms Yeoh out for the pictures she took from Google, but she clearly had the last laugh.

Her thoughtful parting words were the icing on the cake,

This is for you dear, take it as much as you can! Be a good human, find a proper job for yourself.

Stay away from scammers

Ms Yeoh’s experience may be amusing, but let’s keep in mind that not everyone may have the restraint to keep the exchanges civil.

If you ever find yourself being the target of a potential scam, avoid going into further conversation with them and report them to the police.

Let’s respect Ms Yeoh’s intention for uploading the conversation — she wants all of us to be aware of the dangers that can be found online.