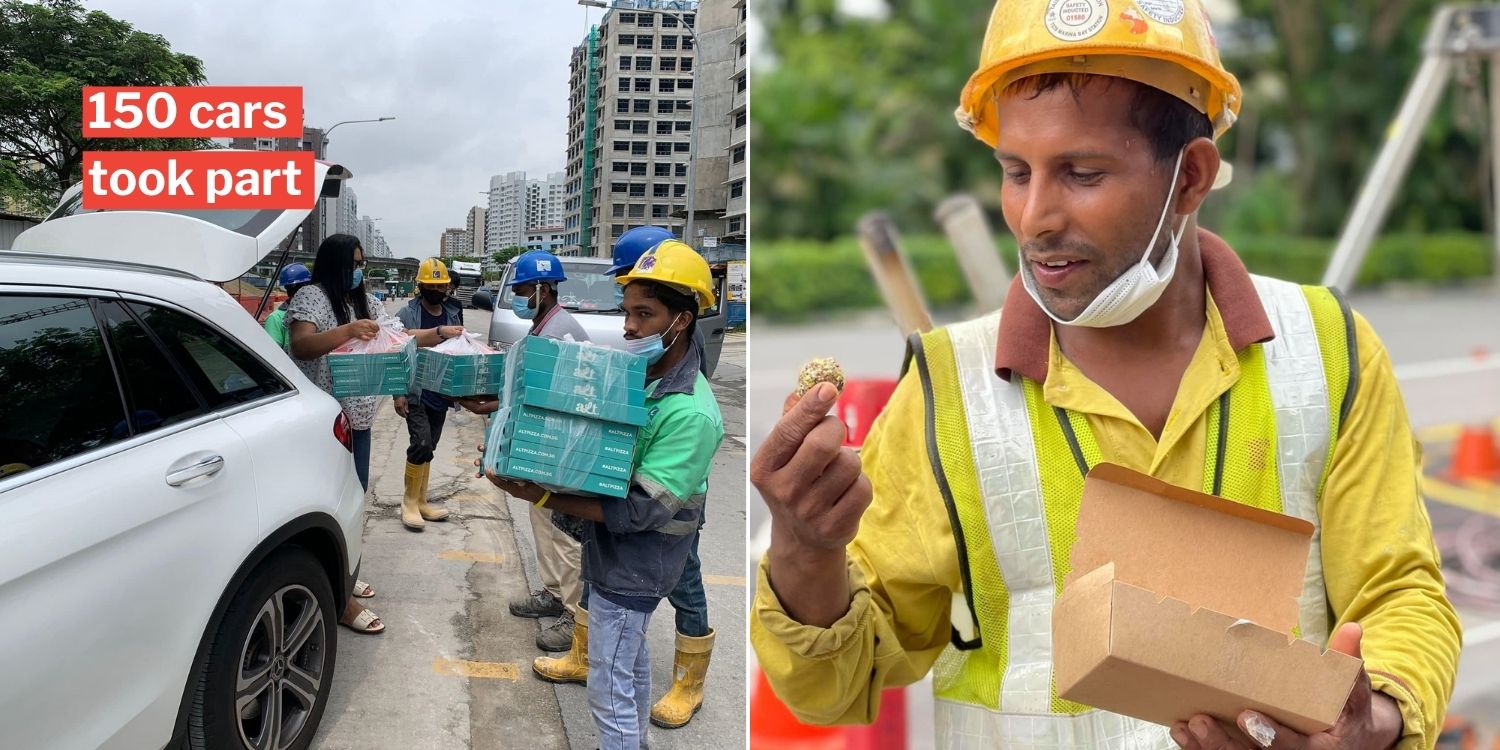 About 1,400 pizzas were sponsored by companies like Pizza Hut.

Food Sent To 10,000 Migrant Workers In Show Of Appreciation

Many Singaporeans celebrated the 1-day Deepavali public holiday last week with their families. But due to circumstances, our migrant workers don’t get to do the same.

The celebrations might seem somewhat bittersweet for them as they’re far away from home. Thus, the least we can do is cheer them up by sending food.

A fleet of cars driven by Singaporeans was thus commandeered to pick up pizzas and other food, sending them to migrant workers across the country. 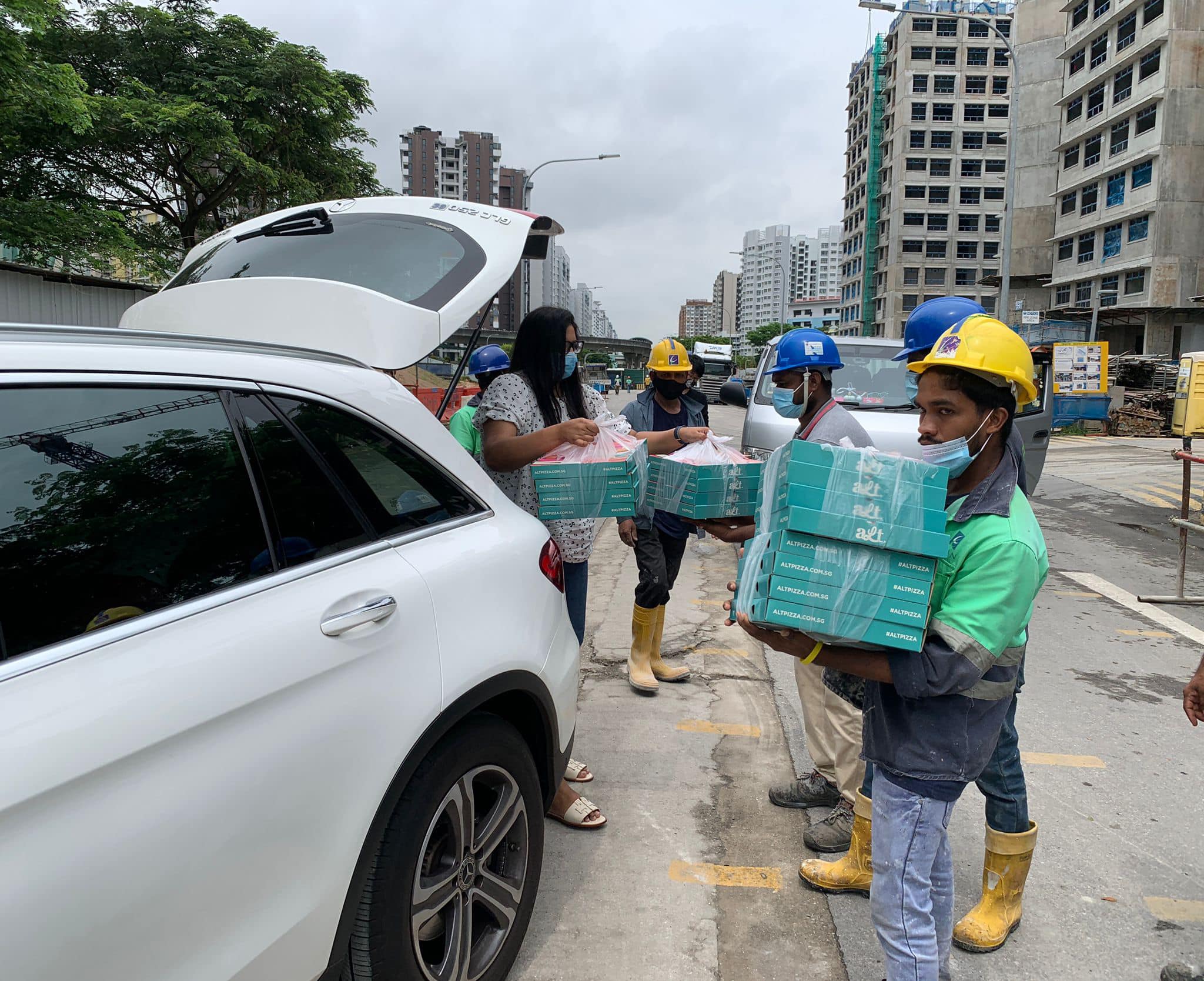 Hopefully, this brought them some much-needed festive cheer.

Event is an annual affair

The “drive & distribute event” on Saturday (13 Nov) was organised by local welfare group ItsRainingRaincoats, which has turned it into an annual affair since 2018.

Ahead of the drive, nearly 18,000 samosas were prepared, along with other food. 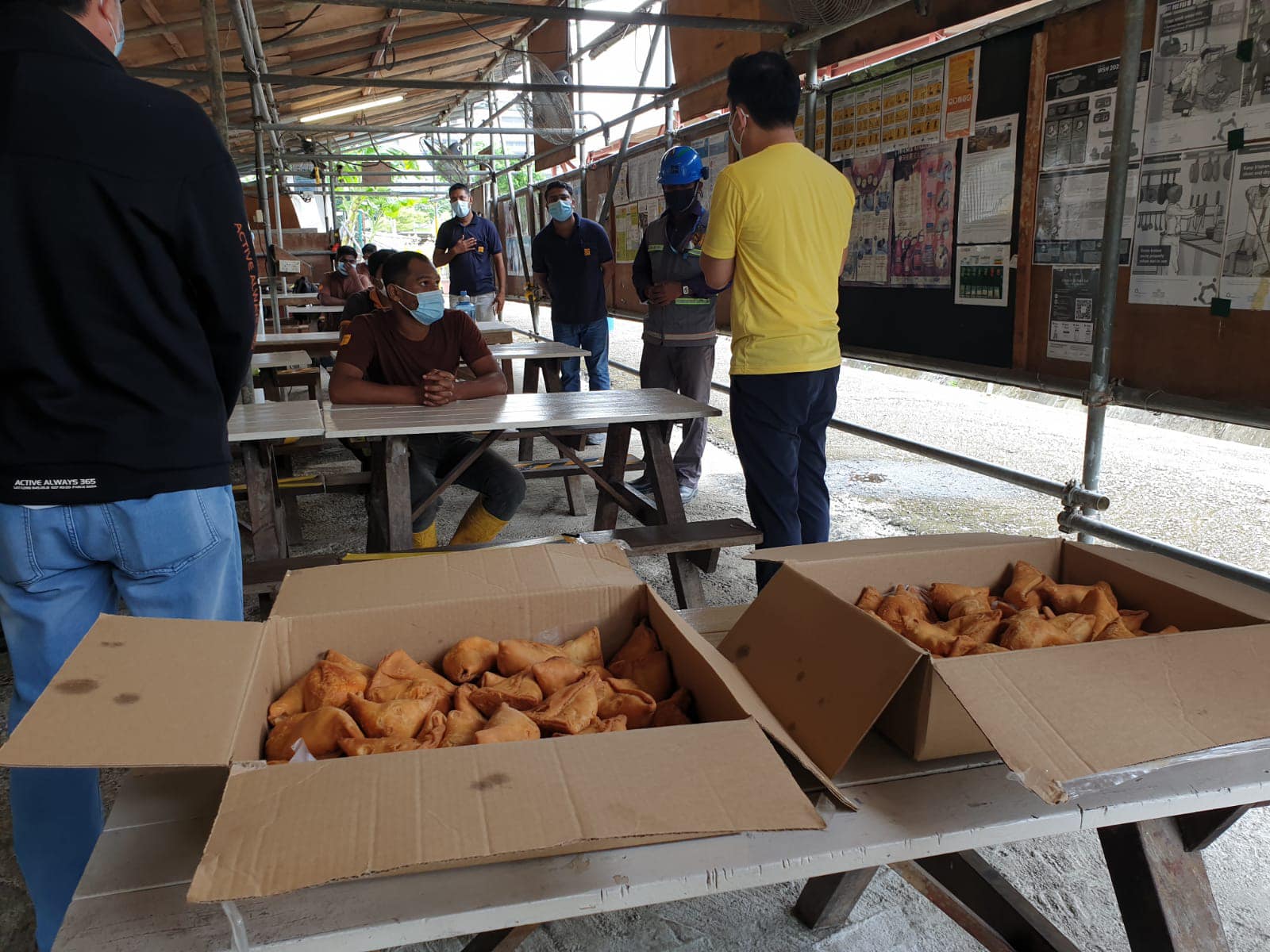 How it works is that people would volunteer to be drivers for the day.

They would then pick up the food and drive to work sites assigned by ItsRainingRaincoats, to deliver the grub to workers.

About 150 cars of volunteers turned up

On Saturday, around 150 cars of volunteers turned up, said ItsRainingRaincoats.

They formed a long but patient queue on Arcadia Road, off Adam Road, to collect the food. 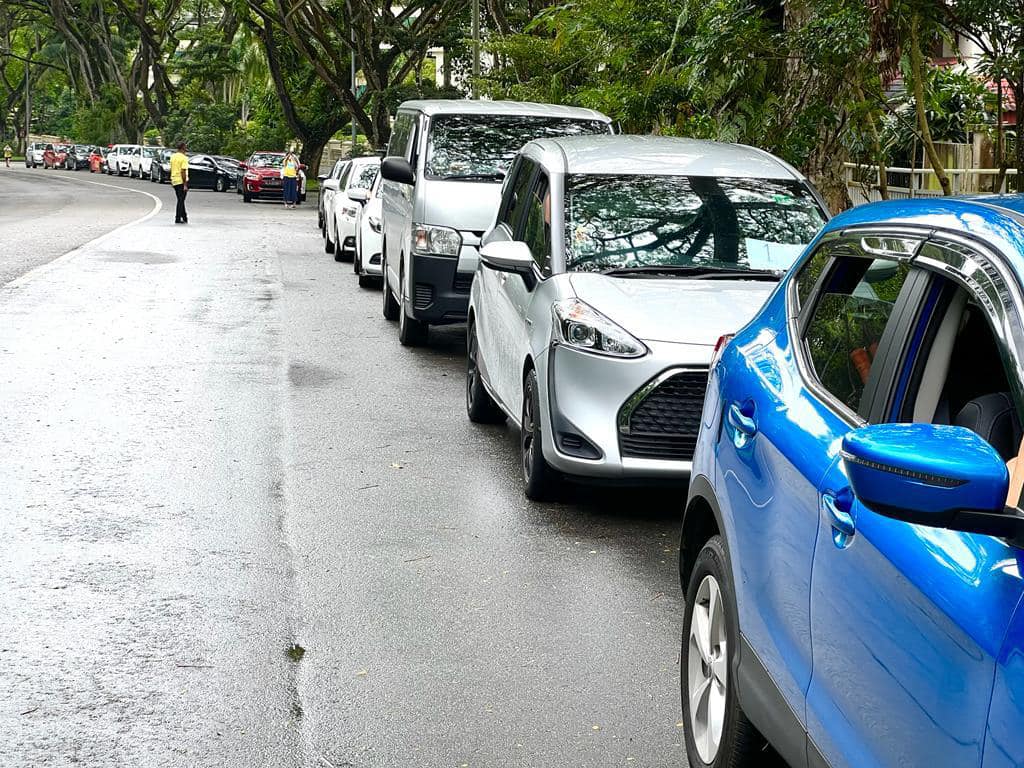 Some cars were even decorated with cheerful Deepavali greetings. Many brought entire families, including children, along to inculcate the spirit of giving in them from young. 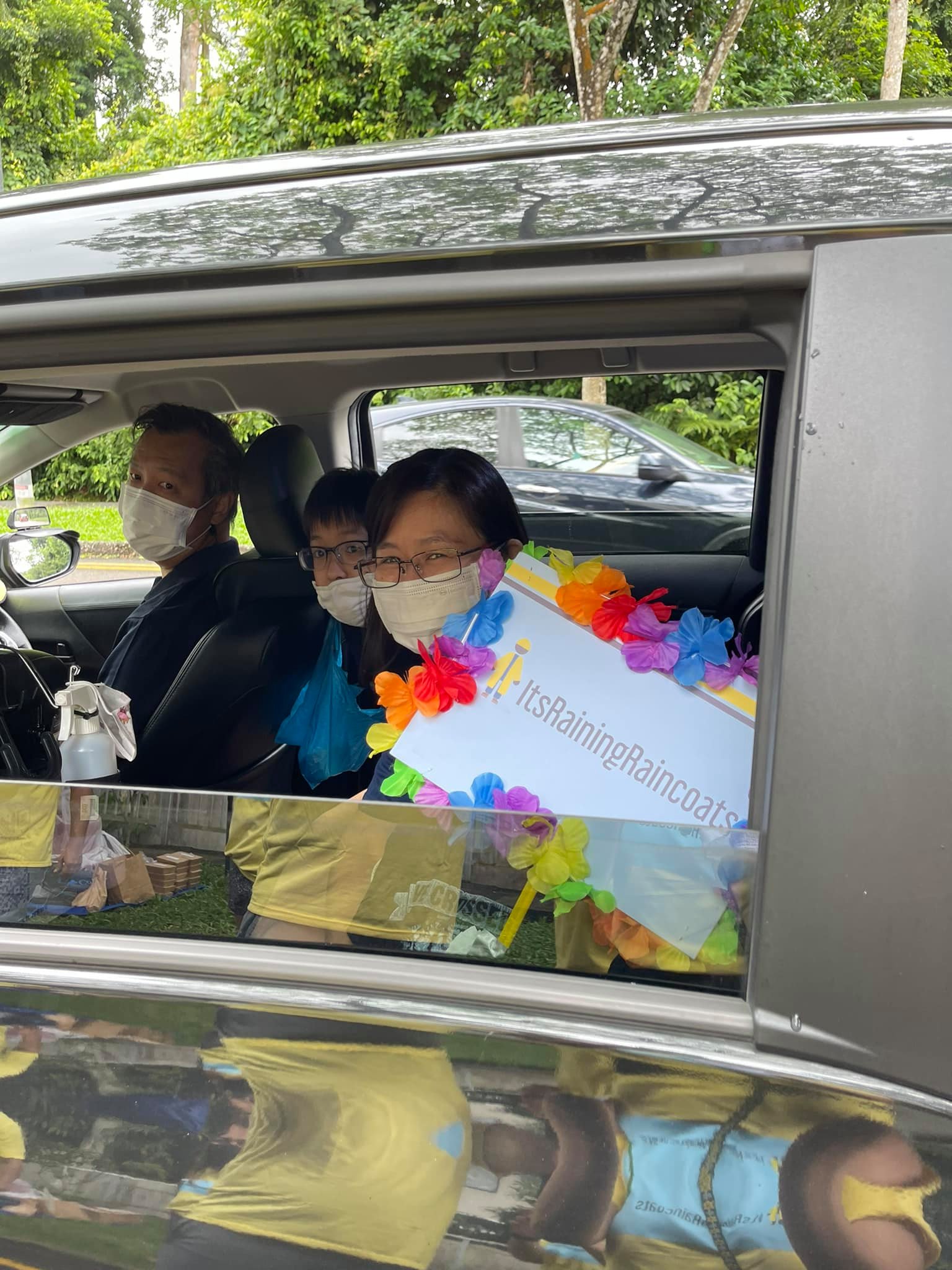 Among the volunteers was Minister of State for Culture, Community and Youth & Ministry of Trade and Industry Alvin Tan, who took part with his family for the 2nd year running. 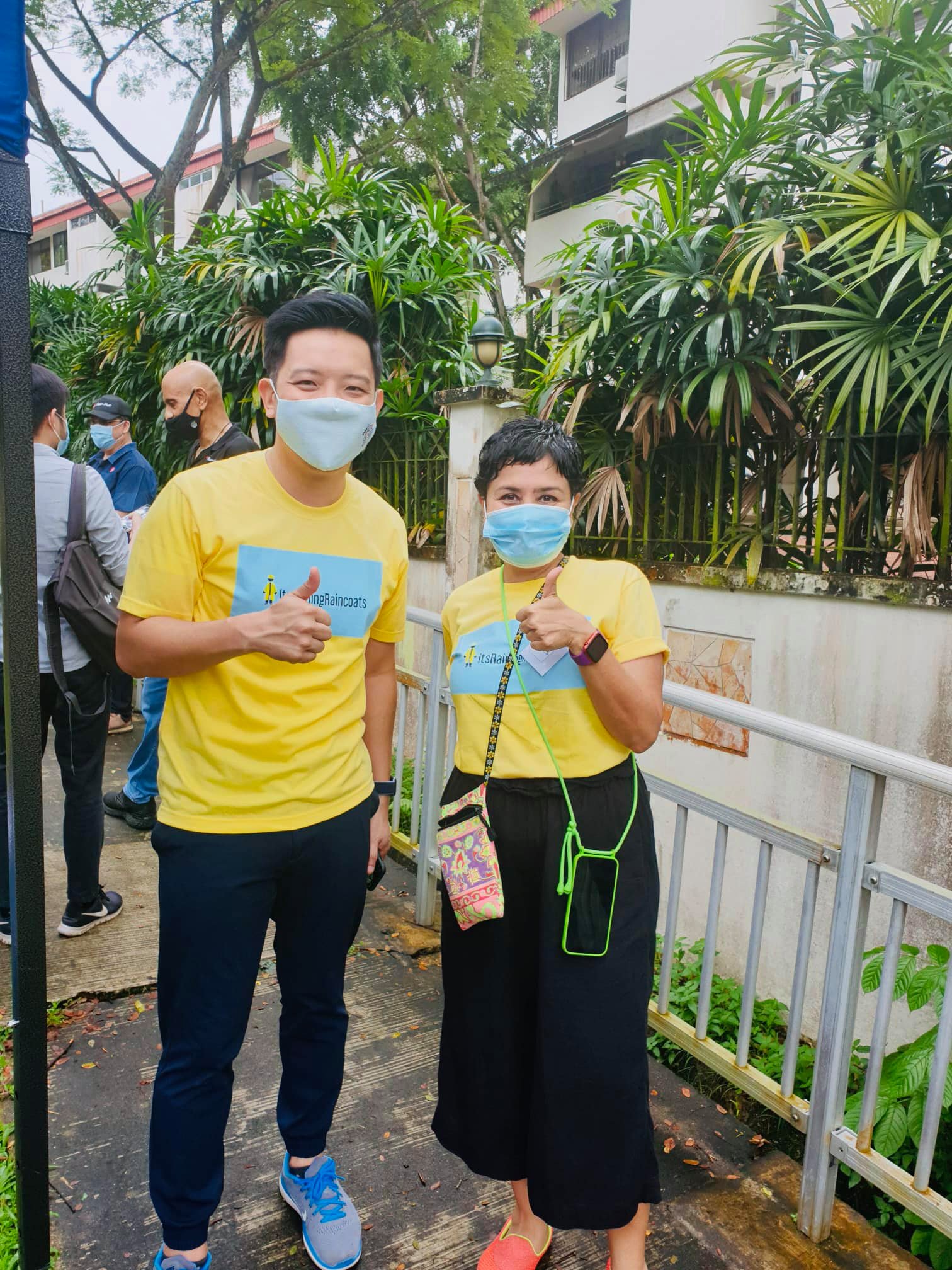 The food the volunteers collected included pizzas—about 1,400 of them donated by companies like AltPizza and Gourmet Ready. 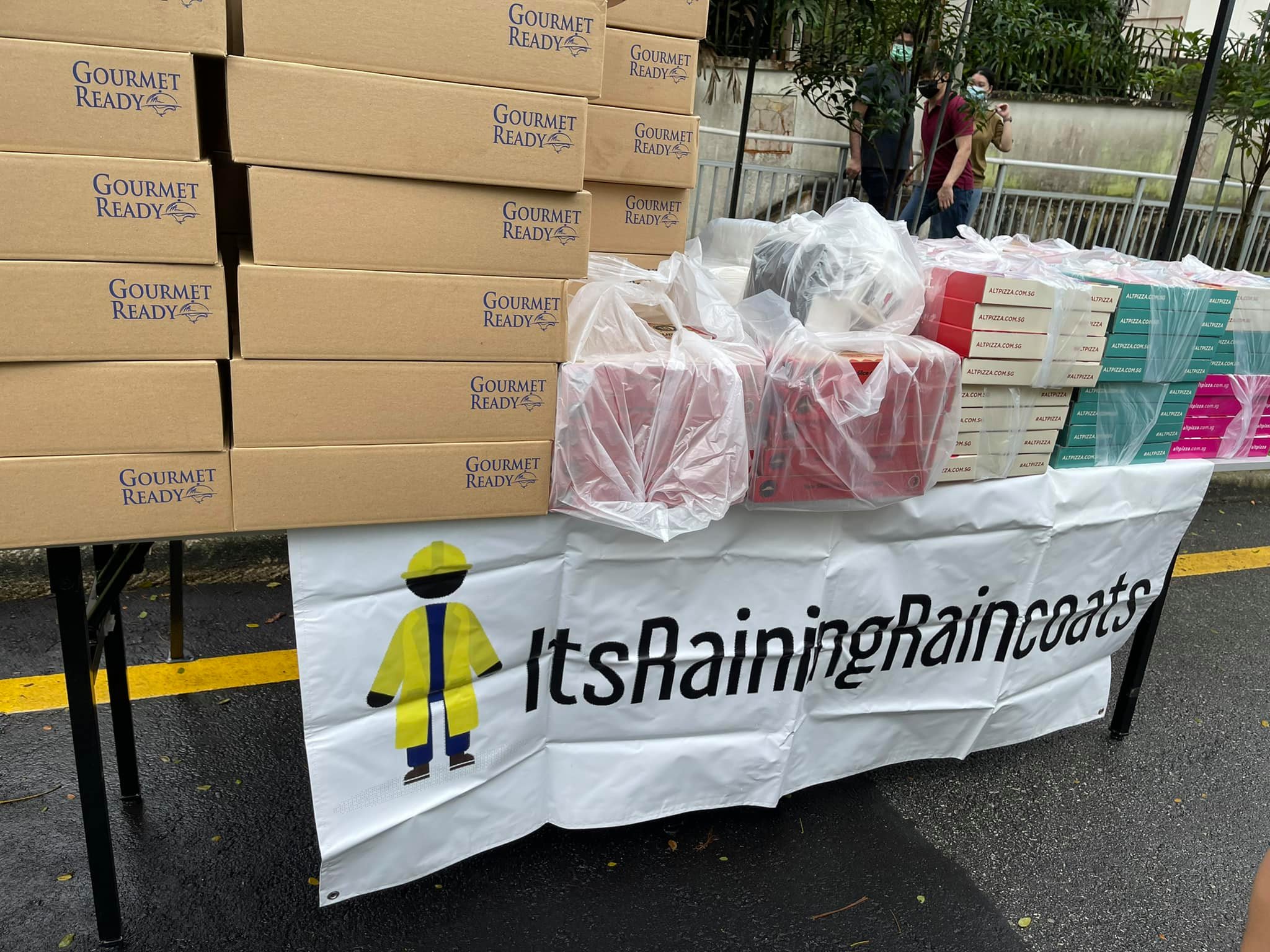 According to Pizza Hut, they donated 1,000 Veggie Lovers pizzas to the effort. They were dutifully picked up by the volunteers to be driven to various work sites. 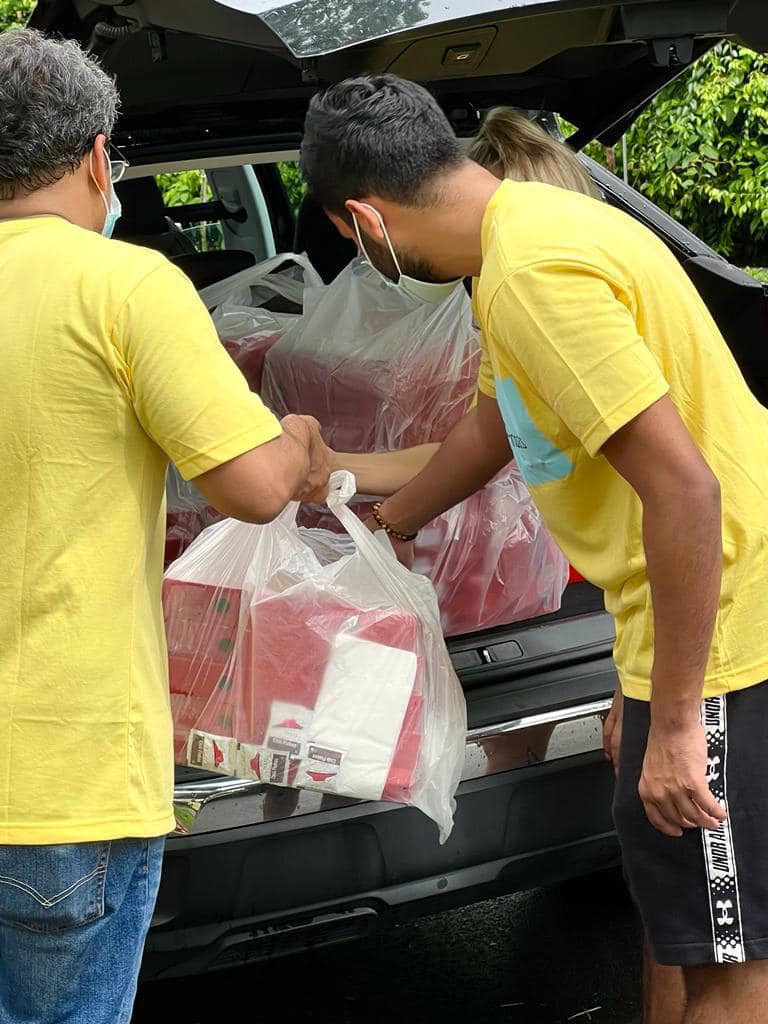 The sight of Singaporeans lugging boxes of pizza on a rainy Saturday for our migrant workers was moving indeed. 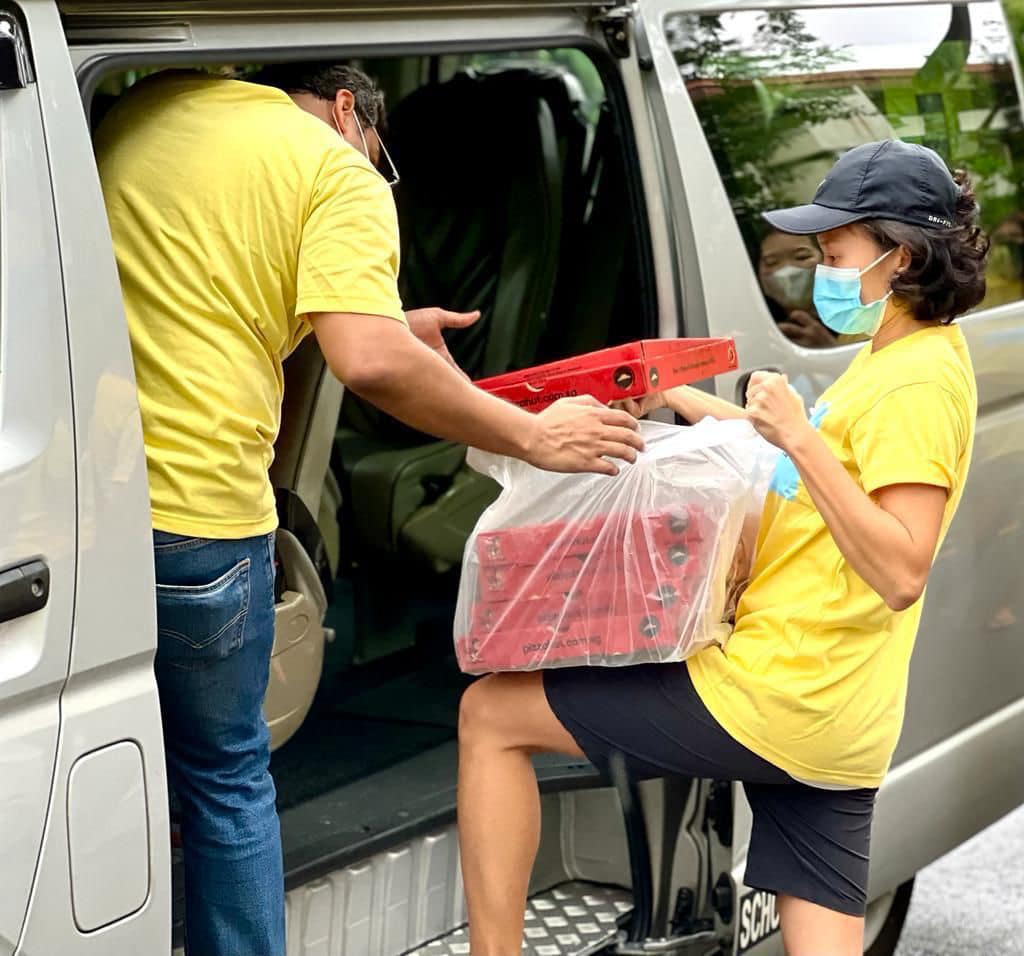 It wasn’t just food, either. Heartfelt messages of appreciation were also prepared to be sent along to the workers. 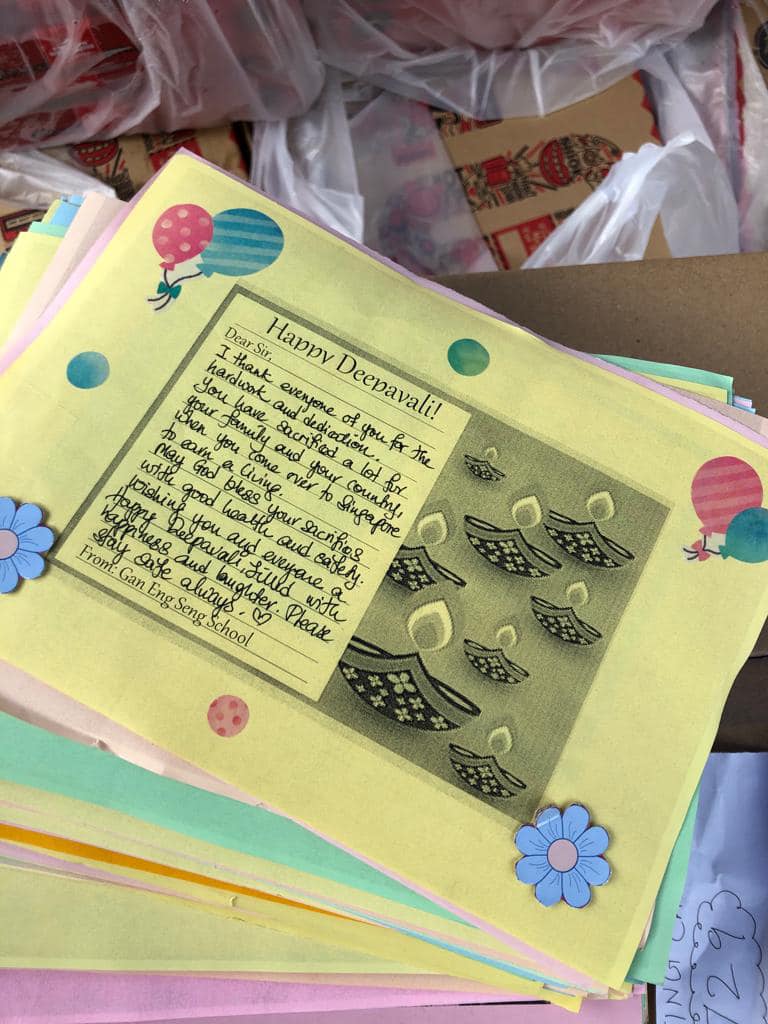 While food quickly disappears down the gullet, these letters will be treasured keepsakes for our migrant workers. 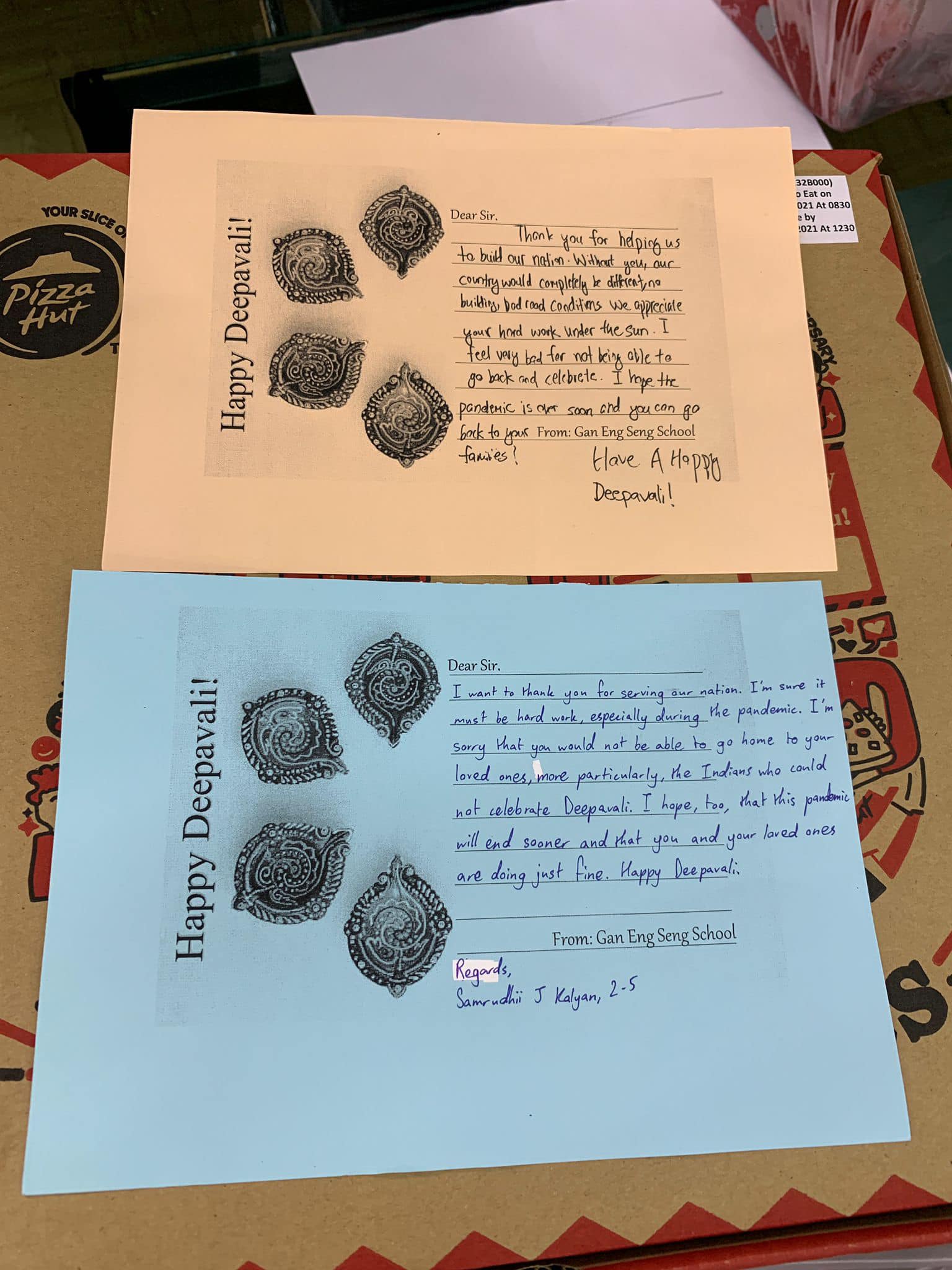 When the volunteers finally gave the goodies to the workers, it must have been a memorable moment indeed, especially for the young ones.

Just seeing the smiles on their faces as they tuck in to their food would be reward enough. 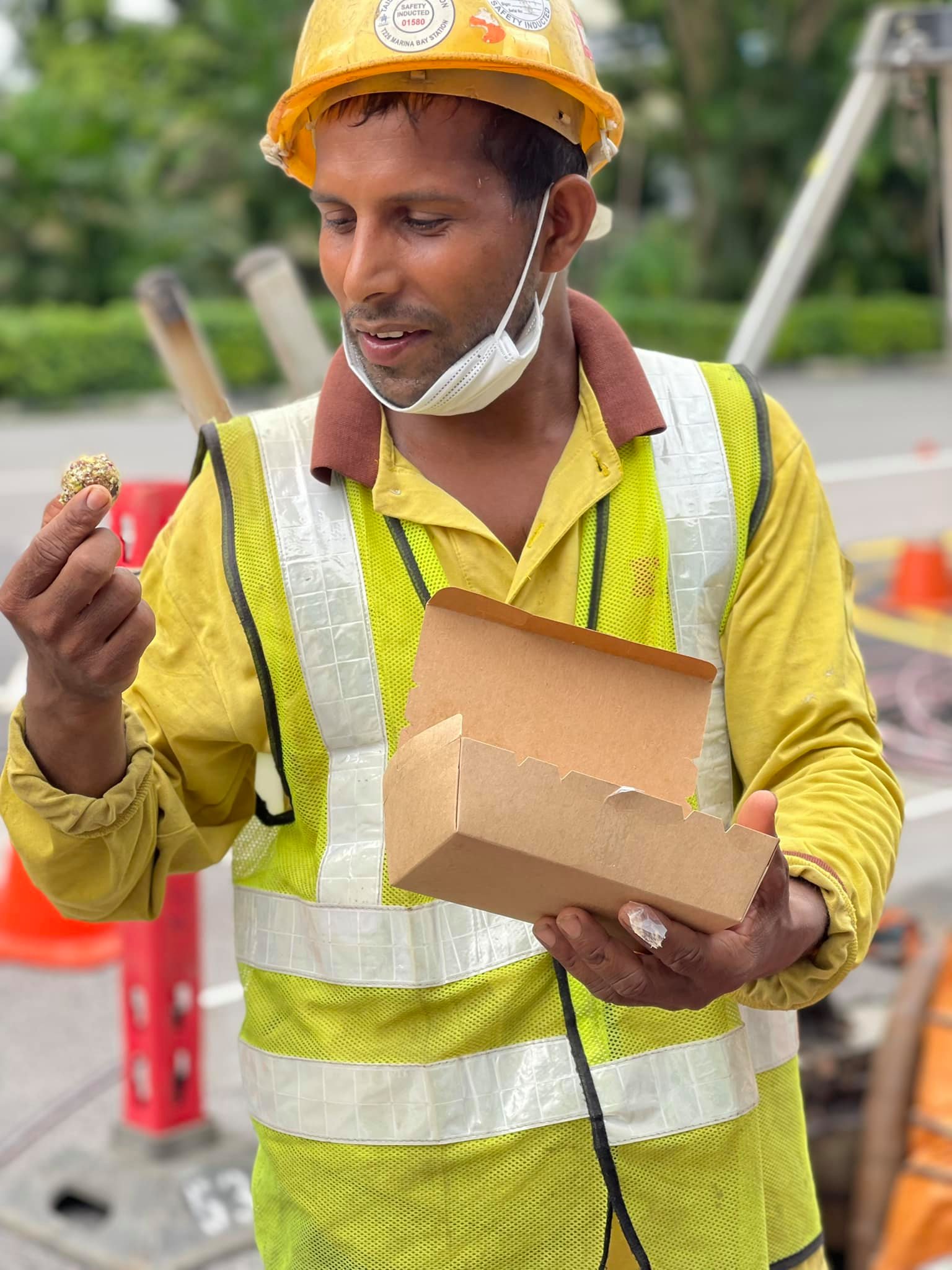 After all, one rarely gets the chance to show appreciation to them in a tangible manner. 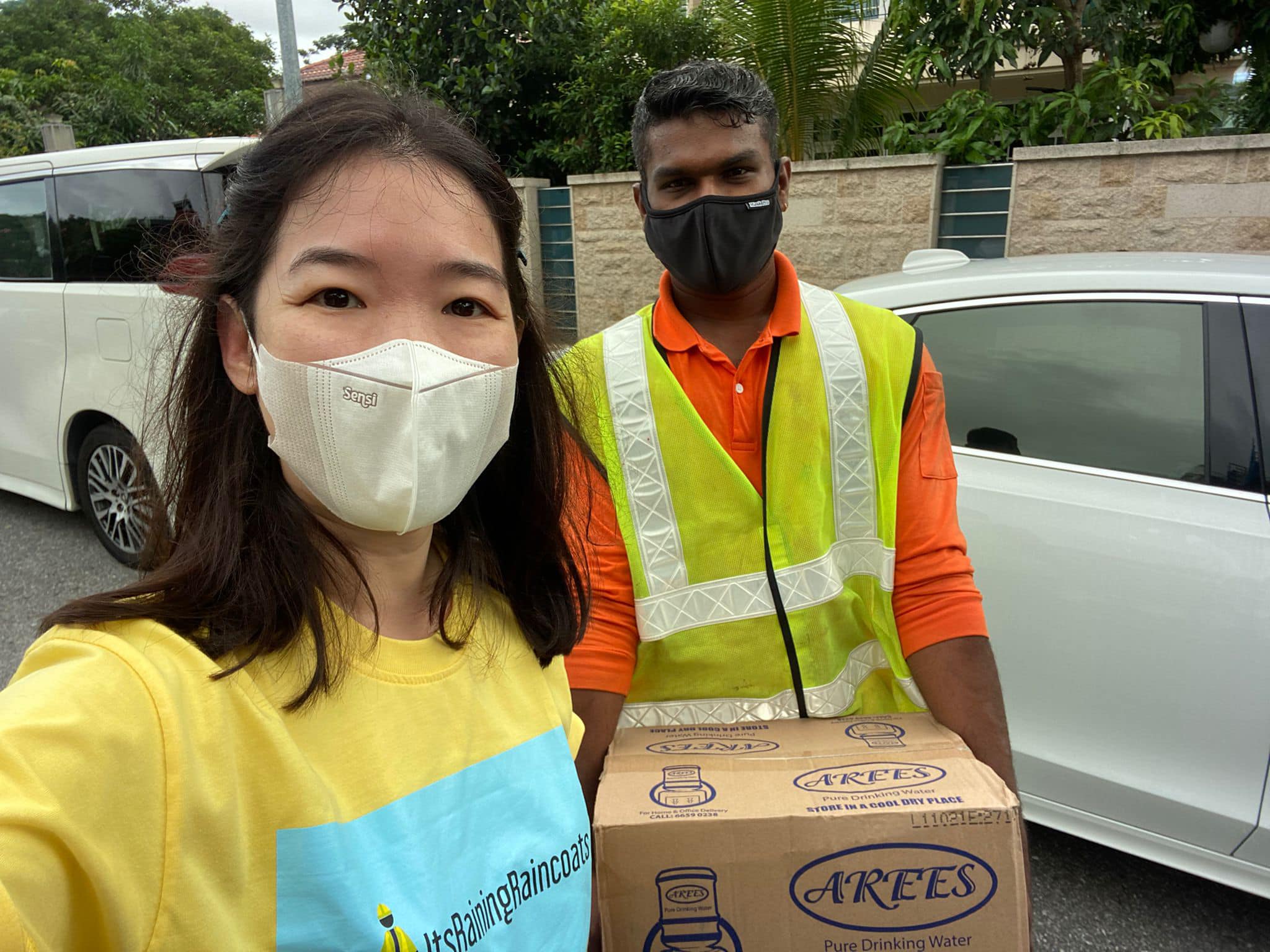 About 10,000 workers were cheered in a single day by the volunteers, said ItsRainingRaincoats – that’s some feat indeed. 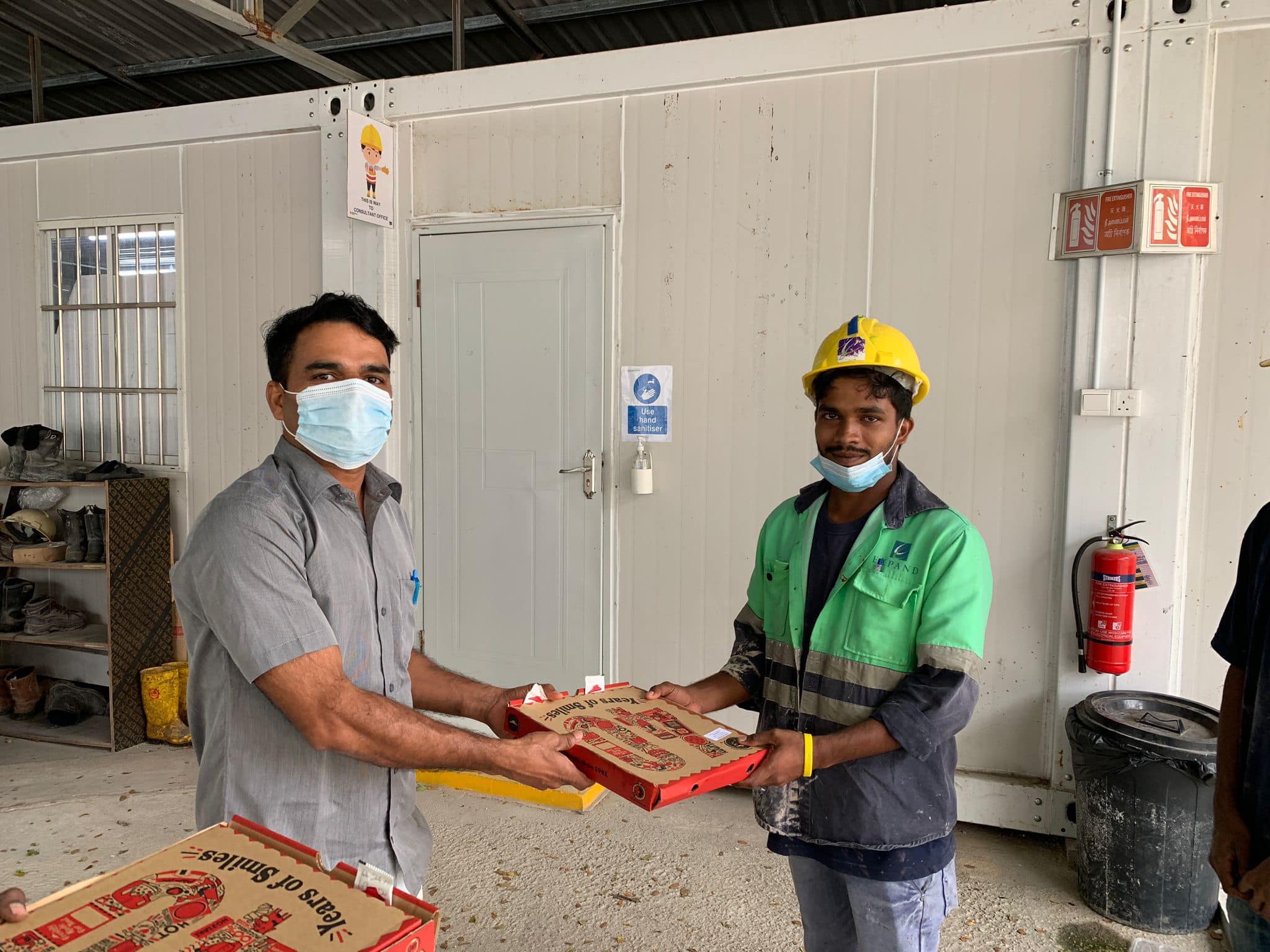 Thus, an event that shows kindness to our migrant workers was a very apt way to celebrate it indeed.

Kudos to all involved

Kudos to all involved in making the event a success – ItsRainingRaincoats, all the volunteers and sponsors too.

It’s not often that we get to show our appreciation to our migrant workers for their uncomplaining hard work.

Hopefully, Singaporeans don’t just wait till Deepavali but will be nice to them in our daily lives too.