There Were Less Than 30 Of Such Complaints In 2017

Just last month, a Singaporean found that 5 strangers were registered under his residential address without his knowledge.

Turns out, that Singaporean wasn’t alone.

On Thursday (2 May), CNA published an article claiming that the Ministry Of Manpower (MOM) has received 489 reports of private addresses being misused as foreign workers’ addresses since Dec 2018.

A drastic increase from 2017

This number is a drastic increase from 2017 where less than 30 of such complaints were lodged.

MOM has reportedly reached out to all these homeowners to rectify their records and has also put in measures to avoid their addresses getting misused in the future.

The Ministry are also investigating all employers and workers involved.

According to CNA’s article, some errant employers deliberately entered false addresses to get around the existing housing requirements.

Some workers who chose to stay in overcrowded units also gave false information to their employers in order to continue staying there.

A minority of cases were found to be the result of “genuine administrative errors” where employers had keyed in wrong addresses.

Since 24 Apr, MOM has issued fines to 19 employers for providing incorrect residential addresses for their workers.

The ministry also revoked the work permits of 13 foreign workers for abetting in their employers’ illegal acts.

Earlier last month, a Singaporean took to Facebook to share his experience after he found that 5 foreign workers were falsely registered under his home address.

He was worried that his house address might be used for illegal activities and promptly lodged a complaint with MOM. 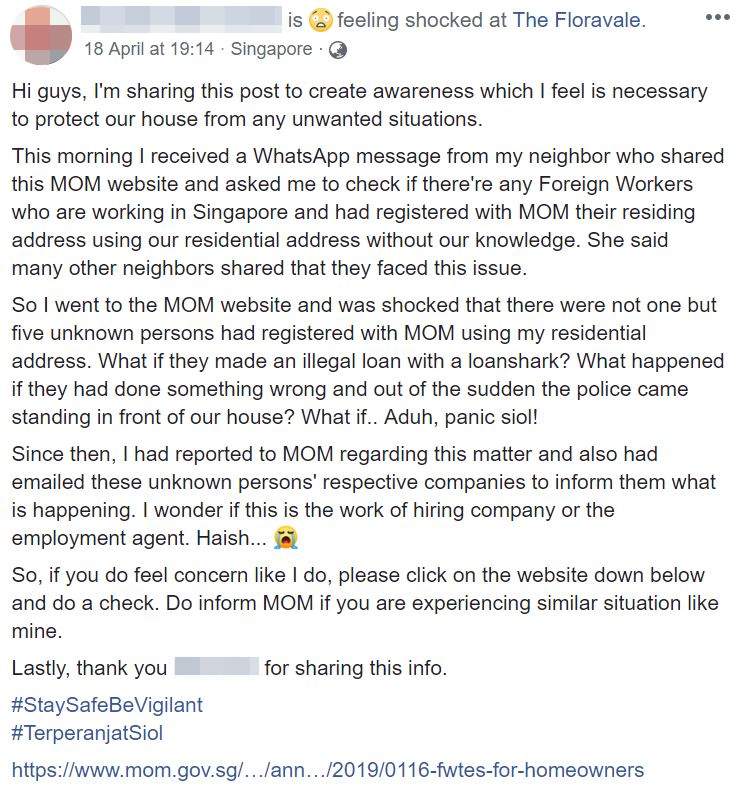 Check if your address has been misused

Homeowners who are keen on checking if their addresses have been misused can do so via MOM’s website here.

Meanwhile, we hope that the ministry will take a firmer approach against such acts, and will introduce stricter punishment to prevent similar occurrences in the future.