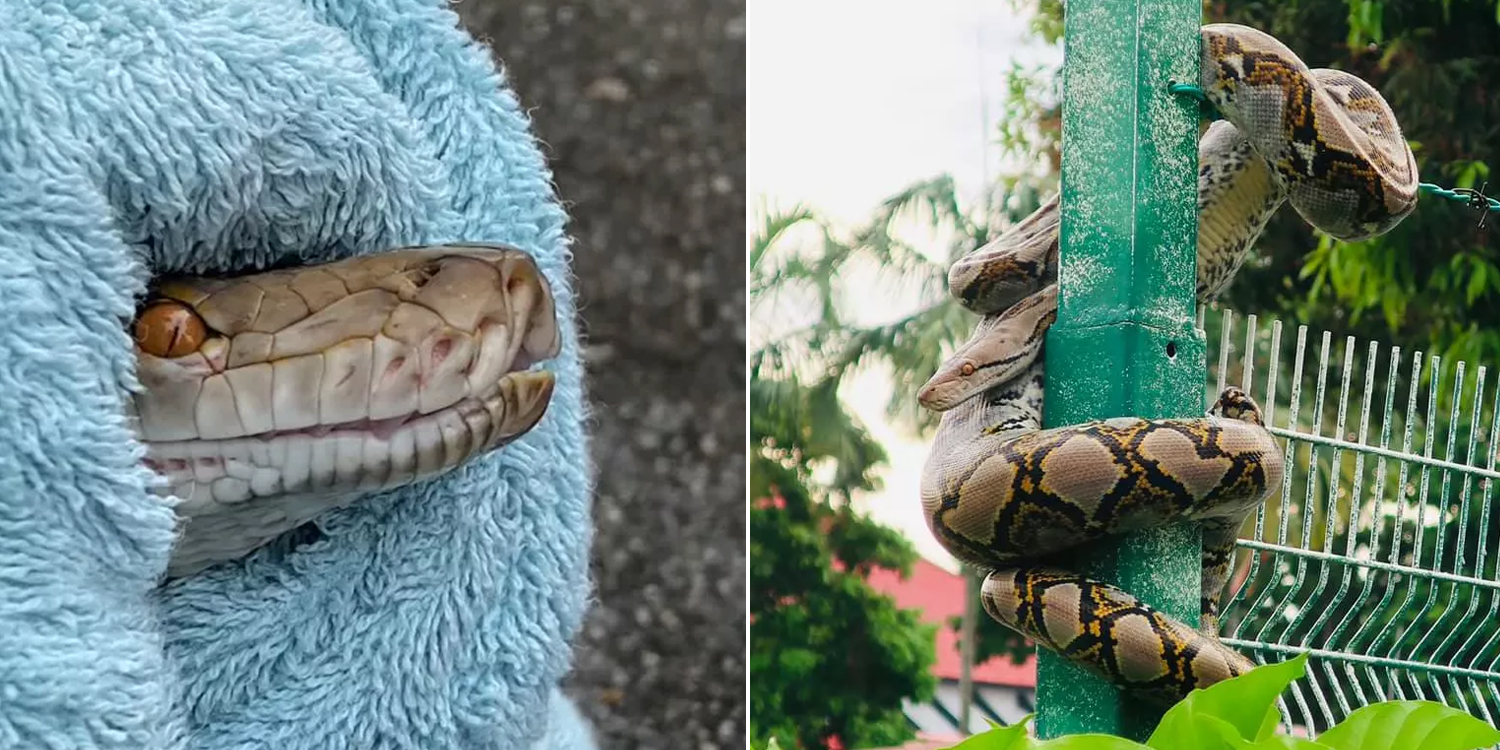 Yesterday, we reported about a huge python coiled around fencing near Downtown East in Pasir Ris.

ACRES officers subsequently arrived at the scene and removed the snake from the metal pole.

Later that day, more footage of the ACRES operations was shared on Facebook. In one video, the python appears to be wrapped snugly in a towel, almost as if it’s at a spa. According to a post by Mr Kumar in the Singapore Hikers Facebook group, the snake was seen outside Aranda Country Club, near Downtown East in Pasir Ris. 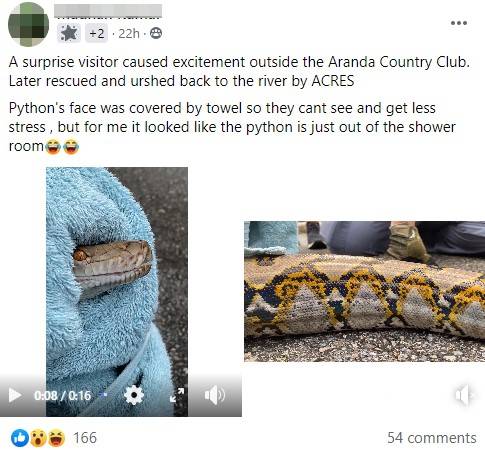 In one clip, the python’s head was seen wrapped with what appears to be a piece of soft blue towel, almost as if it’s at a relaxing spa. 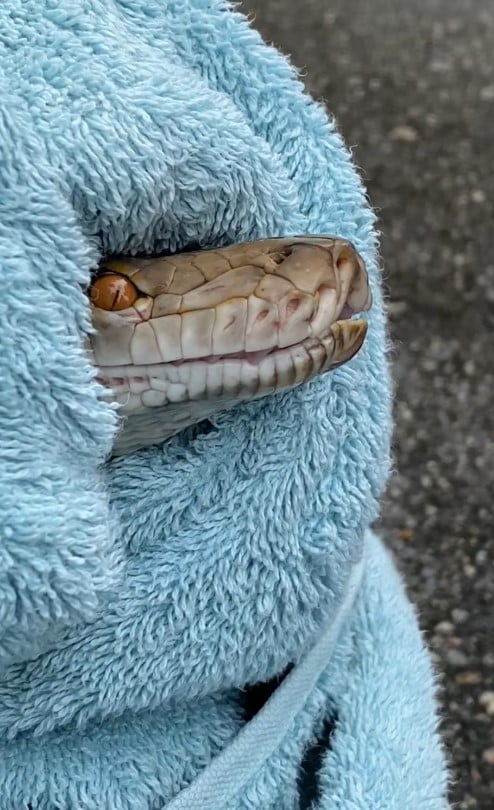 The only thing missing here is a face or eye mask.

The other video zoomed in on the majestic hexagonal pattern on the python’s body. 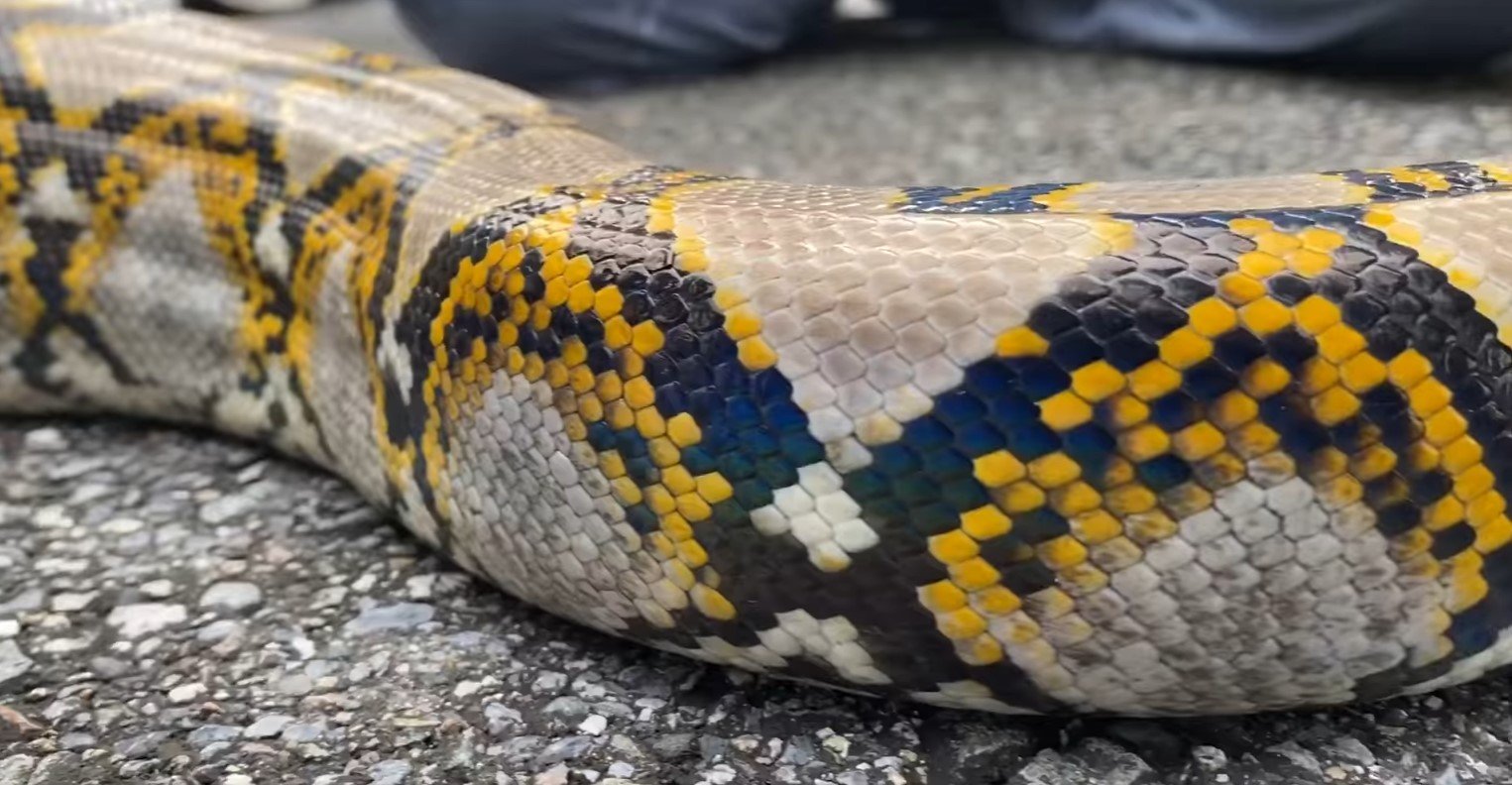 Wrapping snakes with towel prevents them from getting agitated

According to Mr Kumar, wrapping the reptile with a towel obstructs the snake’s vision and prevents it from getting agitated.

Perhaps that’s one reason why snake experts tend to place serpents in an opaque or translucent bag before transporting them. 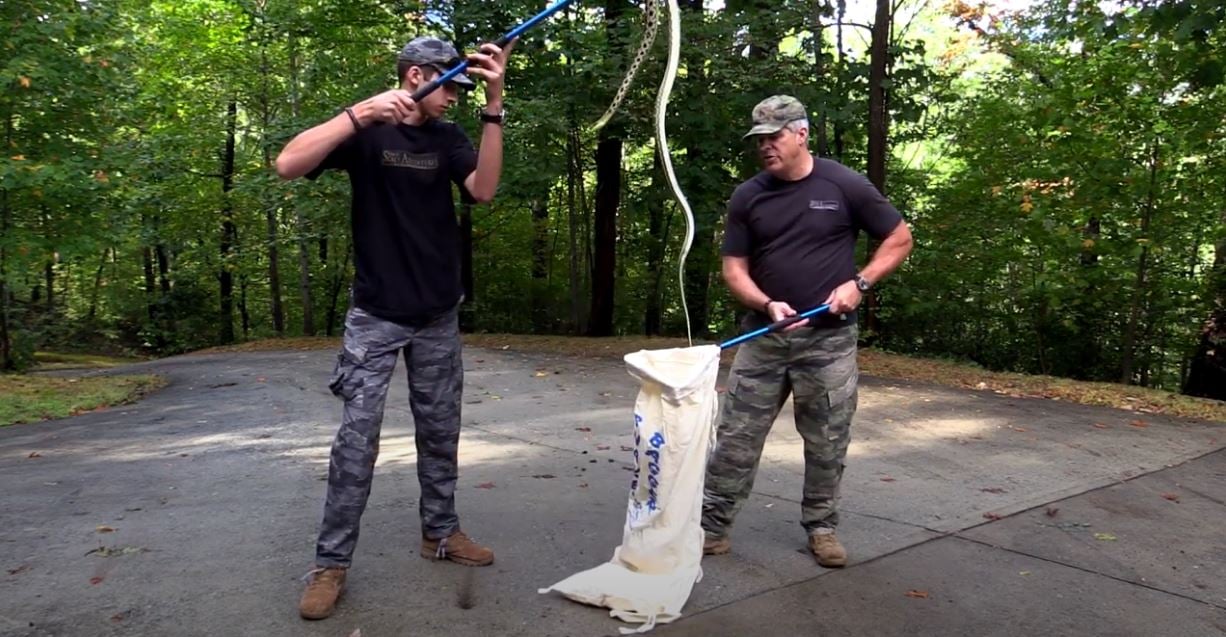 While this might be a great tip when dealing with snakes, NParks advise members of the public to avoid handling such reptiles and to contact an expert.

In case you missed yesterday’s news, here’s a recap: The python was first spotted in Pasir Ris on Wednesday (31 Mar) morning. 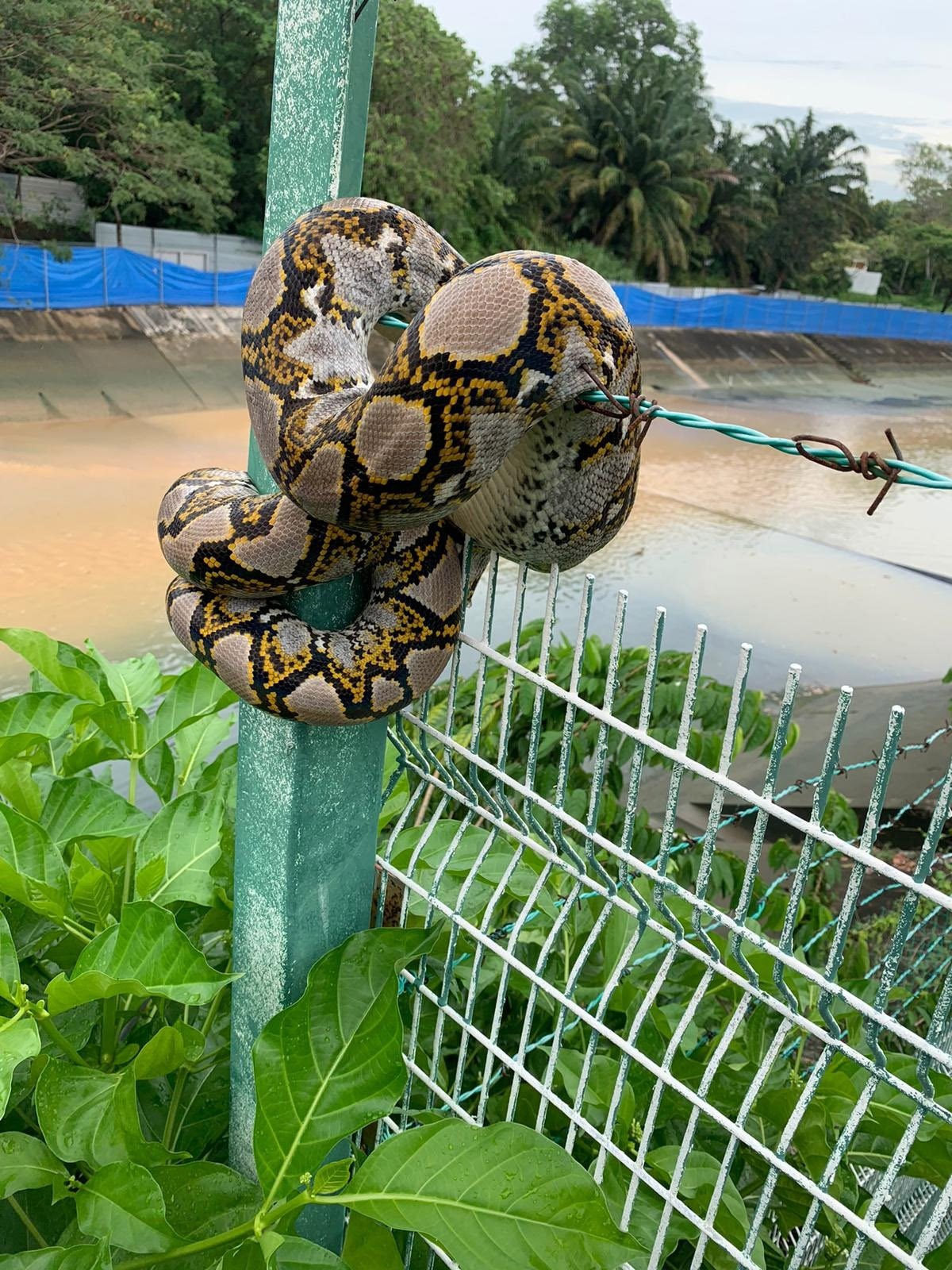 The massive snake was seen coiled tightly around a metal fencing with part of its body on a section of barbed wires. 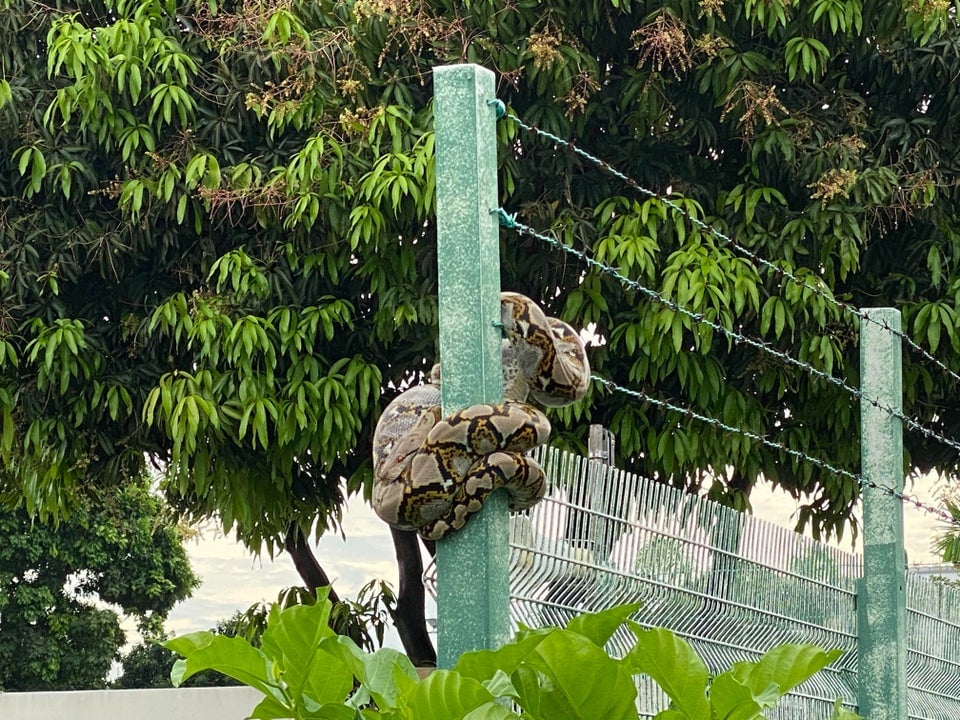 ACRES officers later arrived at the scene and dealt with the situation. 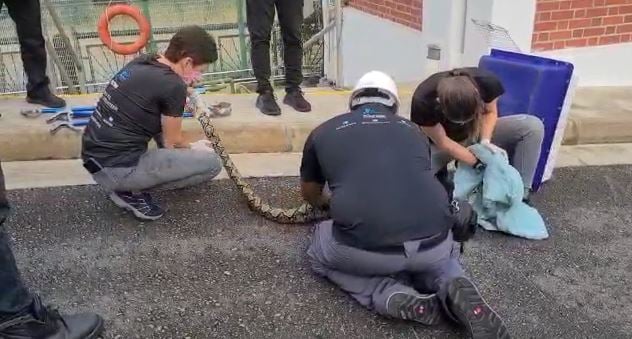 Though seeing a snake wrapped up in a blue towel is no doubt cute, remember not to get too close in the middle of a rescue operation, so that the experts can swiftly do their job.

A huge thank you to ACRES for arriving at the scene and promptly dealing with the snake.